Cystic Lymphangioma of the Breast: A Case Report in an Adult Woman | OMICS International

Cystic Lymphangioma of the Breast: A Case Report in an Adult Woman

Copyright: © 2017 Almohawes E, et al. This is an open-access article distributed under the terms of the Creative Commons Attribution License, which permits unrestricted use, distribution, and reproduction in any medium, provided the original author and source are credited.

Cystic lymphangioma, also known as cystic hygroma, is a rare benign congenital malformation of the lymphatic system [1]. It is a vascular malformation rather than a true neoplasm, and this lesion is believed to be the result from failure of the lymphatic system to connect with the venous system [2-4]. Possible etiological factors include Blockage of the lymphatic channels with resultant secondary dilatation, congenital weakness of the lymphatic wall or proliferation of lymphatic vessels [3]. It may be associated with other anatomic and/ or chromosomal abnormalities [1]. More than 90% of cystic hygroma cases are diagnosed by the age of 2 years, in more than 90% of cases the lesion is located in the neck or axilla [1,5].

A 39 years old woman, not known to have any medical problem, presented with a history of gradual increase in the size of her right breast over duration of 9 years, associated with fullness in the right axilla. Her past medical history is negative.

On physical examination, she had a soft non-tender mass replacing the completely right breast and extending to the axilla. No associated nipple retraction or discharge and no changes in skin color (Figure 1). 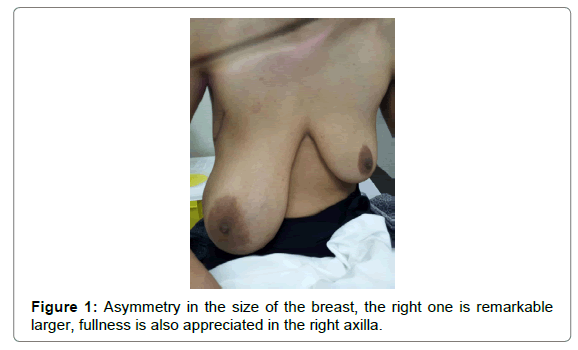 Figure 1: Asymmetry in the size of the breast, the right one is remarkable larger, fullness is also appreciated in the right axilla.

Radiological investigations were performed, including mammogram, ultrasound and CT scan. On mammography, there are numerous partially circumscribed high density round masses involving the completely right breast and extending to the axilla (Figure 2). Focal similar appearance is seen at the contralateral left axillary tail region. Sonography revealed multiple loculated anechoic cysts; some of which shows septa, no associated solid nodules (Figure 3). Complementary CT scan of the chest was performed to assess the full extension of the lesion and showed low attenuation lesion similar to fluid seen in the right sub-pectoral region, extending to the right axillary tail with similar but less extensive appearance in the left axillary tail (Figure 4). 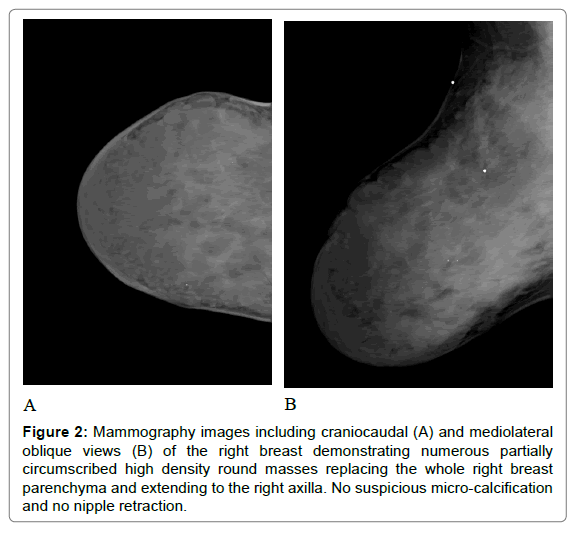 Figure 2: Mammography images including craniocaudal (A) and mediolateral oblique views (B) of the right breast demonstrating numerous partially circumscribed high density round masses replacing the whole right breast parenchyma and extending to the right axilla. No suspicious micro-calcification and no nipple retraction.

Figure 3: Ultrasonography images of the right breast (A and B) showing multiple lobulated anechoic cysts with posterior acoustic enhancement; some of which shows internal septa, no associated solid nodules. (C) Similar appearance at the right axillary tail, with no color flow supporting its cystic nature. Figure 4: Selected images from computed tomography of the chest (A). Scout view is demonstrating the asymmetry in breast sizes; the right one is remarkably larger than the left (B). Low attenuation lesion in the right sub-pectoral region, extending to the right axillary tail with similar but less extensive appearance in the left axillary tail (C). The whole right breast parenchyma is replaced by low attenuation lesion (D).

Diagnostic vacuum-assisted biopsy of this right breast mass was performed under sonographic guidance (Figure 5), without total aspiration of the lesion. Cytological examination confirmed the diagnosis of breast lymphangioma (Figure 6). Figure 6: Lymphangioma cytological analysis (A). This is a low power magnification of the received stereotactic breast biopsy, it shows dilated vascular spaces within the breast fibro-adipose stroma (Hematoxylin a and Eosin, X40) (B and C). The vascular spaces are empty and lined by flat and bland endothelial cells. Two ducts are noted in figure c with myoepithelial hyperplasia (Hematoxylin a and Eosin, X100) (C and D). D2-40 immunohistochemical stain showing a cytoplasmic positive staining of the endothelial cells. Thus, confirming the lymphatic nature of the dilated vascular channels (D2-40, X100 and X200, respectively).

Cystic lymphangioma of the breast in an adult woman is extremely rare, only few cases were reported in the literature. Less than 20 cases had been reported in the last 40 years [6-9]. Some authors consider lymphangioma as a true neoplasm that exert local aggressive behavior, but overall it is considered as a benign disease [7]. On the other hand, other authors believe that lymphangioma is a hamartomatous malformation resulting from the inability of the lymphatic system to communicate with the venous system. Another closely related opinion is that lymphangiomas are sequestered lymphatic tissue which had failed to communicate with the lymphatic channels [6,7]. Considering the latter described two opinions, fluid will accumulate in this abnormal lymphatic tissue, resulting in its cystic appearance [6-8]. Lymphangioma is considered mostly as a benign, slow growing disease that usually has low malignancy potential, however, malignant transformation into squamous cell carcinoma after long standing lymphangioma circumscriptum has been reported [9].

Considering the proposed etiology for this disease, resulting in failure of communication with the main central lymphatic ducts; explaining their tendency to occur along the lymphatic drainage routes, being directed towards the axilla [2,5,7]. Such localized lesions in the breast are usually located in the upper outer quadrant, tail of Spence or sub-areolar space [5]. However, one case report documented a rare histologically proven cystic lymphangioma in the upper inner quadrant of the breast [9]. Secondary lymphangioma developing post mastectomy and irradiation of the chest wall has been described [10,11].

The previously documented cases of breast lymphangioma in the literature showed variable sizes that range from 3 to 25 cm [7]. Lymphangioma can be diffuse and/or multi-centric (lymphangiomatosis) [1]. They can be located in the soft tissues only, or can extend to involve other locations like the bone and the viscera [1]. Around 70% of lymphangiomas occur in the neck region, 20% in the axilla, while the remaining 10% is reported in the abdominal organs, retro peritoneum, skeleton, scrotum and, very rarely, in the breast [1,7].

Lymphangioma is usually an asymptomatic smooth mass. However, rapid expansion can occur because of hemorrhage into the cyst, inflammation or trauma. Patients usually present clinically with rapidly enlarging mass that show no other local alterations. Physical examination and palpation would reveal a well-defined, painless, smooth and mobile mass [1].

Investigation is performed using radiological examinations, including mammogram, ultrasound and other cross sectional imaging if needed. On mammography, breast cystic lymphangioma show round-shaped or lobulated densities [2]. However, the mammographic findings are non-specific as many of the cases occur high in the axilla, rendering its visualization on mammogram difficult. While on sonography, it appears as a multiloculated cystic mass with variable sized septations that contain solid components arising from the cyst wall or septa [2,10]. Some authors suggest that when the lymphatic ducts in cases of lymphangioma are prominent on ultrasound, appearance can resemble duct ectasia in an accessory breast tissue, however, upon compression by the transducer, lymphatic ducts in lymphangioma will be totally collapsed while it will not be affected by compression in cases of duct ectasia related to accessory breast. In one case report, cavernous lymphangioma showed complex echoic speculated mass, mimicking malignancy, Ko et al. attributed the appearance to the tiny size of the lymphatic ducts being closely related to each other giving an appearance of a solid mass, with surrounding fibrosis and prominent fibro-collagenous stroma giving the speculated appearance [8,10].

Magnetic Resonance Imaging (MRI) is proposed to be the best modality for the diagnosis and evaluation of lymphangioma extension [8]. Cystic lymphangioma appear as multiseptated masses on MRI, usually following the signal intensity of fluid, showing low signal intensity on T1 and high signal intensity on T2, with enhancement of the septa. However, appearance of the cystic fluid content can be variable depending on the presence of hemorrhage or high proteinaceous material.

The usual characteristic location of lymphangioma, its large size and painless progressive course helps to suggests the diagnosis and differentiate it from other differentials, however, since the radiological images does not always provide sufficient information, histopathological diagnosis by Fine Needle Aspiration (FNA) remains the mainstay of diagnosis in some cases [1].

FNA fluid aspirates will show clear, yellowish, or straw-colored fluid, with plenty of lymphocytes. However, these specimens are rarely cellular and FNA is usually not diagnostic, since it cannot evaluate the architecture of these lesions. Therefore, surgical excision with histopathological diagnosis remains the mainstay of diagnosis [9].

Primary treatment of lymphangioma is complete surgical excision. Ensuring safe margins is important to prevent recurrence; however, obtaining safe margins can be difficult because of its tendency to infiltrate the surrounding soft tissues. Recurrence probability is low if total excision s performed. Other options include percutaneous sclerosis or a combination of surgical excision and percutaneous sclerosis [8].

In conclusion, we presented a rare case of breast lymphangioma disease is even more rare in adults, as seen in our case. Clinical history, typical location and radiological appearance help in guiding to the correct diagnosis, however, FNA, histopathological analysis remains the mainstay of diagnosis in most cases, and the primary treatment is surgical with a high probability of recurrence if the safe margins are not removed.