Background: Gd-DOTA is a micromolecular compound that is not specific for HER2+ breast cancer cells. It is not retained in the tissues and easily excreted via kidney and stool leading to suboptimal imaging. Conjugation of Gd-DOTA with trastuzumab by dendrimer will create a macromolecule and specifically bind to HER2 receptor. This study aimed to evaluate enhancing intensity of Gd-Dota-Dendrimer-Trastuzumab by Magnetic Resonance Imaging (MRI) in HER2+ breast cancer cells HCC1954 in apple scaffold.

Result: We confirmed that HCC-1954 cells were grown in apple scaffold and increased intensity of MRI image. Interestingly, Gd-Dota-Dendrimer-Trastuzumab tended to increase intensity of MRI image compared to Gd-Dota using HCC-1954 cells in apple scaffold, although the difference was not significant (p>0.05). Importantly, the HER2+ sensitive to trastuzumab cells, SKBR3 cells were still sensitive to Gd-Dota-Dendrimer-Trastuzumab but not the HCC-1954 and MCF-7 cells.

Magnetic Resonance Imaging (MRI) is a radiological imaging examinations that exploits proton elements (hydrogen ion) residing in human tissue. The advantage of MRI imaging compared to CT scan are a non-ionizing radiation imaging, multiple image/multiplanar drawing images, good spatial resolution, no bone artifact, noninvasive and superior able to assess soft tissues such as breast cancer [1]. The general approach to MRI data analysis involves the extraction of signals from a given area. The use of ROI analysis becomes standard practice across all MRI imaging [1,2].

One way to improve imaging quality of MRI is administration of contrast agent. MRI contrast agent is a paramagnetic compound having considerable moments and able to shorten the relaxation time in T1 and T2 weighing mode, which will result in a more vivid and clearly discernible tissue image [3,4].

Gadolinium chelate is a widely used as MRI micromolecular contrast agent, acting on extracellular and non-specific. To overcome nonspecific trait to become specific agent, another compound is needed. The target is that the contrast compound would be able to be retained in intracellular and a clearer image. Hardiani et al. have successfully performed the synthesis and stability test of Radiogadolinium (III) Gadolinium-DOTA-PAMAM (Poliamidoamine) Generation 3.0-Trastuzumab as SPECT contrast agent (Single Photon Emission Computed Tomography) - MRI contrast agent for breast cancer diagnostics [5-7]. Previous result successfully demonstrated a strong signal intensity increase on MRI examination with the Gd-DOTADendrimer-Trastuzumab contrast compound against the SKOV3 cell line. SKOV3 is a positive HER-2 cell line in ovarian cancer that is sensitive to trastuzumab.

HCC cell line 1954 breast cancer which is a cell line of breast cancer of HER-2 positive expression resistant to Trastuzumab. Approximately 25-30% of breast cancers express HER-2 (Human epidermal growth factor receptor 2), although the incidence is low but has poor biological behavior in the context of aggressiveness, thus affecting its prognosis [8-10].

Cell culture is a technique associated with a complex process of cell isolation from the original environment (in vivo) as well as in controlled and aseptic (in vitro) environmental conditions. The cell is taken from the original tissue, primary culture or cell line in the form of suspension of cells isolated for days to weeks in sterile conditions with an environment adapted to the in vivo environment of the cell so as to survive and controlled proliferation occurs [11-15].

Cell cultures can be planted in apple scaffolds. Characteristics of apples used are apples of fuji type. The apple scaffold after peeling is frozen in temperature -80°C, and then incorporated into the methanol solution resulting in deselularization of the organelles within the apple cytoplasm. Then cell line culture is planted in the framework of apples that have experienced the deselularization [16-20].

The purpose of this study was to evaluate Dendrimer-Trastuzumab in enhancing of imaging using MRI in cell line HCC 1954 on breast cancer HER-2 positive expressions.

Apple scaffold was made and modified according to previous study (Figure 1). Briefly, Fuji apple was put in a -20°C freezer for 5 min before punched with micro-centrifuge tube 2 ml and cut to a uniform tube form with 1 cm height. Tissue was decellularized from apple scaffold using 0.5% sodium dodecyl sulphate (SDS) (Sigma-Aldrich) solution for 24 h then washed and incubated with PBS (GIBCO) for 24 h. For culture, apple scaffold was centrifuged at 1000 rpm for 10 s to drain remaining PBS then placed on 24-well-plate followed by 0.5 ml cell suspension of 1 x 106 breast cancer cells. Sample was then incubated in temperature of 37°C and 5% CO2 for an hour before added 1.5 ml complete medium.

Experiments were conducted in triplicate and two repeats. Breast cancer cell line was cultured in apple scaffold for 8 weeks inside a 12 well plate with RPMI medium. Culture condition was monitored and medium was changed twice a week.

HE staining and microscopy

Fixation of cell inside apple scaffolding was done using cold methanol 100% for 10 min. The sample were then washed with pH balanced PBS 3x and then stored for one day before embedded in paraffin with standard method. Paraffin block then sliced into 5 μm slice using microtome and mounted on glass slide. Hematoxylin and Eosin stain was done to visualize structure of interest.

To evaluate enhancing MRI imaging of GD-dota-dendrimer trastuzumab in HER2+ breast cancer cells, HCC-1954 cells in apple scaffolds were treated with 0.5 nM of Gd-DOTA-Dendrimer- Trastuzumab or Gd-DOTA for 24 h prior to scanning with MRI.

MRI is an imaging modality that has the magnetic properties that each proton has in producing the image. Every human body is made up of atoms. These atoms will form a water molecule consisting of 2 hydrogen atoms and 1 oxygen atom. Conventional MRI generally empowers the magnetic properties of protons. MRI imaging is focused on T2 differences between tissues so the sequence is called T2-weighted imaging (T2 WI). If the contrast difference in the image is not focused on the difference between T1 and T2 between tissues, but more towards the difference in proton density, then the sequence is called Proton Density Weighted Imaging (PDWI).

Treated cell lines were scanned using Magnetom Essenza 1.5T (Siemens, Germany). Five planes were scanned using T1 weighted. At T1WI the TR is given a short enough so that the fat and water tissue is not enough time to recover the initial magnetization value, so there is a considerable difference between water and fat. In T1WI water has a weak signal that has a dark picture or hypointens, while fat has a stronger signal that has a brighter picture or hyperintens. In the T2WI sequence water has a stronger signal that has a lighter or hyperhensive image whereas fat has a weaker signal resulting in a less light, dark or hypointens picture. Fat sequences are usually used in MRI imaging to suppress signals from adipose tissue or detect adipose tissue. This can be applied to T1WI and T2WI. Due to the short relaxation time, fat has a high signal on MRI. This high signal, easily recognizable on MRI, may be useful for marking lesions. The 3 middle plane were then use for image analysis.

The cytotoxic effect of Gd-DOTA-Dendrimer-Trastuzumab as well as Gd-DOTA contrast ware evaluated in breast cancer cells using MTT assay, modified from our previous study [20,21]. Briefly, cells were seeded on 96-well plate then treated with indicated concentrations on the next day followed by incubation for 72 h in an incubator with 5% CO2 at the temperature of 37°C. Cells with 1% DMSO were used as control. The MTT solution was added and incubated for 4 h before DMSO was added to dissolve the formazan crystal. Absorbance was measured at the wavelength of 450 nm for finding percentages of viable cells on treated cells compared to the control cells. (Figures 2 and 3) Figure 2: Apple scaffolds were unseeded (a) or seeded with HCC-1954 cells (c), then cultured for 8 weeks; followed by MRI scanning (b, d) and HE staining (a, c). Succesfully grown of HCC-1954 cells in apple scaffold showed an increase of MRI signal intensity (e). 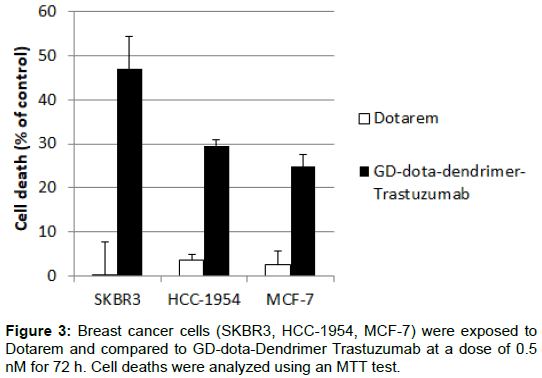 Figure 3: Breast cancer cells (SKBR3, HCC-1954, MCF-7) were exposed to Dotarem and compared to GD-dota-Dendrimer Trastuzumab at a dose of 0.5 nM for 72 h. Cell deaths were analyzed using an MTT test.

Generalized Estimating Equation (GEE) method with the exchangeable matrix correlation structure was used to calculate the difference in signal intensity in the ROI of the Gd-DOTA treatment group with Gd-DOTA-Dendrimer-Trastuzumab. Analysis was done using SPSS for Windows version 13.0 with 95% confidence degree with value p ≤ 0.05%.

Experiments were performed using HCC-1954 cell line of HER-2 positive IHC-proven HER-2 breast cancer grown within the framework of cultured cells of apple (scaffold). MRI examination was performed on apple scaffold without and with HCC cell line 1954 cancer of HER-2 positive expression of breast to obtain enhanced imaging by measuring signal intensity at 6 areas (ROI). The Dendrimer Trastuzumab Gd- DOTA contrast compound specifically causes death in breast cancer cells with positive HER-2.

The result of MRI on apple scaffold preparation without and with cell line by measuring ROI and statistical analysis using Generalized Estimating Equation (GEE) Method with exchangeable matrix correlation structure is used to overcome the correlation observation obtained p value <0.001. The Gd-DOTA Dendrimer Trastuzumab contrast compound increases the intensity of the MRI signal.

There is a tendency of increased imaging in HCC cell line 1954 of HER-2 positive expression breast cancer after contrast administration of Gd-DOTA-Dendrimer-Trastuzumab when compared with the administration of Gd-DOTA contrast compound using ROI (Figure 4). Although the results of statistical analysis with p value 0.06 (p>0.05) but not necessarily reduce the benefits of clinical aspects. HCC cell line 1954 cancer of HER-2 positive expression is a cell line that is resistant to trastuzumab, so at some internalization does not occur endocytosis. The intensity of the signal resulting from the bonding of the Gd-DOTA and dendrimer contrast compounds forms the macromolecules to enhance the imaging. Figure 4: There was a trend in increase of MRI signal intensity of cultured apple scaffold as shown with white spheres using contrast of (a) Gd-D or (b) Gd-D-T, and (c) ROI data, although not significantly significant (p=0.05).

This study has several limitations among others; no trials of trastuzumab in HER-2 cell line HCC 1954 cancer of positive HER-2 breast cancer were performed.

There is a trend of signal intensity increase between apple scaffold and apple scaffold with cell line; i.e. there was a binding of contrast compound Gd-DOTA-Dendrimer-Trastuzumab in cell line HCC 1954, although the increase of signal intensity on the average MRI examination of the Gd-Dotrim-Dendrimer- Trastuzumab contrast group was not significantly significant (p 0.06). Further tests are needed to prove trastuzumab attached to the HER-2 receptor of breast cancer.

Authors would like to thanks Dr. Kurnia Wahyudi for statistical analysis suggestion and Staff of Advanced Biomedic Laboratory for all the technical assistance.

Copyright: ©2017 Soekersi H, et al. This is an open-access article distributed under the terms of the Creative Commons Attribution License, which permits unrestricted use, distribution, and reproduction in any medium, provided the original author and source are credited.