Cell differentiation involves exiting the cell cycle and activating gene programs that are responsible for differentiation. The cyclin-dependent CDK4 kinase regulates the cell cycle at the G1/S stage and is an important molecule that contributes to tumorigenic mechanisms in nearly all neoplasms. CDK4 links the cell cycle to mitogenic/anti-mitogenic signals with unknown mechanisms cooperating with Cyclin D1. The cellular "decision" for differentiation or continuous proliferation occurs predominantly in the G1/S phase with mechanisms dependent on the type of cells with CDK4 kinase having a key role. We have recently demonstrated that the combination of sub-pharmaceutical doses of retinoic acid (ATPA) and CDK1/CDK2 inhibitors in acute promyelocytic leukemia (APL) cells induces degradation of CDK4 protein by simultaneously differentiating cells into granulocytes. In this paper we report that in proliferating NB4 cells, C/EBPε and CDK4 interact whereas treatment of the cells with a CDK1/CDK2 inhibitor and sub-pharmacological levels of all-trans retinoic acid leads to dissociation of the two proteins concomitantly with granulocytic differentiation of the leukemic cells. Our data suggest that CDK4/C/EBPε complexes may contribute to APL cell proliferation and that their dissociation may be required for differentiation.

Acute promyelocytic leukemia (APL) is a subtype of acute myeloid leukemia, (AML) and comprises 10-15% of all cases. It is characterized by chromosomal rearrangements that generate oncogenic fusion proteins, which interfere with the functions of wild-type proteins involved in growth and differentiation. Nearly 95% of patients with APL specifically harbor the t (15;17) (22;q11.2-12) balanced translocation which results in a chimeric gene that encodes the PMLRARα fusion protein as well as its reciprocal RARα-PML. Fusion with the zinc finger protein (PLZF) [1], nuclear mitotic apparatus (NUMA), nucleophosmin (NPM) or signal transducer and activator of transcription 5B (STAT5B) represent less than 1% of all cases [2,3].

APL therapy with all-trans retinoic acid (ATRA;tretinoin), which promotes the terminal differentiation of malignant promyelocytes to mature granulocytes has been a staple approach for many years, however ATRA is characterized by toxicity [4]. Remissions induced by ATRA therapy alone are short-lived with a median duration of only 3.5 months [5]; therefore ATRA must be combined with other agents. Most APL therapeutic protocols combine ATRA with anthracyclinebased chemotherapy. Other approaches include combinations of ATRA and arsenic trioxide (ATO) which yield equivalent outcomes compared with ATRA plus standard chemotherapy in patients with APL classified as low-to-intermediate risk [6].

CCAAT enhancer binding protein epsilon (C/EBPε) is a myeloid specific transcription factor that is essential for terminal differentiation of myelocyte precursors to granulocytes [7]. Inhibition of cell cycle progression at the G1 stage is critical for induction of differentiation. Cyclin-dependent kinase CDK4 is a key regulator of this transition [8,9]. Combined ATRA/CDK1/2 inhibitors lead to degradation of CDK4 thus permitting the onset of differentiation [10]. Another key factor in inducing differentiation is the retinoblastoma protein. Retinoblastoma (Rb) and E2F1 are critical cell cycle regulators that interact with C/EBPε controlling leukemic cell fate and also have been implicated in several differentiation systems [11,12]. The interaction between C/EBPε and Rb enhances C/EBPε-mediated transcription of myeloid specific genes both in reporter assays and endogenously.

Here, we demonstrate that, in addition to its interaction with Rb and E2F1, C/EBPε also interacts with CDK4 in proliferating, NB4 acute promyelocytic leukemia cells and this interaction is abrogated during ATRA/OLO-induced differentiation to granulocytes. We propose that the interactions between C/EBPε and CDK4 are important for the proliferative ability of these cells and that their dissociation after ATRA/OLO administration to these cells may be required for differentiation to granulocytes.

NB4 cells were obtained from DSMZ, Germany and cultured in suspension in RPMI 1640 supplemented with 10% FBS (GIBCO-BRL) 100 U/ml penicillin/streptomycin in 5% CO2, 37°C, in a humidified atmosphere. Cells were seeded at 50,000/ml and maintained until they reached 500,000/ml. They were then divided 1/10 with fresh medium and cultured for several days. Once a week the cells were centrifuged at 4°C and 1500 rpm in a tabletop centrifuge and replated with fresh medium.

The reagents were: 1 μM DMSO, which was used as control. 0.1 μM and 1 μM ΑTRA, 25 μM Olomoucine, or combined 0.1 μM ATRA/50 μM Olomoucine. The 6 well plates were then covered with aluminum foil and placed in the incubator. 0.2 μl samples were removed at the indicated days, mixed with an equal volume of trypan blue dye and the number of cells was counted in triplicate at each time point. Dead cells (stained blue) were excluded. In all cases triplicate experiments were performed.

Proliferation of NB4 cells was measured once daily for a duration of 4 or 5 days using a haemocytometer. Measurements were carried out in duplicate and the average number of cells was calculated and used as the final concentration number. Experiments were performed in triplicate.

We used the nitroblue tetrazolium dye reduction assay (NBT) to determine the functional differentiation of the NB4 cells as described before [15]. This was done daily for 5 days. Typically, 10 ml of NBT (Sigma-Aldrich, USA) solution (10 mg NBT in 1 ml DMSO) were mixed with 2 μl PMA 0.5 × 10-4 mg/ml (Sigma-Aldrich, USA) (1 mg PMA, 1 ml Acetone, 1 ml H2O). 100 μl of cell culture from each of the 6 wells along with 100 μl of NBT reagent were mixed in an 8 compartment microscopy plate and left in the incubator for 15 min, with the use of microscopy at 40X magnification the percentage of the cells that were positive to the NBT reaction (stained purple) was calculated.

Half of the samples were subjected to SDS-polyacrylamide electrophoresis and inmmunoblotted with anti-CDK4, anti-CDK2 or anti-C/EBPε antibodies (Santa-Cruz, USA) to determine the presence of our target proteins. For western blots, 100 μg of protein from each of our cell cultures were loaded into a 10% acrylamide gel and subjected to electrophoresis using a Bio-Rad-Mini Protein 3 electrophoresis device (Bio-Rad, USA).

The samples were run at 15 mA for 10 min and then at 35 mA, when the proteins move to the separation portion of the precast gel until the loading dye reaches the end portion of the gel.

For immunoblotting 1:1000 dilution of the primary antibodies was used in 5% non-fat milk, 0.002% TBS-Tween, the membrane was incubated with the primary antibody at 4°C overnight. A dilution of 1:10000 of our secondary HRP antibody in 5% non-fat milk, 0.002% TBS-Tween was used and the membrane was incubated at room temperature for 1 hour. Results were visualized with chemiluminesence (ECL, Pierce, USA).

ATRA-induced, APL cell differentiation is a multi-stage process involving the activation of several signaling pathways. Key to this process is the activation of expression of the C/EBPε, CCAATenhancer-binding transcription factor protein acting at the promyelocyte-to-myelocyte stage [7].

Differentiation of promyelocytic to myeloid cells requires the cessation of the cell cycle brought about by down regulation of cyclin-dependent kinases as well as the activation of granulocyte-specific transcription and the concomitant repression of E2F1-mediated transcription [16].

We have previously demonstrated that administration of a combination of sub-pharmacological levels of ATRA and the CDK1/2 inhibitor, Olomoucine (OLO), is as effective or more effective in inhibiting proliferation and in inducing differentiation of the APL cell line NB4, than ATRA alone at two different concentrations. Moreover, we demonstrated that these phenomena are concomitant with downregulation of the CDK4 kinase and of the fusion oncogenic protein PMLRARα, but not of CDK1 or CDK2 [10].

Indeed, the combination approach with ATRA/OLO is as effective as ATRA alone, at higher doses, in differentiating the leukemic cells (Figure 1A). NB4 cells are typical APL cells that are arrested at the promyelocytic stage with large nuclei and reduced cytoplasm, Staining of cells with the NBT reaction, showed that cells differentiated either with 1.0 μM ATRA (Figure 1B, middle panel) or with ATRA/OLO (Figure 1B, right panel), assume a large, spread out granulocytic morphology, with shrank, lobulated nuclei. In contrast, control, untreated cells, stain only with Giemsa stain (Figure 1B, left-most panel) revealing large, spread out nuclei, characteristic of APL cells. Figure 1: (A) A combination of sub-pharmacological levels of ATRA and the CDK1/2 inhibitor Olomoucine, inhibits NB4 cell proliferation as effectively as pharmacological ATRA levels alone. NB4 cells were treated with the indicated amounts of ATRA/Olomoucine for 5 days and the number of cells was counted as described in Materials and Methods. Values are averages from three (n=3, p=0.05) experiments. Abbreviations: ATRA; all-trans retinoic acid, OLOM; Olomoucine. (B) Acute promyelocytic leukemia NB4 cells, differentiated for 5 days with ATRA alonestained with the NBT reaction. (Figure 2B, middle panel), ATRA/OLO (right panel) or control cells (left panel) were stained with the NBT reaction and centrifuged on slides. In contrast to control, proliferating cells, the differentiated cells have assumed a flattened, spread morphology with lobulated nuclei and have ceased proliferating.

Differentiation of myeloid precursors to granulocytes also requires the activation of the CCAAT-binding transcription factor, C/EBPε [7,17,18]. C/EBPε interactions with Rb and E2F1 are required for the activation of granulocytic-specific transcription and for repression of proliferation, growth arrest and for initiating the process of differentiation (Figure 2) [19]. We and others have demonstrated that activation of C/EBPε transcriptional activity is concomitant with differentiation which may be a desirable target for intervention with the combined approach [10,20]. In untreated NB4 cells, C/EBPε expression is increased slightly at 24 h (Figure 3, upper blot) and in cells treated with ATRA alone (Figure 3, second blot from top) as well as in ATRA/OLO treated cells (Figure 3, third blot from the top). Since C/EBPε plays a key role in controlling differentiation by interactions with Rb and E2F1 [21], we tested to see C/EBPε’s ability to interact with other key proteins of the G1 stage of the cell cycle such as the CDK4 kinase. Indeed, CDK4 and C/EBPε can interact, albeit slightly (Figure 3B) whereas we could not detect/CDK2 protein in C/EBPε immunoprepcipitates (Figure 3B, lower panel). We attribute this to the decrease of CDK4 protein levels resulting from its rapid degradation after ATRA/OLO administration [10]. Alternatively the experimental conditions might not be optimal for this interaction. 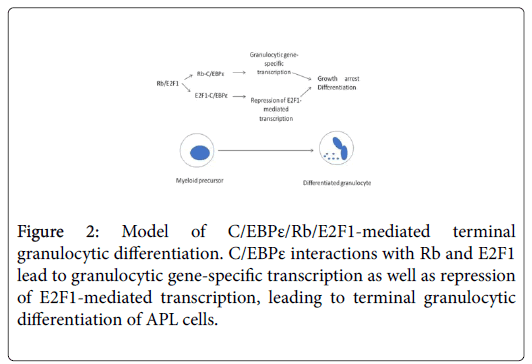 Figure 3: (A) C/EBPε is expressed maximally after 24 h of treatment. Western blots for C/EBPε were performed with 100 μg of whole cell extracts from NB4 cells treated for up to 72 h, or untreated cells, transferred and probed with a C/EBPε antiantibody (Santa-Cruz, USA) as described in Materials and Methods. C/EBPε typically migrates as a 30-32 kDa band (arrows) on SD-PAGE gels. (B) C/EBPε interacts with Cdk4, but not with CDK2, in NB4 cells treated with ATRA/OL for 24 h. 5 mg total cell extracts or nuclear extracts from treated or untreated NB4 cells were subjected to immunoprecipitation with an anti-C/EBPε antibody (Santa-Cruz, USA) or with IgG control serum, overnight at 4°C and agarose-G and subjected to western blot as described in Materials and Methods (upper panel). CDK2 (lower panel) was used as control.

Our data indicate that in untreated NB4 cells, C/EPBε and CDK4 are in a complex or complexes (Figure 4, left panel) that may regulate cell cycle progress by several different but not mutually exclusive mechanisms. For example, although expressed, C/EBPε/CDK4 complexes may prevent C/EBPε from activating its transcription programs that induce differentiation. Second, CDK4/C/EBPε complexes may be enhancing cell cycle progression and third, such complexes may be inhibiting or activating other pathways that regulate the differentiation of the leukemic cells. In contrast, when the cells are treated with ATRA/OLO or with ATRA alone, CDK4 and C/EBPε dissociate from their complex (es) and CDK4 is degraded, leading to cessation of cell cycle progress and to initiation of the granulocyte differentiation programs. Our results suggest that CDK4/C/EBPε complexes probably play key roles in myeloid cell proliferation and differentiation. In summary, ATRA at high concentrations and ATRA at sub-pharmacological levels in combination with Olomoucine are as effective as ATRA alone at high levels in dissociating CDK4/C/EBPε complexes, thus permitting differentiation to proceed. The corresponding author gratefully acknowledges grants # 88132 and 87711 from the program for young investigators by the Aristotle University of Thessaloniki, Macedonia, Greece.

The authors declare no conflict of interest of any kind.

Copyright: © 2018 Tsolkas G, et al. This is an open-access article distributed under the terms of the Creative Commons Attribution License, which permits unrestricted use, distribution, and reproduction in any medium, provided the original author and source are credited