Diversity and Resilient Varieties of Enset for Climate Change Adaptation: The Case of Different Agro-Ecological Zones of Hadiya, Southern Ethiopia

Copyright: © 2017 Nurebo CT. This is an open-access article distributed under the terms of the Creative Commons Attribution License, which permits unrestricted use, distribution, and reproduction in any medium, provided the original author and source are credited.

The objective of this research was to assess diversity and resilient varieties of enset and its contribution in climate change adaptation. Household survey and biomass measurement were conducted to collect primary data from the field. More than fifty five (55) landraces of enset were found in the different AEZs. Among the identified landraces Ginbo, Gishira, Disho, and Siskella were assessed as resilient varieties. From the ShannonWeiner Diversity Index, the w/dega (3.86) had more diverse enset landraces than dega (3.85) and dry w/dega (2.79). The survey analysis shows that most respondents opted for enset crops to grow at the time of stress period than other annual crops. According to the survey from the household, enset crop was drought resistant and it could survive long time without enough rain and water. The overall output from the research showed that enset has contribution in adaptation to climate change and variability

The IPCC defines climate change adaptation as ‘adjustments in natural or human systems in response to actual or expected climatic stimuli or their effects, which moderates harm or exploits beneficial opportunities’ [1]. In general words, it refers to all those responses to climate change that may be used to reduce vulnerability or susceptibility to harm or damage potential [2].

Traditionally, farmers use biodiversity such as diverse crops, trees and wild plant species, livestock and aquatic species to sustain their livelihood from climate change [3,4]. This use of diverse species and varieties enhances their adaptability and resilience capacity to changing environmental and economic conditions. Genetic diversity is a key element in farmers’ livelihood strategies particularly in areas under high ecological, climatic and economic stresses and risks [4].

Ensete venticosum is also a drought resistant crop and is considered as a crop of bad times [5]. It is a monocot perennial crop that belongs to order Schistaminae, family Musaceae and genus Enset [6]. Genus enset has different species, but there is some ambiguity regarding their numbers. However, all authors agree that Ensete ventricosum is the only cultivated species in Ethiopia. It looks like a large, thick single stemmed banana like plant [7]. Usually it is larger than banana and 6-12 meters tall. Enset cultivation can be restricted to altitudes ranging from 1600-3100 m.a.s.l [8]. But according to Brandt et al. [9] it grows best at elevation between 2000 and 2750 m.a.s.l with an annual rainfall of 1100 mm to 1500 mm.

Enset (Ensete ventricosum) is a sustainable indigenous crop that uses to ensure food security in different parts of Ethiopia. For instance, the northern town of Lalibela was the site where thousands of people died as a result of the mid-1980s famine. Then, they expressed interest in learning to cultivate and process enset for food as a means of increasing food security [9] and coping mechanism. Cultivation of this crop can significantly improve livelihood by maintaining food security in household and national level. This is one of major crop on which Ethiopia depends for food security. It is a major crop for more than 20% of peoples in Ethiopia. It is grown largely for security reasons, if cereal crops fail and eaten in the form of kocho and hamicho [9].

Hadiya zone is one of the zones of southern nations, nationalities and peoples region. It is situated roughly at the margin of the great Ethiopian Rift Valley at western margin in north western part of SNPPR. It located between 7°07’- 7°92’N and 37°29’- 38°13’E. The zone bordered in East and North East with Alaba Special Wereda and Siliti Zone, respectively. In the North it bordered with Kembata Tembaro, in the South East it is bordered with Oromiya region. Currently, the zone has ten Weredas/districts and one Town administration. Hossana is the capital city of the zone and it is 232 km from Addis Ababa.

Based on simplified agro - climatic classification of Ethiopia, Hadiya Zone lies in three agro- climatic zones having total area of 346958.5 ha. The highlands are temperate and cold climate (are locally called Dega or Hanswa ranges from 2500-3200 m.a.s.l), midland (warm or locally called Woinadega or Hansw kaala–ranges from 1500 to 2500 m.a.s.l), and lowland are hot and arid (also called Kola or kaala, ranges from 500 to 1500 m.a.s.l) each comprising 23.7%, 64.7% and 11.6% of the land area, respectively. According to the work of MOA and Alemayehu [10,11] the sampled districts were classified as dega and woina dega for Misha and Lemo respectively. But the third sampled district was called Shashogo; it can be classified as dry warm or dry woina dega.

This study was conducted in Hadiya zone. It contains ten districts and one city administration. Of these three districts namely Misha, Lemo and Shashogo districts were selected using non probability sampling methods, and the rationale behind the selection was their difference in agro- ecological zones, having meteorological station and being area where enset can be cultivated.

The households were selected randomly from the selected kebeles depending on population size by applying the formula suggested by Yamane.

Where: n- the sample size,

N- The population size, and

According to CSA (Central Statistics Authority) [12] the total household numbers of the eight kebeles were 4668 as reported by Samia. Depending on this data, the researcher calculated the sample size based on Yamane’s formula, and got 194 target populations. But only 145s were taken as total sample size, this was due to the absence of enset farm in all registered house hold. Specially, in Shashogo district the number of households with enset farm was very low. The survey was conducted in the local language, Hadyisa.

By using purposive sampling techniques the researcher identified some key informants from different field of experts and farmers. Hence, a good interview and discussion was held by allowing a lot of time, mainly on climate related hazards in different zones of agroecology by relating with enset. All the interview and discussion were recorded by tape recorder, in order to minimize the time spent and information loss.

Field observation was conducted at all areas of where household survey was held. Part of enset sample and photographs were taken to cross check the variety of enset and to illustrate some of activates in the field. The enset landraces were collected from the household in the form of interview. And it was crosschecked by direct observation and photographs. It was analysed for diversity in each AEZ by using Shannon index (H’). This formula is listed below.

pi = is the relative abundance of landraces “i” in the AEZ

Diversity and resilient varieties of Enset

During the survey, different landraces of enset that collected from the household in each agro-ecological zone were analysed and crosschecked intensively to reduce redundancy. Its numerous landraces differ with respect to morphological characters (leaf, midrib, petiole and pseudostem colour), use value (kocho, corm and fibre), quality of products, maturity period, vigour and reaction to bacterial wilt [13,14]. Many studies have used variety names to identify diversity on farm with crop species that farmers can recognize as diversity [15]. These lists are summarized in Table 1 below.

Some varieties of enset shown above are similar with the result indigenous production methods and farmer based biodiversity in major enset-growing regions of southern Ethiopia [13]. As it can be found from the household survey some varieties of enset were resilient and some others were vulnerable to climate change (Table 2). Farmers’ strategies in this study area were to select and grow many different varieties like Ginbo, Gishira, Disho and Siskella (Table 2).

Table 2: Resilient and vulnerable varieties of enset according to local farmers account (N70).

Only those resilient and vulnerable varieties reported by more than 27% and 10% respectively are shown.

As indicated in Table 1 the landraces of enset were generally so diverse but the diversity was not the same in the sampled AEZs of the study area. Based up on the survey, vulnerable varieties could also grow in the same area but in limited number. Accordingly, the diversity was calculated by Shannon Weiner diversity Index (H’). It showed that 3.85, 3.86 and 2.79 for dega w/dega and dry w/dega AEZ, respectively (Figure 1). 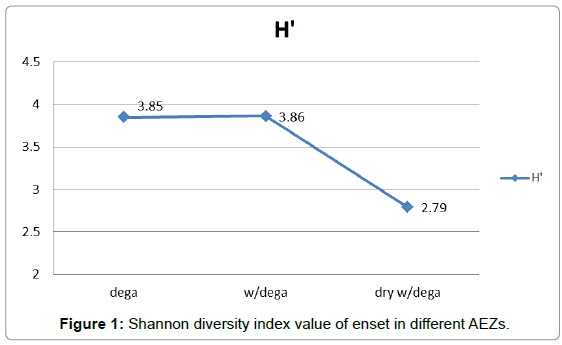 Based upon this index the w/dega (3.86) had more diverse enset landraces than dega (3.85) and dry w/dega (2.79). This is probably for the reason that w/dega had both dega and dry w/dega agro-ecological characteristics. But highest number of varieties per household was identified in dega than the other zones. This shows that the enset growing area has high adaptation capacity than the limited growing area. This result is in agreement with the work of [16]. The use of genetic diversity can help to enhance the resilience of natural system to buffer against possible risk [16].

Diversity is important because it provides source of genes to crops to adapt to change in climate [16]. In the household level, the average enset farm size covered by enset crop was not the same in the sampled AEZs. Table 3 shows that, the mean enset farm size in each household was 0.46 ha and 0.4 ha in dega and w/dega respectively.

*Mean values with the same letters across the column are not significantly different at α = 0.0

According to the data collected from the Hadiya zone agricultural office, in the past five year different climate related hazards were recorded. Flood, drought, erratic rainfall/hailstorm and natural fire were some of the hazards that occurred. The frequency and types of hazards were different in each AEZ. The secondary data revealed that in average the hazard could occur two time per year in dry w/dega but probably one times per year in other AEZs (Table 4). Yearly, in average 138 households in dry w/dega AEZ could be affected due to those hazards. Of the three AEZs of rapid relief users, about 45% could be from the dry w/dega AEZ (Table 4). The vulnerability of the AEZs might depend on the enset cultivation. This might implies that no enset growing area has low adaptive capacity than the growing area.

Table 4: Frequency of CRH, % of rapid relief users, No. of affected kebeles and household per year in AEZ.

Enset landraces are so diverse and some of which are resilient to climate change. Therefore, an urgent further study should be conducted on its status, resilience and potential on environmental sustainability; as well as providing institutional and policy support to continue growing landraces and their use in plant breeding.