In Double Orifice Mitral Valve (DOMV) with Atrioventricular Canal Defect (AVCD) aim of the team should be to prevent residual regurgitation and new stenosis. We present a case report of DOMV detected incidentally during surgery in a case of AVCD with severe mitral regurgitation.

Double Orifice Mitral Valve (DOMV) is a rare cardiac anomaly. It is uncommon to find it as an isolated lesion and is seen associated with Atrioventricular Septal Defects (AVCD) in approximately 5% of cases [1]. Although a number of case reports of DOMV have been reported, literature highlighting its surgical management is scarce [2-4].

Preoperative planning with 2D echocardiography and magnetic resonance imaging is required. The challenge lies in, repair of DOMV associated with regurgitation, without producing new stenosis. We have described a case of successful repair of DOMV with AVCD without new onset stenosis or residual regurgitation.

A 2-year male child presented with history of recurrent chest infection and failure to thrive, for 6 months of age. On examination, along with pre cordial bulge, a pansystolic murmur, was heard over left lower sternal border. Echocardiography revealed complete AVCD, moderate Tricuspid Regurgitation (TR), severe MR and dilation of RA and RV. Since room air saturation was 90% and echo revealed bidirectional flow, cardiac catheterization was done to assess for operability.

Baseline Qp/Qs was 2.173 and ratio of Pulmonary Vascular Resistance (PVR) to Systemic Vascular Resistance (SVR) was 0.347. Post oxygen supplementation, the Qp/Qs was 15 and the ratio PVR/SVR dropped to 0.036. Further, Ventricular Septal Defect (VSD) was almost closed; hence patient was labeled as a case of transitional AVCD with severe MR with moderate TR with operable hemodynamics.

Pre-operative on table Trans-Thoracic Echocardiography (TTE) revealed large OP ASD and severe MR with MR jet directed primarily into RA through OP ASD shown in Figures 1A and 1B. In view of these two, less volume was directed towards LV. Patient was operated via standard midline sternotomy with aorto-bicaval cannulation and cardiologic arrest. Intra-operatively, there was a large Ostium Primum Atrial Septal Defect (OP-ASD) of size ~ 3 cm × 1 cm. No VSD could be appreciated. Left AV valve revealed a Double Orifice Mitral Valve (DOMV) shown in Figure 2A, with two orifices, a major orifice and a minor orifice, divided by a fibrous bridge. We were unable to categorize the valve leaflets of the major orifice, as per standard classification of left AV valve. On inspection of the subvalvular apparatus, single papillary muscle was present below both the orifices and almost all the chordae were attached to them, making both orifices prone to stenosis after repair. On saline jet test, minor orifice was competent, but gross MR was seen to be emanating from cleft like area in major orifice. The bridge between the two orifices was left untouched. The cleft like area in the major orifice was partially closed with 6/0 prolene, using continuous suture technique. After repair, sizing of the two orifices was done with Hegar’s dlilator and the combined orifice area of the two orifices corresponded to z value of 0 according to normogram shown in Figure 2B. 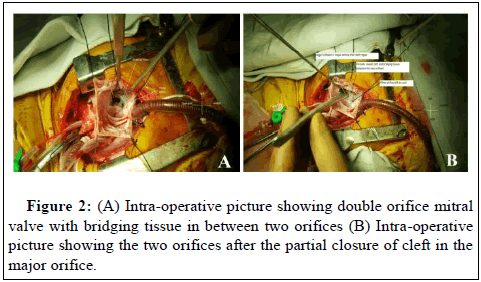 DOMV is a rare congenital cardiac malformation and around 5% of cases of AVCD have associated DOMV with them. The above entity can present itself as a normal functioning valve or less commonly, as Mitral Regurgitation (MR) or Mitral Stenosis (MS) [5].

The characteristic feature of DOMV is that, all the chordae of one papillary muscle go to one of the ostia while all of the chordae of the other papillary muscle go to the other ostia [6]. This predisposes to stenosis if the cleft is extensively sutured, creating a parachute like configuration. The degree of valve narrowing (minimum orifice area), which is acceptable has not been determined; however, orifice of 65% to 70% is well tolerated [7].

Our patient had DOMV, AVCD, severe MR with major orifice only slightly larger than accessory orifice. We opted for sequential approach, starting from the periphery of the major orifice and then moving towards the center, thereby testing at each step, adequacy of the orifice to avoid stenosis. We used Hegar’s dilators intra- operatively, to objectively assess the diameters of orifices, in order to calculate the area of both orifices for inflow into Left Ventricle (LV). It is preferable to accept mild regurgitation than to create a new significant stenosis.

As expected, treatment for non-regurgitant cleft in DOMV, AVCD is controversial. Some may argue against closing the cleft, to create new stenosis, however, partial closure can prevent late development of MR. Accessory orifices are seldom more than mildly incompetent and hence can be left untouched. Suture or patch closure of regurgitant accessory orifice has been practiced, but we believe, ratio of the two orifices must be taken into consideration before this kind of intervention [8].

Watchful closure of the cleft to avoid new stenosis can be done in DOMV, AVCD, severe MR, with good early outcome, however late development of hemodynamically significant MR is always a possibility.

Copyright: © 2021 Mahajan S, et al. This is an open-access article distributed under the terms of the Creative Commons Attribution License, which permits unrestricted use, distribution, and reproduction in any medium, provided the original author and source are credited.