Copyright: © 2017 Zhu H, et al. This is an open-access article distributed under the terms of the Creative Commons Attribution License, which permits unrestricted use, distribution, and reproduction in any medium, provided the original author and source are credited.

In situ AMCs have many excellent properties such as high specific strength and stiffness, especially in superior elevated temperature wear resistance. Up to date, they have been widely used as a light weight structural material and applied in automobile and aerospace [1-5]. It is known that the high temperature wear resistance of the in situ AMCs mainly determined by the kinds, sizes, shapes and thermodynamic stabilities of the reinforcements and their interfacial bonding strengths with the matrix at high temperature [6-8]. In situ reinforcements, such as Al2O3, TiB2, TiC, ZrC, AlB2 and ZrB2 or their compounds have been extensively used in AMCs [9-15]. Mathan Kumar et al. [16] used stir casting method to fabricate the Si3N4, AlN and ZrB2 reinforced Al 2618 alloy in situ composites and researched its wear behavior at elevated temperatures. And they have found that the composites have the higher percentage of contribution 63.84% influencing the wear rate of the Al 2618 composites and it is followed by Sliding Distance 20.2% and Temperature 5.32%, Load 4.01%, and Velocity 3.96%. Literature [17] has studied the high temperature wear properties of an in situ AMCs TiB2/Al-7Si and found that the transition of wear mode from mild to severe wear is increased to the higher loads and temperatures. Kumar et al. [18] have reported that the Al-4Cu alloy showed a transition from mild to severe wear at a load of 80 N and a sliding temperature of 373 K. But with the addition of 5 and 10 wt.% of in situ TiB2 particles to the Al-4Cu matrix, the transition temperatures are increased to 473 and 573 K and the loads are increased to 100 and 120 N, respectively. They also have found that at elevated temperature adhesion and metal flow are the predominant wear mechanisms for the Al-4Cu alloy. Whereas, oxidation, delamination and metal flow are the most dominant wear mechanisms for TiB2/Al-4Cu composites. Jerome et al. [19] have studied the effect of TiC ceramic particulate addition on the high temperature sliding wear resistance of the in situ composites produced by using a reaction mixture of K2TiF6 and graphite powder with molten metal. They have found that the wear rate increases with the increase in applied load and decreases with the increase in weight percentage of TiC. Both monolithic and composites are able to withstand thermal softening effects due to the formation of oxidative protective transfer layer. In our previous work [20-22], we have investigated that the reaction mechanism, mechanical properties and wear resistance of the in situ AMCs fabricated by an Al-ZrO2-C systems. When the molar ratio of C/ZrO2 is zero, the reinforcements of the composites are composed of particles α-Al2O3 and blocks Al3Zr. When the molar ratio of C/ZrO2 increases to 1.0, the Al3Zr almost disappears, subsequently the content of ZrC increases, which can greatly improve the wear resistance of the composites. When the wear test temperature increases, the worn surface oxidation, plastic deformation and matrix recrystallization considerably influences the wear behaviors and wear mechanisms of the composites. Up to now, there are few literatures concerning tribological behavior of this kind of in situ AMCs fabricated by Al-ZrO2-C system at elevated temperatures, which should be one of the main considerations at elevated temperature application. In order to contribute to this field, the friction and wear mechanism of the composites at elevated temperatures are investigated and the wear mechanisms are discussed in this paper.

To fabricate the aluminum matrix composites reinforced with particles of ZrC and Al2O3 and with reinforcement volume fraction of 20vol.%, the Al powders (30-50 μm average particle size, 99% purity), C powders (10-20 μm average particle size, 99% purity) and ZrO2 powders (3-5 μm average particle size, 99% purity) were selected as raw materials. Based on the following expected reaction equations: 13Al+3ZrO2 → 3Al3Zr+2Al2O3, 17Al+6ZrO2+C → 3Al3Zr+4Al2O3+ZrC and 4Al+3ZrO2+3C → 3ZrC+2Al2O3, respectively, the Al, C and ZrO2 three kind powders were proportionally weighed. The powder mixtures with the reinforcements volume fractions of 20 vol.% and the C/ZrO2 mole ratios of 0, 0.5 and 1.0 were played in a stainless steel vacuum jar for ball-milling. Processing parameters are as follows: weight ratio of ball to powder is 10:1 ball material is AISI420 stainless steel, ball diameter is 100 mm; rotating speed is 250 rotations per min and milling time is 2 hours. After milling, the mixed powders were air dried for 2 hours at temperature of 373 K and pressed into green billets in diameter of 30 mm under a pressure of 150 MPa. The billets were then played in a vacuum furnace for heating. When the temperature was increased to about 1073 K, the reaction occurred in the billet and then held at this temperature for 10 min and cooled down to environment temperature. The combusted billets were removed to their surface by grinding wheel, and then were extruded to rods in diameter of 7 mm at an extrusion rate of 10:1 at 723 K. The rods were lathed to wear test pins with 5.5 mm in diameter and 12 mm in length. The dry sliding wear tests were performed on a pin-on-disc wear machine (model MG2000, China) at 373 K and 473 K in air under relative humidity of 30-50%. The friction discs are made from of GCr15 (AISI52100) stainless steel. Its diameter, hardness and surface roughness is 70 mm, 55~60 HRC and 0.2 μm, respectively. Before the wear tests, all the end face of pins must be carefully grounded by fine metallographic sandpaper to make the counterpart surface smooth. The applied loads on pin by a lever system were 20, 30, 40 50 and 70 N, and the sliding speeds were 0.4, 0.5, 0.6 and 0.7 m/s, respectively.

The mass loss was measured by an electronic balance with the resolution of 0.01 mg. The wear surface was observed under a scanning electron microscope (SEM, Quanta 2000) equipped with an energy dispersive X-ray spectroscope (EDS) in order to indicate the wear mechanism. 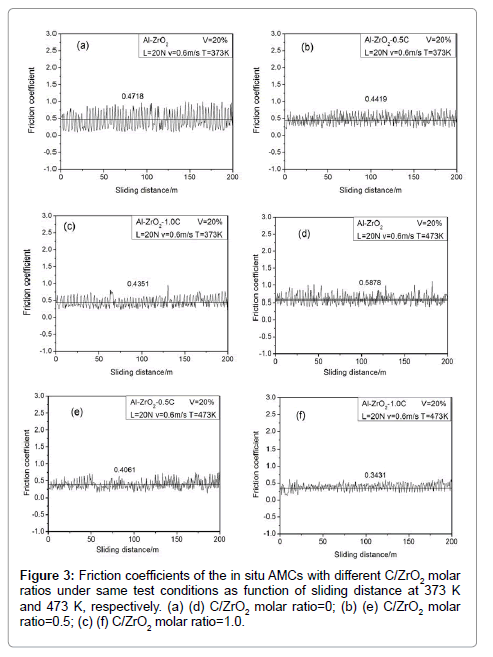 Wear mechanisms of the aluminum matrix composites are highly dependent on their surface microstructure and test temperature [23]. The wear surfaces of samples with C/ZrO2 mole ratios at 0, 0.5, and 1.0 are characterized by SEM micrographs in Figure 5a, respectively. The corresponding EDS patterns from the selected area are shown in Figure 5a. When the C/ZrO2 mole ratios are 0, the reinforcements of the composites are composed of Al3Zr blocks and α-Al2O3 particles. The wear debris are embedded into the wear surface and there are some shallow furrows on the wear surface in Figure 5a, which is resulted from the breaking of the brittle phase Al3Zr by the shear force and compressive stress. As compared with the ambient wear test results in our previous literature, the amount of debris on the wear surface decreases considerably. When the test temperature increases to 473 K, the recrystallization takes place on the wear surface during the repeating wear test. Thus, the hardness of the wear surface decreases. As a result, the debris caused by the broken brittle Al3Zr blocks is embedded into the aluminum matrix under the external applied load. It is indicate that the Al3Zr phase is disadvantageous to the wear resistance of the aluminum matrix composite. But the α-Al2O3 particles can effectively become the supporting points due to their high bonding strengths with the matrix. And they are beneficial to the increase of the wear resistance of the composites. Simultaneously, with the increase of test temperature, the oxidation layer is formed and become thinker on the wear surface, which can remarkably improve the wear properties of the composite. When the C/ZrO2 mole ratio increases to 0.5, the amount of the brittle phase Al3Zr decreases and a new phase ZrC simultaneously forms. As a result, the amount of the supporting points between the pin and disc further increases, which leads to the decrease in the friction coefficient of the composite. Its corresponding wear surface in Figure 5b shows that there are some sharp and straight furrows on the wear surface. Here, it is clear that the abrasive wear decreases and the other wear modes (i.e. oxidation wear and adhesive wear) increase relatively.

The wear test conditions: applied load=20 N, test temperature=473 K, sliding velocity=0.7 m/s and sliding distance=200 m. As the C/ZrO2 mole ratio increases to 1.0, the Al3Zr blocks are completely replaced by the ZrC particles. The α-Al2O3 and ZrC particles are the final reinforcements of the composite and they uniformly distribute in the aluminum matrix (Figure 5c). Its worn surface as shown in Figure 5c indicates that the amount of the straight furrows increases. During the wear test at high temperature, the hardness of the aluminum matrix decreases due to the recrystallization and then the aluminum will be removed by the counterpart disc. The reinforcements distributed uniformly in the aluminum matrix have high bonding strengths with the matrix and can effectively sustain the external applied load, which enhances the wear resistance of the composites. While the strong particles e.g. α-Al2O3 and ZrC separated from the matrix, they act as debris in the wear surface. Therefore, there are some obvious furrows on the wear surfaces (Figure 5d-5f). From Figure 5d-5f, it is concluded that when the C/ZrO2 molar ratio increases, the contents of the iron slightly decrease, which indicates that the adhesive resistance of the composites slightly decrease and the oxidation wear becomes the important mode in the complex wear mechanisms. However, when the applied load increases to 70 N, there are metal follows on the wear surface as shown in Figure 6a. Its corresponding EDS pattern in Figure 6b also indicates that many iron elements have transferred from the counterpart disc to the wear surface and that the content of oxygen increases greatly, which shows the adhesion and oxidation increase significantly. Therefore, when the temperature is at 473 K and the applied load increases to 70 N, the friction between the pin and disc becomes unstable and even cannot be able to be tested. It is demonstrated that the adhesive wear becomes a dominate wear mode of the hybrid wear mechanisms of the composites. Figure 6: SEM micrographs (a) and corresponding EDS patterns (b) of the wear surfaces with the C/ZrO2 molar ratio of 1.0 under the wear test conditions: applied load=70 N; test temperature=473 K; sliding velocity=0.7 m/s.

The influences of C/ZrO2 molar ratio, sliding velocity and applied load on the tribological behavior of the composites made by reaction method in an Al-ZrO2-C system were investigated by pin-on-disc dry sliding wear tests at elevated temperatures. Some conclusions are as follows: