Copyright: © 2015 Garshin AP, et al. This is an open-access article distributed under the terms of the Creative Commons Attribution License, which permits unrestricted use, distribution, and reproduction in any medium, provided the original author and source are credited.

Al2O3 based composites have been extensively studied because of their excellent properties such as high hardness, low electrical conductivity, good chemical stability and oxidation resistance. Most researches focus on particle-dispersed Al2O3 composites in order to improve their mechanical properties including flexural strength and fracture toughness. The second phase particles contain SiC [1], ZrO2, TiN/TiC/TiO2, BN and metal particle such as Cr providing a fine-grained microstructure through adding particles, the strength is enhanced. The fracture toughness is improved due to crack deflection, micro crack, and grain bridging. Al2O3 ceramic has a good sintering property, but excessive addition of carbide or nitride results in the generation of pores [2].

In the experiment the initial charge was prepared from silica sand, aluminum powder and petroleum coke in accordance with assumed stoichiometric ratio (equation 2). As silicon oxide quartz sand was used with SiO2 content not less than 99.1% and Fe2O3 content not more than 0.25%. Aluminum and carbonaceous material was introduced into the charge in the form of aluminum powder of APV grade and low-sulfur petroleum coke with 80 - 85% content of active carbon. The process of obtaining the composite material out of the said charge was carried out in a laboratory resistance furnace of 160 kW power capacities, the working length of which was 1300 mm while its width was 1100 mm (Figure 1). 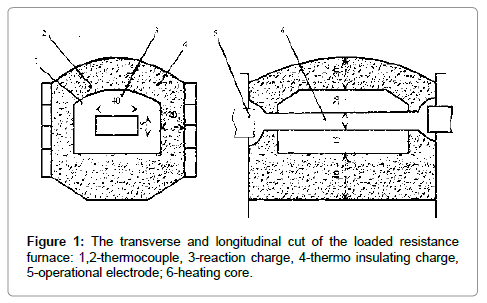 The temperature control in the furnace was performed by an optical pyrometer by means of special visual tube. From the products obtained through synthesis the samples were prepared by the method of dry grinding in a jaw crusher and from a fraction of minus 5 mm the fractions of 1600-1250 microns were plated, on which chemical, microscopic, micro X-ray spectrum analyzes were performed, micromechanical studies were carried out as well as operational characteristics of the grains of the composite material were identified in the grinding instrument according to the method set out in the works [2,3]. X-ray structural analysis was performed by the photo-method on the apparatus URS-55 in copper, filtered radiation, in Debye camera. The study of the microstructure was performed on micro sections, prepared on a cast-iron lap with the use of the diamond pastes of ASM 20/14-ASM 1/0 grades, the samples were photographed by the microscopes MIM-8 and PMT-3 with 500X zoom.

When studying micro-mechanical properties of the composite material with the use of PMT-3 device we have identified micro hardness and micro strength of separate phases of silicon carbide and corundum as well as of the composite abrasive material with SiC-Al2O3 composition according to the method [2,3] when there is load on the indenter of Vickers pyramid as 100 N.

Micro X-ray spectrum analysis was performed on micro analyzer MAP-2 with the use of metallic aluminum and silicon carbide as the standard. Physical and mechanical characteristics were identified by means of instrumentation and control methods of grinding materials, those methods were developed by us [2-4].

The chemical and X-ray studies have revealed that all the objects taken from the zone of the synthesis products contain 35-40% SiC and 60-65% Al2O3. In all samples the aluminum oxide is in the form of α-A2O3 while silicon carbide is typically manifested as a mixture of cubic (β-SiC) and hexagonal (α-SiC) silicon carbide. By the analysis of the microstructure and the results of micro X-ray spectrum analysis the synthesized product represents the material with fine grained twophase structure (the size of the phases is from 2 to 40 microns) (Figure 2a): grey phase–corundum, light phase-silicon carbide. The areas of fine grained two-phase structure make from 30 to 80% in total volume of the products; up to 10% is formed by the areas of large entities of corundum and silicon carbide, in which the size of phases ranges from 50 to 200 microns and more (Figure 2b). 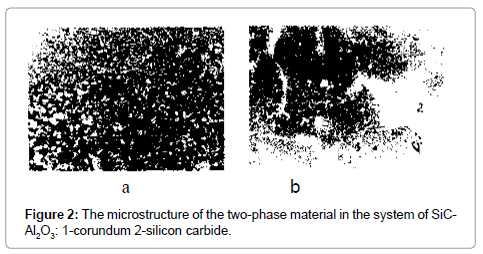 Figure 2: The microstructure of the two-phase material in the system of SiCAl 2O3: 1-corundum 2-silicon carbide.

Figure 3 shows the microstructure of the areas with fine and coarse particles of the two-phase systems of the composite material based on SiC-Al2O3 with prints of Vickers pyramid (Figure 3a-c) and areas of separate phases of corundum and silicon carbide (Figure 3d and e), at the same time among the systems of the composite material the areas of different inclusions are observed, too. The obtained results (Table 1) demonstrate that the composite material SiC-Al2O3 by its micro-hardness is close to SiC while by its micro strength it is significantly superior to both silicon carbide and corundum.

Physical and mechanical properties of the composite material SiCA2O3, obtained at different content of aluminum in reaction charge, are shown in Table 2.

The analysis of the data in Table 2 demonstrates that to the greater amount of aluminum in the charge the composite material of higher quality corresponds (micro strength, strength of single grains, relative cutting ability has higher values).

The results of the studies carried out in the present work allow us to conclude that we have obtained the new composite abrasive material SiC-Al2O3 with corundum matrix, the material that possesses the new properties different from both silicon carbide properties and corundum properties. That is why the composite material in question may be recommended for producing abrasive tools from it for processing (grinding) products made of S e hH-15 steel, iron-cast and titanium alloys. The studies aimed to determine the areas of the composite material SiC-Al2O3 application will be continued.