Dysadherin is a cell surface glycoprotein that was identified recently and found to be expressed in diverse types of cancer cells, but only in a small number of normal cells [1]. The human Dysadherin gene sequence is closely related to mouse gene related to ion channels (RIC).

Dysadherin is a member of the single-pass membrane protein family called FXYD protein family. These single-pass proteins are known to interact with and regulate Na+/K+-ATPase activities [2]. Prediction from the Dysadherin/FXYD5 cDNA sequence suggests that it has 178 amino acids arranged into signal peptide and extracellular, transmembrane and cytoplasmic tail domains [1,3]. In tumor cells, Dysadherin extracellular domain has a larger number of attached glycosides relative to the normal cells, which provide stability to the protein [4].

Increased Dysadherin expression has been reported in colon, pancreatic, stomach and breast cancer cells [1]. Dysadherin overexpression has also been reported in several other cancers such as gastrointestinal carcinoma and has been associated with poor prognosis and tumor progression [5-12]. Previous studies has reported that Dysadherin disturb the cell-cell adhesion by post-transcriptional down regulation of E-cadherin (cellular adhesion protein), thus enhancing formation of metastasis. In some of the clinical studies such as head-and-neck carcinoma [13,14], pancreatic ductal adenocarcinoma [15], tongue carcinoma [12] and thyroid carcinoma [16], a significant inverse relation between Dysadherin and E-cadherin was observed at the epithelial tight junctions. In other cancers such as lung cancer [17], non-small lung carcinoma [10,18], epitheloid sarcoma [9], thyroid carcinoma [8] breast cancer [19], colorectal carcinoma [11] and malignant melanoma [20], no inverse correlation between Dysadherin and E-cadherin was observed. This suggests that Dysadherin potentially has some unknown mechanisms by which it can effect tumor growth and progression. Additionally, overexpression of Dysadherin was recently reported to confer stem cell and tumorigenic potential of and and enhanced tumourigenic potential of hepatocellular carcinoma cells [21,22].

Colorectal cancer (CRC) is one of the most common types of cancer in high income countries. According to World Health Organization in 2012, CRC was ranked second and third most common cancer in women and men respectively, and was placed the second leading cause of cancer associated deaths in men and women (http://globocan.iarc.fr/Pages/fact_sheets_population.aspx).

CRC initiates locally, develops through the intestinal wall and metastasizes via blood and lymph vessels to lymph nodes and distant organs. Tumor growth pattern is classified as invasive and infiltrative (Figure 1). However, such classification is based on the semi quantitative evaluation by pathologists therefore results are prone to variation among the pathologists [23]. Previously, Franzén and Hahn- Strömberg [24] presented a computer based method for the quantitative determination of colon cancer growth pattern by using computer software. This method provides quantitative and reproducible data with a range of 1-5 for the tumor growth pattern that was named complexity index. A total of 45 formalin fixed and paraffin embedded colon cancer and paired normal patient samples were selected from the Örebro University Hospital tissue archives. Patients were diagnosed with colon carcinoma in 2002-2006. Samples were collected randomly both from men and women, unidentified and assigned numbers from 1-45. Rectal carcinomas were excluded in our study as most of the patients receive local radiations therapy prior to surgery thereby altering the tumor growth pattern. Ethical permission was approved by the Ethical committee at Örebro University Hospital, Örebro Sweden.

For RNA extraction paired tumor and normal colon samples were taken from each patient sample. Tumor cells rich area and normal colon cells on the FFPE block were outlined by the pathologist. A punch of 1 mm diameter was taken from the demarcated area and subjected to total RNA extraction by using RNeasy FFPE Kit as per instructions provided by the manufacturer (Qiagen Sample and Assay Technologies, Hilden Germany).

Total one microgram RNA in a 20 μl reaction mixture was subjected to the reverse transcript polymerase chain reaction (RT-PCR) by using High-Capacity Reverse Transcription Kit in accordance with the manufacturer’s instructions (Applied Biosystems, Foster City, CA USA). RT-PCR was carried in LifePro Thermal Cycler (Bulldog Bio, Inc. USA) with the following PCR conditions: at 25°C for 10 min, 37°C for 120 min and 85°C for 5 min. Synthesized cDNA was stored at -75°C prior to further use.

FFPE blocks from archived samples containing colon cancer were prepared. Envision technique was used for immunohistochemical staining. Sections of four micron were sectioned from FFPE cancer tissue blocks and mounted on (poly-lysine coated) glass slides. Mounted sections were deparaffinised in xylene, hydrated in descending concentrations of 99%, 96% and 70% ethanol, and washed in distilled water. Samples were preheated in Tris EDTA buffer PH 9.0 for half an hour in a microwave oven (680 W), followed by washing with the distilled water. Anti-cytokeratin (CK 8) from Bioscience (San José, USA), was used as a primary antibody at a dilution rate of 1:25. Prior to mounting, sections were transferred through a series of increasing concentrations of ethanol and xylene.

Tumor growth pattern was determined according to the method described by [24]. Images from the invasive front of immunohistochemically CK 8 stained tumor slides were captured by using Olympus ALTRA20 digital camera mounted on an Olympus BX40 microscope by using 10X objective lens (Olympus Soft Imaging System, Beijing China). Captured images stored in TIF format, and were processed and thresholded to get tumor cell clusters and tumor outlines (Figure 1). Tumor outlines were used to estimate fractal dimension. The values of tumor cell clusters and fractal dimensions were used to grade tumor complexity from 1 to 5. Where, 1 represents a smooth bordered tumor with no tumor cluster and 5 a highly irregular tumor border with multiple numbers of tumor islands. For each tumor specimen, depending upon the length of the invasive front of the tumor, on an average, 8 images with a range of 4-10 images were captured and analysed per sample. A total of 372 images were used to calculate the Complexity index (CI) of each tumor by evaluating the mean values of tumor cell clusters and fractal dimensions from each tumor image.

Mean and standard error of mean was calculated for the continuous variables while frequencies and percentages were determined for the categorical variables. We applied paired t test between normal and paired tumor tissue samples to evaluate differences in Dysadherin mRNA expression. To ascertain statistical correlation between dependent and explanatory variables, Pearson Chi square test was used between the groups provided that frequencies in all sub-groups are more than 5, otherwise Fischer exact test was applied. A P value of less than 0.05 was considered statistically significance. Figures of Dysadherin expression were constructed by using micro soft excel (MS excel 2010) while all statistical analyses were performed by using PSS version 20 software (SPSS, Inc, Chicago, IL, USA).

In this study we randomly selected 45 FFPE colon cancer tissue samples that were collected from 21(46.7) males and 24 (53.3) females patients with an average age and standard deviation of 74 and 10.19 respectively. About 75% (34) of the patient tumors were localized in the right colon and 51% (23) were low differentiated tumors. Tumor node metastasis (TNM) values showed that 80% of the tumors were at T3 stage, 44.4% of the tumor metastasized into local lymph nodes, but none of the patients had tumor metastasis into distant organs. Similarly 55.6% tumors were at Dukes stages of A and B. Detailed information on patient tumor clinical and pathological parameters is provided in table (Table 1). 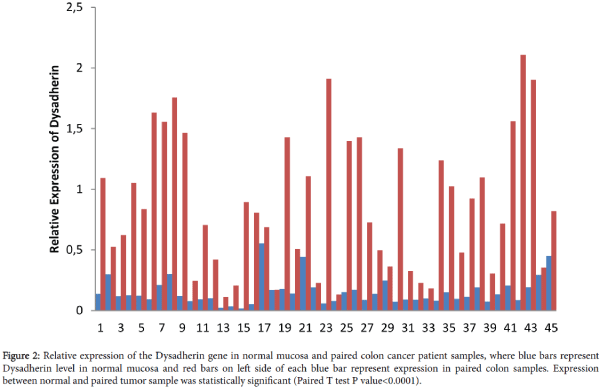 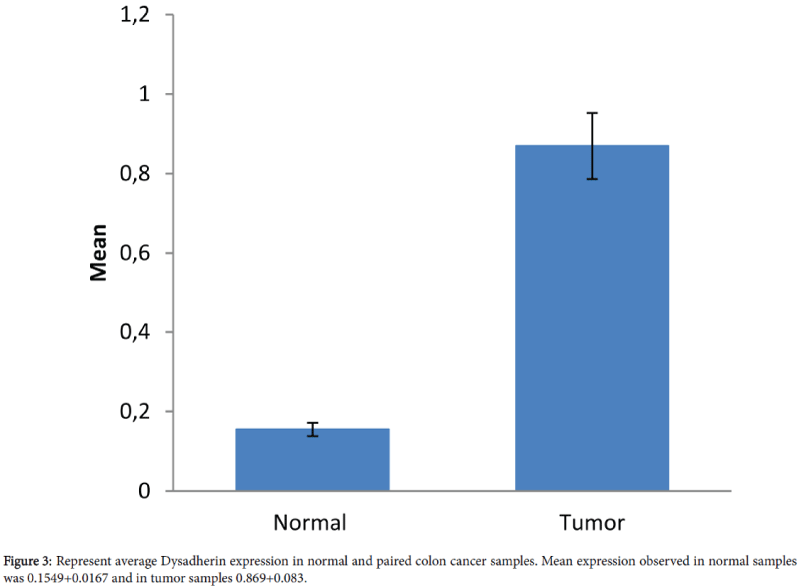 Correlation of Dysadherin expression and complexity index with clinicopathological parameters

Table 2: Correlation between Dysadherin and complexity index and different clinical and pathological parameter.

Reduced cellular binding is one of the primary steps in the metastasis of all types of cancers. Dysadherin is a relatively new tumor marker; its increased expression has been associated with the progressive tumors and poor patient prognosis in various types of carcinoma [1,8,11,26]. It is known that Dysadherin decrease cellular adhesion by down regulation of the E-cadherin, a cell-cell binding protein [1]. Although many studies have been reported an increased Dysadherin protein expression, but none of the conducted studies have evaluated the quantitative change in Dysadherin mRNA level [5-8,10,12,27] Furthermore, due to its effect on lowering cellular adhesion, increased Dysadherin expression may alter the growth pattern of the tumor. Therefore, in this study we evaluated the expression of Dysadherin in paired normal and tumor colon cancer samples and also estimated complexity index of the tumor.

We observed increased levels of Dysadherin mRNA expression in all tumor samples compared to the paired normal samples (Figure 2). Mean value of Dysadherin mRNA levels in tumor and paired normal tissue samples was 0.867+0.0829 and 0.155+0.0167 (P<0.0001), respectively (Figure 3). Our data is consistent with the earlier observation made in different studies in various carcinomas including colon cancer that the Dysadherin expression is variable in different tumor tissues [5,7,10,11]. It been reported that Dysadherin normally is not expressed in normal gastrointestinal cells including the large intestine [1,11,27]. However, in current study we showed that very low levels of the Dysadherin mRNA (0.155+0.0167) are present in the normal mucosa. This may be partially true considering Dysadherin ability in the regulation of the Na+/K+-ATPase pump which are present in the large intestine [2,28]. Alternatively, in the normal large intestine mucosa, the lower level of Dysadherin may be degraded quickly by micro RNAs before their translation into protein. Additionally, normal samples were taken from the adjacent tumor tissues, so tumor microenvironment may have some impact on the adjacent normal tissues.

Other clinical and pathological parameters were un-associated with Dysadherin expression which is in agreement with a previous study in CRC [11]. We also correlated to tumor growth pattern to determine if increased Dysadherin expression is associated with tumor complexity index, but results were statistically insignificance. This may be because those multiple factors are involved in determining the overall growth pattern of the tumor.

In conclusion, we showed that Dysadherin expression increase significantly in tumor samples and higher expressions were associated with lymph node metastasis and advanced Dukes stages.

Copyright: © 2016 Mannan A, et al. This is an open-access article distributed under the terms of the Creative Commons Attribution License, which permits unrestricted use, distribution, and reproduction in any medium, provided the original author and source are credited.