Mentha piperita concentrations based on LC50 were estimated against Rice weevil, Sitophilus oryzae the results indicated that an increase in the insecticidal effect of M. piperita essential oil against the insect species when formulated as a nano-emulsion the highest and fastest toxic effect were observed with M. piperita (4%) nanoemulsion via thin film residue method and treatment with wheat grains method, because of smaller particle size and increase biological activity due to increased surface area of emulsion droplets therefore more opportunity of the formulation to come in contact with the target insect. The nano-emulsion formulations of M. piperita essential oil containing surfactants were successfully created via the high-energy emulsification method. The formulation provided a nano particle-size, with the smallest size being 43.55 nm. The results concluded that M. piperita nanoemulsions may be used as an alternative for the control of other stored-product insect pests. They have the advantage of promising insecticidal activity and being eco-friendly and less toxic than synthetic pesticides.

Stored-grain insects in developing countries cause huge losses of stored-grain products, amounting to 5-10% loss in temperate regions and 20-30% in the tropical regions [1]. In Egypt, the annual loss in wheat due to stored insects is estimated as equivalent to half a million tons of which 12% is caused by the rice weevil alone [2].

The rice weevil, Sitophilus oryzae (Coleoptera: Curculionidae) is a major primary pest, of stored grain-based products, including maize, rice and wheat, particularly in the tropic regions [3,4]. This pest can cause considerable damage to stored grains and completely destroy kernels. Moreover, the product quality is affected by presence of eggs and dead insects, and holes on the grains [5]. According to the global economic estimation, the related costs of pests to stored food stuffs could reach to about 500 million USD per year [6].

Massive applications of conventional pesticides to control these insects result in adverse effects on beneficial organisms, leaves their residues in the food leads to severe risks to human health and environment, it reduced the populations of natural enemies and developed the insect resistance to synthetic insecticides [7,8].

Recently scientists pointed to use naturally occurring insecticides. many of these compounds are secondary plant substances (allelochemicals) including alkaloids, quinones and essential oils [9]. These active substances extracted from plants are effective against wide range of insects and act as toxicants, as insect growth regulator (IGR), repellents or as phagodeterrent [10]. These properties make them suitable bioinsecticides for organic agriculture and could be an alternative to those chemical insecticides.

Owing to the fact, the most essential oils used as flavoring agents possessing insecticidal properties showed ovicidal, larvicidal, adulticidal against several insect species [11,12]. One of the most effective plants against stored pests is Mentha piperita L. or peppermint, a plant from the Lamiaceae family, Mentha piperita oil possesses diversified potential in the areas of food, cosmetics, medicines, and pest control [13]. The essential oils extracted from M. piperita have also been reported as a source of botanical insecticides [14].

However, the major inconvenience of the use of essential oils are their chemical instability in the presence of air, light, moisture and high temperature that can determine the rapid evaporation and degradation of some active components [15]. A method to overcome these problems is the incorporation of essential oils into a controlledrelease nano-formulation which prevents rapid evaporation and degradation, enhances stability and maintains the minimum effective dosage/application [16]. In addition, this nano-formulation compared with bulk formulation is expected to be more effective, showed less toxicity towards non-target organisms and increased persistence of the active ingredient [17,18].

This study aims to evaluate the efficiency of M. piperita (EO nanoemulsion) as possible as protecting agents of wheat grains against infestation by the rice weevil, Sitophilus oryzae .

Tween 80, Acetone and Peppermint oil was purchased as pure oil from Department of Botany and microbiology, Faculty of Science, Alexandria University, Egypt.

Morphology of M. piperita nano-emulsion: To visualize the shape and morphology of the formulated M. piperita nano-emulsion oil, transmission electron microscopy (TEM) at the EM Unit in the Faculty of Science, Alex. Univ. was carried out. One drop of emulsion was negatively stained with ethanol and was positioned on a copper grid. The TEM micrographs were acquired using a transmission electron microscope (JEOL JEM-1400Plus) with a tungsten source and operating at 80 kV.

Contact toxicity bioassay using thin film residue: The insecticidal activity of the tested essential oils against the adults of S. oryzae was determined by direct contact application [22,23]. A series of dilutions of M. piperita essential oils were prepared using acetone as a solvent. Aliquots of 1 ml of the dilutions were applied on the bottom of a glass Petri dish (9 cm diameter) to give deferent concentrations from the bulk of M. piperita and M. piperita nano-emulsion. After evaporation of the solvent for 2 min, 20 adults of tested insects were separately placed into each Petri dish. Control dishes with and without solvent were used. All treatments were replicated three times. Mortality percentages were recorded after 24, 48 and 72 h of treatment and LC50 values were calculated according to Finney [24]. The toxic index (TI) of the tested EO nano-emulsion or free EO was calculated by the following equation according to Yamamoto et al. [25] and Sun [26]:

The compound has TI less than 1 (TI1) have high toxicity.

Contact toxicity bioassay using treatment wheat grains with free M. piperita (EO) and M. piperita (EO) nano-emulsion: The essential oils were admixed with grains according to Qi and Burkholder [22]. Wheat grains were treated with both M. piperita (EO) and (EO nanoemulsion) at different concentration (0.8, 1.6, 3.3, and 13.3 ml/kg). The M. piperita (EO) and (EO nano-emulsion) were dissolved in acetone (2 ml) then mixed manually with grains (60 gm in 0.4-Litter) glass jars and were divided into three equal replicates. Notably, it has been previously elucidated that when the solvent evaporates, the nanoemulsion retains its properties [27,28]. After evaporation of acetone, the treated grains were infested by newly emerged adults (10 pairs). Mortality was recorded every week for two weeks. The number of progeny was recorded after six weeks of infestation.

Mortality rate was estimated and corrected according to formula [29] as follows: 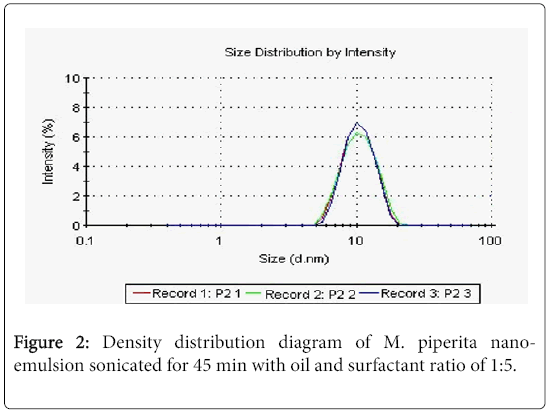 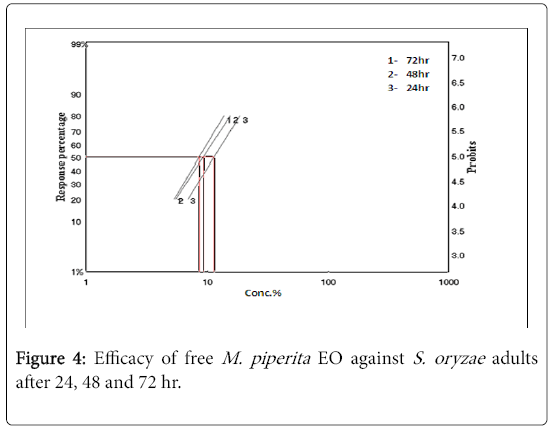 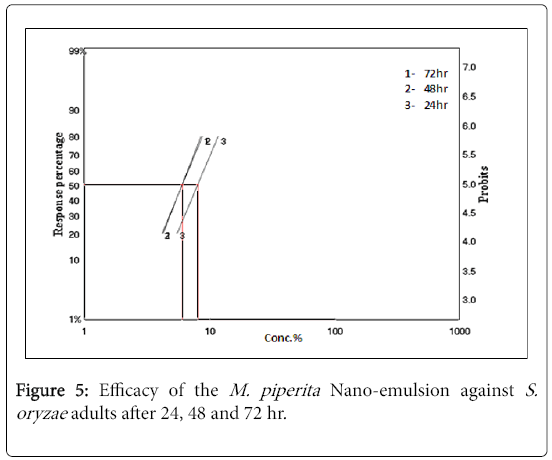 Figure 5: Efficacy of the M. piperita Nano-emulsion against S. oryzae adults after 24, 48 and 72 hr.

Mortality of S. oryzae via Contact toxicity using treatment with wheat grains method, were significantly affected by the exposure time, all main effects (formulations and concentrations) and associated interactions (Table 3).

Among the bulk of M. piperita (EO) the highest mortality recorded after one week for S. oryzae exposed to 13.3 ml/kg and after two weeks of exposure, 1.6 ml/kg. The results also showed significant differences in the adult emergence of S. oryzae in M. piperita (EO) and M. piperita nano-emulsion after 6 weeks from treatment (Table 3).

Few reports are available on the insecticidal activity of M. piperita essential, with fast and high mortality, against stored-product pests. This study showed an increase in the insecticidal effect of M. piperita essential oil against the insect species when formulated as a nanoemulsion. In the present study, the results are in almost agreed with the results stated by earlier investigators. The differences in chemical components may be due to variations in environmental, climatic and geographical which effect on chemical composition of M. piperita . Formulating essential oils (EOs) into nano-emulsion which is transparent and can be used in food and beverage products, thereby, decreasing the amount of EOs required [30]. The TEM image of M. piperita confirmed the results that show the spherical shape and a good dispersion of droplets nano-emulsion agreed with Sugumar et al. [20] and Ostertag et al. [31] who reported that good nano-emulsion had droplets size between 20-200 nm. The tested M. piperita coarse emulsion was turbid and milky white in color due to droplet size in micrometer range. After sonication, the emulsion became optically transparent. This decrease in turbidity was due to minimized droplet diameter after sonication which results in relatively weak scattering making the emulsion system optically transparent agreed with McClements [32]; Pey et al. [33]; Abouelkassem et al. [34].

The bioassay of the nano-emulsion formulations of M. piperita demonstrated toxicity effects on S. oryzae. The insecticidal effects of the formulations varied with the insect species, concentration of the formulations, exposure time and the method of application. The results of contact toxicity in thin film residue method using glass Petri dish and contact toxicity using treatment with wheat grains method, showed that increasing mortality with increasing concentration and the exposure time for the tested insect [35-38]. The possible explanation for these results is the absorption of the toxic substance increases through insect’s body by increase time and concentration. The results indicated that the S. oryzae very sensitive when exposed to M. piperita (EO) and (EO nano-emulsion) [39-44]. Results agreed with the effectiveness of M. piperita EO with concentration 1.0% against S. oryzae evaluated by Magdy et al. [45], which lead to about 96.6% mortality after 24 hr and 100% mortality after 84 hr of exposure using thin film residue method.

Among the nano-emulsion formulations, the highest and fastest toxic effect were observed with M. piperita (4%) nano-emulsion against S. oryzae via thin film residue method and treatment with wheat grains method, because of smaller particle size and increase biological activity due to increased surface area of emulsion droplets therefore more opportunity of the formulation to come in contact with the target insect. Whereas, the lower mortality caused by M. piperita EO with the biggest particle size indicates that the smaller the particle size, the greater the probability of higher efficacy.

The nano-emulsion formulations of M. piperita essential oil containing surfactants were successfully created via the high-energy emulsification method. The formulation provided a nano particle-size, with the smallest size being 43.55 nm. The M. piperita with the smallest particle size was found to be most effective in controlling S. oryzae adults. Overall, the present study proved that M. piperita nanoemulsions are effective in controlling S. oryzae adults. These nanoemulsions may be used as an alternative for the control of other storedproduct insect pests. They have the advantage of promising insecticidal activity and being eco-friendly and less toxic than synthetic pesticides.

Copyright: © 2018 Massoud MA, et al. This is an open-access article distributed under the terms of the Creative Commons Attribution License, which permits unrestricted use, distribution, and reproduction in any medium, provided the original author and source are credited.