Silicon carbide (SiC) is a well-known ceramic due to its excellent spectral absorbance and thermo-mechanical properties. The wide band gap, high melting point and thermal conductivity of SiC is used in high temperature applications. The present study was undertaken to investigate the effect of biofield treatment on physical, atomic, and structural characteristics of SiC powder. The control and biofield treated SiC powder was analysed using X-ray diffraction (XRD), particle size analyzer, surface area analyzer, and Fourier transform infrared (FT-IR) spectroscopy techniques with respect to control. The XRD pattern revealed that crystallite size was significantly increased by 40% in treated SiC as compared to control. The biofield treatment has induced changes in lattice parameter, density and molecular weight of atoms in the SiC powder. Particle size was increased upto 2.4% and the surface area was significantly reduced by 71.16% in treated SiC as compared to control. The FT-IR results indicated that the stretching vibrations frequency of silicon-carbon bond in treated SiC (925 cm -1 ) was shifted towards lower frequency as compared to control (947 cm -1 ). These findings suggest that biofield treatment has substantially altered the physical and structural properties of SiC powder.

Ceramics have been used for many years in structural, abrasive and electronics devices; and mostly are metal oxides. However, nowadays new ceramics like nitrides, carbides also grab significant attention due to their unique characteristics, such as high melting point, hardness and excellent mechanical and electronic properties. The silicon carbide (SiC), naturally exists in about 250 crystalline forms [1]. Out of them, two most commonly recognized forms of SiC are: cubic (β-SiC) and hexagonal (α-SiC) (Figure 1). The α-SiC crystalline form exists : 2H-SiC, 4H-SiC, and 6H-SiC as per number of hexagonal layer present in a unit cell; for instance 6H-SiC have six layers [2,3]. In microelectronic devices, and high temperature applications, the energy band gap and electron mobility of SiC plays a crucial role, which are closely associated with its crystal structure, lattice strain, dislocations density and crystallinity [4]. The SiC powders can be synthesized via various processes such as Acheson process (solid state reaction between sand and coke at 2500oC), liquid phase reactions, carbothermal reduction method, physical vapour deposition, pyrolysis, and chemical vapor deposition [5,6]. Most of the above processes require a very high temperature (>1500oC) for better control over particle size, surface area and crystal structure of SiC. Recently, some other techniques such as high energy milling, mechanical alloying (or ball milling), reaction milling also have been employed to control the particle size, surface area and crystal structure parameters [7-9]. 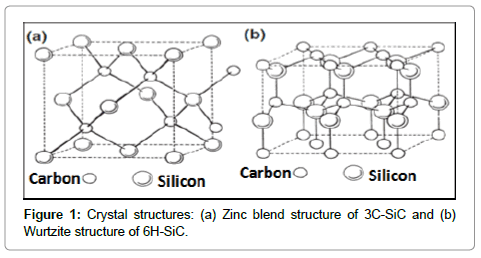 The biofield is a cumulative outcome of electric and magnetic field, exerted by the human body [10]. It is generates through some internal dynamic processes such as blood flow, lymph flow, brain and heart function in the human body. Recently, Mr. Trivedi’s biofield has made significant breakthrough in various research areas such as material science [11-18], biotechnology [19,20], microbiology [21-23], and agriculture [24-26]. This biofield treatment had also changed the particle size, surface area and lattice parameters in various ceramic powders such as Vanadium Pentoxide (V2O5), zirconium oxide (ZrO2), and silicon dioxide (SiO2) [16,17].

Based on the knowledge of existing literatures and considering the industrial significance of SiC, in present work an effort has been made to study the impact of biofield treatment on physical and structural properties of SiC.

XRD analysis was carried out on X-ray diffractometer Phillips, Holland PW 1710 system, which had a copper anode with nickel filter. The radiation of wavelength used by this XRD system was 1.54056 Å. The data obtained from XRD were in the form of a chart of 2θ vs. intensity and a detailed Table 1 containing peak intensity counts, d value (Å), peak width (θ0), relative intensity (%) etc. The PowderX software was used to calculate lattice parameter and unit cell volume. The crystallite size (G) was calculated by using formula: 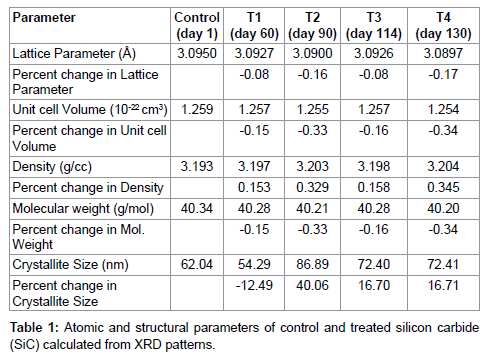 Where, ac and at are parameter value of control and treated powder samples respectively.

FT-IR analysis was done on Shimadzu, Fourier Transform Infrared (FT-IR) Spectrometer with frequency range of 300-4000 cm-1. The structural changes of control and treated samples T1, and T2 of SiC were evaluated on day 60 and day 100 respectively.

The lattice parameter of unit cell, volume of unit cell and densities of SiC were computed from XRD diffractogram using Powder X software, and results are reported in Table 2, Figures 2 and 3. It was found that lattice parameter of unit cell was reduced upto 0.17% in treated sample as compared to control (Figure 2). The decrease in lattice parameter in treated sample led to decrease in volume of unit cell up to 0.34% and consequently increased the density by 0.354% in treated SiC as compared to control (Figure 2). Furthermore, the percent change in lattice parameter and volume of unit cell in other treated SiC samples were found negative (Figure 4), which indicates that compressive stress may be applied on unit cell of SiC [27]. This compressive stress may be generated due to high energy milling through biofield treatment. Furthermore, the strain was existed even 130 days after biofield treatment (T4), which indicates that treated powder had compressive residual stress (Figure 2). Generally, residual stress occurs either through crystal structural change or plastic deformation. Since XRD result showed negative strain; and same crystal structure in control and treated SiC powder, which indicates that this compressive residual stress may be due to plastic deformation in treated SiC powder. Furthermore, the increased density should increase the molecular weight, but it was not observed in our experiment. Rather, the molecular weight of treated SiC sample was reduced by 0.354% as compared to control (Figure 2). It indicates that the number of protons/neutrons may alter after biofield treatment. It can be possible if weak reversible nuclear reaction takes place in treated SiC [28]. Moreover, the crystallite size (coherently scattering domains size) was reduced by 12.70% in treated T1 as compared to control (Figure 3). The presence of internal compressive lattice strain in SiC could be responsible to move the dislocations to the slip planes and built in stress concentration. This stress concentration might be increased to such extent and resulted into fracture the crystal at the sub boundaries and decreased crystallite size. Contrarily, the crystallite size was enlarged by 40.06%, 16.70%, and 16.71% in treated samples T2, T3 and T4 respectively (Figure 3). The increased crystallite size may be due to the crystallite growth through the movement of crystallite boundaries. Thus, it is hypothesized that high energy milling through biofield treatment may induce the movement of crystallite boundaries that results into large crystallite size. Kityk et al. reported that crystallite size and band gap are inversely proportional to each other [29]. Thus, it is speculated that the change in crystallite size through biofield treatment may led to alter the band gap in SiC powder. 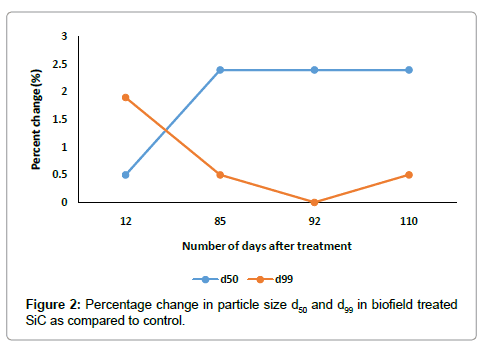 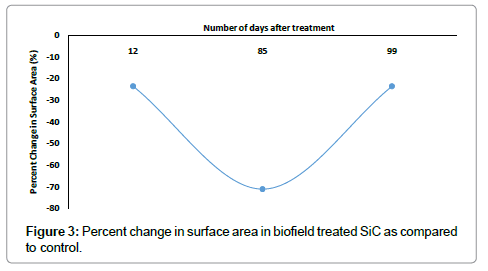 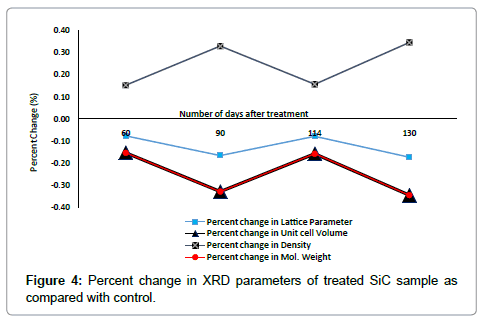 The particle size result of control and treated samples are presented in Table 2 and Figure 4, which included the average particle sized50 and d99 (size below which 99% of particles were present) and percent changes in treated SiC powder as compared to control. It was found that the average particle size d50, increased up to 2.4% in treated SiC, whereas d99, increased by 1.9% as compared to control (Figure 4). The graph showed that the percent change in d50, increases and d99, decreases with increase in number of days after treatment. It indicates that, the coarser particles may be fractured and transformed into finer particles after biofield treatment. Furthermore, the specific surface area was significantly decreased by 23.6%, 71.16% and 23.60% on day 12, day 85 and day 99, respectively as compared to control (Figure 5). This is possible when sharp corners with irregular shape like hills and valleys on the particle surfaces become rounded. Additionally, it is also possible that the smaller particles may come together and welded through surface diffusion [18]. 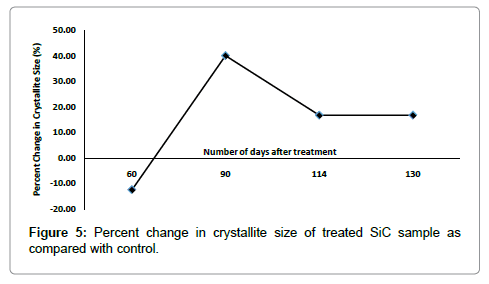 IR spectrum of control and treated samples are illustrated in Figures 6 and 7, respectively. The absorption peaks observed around 750 cm-1 and 937 cm-1 in treated and control samples, respectively, which were attributed to Si—C bond stretching vibrations [30]. Moreover, it was observed that absorption peaks at 947 cm-1 (control) was slightly shifted to lower wavenumber at 937 cm-1(T1) and 925 cm-1(T2) after treatment, which might be due to reduced bond strength and changed inter-atomic interactions through biofield treatment. 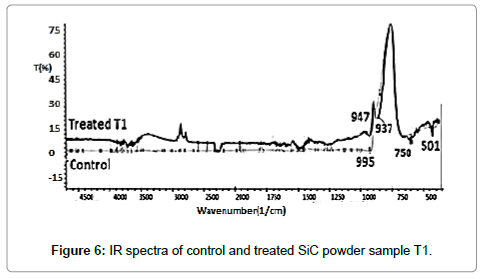 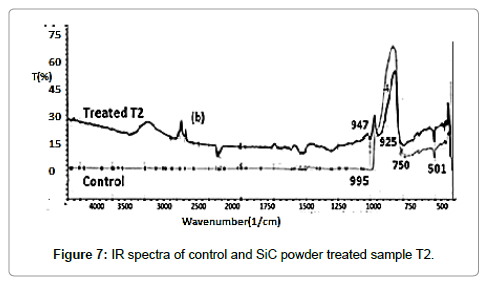 We thank Dr. Cheng Dong of NLSC, Institute of Physics, and Chinese academy of Sciences for supporting in using PowderX software for analysing X-ray Diffraction results.