Objectives: The present study was done to evaluate the effect of cardiac rehabilitation (CR) on heart rate recovery (HRR) in Egyptian patients with acute myocardial infarction after successful primary percutaneous coronary angioplasty (PPCI)
Patients and methods: This study was conducted on sixty adult patients who were selected from CR clinic in Ain Shams University hospital (cardiology department) between November 2015 and November 2016. They were divided into two groups: Group I included 30 patients who joined and completed the CR program, Group II included also 30 patients who joined CR program but did not complete the course of rehabilitation. These patients were almost 15 days post successful primary PCI with single vessel disease. They did exercise test before CR to calculate HRR at one and two min (HRR1 and HRR2 respectively) and to rule out residual ischemia. Exercise test was repeated after the program.
Results: We found a highly significant improvement in HRR1 and HRR2 in group I, and in lipid profile parameters compared to group II. There was no significant difference between the two groups regarding Left ventricular function assessment.
Conclusion: The present study found that CR program improves HRR1, HRR2, and Lipid profile so CR program should be implemented in routine management of Egyptian ischemic patients.

Coronary artery disease (CAD) is the leading cause of death all over the world [1].

In addition to the well-established pharmacological and interventional strategies for management of patients with CAD, Lifestyle modification approaches are becoming increasingly recommended to form the basis of all secondary prevention strategies of CAD [2].

Appropriately planned Cardiac rehabilitation (CR) programs have become an integral part of the standard of care for patients with CAD in evidence based cardiology. Their scope has expanded from just an emphasis on exercise therapy to include secondary prevention strategies managing risk factors; nutritional, psychological, behavioral and social factors that can affect patient outcomes [3].

Heart rate recovery at first and second min (HRR1 and HRR2) are defined as the average drop in the heart rate 1 min and 2 min respectively after the termination of exercise [4,5]. HRR ≤ 12 bpm at 1st minute for upright position and ≤ 22 bpm at 2 min for sitting position are considered abnormal [5].

Change in HR during exercise and recovery from exercise is the function of an accurate balance between sympathetic and vagal activity. An attenuated HRR after exercise is thought to be a marker of reduced vagal activity (4). A low HRR following a maximal exercise test is a predictor of mortality including sudden cardiac death in healthy adults independent of the workload achieved during the test, presence or absence of myocardial perfusion defects and HR changes during the test [5-8].

There is a growing body of evidence that exercise training as a part of CR can improve HRR in ischemic patients, which can positively affect their prognosis.

To our knowledge, no published studies are available showing the effect of CR on HRR in our population. Our study aimed to assess the effect of CR program on HRR in Egyptian patients with acute myocardial infarction after successful primary percutaneous coronary intervention (PPCI).

This study was conducted in CR center in Ain Shams University hospital (cardiology department) between November 2015 and November 2016 to investigate the effect of CR program on heart rate recovery in patients with acute MI post successful primary PCI.

Group I: Included 30 patients who joined and completed the CR program.

Group II: Included 30 patients who joined to CR program but did not complete the course of rehabilitation (control group).

These patients started CR program 15 days post successful primary PCI after MI with single vessel disease. The procedure was explained to the subjects and informed written consent was obtained. In order not to affect the results of the study, patients on beta blockers or other ratereducing drugs continued using the same doses during the study period.

The following patients were excluded from the study.

Patients with physical disability that prevent participation in exercise program

2. Informed consent was obtained from all patients

3. Initial exercise stress test: All patients were in sinus rhythm and free of arrhythmia. Before CR program they were subjected to symptom limited exercise test (modified Bruce protocol) to exclude any residual ischemia and calculate baseline HRR1 and HRR2. Another symptom limited exercise test was done post CR program to calculate HRR1 and HRR2 post program.

HRR2=PHR-HR at second min from stopping the exercise test.

4. Cardiac rehabilitation components and exercise training prescription: Cardiac Rehablitation programme was performed to the participants in group I with an integrated multidisciplinary team consisting of qualified and competent Practitioners, led by a clinical coordinator at Ain Shams University Hospital. The Cardiac Rehablitation programme consisted of exercising twice during 8 weeks. Patients were allowed 30–60 min for each session, which included a warm-up of at least 10 min, followed by exercise for 20 min and cool down period of 10 more min. The intensity was prescribed in relation to one’s target heart rate (Heart rate reserve method) based on the percentage of heart rate reserve as suggested before [9].

In addition to supervised exercise, home-based exercise, counseling, and education about stress management, smoking cessation, nutrition, and weight loss were also incorporated into this phase. Lifestyle changes were encouraged and supported with a view to returning to work.

Group II patients were were not able to enroll in CR program for several reasons, mostly logistic. They were given instructions to continue physical activity and to attain a healthy lifestyle.

Data were collected, revised, coded and entered to the statistical package for social science (SPSS) version 21 and the following were done:

The Comparison between two groups with qualitative data were done by using Chi-square test.

The comparison between two paired groups with quantitative data and normally distributed was done by using paired sample t-test.

The p-value was considered significant as the following

Our study was a prospective study that included 60 consecutive patients presented to cardiac rehabilitation unit at Ain Shams University hospital after successful primary PCI for ST segment elevation myocardial infarction (STEMI) with a single vessel during the period between November 2015 and November 2016.

Upon comparison of the procedural variables between the two groups, we found no significant differences regarding the culprit artery, type of stent used, pain to needle time and thrombolysis in myocardial infarction (TIMI) flow after PPCI (Table 1). 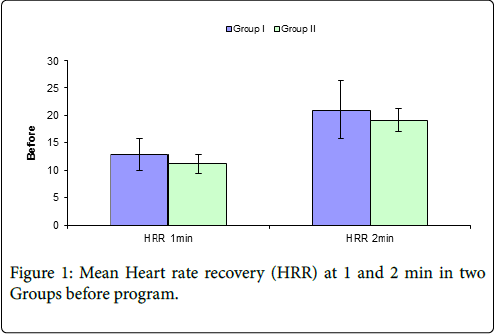 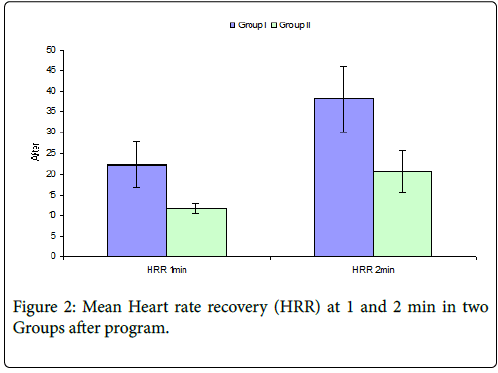 The benefits of exercise-based CR on cardiovascular risk factors, QOL, exercise tolerance, cardiac morbidity and mortality have been widely established in CAD patients [1]. The aim of this study was to determine the effect of CR program on HRR in patients with acute MI post successful primary PCI, and its potential effect on risk factors control.

In general, our study showed that lipid profile improved in both groups. However patients of the rehabilitation group had achieved significant reduction when compared to the control group after the program in TGs level (p-value 0.04) and highly significant increase in HDL level (p-value<0.001). This agreed with previous publications that emphasized the importance of CR program (lifestyle management and supervised exercise) in improving lipid profile [1,10]. In our study, both groups were taking lipid lowering drug therapy as prescribed by the physicians. So improvement in lipid profile in group I and group II was mostly due to effect of statins. The better improvement of lipid profile in Group I could be attributed also to the greater effect of exercise, prescribed medications and healthy life style education on the rehabilitation group. Such factors were defective in the control group.

In the current study, the group exposed to CR program showed improvement in their resting heart rate at the end of the program compared to the initial assessment. This is in contrast to the control group. (P value<0.001 and 0.4 respectively). Such effect could not be explained by the effect of medications only as both groups were on adequate evidence-based medications, but could be attributed to the effect of regular training. Tsai and his group found similar results after CR program in a smaller number of post CABG patients [11].

According to our data, the left ventricular function, measured by echocardiography, improved in both groups significantly with no statistical difference between the two groups. This could be explained by the beneficial effect of successful revascularization in both groups at the time of presentation. In the literature, similar results were found post MI [12] and after elective PCI [13].

The main aim of our study was to assess the change in HRR1 and HRR2 before and after CR, compared to the other group who did not undergo CR. Our study found that Group I showed highly significant improvement in the mean HRR1 and HRR2 after the program (pvalue< 0.0001 in both). However mean HRR1 and HRR2 in follow up data of Group II didn’t display any significant change (p-value=0.083 and 0.077 respectively).

The improvement in HRR in our study was supported by Hai and his colleagues [7] who investigated the effect of change in HRR after exercise training on clinical outcomes in MI patients. The study included 386 consecutive patients with recent MI who were enrolled into CR program. All patients underwent symptom-limited treadmill testing at baseline and after 8 weeks of CR and were prospectively followed up in the out patients clinic. Treadmill testing revealed significant improvement in HRR after 8 weeks of exercise training (17.5 ± 10.0 to 19 ± 12.3, p=0.011) Moreover, those who failed to improve their HRR1 ≥ 12 bpm had significantly higher mortality on follow up for 79 ± 41 months.

Another study agreed with our results was done by Francesco and coworkers [14] who investigated the effect of exercise based CR on HRR1 in elderly patients after MI. This was a prospective observational study including 268 older patients after AMI, subdivided in two groups. Group A were enrolled in an exercise training program and Group B were discharged with generic instructions to continue physical activity. At 3 months follow up, group A showed an improvement in HRR (from 13.5 ± 3.7 to 18.7 ± 3.5 bpm, p-value=<. 001). No changes in HRR were observed in group B patients.

The impact of CR program on HRR which was achieved in our patients agreed with results of other studies that involved chronic ischemic patients. In these studies, there were significant improvements in HRR after CR programs [15,16]. This improvement was found to be related to the number of sessions performed [17].

In summary, our results showed that 12 weeks of two-weekly sessions of CR program are already sufficient to obtain improvement in HRR1 and HRR2 and decrease resting heart rate in Egyptian patients with recent primary PCI for myocardial infarction.

All patients diagnosed with MI and did primary PCI should participate in a well formed consistent cardiac rehabilitation program. Further studies are needed not only to confirm our data in larger population with different demographic and clinical characteristics and with an extended follow up, but also to evaluate the effect of different core components of cardiac rehabilitation program on the improvement recorded on the ischemic burden.

The present study included a single medical center (Ain Shams University Hospitals) with a relatively small number of patients, who were characterized by predominantly male gender. There is a lack of long term follow up. Another limitation is that this study was not powered enough to assess cardiovascular morbidity and mortality.

We express our thanks to the cardiac rehabilitation team (Nurses and junior physicians) in Cardiology department, Ain Shams university for the great help in performing the study and their care of the patients.

Copyright: © 2017 Shabana AM, et al. This is an open-access article distributed under the terms of the creative commons attribution license, which permits unrestricted use, distribution, and reproduction in any medium, provided the original author and source are credited.