Copyright: © 2017 Adeyeye AS, et al. This is an open-access article distributed under the terms of the Creative Commons Attribution License, which permits unrestricted use, distribution, and reproduction in any medium, provided the original author and source are credited.

The study assessed the response of three soybean varieties: (TGX 1740 - 2F, TGX 1842 - IE, and TGX 1448- 2E) to three fertilizer treatments (4 t/ha compost, 30 kgN/ha urea, 2 t/ha compost+30 kgN/ha urea and a control) with or without Rhizobium Inoculation using strain R.25B+2180A. The experiment was a randomized complete block design with three replications. Data collected on vegetative, reproductive and grain yield parameters were subjected to analysis of variance ANOVA at 5% probability level. Fertilizer effects were significant on all the parameters assessed. In this study, soybean grain yield varies from 0.2 t/ha in plants nourished with 30 kgN/ha to 0.96 t/ha in plants that received 4 t/ha compost. Inoculation of soybean seed with rhizobium significantly improved the grain yield of soybean. Inoculated plants produced grain yield that is 35% higher than non-inoculated ones. The interactive effect of fertilizer types and inoculation was not significant on soybean grain yield and yield parameters. It was concluded that the use of 4 t/ha compost in combination with appropriate rhizobium strain could be a good agronomic practice for the production of high quality grain in soybean.

Soybean (Glycine max (L.) Merrill) is a legume of very high nutritional value especially in Nigeria because of the limited animal protein in human diet [1]. The worldwide recognition of soybean is mainly due to its high nutritional value and high seed protein content of about 38-42% [2]. To improve the yield and quality of soybean seeds, many cultural practices had been reported in different countries of the world, most especially rhizobium inoculation, fertilization with organic and inorganic materials [3,4]. Organic manure in sufficient quantities release nutrients rather slowly and steadily over a long period and also improves the soil fertility status by activating the soil microbial biomass [5,6]. The use of organic manure is limited by the huge quantities required in order to satisfy the nutritional needs of crops in view of its low nutrient content. Such huge quantities are obviously not obtainable and even if they were, transportation and handling costs would still constitute a major constrain, Also the use of inorganic fertilizer is on the decline by the farmers due to high cost and scarcity. The perennial fertilizer scarcity experienced in the country is partly attributable to the high cost. In order to address the bulkiness of organic materials, and the high cost of inorganic fertilizers complementary use of organic and mineral fertilizers has been recommended for long term cropping in the topics [7,8]. High and sustained crop yield can be obtained with judicious and balanced N fertilization combined with organic matter amendment [4,9].

Seed inoculation with Rhizobium strain enhances nitrogen fixation in soybean whether cultivar is promiscuous or not and several researches reported that significant yield increase were obtained by inoculation of soybean with appropriate bacteria before sowing [10-12]. The effectiveness and efficiency of nitrogen fixing process however depend mainly on the status of native soil rhizobium population and their compatibility with the soybean planted in the given soil. Olufajo et al. also reported the responses of five promiscuous nodulating soybeans to some selected Bradyrhizobial strains and concluded that there was a beneficial effect from nodulation of all the above soybean cultivars especially in the soils having low populations in indigenous rhizobia. Also yield and yield components are complex traits, which exhibit polygenic or quantitative inheritance pattern [13]. Quantitative traits are govern by multiple genes whose expression is greatly influenced by exposed external environment and thus it results into scale or rank shift of their performance [13,14]. Reports are scanty on the use of fertilizers with Rhizobium inoculation on the growth characteristics and yield of soybean. Hence the general objective of this study was to develop a technological package of fertilizers application with Rhizobium inoculation for the production of soybean for maximum grain yield in Nigeria.

Two years field trial was conducted to assess the effects of fertilizer application and Rhizobium inoculation on the growth and grain yield of soybean varieties. The field was ploughed, harrowed and the layout was done. The total land area for the experiment is 28 m × 12 m=(336 m2). The plot size is 3 m × 2 m with planting spacing of 60 cm × 5 cm. There were 1 m gaps between sub plots, while 2 m gaps were left between replicates. The treatments tested were three soybean varieties: TGX 1740-2F, TGX 1448-2E, and TGX 1842-1E: four types of fertilizers: 0 t/ha compost, 4 t/ha compost, 30 kgN/ha urea and 2 t/ha compost+30 kgN/ha and two levels of inoculations (inoculated (+) and non-inoculated (-). The experiment was a 3 × 4 × 2 factorial fitted into randomized complete block design with three replicates.

The compost was prepared from maize stover and poultry manure combined in ratio 3:1 maize stover: poultry manure on dry weight basis [15]. The heap was watered and turned every fortnight, while the PH and temperature were taken weekly. The compost treatments were applied a week before planting while urea fertilizer in both sole and where it is combined with compost were applied a week after planting. Inoculation of seeds was done using Rhizobium strain R.25B+2180A which is peat base inoculants. It was thoroughly mixed with sugar coated soybean seeds and later air-dried (15 g of inoculums was applied to 1 kg of seeds).

Destructive sampling was done at 2, 4, 8, 10, 12 and 14 weeks after planting, where 3 plants were taken per plot for measurement. The parameters measured were: stem height per plant, Number of leaves, nodes, branches and flowers, dry matter weight of root, stem and leaves, and grain yield. Data collected were subjected to analysis of variance (ANOVA) and the means separated using Duncan Multiple Range Test at 5% level of probability. 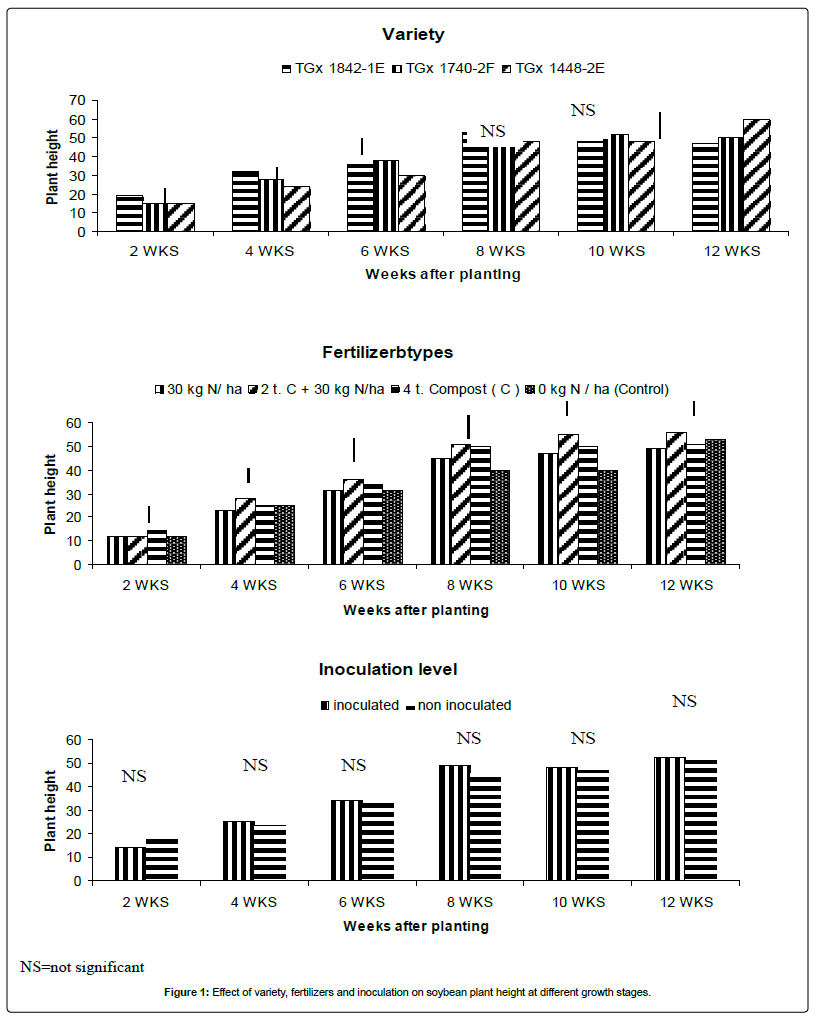 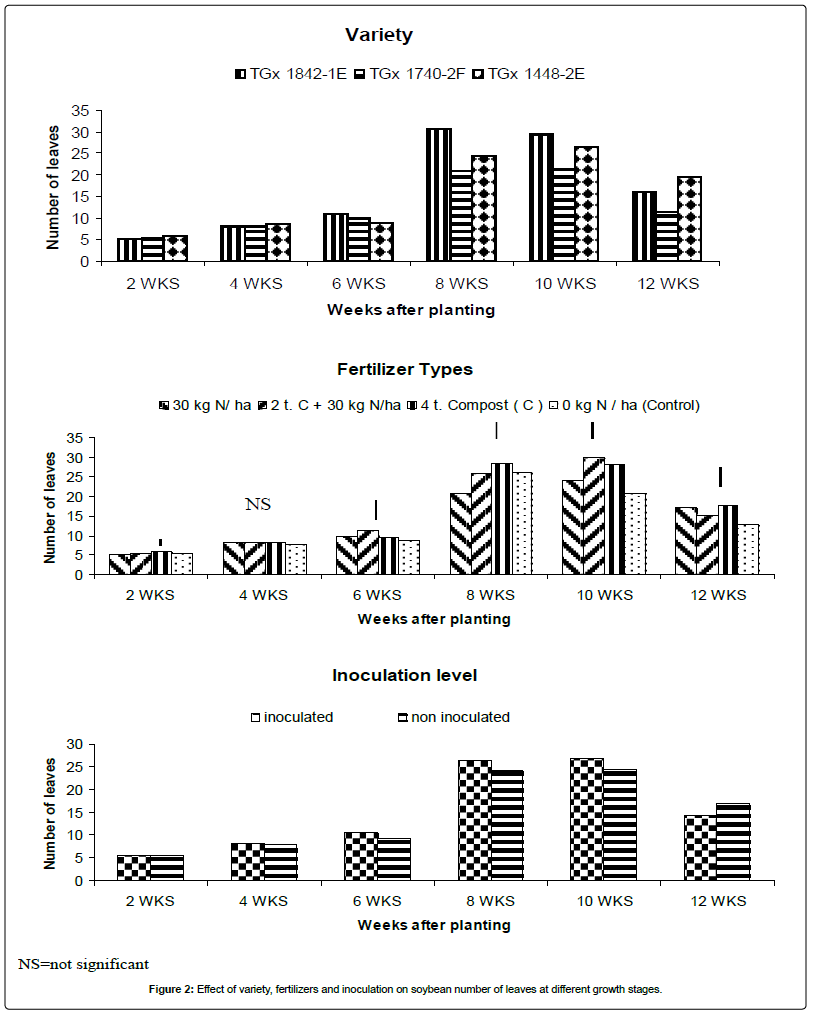 Figure 2: Effect of variety, fertilizers and inoculation on soybean number of leaves at different growth stages. 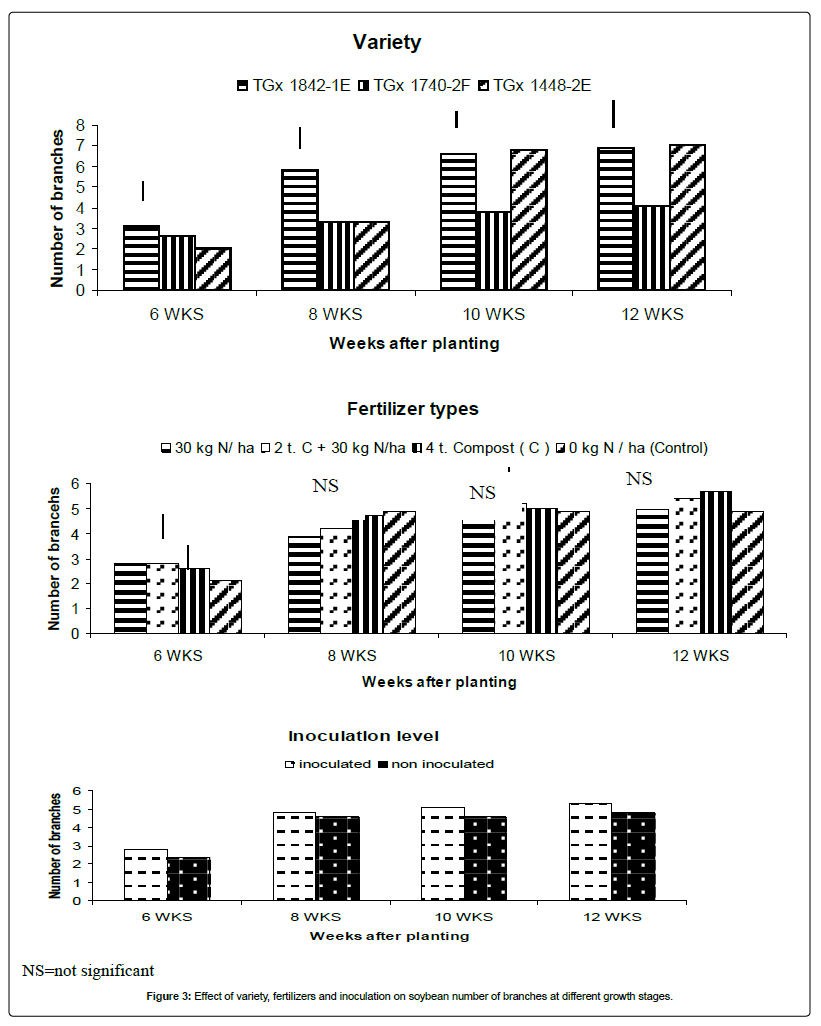 Figure 3: Effect of variety, fertilizers and inoculation on soybean number of branches at different growth stages. 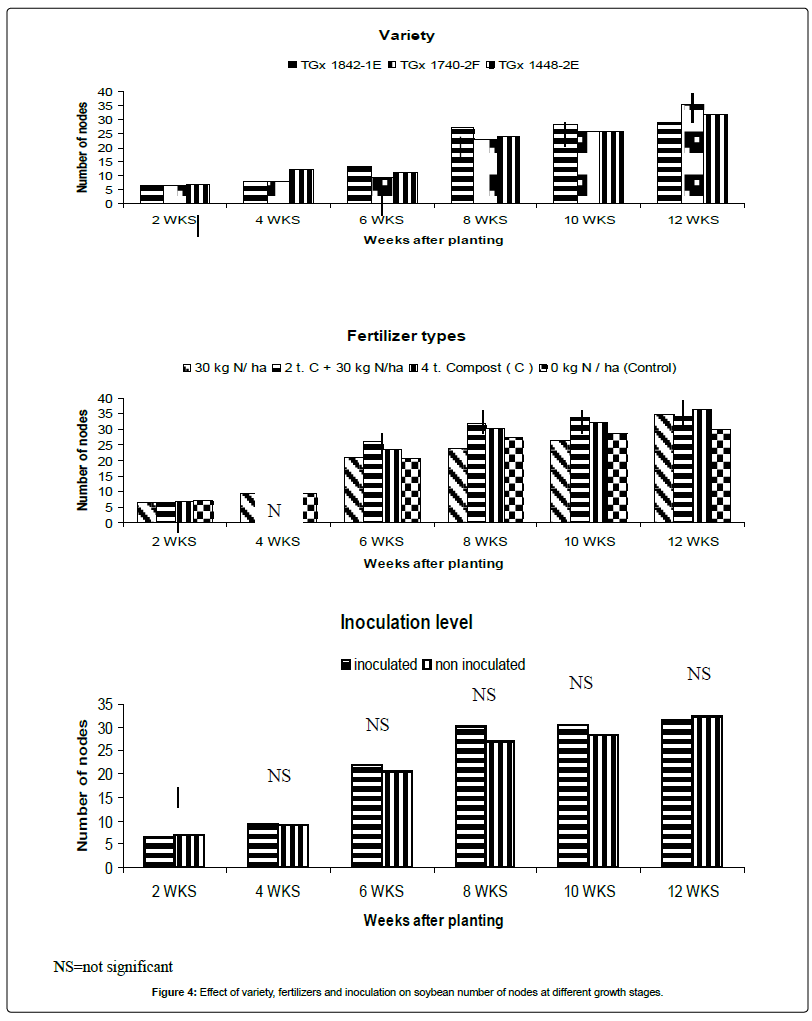 Figure 4: Effect of variety, fertilizers and inoculation on soybean number of nodes at different growth stages.

Varietal effect was significant on stem dry weight, leaf dry weight, root dry weight and pod dry weight during the growth and development through the sampling period. TG × 1448-2E accumulated higher stem dry matter except at 12 WAP when compared with other varieties (Table 1). However at 10 and 12 WAP, TG × 1442-IE had higher stem dry matter accumulation than other two varieties. Leaf dry weight was significantly higher in both varieties TGX 1842-IE and TGX 1448-2E compared with TGX 1740-2F at 8 and 10WAP. However at 12 WAP there were no significant effects among all the varieties studied (Table 2). Dry matter accumulated in the root of soybean was not significantly different among the varieties at 6, 8 and 10WAP except at 12WAP when TGX 1740-2F produced significantly highest values for root dry weight followed by TGX 1448-2E and least with TGX 1842-IE (Table 3).

Table 6: Summary of ANOVA for main and interactive effects of variety,fertilizer types and inoculation on soybean pod and seed characteristics.

The results showed that fertilizer types influence the growth, dry matter production and yield of soybean varieties. While inoculation of soybean seed alone had no significant effect. Application of compost and urea fertilizer enhanced development of vegetative parameters such that number of leaves, node number and number of branches were significantly better in fertilized plants then unfertilized plants i.e., control. This suggested reduced in crop productivity under a condition of limited nutrients, most especially N-availability. This is in line with the observation of Smith et al. [9], Makinde et al. [15] Akanbi et al. [16] and Daramola et al. [17]. They reported that availability of adequate nutrients could improve crop growth and yield parameters. Inoculation effects were not significant in most of the growth parameter measured at all stages of growth. The reason for this may be due to sufficient nitrogen being released from the organic matter or biological antagonism from other microorganisms indigenous to the soil used. These could be answered by future research. Dry matter in the different plants increased significantly with compost rate of 4 t/ha followed by the combine application of 2 t/ha compost+30 kgN/ha urea, although were similar most times with 4 t/ha compost. This corroborate earlier assertion that soybean require between 30 kgN/ha to 60 kgN/ha fertilizer for optimum performance [3,18].

Application of compost at 4 t/ha and combine application of 2 t/ ha compost+30 kgN/ha urea are superior to other treatments with respect to seed yield. This also suggested that the nutrient use efficiency as a result of applied fertilizer by soybean plants, which improved the synthesis and translocation of photosynthesis from the sources to the sink and significantly increased in number and weight of pods and seeds [19].

From this study, combine application of 2 t/ha compost+30 kgN/ ha urea is recommended for the production of soybean in the study area. The treatment was as effective as application of 4 t/ha compost. This reduces the quantity of inorganic fertilizer required whenever the two are needed to be applied together.