Declining soil fertility is one of the major problems causing yield reduction of food barley in West Showa. Therefore, considering this in view field experiment was carried out to determine the combined effects of farm yard manure (FYM) and inorganic NPS on growth, yield and yield components of food barley at Toke Kutaye District. The experiment was laid in randomized complete block design with four replications. Generally, analysis of variance showed significant difference among treatments for most of traits recorded. Markedly, application of 12 t FYM ha-1 combined with NPS (33.4:66.6% NPS:FYM) gave higher number of tillers from 0.25 m-2 was 270 effective tiller and 13 effective tiller plant-1) gave the respective. The higher plant height (90 cm) was obtained from the application 75:25% NPS:FYM. Higher panicle length, panicle weight and total kernel weight of barley were recorded with application 50:50% NPS:FYM. The higher grain and biomass yield (6496 and 15917 kg ha-1) of barley were harvested from 66.6:33.4% NPS:FYM at Dada Galan kebele; in Toke Kutaye District. Application of 66.6:33.4% NPS:FYM gave optimum yield and economic return and recommended for barley production in this area and similar agro-ecologies.

Barley (Hordeum vulgare L.) ranks fourth among cereals in the world and is grown annually on 48 million hectares in a wide range of environments [1]. In Ethiopia, barley is an important food crop in the highland parts and the second largest barley producer in Africa, next to Morocco, accounting for about 25 percent from the total crops [2]. It is at 2005, 100 countries participated in the world and produced 138 mil t from 57 ha mil [3]. It was reached in Ethiopia; it has been grown for 5000 years around Tibet and the Andes on the mountain slopes [4] and it is used for emergency crop while food shortage in September matures early [5]; the Second largest barley producer 90% in Africa [6] and the fifth most important cereals crop in total production [3]. The features of barley production in Ethiopian includes: high tillering capacity; tolerance to marginal soil conditions; insect, disease and frost. It is below, 1.3 t ha-1 and potential yield goes 10 t ha-1 can be obtained under serious management at experimental plots. MOA use of farm yard manure with low rates of mineral fertilizers could be one alternative solution for sustainable soil fertility management and barley production [7]. Shata et al. [8] use of chemical with organic fertilizer at optimum level, reduce the amount of chemical fertilizer. Limited agronomic studies in line to integrated nutrient management practices and recommend best practices in order to maximize yield [9].

Description of the study site 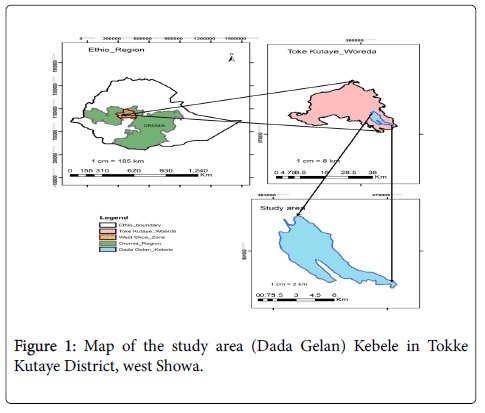 The soil samples of the experimental site were collected two times. The soil sample was collected from each treatment in four replications and composited to eight soil samples for the treatments and was air dried ground using a pestle and a mortar and allowed to pass through a 2 mm sieve and analyzed for the selected physicochemical properties using standard laboratory. Organic carbon content was determined by the volumetric method [12]. Total nitrogen was analyzed by Micro- Kjeldhal digestion method with sulphuric acid [13]. The pH of the soil was determined according to FAO [14]. The cation exchange capacity (CEC) was measured after saturated the soil with 1 N ammonium acetate (NH4OAc). Available phosphorus was determined by the Olsen’s method using spectrophotometer [15]. Particle size distribution was done by hydrometer method (differential settling within a water column) according to FAO [14] using particles less than 2 mm diameter and soil particle size determination by Bouyoucos hydrometer method [16].

The plot size was 3 m × 2 m=6 m2. An improved seed of food barley (EH-1493) was used for planting in July 25, 2016. The field was prepared with conventional methods using oxen plough three times. The spacing of food barley variety was 20 and 2 cm between rows and plants respectively. The seed rate used was 125 kg ha-1.

Leaf area where it was measured in the field linear dimensions of leaves LA=L*W*b and leaf area index (LAI) was measured by the area of leaves (single sided) divided to covering a given area of ground. Plant height was measured (cm) from five plants sampled randomly from the central rows one week before harvesting and the total measured plant height was summed and divided by the number of plants to get the average height of each plant. Number leaves plant-1 on the main shoot (MS) and each of the tillers were counted. Number of tillers plant-1 was counted as total number of tillers and effective tiller plant-1 at the milking stage after 100% flowering completed.

Spike length of barley was measured from the main tiller in centimeter from base to tip and divided by the number of ten plants and the panicle length per plant was obtained. Panicle weight was measured from 10 matured plants with samples. Number of Kernel per panicle was counted from the main tiller plant by taking ten samples of each plant from central net plot and averaged over ten plants.

The thousand-seed weight of barley was counted and expressed in gram. Total above ground biological yield was harvested and weighted from each plot, after sun drying and then biomass per plot was converted into hectare basis (kg ha-1). Grain yield measured from each plot in kg of the eight central rows adjusted to 10% moisture level and converted to kg ha-1, used for the analysis.

Harvest index was the ratio of yield to total plant biomass (aboveground biomass) multiplied by 100 and expressed in percentage.

For economic evaluation, partial budget, values to cost ratio (VCR) and marginal analyses were used based on the local market price of the Barley yield and fertilizer cost [19]. The economic analysis was performed to investigate the economic feasibility of the treatments. The average yield was adjusted downwards 10% to reflect the difference between the experimental plot yield of and the production yield by farmers.

Table 2: Effects of integrated nutrient management on days to 50% emergence, days to 50% flowering and days to 90% maturity and growth components of barley. Means within column followed by the same letter are not significantly different at P=0.05, NS=non-significant.

Days to 90% maturity: Significantly higher (121) days to 90% maturity of barley was obtained under non-fertilized as compared to sole or integrated nutrient management (Table 2). In contrary of this with control this might be attributed to the behavior of the fertilizer N which increases it delays maturity time was reported by Damene [25]. Likewise, Woinshet [26] reported that N delays maturity. In opposite of Damene was finding, Days to maturity decreased with increasing rate of P fertilizer. The application of integrated nutrient significantly (P<0.05) affected the number of days to 90% maturity of barley. The higher amount of chemical fertilizer applied, the lower days to maturity. Similarly, Gurmessa [27] found the number of days required to reach physiological maturity by the plants was also decreased with increasing rates of applied P, particularly for those plants without N. The application of NP fertilizer increased crop growth during the early growth period, hastened maturity and increased the number of mature heads at harvest time [28]. Likewise, Ofosu and Leitch [29], however, the application of fertilizers of any source, nevertheless of their doses speeded days to maturity as compared to no fertilizer application.

Table 3: Effects of integrated nutrient management on yield and yield components of barley. Means within column followed by the same letter are not significantly different at P=0.05, NS=non-significant.

Similarly, result was reported by Kumar et al. The same to this result the yield increase was to the extent of 33.4 percent over local and the increased yield of genotype DWRB-73 was mainly due to significant increase in spike length (9.4 cm) compared to BH-902 [46]. Therefore, application inorganic and organic fertilizer alone or integrated were produced taller spike length of barley.

Number of kernel plant-1: The mean number of kernel plant-1 was significantly (P<0.05) affected by application of 100% NPS and FYM and (50:50% NPS: FYM), 64 result the applied treatment indicated integrated nutrient management. Applications of sole and integrated nutrient management were produced higher number of kernel plant-1 as compared to non-fertilized. Likewise, application of 5 t ha-1 FYM combined with 75% inorganic NP gave the highest number (37 and 36.7) of grain number spike-1 [43]. Similarly, Arif et al. [47] have reported significant increases in the number of grain spike-1 by applying organic manures and inorganic fertilizer application alone. Sepat et al. reported significantly enhanced early vegetative growth, more number of spikes which consequently increased the number of spike of barley. Likewise, Kato and Yamagishi reported spikes density variety were higher in organically managed field than as well as increases in spike per plant could be the consequence of the increase in number of tillers per plant. Godara et al. [48] reported neither inorganic fertilizers nor organic sources alone can result in sustainable productivity. Therefore, a combination of both inorganic and organic fertilizers, where the inorganic fertilizer provides readily available nutrients and the organic fertilizer mainly increases soil organic matter and improves soil structure and buffering capacity of the soil.

Copyright: © 2018 Dinka TB, et al. This is an open-access article distributed under the terms of the Creative Commons Attribution License, which permits unrestricted use, distribution, and reproduction in any medium, provided the original author and source are credited.