On the global scale, Bangladesh ranks 21st in tobacco growing, the largest producer being china, followed by the USA and India. Tobacco farming took place since mid-sixties of the last century in this country and contributes less than 0.01% to the Gross Domestic Product (GDP) of Bangladesh. It spreads widely after liberation of 1971 at Teesta silt in Rangpur area. After Rangur, tobacco production become concentrated in Kushtia district rapidly in the fertile land of Gangetic flood plain, in the recent years the movement was to the southern part of Bangladesh, particularly to the Chittagong Hill Tracts, probably for the river Matamuhurie’s fertile land and availability of trees in the hill forest for tobacco leaf curing purpose. The prime reason behind Tobacco Company’s movement is probably when they face decline in soil fertility and shortage of fuel wood for curing tobacco leaves. Particularly, in the two tobacco dominant districts-Rangpur and Kushtia, Kushtia registered a tremendous increase in production; the other reason behind these occurrences has been the active operation of a number of tobacco companies in Kushtia, including the largest in the country, namely, British American Tobacco Bangladesh (BATB), followed by Dhaka Tobacco and Nasir Tobacco Company etc. However tobacco cultivation has a lot of impact on the environment such as deforestation, environmental pollution due to use of agrochemicals and soil fertility depletion [1]. The crop is a heavy feeder on soil nutrients and as a result depletes soil nutrient very fast compared to many crops, thereby making such soils unsuitable for healthy plant growth [1]. It depletes soil nutrient very fast that subsequent food crops do not benefit from the residual fertilizer applications [2] and tobacco plant requires substantial doses of chemical fertilizers such as TSP, Urea and Potassium sulfate. In addition, the use of agrochemicals such as insecticides and herbicides in tobacco plot is another factor that contributes a lot in the accumulation of heavy metals in soil. However tobacco cultivation is still extended within Kushtia district along with adjoining districts. The rate of increase is about 41%. In the year 2013-14, the total tobacco cultivation area was 124000 acre and yield was 94000 MT in Bangladesh whereas, at Kushtia, the area was 45075 acre and yield was 6461 MT and In the year 2014-15, the area was 127000 acre and yield was 94000 MT in Bangladesh, whereas, at Kushtia, the area was 39000 acre and yield was 32526 MT. [3]. On the basis of the intensity and spread of tobacco farming in Bangladesh, the study was conducted at Bheramara upazilla in Kushtia district where 10 tobacco plots with 10 adjoining non-tobacco plots were selected at random. However, keeping all this in view, the present study aimed at determining the effect of tobacco cultivation on soil fertility for two consecutive years and to compare the fertility status of tobacco based cropping pattern growing plot with adjoining non-tobacco based cropping pattern growing plot.

Soil samples were collected from each farming field twice per year (before and after of tobacco/rabi crop cultivation) at 0-15 cm depth (up to plough pan depth) from 9 spots and were mixed thoroughly to make a composite sample from both tobacco and non-tobacco based cropping pattern plots separately. Then the soils were thoroughly mixed and air dried and sieved to pass through a 2 mm sieve and about 0.5 kg composite samples were packed in clean polythene bags, properly labeled and taken to the laboratory for chemical analyses. Then soil samples were analyzed for determination of soil PH by glass electrode PH meter method using soil water suspension of 1:25 [5], organic carbon in soil determined by wet oxidation method [6], total nitrogen of soil estimated by Kjeldahl method [7], available soil phosphorus measured by Olsen method [8], exchangeable potassium determined by using flame photometer [9] and available sulfur determined by turbidimetric method [10]. The generated soil data were analyzed by using programming R.

Results of nutrient wise soil fertility status of the study plots are shown in Figures 1 to 6. 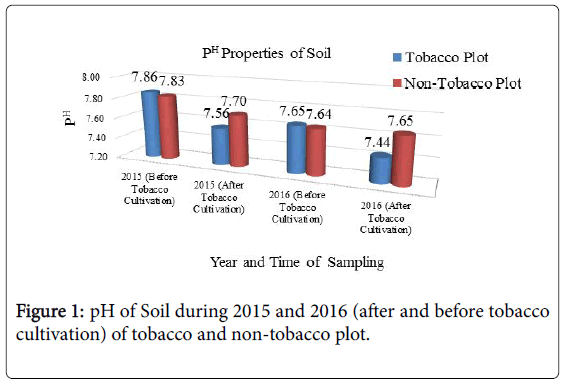 Figure 1: pH of Soil during 2015 and 2016 (after and before tobacco cultivation) of tobacco and non-tobacco plot. 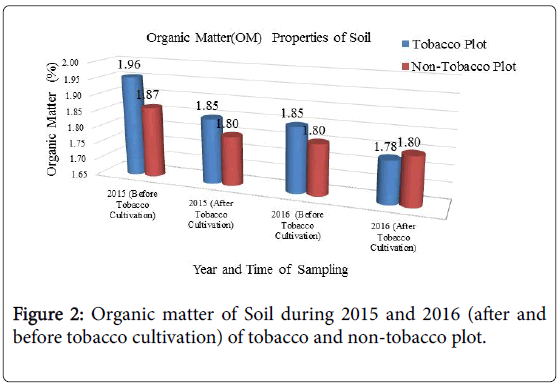 Figure 2: Organic matter of Soil during 2015 and 2016 (after and before tobacco cultivation) of tobacco and non-tobacco plot. 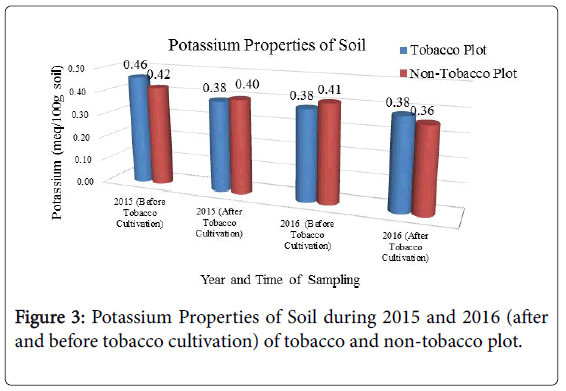 Figure 3: Potassium Properties of Soil during 2015 and 2016 (after and before tobacco cultivation) of tobacco and non-tobacco plot. 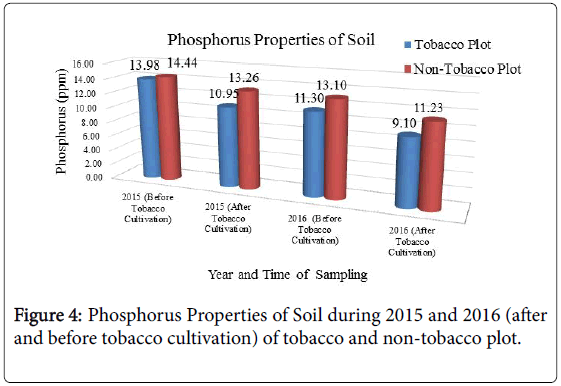 Figure 4: Phosphorus Properties of Soil during 2015 and 2016 (after and before tobacco cultivation) of tobacco and non-tobacco plot.

Available Sulfur: In case of tobacco plots, in the first year the initial average sulfur value was 16.22 ppm at before cultivation and after tobacco cultivation it was 12.31 ppm, And after tobacco cultivation of the end of 2nd year it was 10.89 ppm so, the available S value decreases from 16.22 ppm (2015) to 10.89 ppm (2016) that was 32.86% less from the initial value (Figure 5) and the difference is very much significant. In case of nontobacco plots the initial S value was 14.01 ppm and at the end of 2nd year it was 12.42 ppm after cultivation that is about to similar (Figure 5). 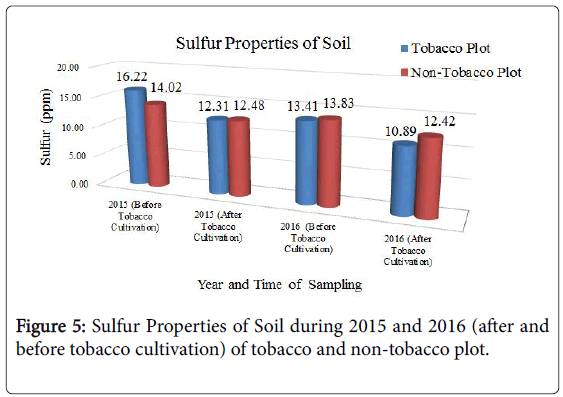 Figure 5: Sulfur Properties of Soil during 2015 and 2016 (after and before tobacco cultivation) of tobacco and non-tobacco plot. 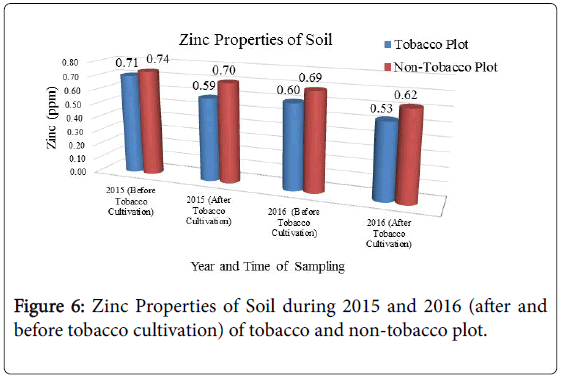 Figure 6: Zinc Properties of Soil during 2015 and 2016 (after and before tobacco cultivation) of tobacco and non-tobacco plot.

However, Tobacco is a hungry plant which depletes soil nutrient rapidly than many food crops. Tobacco requires a huge amount of fertilizer and chemical inputs that affected soil badly, besides this, tobacco takes extra nutrients from soil which also negatively effect on soil fertility. Farming of tobacco in a same land frequently reduces its fertility and when the farmers land is no more fertile enough, tobacco companies pick up and moves on to another place leaving the farmers with no resources for work or survives. However low soil nutrient levels similar to the current study have been reported in Tanzania [1,2], since tobacco plants are known to absorb more N, P and K than any other crops ,its high nutrient requirements makes subsequent food crops not to benefit from its residual fertilizer use [2]. Research has revealed that soil degradation is severe in Tanzanian tobacco cultivated areas compared to other crops [13].

Tobacco farming is increasing gradually with last 15 years in the study area and results from almost all tobacco plots showed that farming of tobacco in a same land frequently reduces its fertility; therefore the farmers do not get productivity neither from tobacco nor from other food crops latter. Therefore, tobacco cultivation leads to soil fertility depletion. Now the experiment need to be repeated to trace heavy metal contamination such as Pb, Cr, Ni, Cu, Cd etc. at tobacco cultivated plots to ascertain its impact on soil quality and environment. However, Agriculture Extension Department as well as Government should provide easy accessibility of seeds, fertilizers and other inputs to the farmers of the study area to ensure alternatives as profitable as tobacco farming from food producing crops so that farmers will leave tobacco cultivation.

Copyright: © 2018 Moula MS, et al. This is an open-access article distributed under the terms of the Creative Commons Attribution License, which permits unrestricted use, distribution, and reproduction in any medium, provided the original author and source are credited.