Copyright: © 2015 Barakat MA. This is an open-access article distributed under the terms of the Creative Commons Attribution License, which permits unrestricted use, distribution, and reproduction in any medium, provided the original author and source are credited.

This article describes the role of N-doping with TiO2 nanoparticles in enhancing visible light photo catalysis. Anion doping with nitrogen ions plays an important role in enhancing effectiveness of TiO2 by introducing trapping sites. Thus, doped nanostructured TiO2-xNx films have been synthesized, characterized, and investigated as visible light photo catalysts for the degradation of pollutants in water. The synthesized nanoparticles can be investigated by suitable technique such as Raman and/or IR spectra in order to make evidence of the fixed amount of nitrogen. Photo degradation of chloro-phenols, as a model for hazardous pollutants, has been studied.

In light of the increasing contamination of the environment by hazardous chemicals, there is great interest to develop innovative technologies for the safe destruction of toxic pollutants. The processes must be cost-effective, easy to operate, and capable of achieving total or near total mineralization. This has prompted researchers to investigate innovative chemical oxidation technologies. Photocatalytic oxidative destruction of pollutants in wastewater provides the ultimate solution for the treatment of hazardous wastes. Photocatalysis would be a promising simple technique which can be used for both the degradation of organic pollutants and the removal of metals in onepot systems. The process requires ultra violet (UV) light which can be artificial or natural sources.

Among the most promising compounds for photo catalysis applications is titanium dioxide. TiO2, as efficient and stable catalyst, is one of the least expensive semiconductors. However, the major impediment to its wide spread application, particularly indoor, resides in the fact that TiO2 absorbs near-UV light (Eg=3.2 eV for anatase). This band gap does not match very well with solar spectrum. Therefore, a visible-light activated catalyst is desired that can take advantage of a larger fraction of the solar spectrum and would be much more effective in environmental cleanup. Nanostructured (~20- 30 nm) particles provide the optimal balance between volumetric and surface recombination and are thus best suited for photocatalysis. The photoelectronic properties of TiO2 can be strongly influenced by the dopants that introduce new electronic energy levels inside the band gap. Substitutional doping of nitrogen in TiO2 has revealed an improvement in visible light photocatalytic activity.

In the recent years, N-doped TiO2 nanoparticles were prepared by different sol-gel methods. The first adopted method was that one reported by Sato [1]. The obtained yellow powder was characterized in terms of particle size distribution, specific surface area by BET, band gap energy, and UV-VIS absorbance spectrum. Some of the relevant data, together with those relevant to P25- TiO2, are here after reported (Table 1).

Table 1: Relevant measurements of both N-dopped TiO2 and undopped P-25.

Figure 1 shows the wavelength range reflectance of the produced doped titania and pure TiO2 supplied by Degussa, for comparison. A significant light absorbance in the visible wavelength was achieved by doped titania. 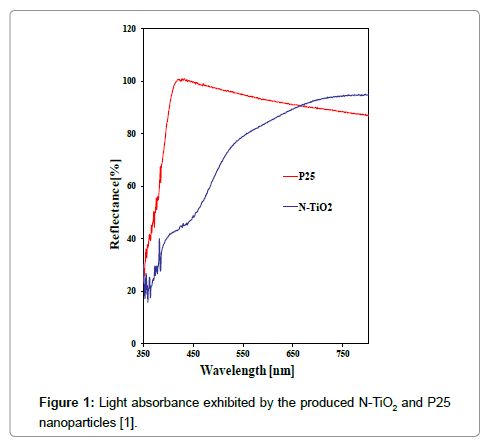 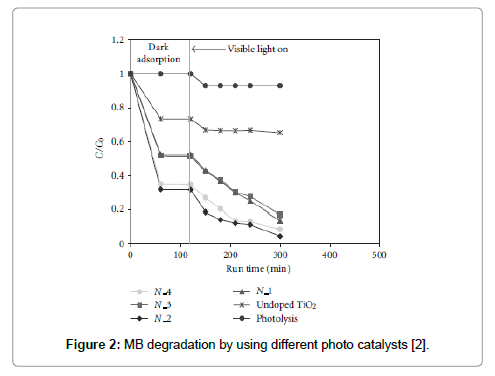 The drawback of this TiO2 N-doping procedure is the necessity to operate during the nanoparticles production at a very low temperature, near to 0°C, in order to fix the nitrogen. To overcome such a difficulty a second more suitable operating procedure, applied by Tushar [3], has been adopted by using diethyl ammine solution as nitrogen source. Such a method was performed at ambiance temperature and allowed the production of very effective photocatalysts under visible light irradiation.

Many studies [4-9] have verified that N-doping in oxide semiconductors could improve their photocatalytic activity because a portion of O atoms are replaced by N atoms to form a new donor energy level on top of the VB, which generates a red shift due to E(O2 p) = −14.8 eV and E(N2 p) = −13.4 eV. For the composite materials, an investigation of the presence of N in the photocatalysts is important because N is present in the urea, which is used as a fuel. In the combustion process, a significant amount of heat was released, which caused a high reaction temperature. The N derived from the gaseous products, such as N2 and NO, was doped into the photocatalysts to replace O.

N-doped-TiO2 nanoparticles can greatly enhance visible light photocatalysis of pollutants in wastewater. This can be due the tendency of N to form intermediate energy levels within the TiO2 matrix narrowing the band gap and enables the semiconductor to harness more photons of solar radiation.