Copyright: © 2017 Neeraj G. This is an open-access article distributed under the terms of the Creative Commons Attribution License, which permits unrestricted use, distribution, and reproduction in any medium, provided the original author and source are credited.

Nicotine is hazardous to human body and adversely affects almost all systems of the body. Side stream smoke also called second hand smoke is as hazardous as for primary smokers. An increased risk of development of chronic obstructive lung disease and lung cancers has been reported in many studies. Smoke free work places seem to be the only option to reduce such hazards. This strategy must go on simultaneously along with established smoking cessation programs. An insight into the factors leading to nicotine addiction must also be taken care of.

Nicotine dependence is a craving which leads to the compulsive use of nicotine containing products, physiologic tolerance (needs to use increase amounts of nicotine to achieve desired effects), nicotine withdrawal upon discontinuation (symptoms being craving, irritability, anger, anxiety, depression, increased appetite) and continued use despite a lot of problems [1]. Nicotine the substance responsible for addiction is disastrous, causing harm to almost every organ of the body. Nicotine use causes an increase in the dopamine, glutamate, gamma-aminobutyric acid release and these give feeling of pleasure and calmness. Withdrawal symptoms occur due to decrease of dopamine in period of abstinence and corticotropin releasing factor may play a key role in withdrawal [2].

Almost all smokers begin smoking in very adolescence under influence of numerous social factors which include mimicking of family members and friends in circle, promotion through advertising and public images, as a status symbol in society, and some get the feel of macho man via smoking. Easy accessibility and low cost of raw tobacco products also contribute to overuse of nicotine and its products.

Stressful life, workplace stress, and nature of work also influence smoking behavior of an individual. John et al. [3] studied a community sample of Northern German area and observed that higher work strain was associated with stronger relation with Fagerstrom Test for Nicotine Dependence (FTND). Migration in search of job from rural areas also influences the smoking behavior. Cui et al. [4] categorically demonstrated that ruralurban migrant workers manifested a high prevalence of stress in both life and work. Both forms of stress showed association with current smoking and life stress was found to outweigh the impact of work stress.

Various scaling methods are available to measure nicotine addiction. Fagerström Test for Nicotine Dependence (FTND) helps the physician to measure the degree of addiction by use of a 6 item questionnaire. Out of six questions, two have multiple choice items which are scored from 0 to 3 and four questions have yes/no items that are scored from 0 to 1. Finally all the items are summed to yield a total score of 0-10. Score of 1-2 means low dependence, 3-4 score indicates low to moderate dependence, 5-7 score suggests moderate dependence and score of 8 and above means high dependence [5]. The cessation methods can be subsequently planned according to the degree of dependence.

Another method available is a 10-item questionnaire called The Tobacco Dependence Screener (TDS) which helps to measure the level of dependence which use tobacco by smoking and is not useful for people using smokeless tobacco [6].

The Wisconsin Inventory of Smoking Dependence Motives (WISDM-68) scaling method helps the physician to know the motive behind the nicotine abuse by measuring 68 items which consist of 13 domains [7].

The Cigarette Dependence Scale has two types i.e. CDS-12 and the CDS-5 in which smokers are interacted by email and a website and then assessed for the signs of dependence by rating them with the use of a 5 point scale [8].

Nicotine is available in various forms such as cigarette, cigar, pipe tobacco, snuff, and chewing tobacco which are highly addictive and the mechanism leading to dependence are comparable to those that determine addiction to drugs like heroin and cocaine [10].

Nicotine is hazardous to human body and adversely affect almost all systems of the body. Its regular abuse may cause diabetes mellitus and neoplasm by altering glucose metabolism, cell proliferation, angiogenesis and apoptotic pathways of body. It can also cause gastro esophageal reflux disorder (GERD), peptic ulcer disease (PUD) and multi drug resistant Helicobacter pylori infection. Nicotine use can cause non-small-cell lung cancer, emphysema, increases the tracheal tension and various respiratory disorders. Nicotine effect on CNS can cause headache, anxiety, depression and attention deficit hyperactivity disorder. It can cause myocardial ischemia leading to Angina, Myocardial infarction and many other fatal cardiovascular disorders. By increasing urinary excretion of albumin and decreasing GFR, nicotine abuse can lead to renal artery stenosis and increased mortality in patients with end-stage renal disease. Smoking tobacco may also cause erectile dysfunction [11].

Environmental tobacco exposure may be at work places or may be in the indoor environment. Passive smoking is defined as the involuntary inhalation of tobacco smoke present in the air. The side stream smoke also called as second hand smoke, is also harmful. An increased risk of chronic obstructive pulmonary diseases seen in these individuals has been demonstrated in many studies, which might also be a dose dependent phenomenon [12].

ETS also referred to as second hand smoke (SHS) is a major threat to public health. It is a mixture of 2 forms of smoke that come from burning of tobacco. Main stream smoke is the smoke exhaled by smoker. Side stream smoke is the Smoke from lighted end of a cigarette, pipe or cigar hookah. These types of smoke have high concentration of cancer causing agents and are more twice than mainstream smoke. It is increasingly being recognized as an occupational hazard to workers in hospitality industries also. Global studies have clearly shown that hospitality venues have the highest levels of indoor air pollution.

Second hand smoke causes lung cancer and cancer of other major organs of the body in adults & children. Second hand smoke has been classified by various National and International organization as a known cause of cancer and other adverse health effects specialty cardiovascular diseases [13].

In children it may be responsible for recurrent upper & lower respiratory tract disease (Figure 1). 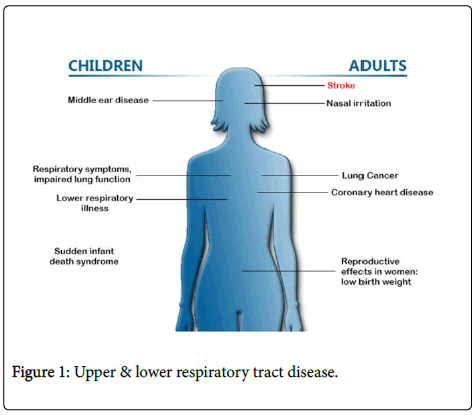 Passive smoking can be assessed either by measuring tobacco smoke polluted found directly in the air or by using biomarkers assay, an indirect measure.

Among the direct measurement of Air pollutants, Nicotine and 3- Ethenylpyridine levels are more specific. Among the four specific biological markers of tobacco smoke (Nicotine, Cotinine, Thiocyanates, and Protein or DNA adducts), only urinary cotinine assay can be retained as most reliable marker and reflects tobacco exposure over the preceding 48 h.

The measurement of nicotine and cotinine levels in the appendage of skin (hair and nails) reflects exposure over part 3 months [12].

A study from New Zealand after introduction of Smoke Free Environments Amendment Act (SEAA) confirmed that second hand smoke exposure decreased significantly from around 20% in 2003 to 8% in 2006 at public workplaces [16].

A smoking Ban at workplaces may result in:

• Significant reduction of pollutant in the air and clearly reduces the internal body burden for users and employees.

There are several components which may be implemented in our smoking de addiction programme. In the school and colleges, peer pressure, electronic media, failure in exams, depression etc. is major causes leading the students to indulge in smoking habits. The students should be counseled properly on routine basis about the harmful effects and measures to get rid of the drives leading them to get involved in these activities. Posters and Banners indicating harmful effects of smoking and drug abuse should be displayed in canteen, cafeteria, and the places used for smoking. Health care teams should inform about smoking cessation methods. In the offices all members should be informed about ill effects of smoking. There should be documented use of nicotine and tobacco in the health records. Working area should be declared as smoke free zone and heavy penalty should be applied on offenders. Office based prevention programs and policies targeting on high risk individuals should be implemented. Counseling session focusing on preventive strategies, de-addiction should be made compulsory for all members.

At national level there is unmet need for the formulation of policies and laws to make all public and workplaces smoke free. Tobacco excise taxes should be increased and only tobacco free shops should be allowed around school, colleges and working places. National tobacco control program has to be implicated in each and every district. Tobacco cessation services should be made available to all patients regardless of health insurance. Aggressive research should be done to assess safety, quality and efficacy of e-cigarettes as a cessation device. Health budgets and funds should focus on research work to develop more efficient methods to make future generation smoke free.