Copyright: © 2017 Arfat M, et al. This is an open-access article distributed under the terms of the Creative Commons Attribution License, which permits unrestricted use, distribution, and reproduction in any medium, provided the original author and source are credited.

Methods: The Present study was conducted with 61 patients, age between 2 year to 70 year mean age (36 Years) presenting to emergency department of Uttar Pradesh University of Medical Sciences, Saifai, Etawah, with a history of acute head trauma from Dec 2015 to May 2016. All patients were examined using 64 MDCT.

Trauma is the leading cause of death among individuals between 1 to 40 years of age. In trauma patients, head injury is found in majority of patients [1]. Traumatic Brain Injury (TBI) is a major health problem now days in world wide. Traumatic Brain Injury (TBI) affects the daily lives of affected populations, their families and relatives [2]. Major portions of Trauma related death occur due to TBI. The primary causes of TBI vary according to age of the patient [3]. Falls are the leading cause of Traumatic Brain Injury in children up to 4 years of age and in others people older than 75 years of age. Among young populations, the annual incidence of head trauma is estimated to be 200 in a population of 100000. TBI is very brief event that occurs in less than 200 ms, and often in less than 20 ms.

Traumatic Brain Injury needed a multidisciplinary approach of management. In the Emergency department, CT scan is very well characterized imaging modality of choice in the evaluation of TBI, because it is fast, simple, non-invasive radiological procedure that gives images with excellent spatial resolution. With the help of CT Scan we could easily diagnose the TBI lesions such as skull fractures, Epi-Dural Hematoma (EDH), Sub-Dural Hematoma (SDH), Sub-Archnoid Hematoma (SAH), Intra-Cerebral Hematoma (ICH), multiple contusions whether hemorrhagic and non hemorrhagic [4].

The present study was done on 61 patients of acute head trauma and positive findings on head MDCT scanning between Dec 2015 and May 2016.

1. Patients of all ages, sexes and occupations were included.

2. Only those patients with positive findings on brain MDCT scanning were included.

4. General examination of the patients was done by the emergency department of UPUMS hospital, Saifai, Etawah.

The diagnosis of TBI was performed using a 64 row Multi-detector computed tomography scanner, Siemens somatom sensation. Axial section images (1.25-5 mm slice thickness and image interval of 5 mm), with a high standard frequency reconstruction algorithm. CT head data sets were performed in the supine position. For adequate Multi planar reconstruction, scanning was performed to cover the area from orbito-meatal line (Radiographic base line) to the vertex of head. Then makes the thin slice of whole data acquired and load to MMWP work station, where MPR images were obtained in axial, coronal and saggital planes whenever need. 3D technique including Shaded Surface Display (SSD), Volume Rendering Technique (VRT) was used to obtain three dimensional images according to the findings from the original image.

In the present study, total 61 Traumatic Brain Injury patients were diagnosed in which 43 males and 18 female patients, with male and female ratio of 2.4:1. Their age ranges from 02 year to 70 year, with a mean age of 36 years. The peak age was the third decades including 20 patients with average of 32.77% from the total no. of patients (Table 1 and Figure 1). 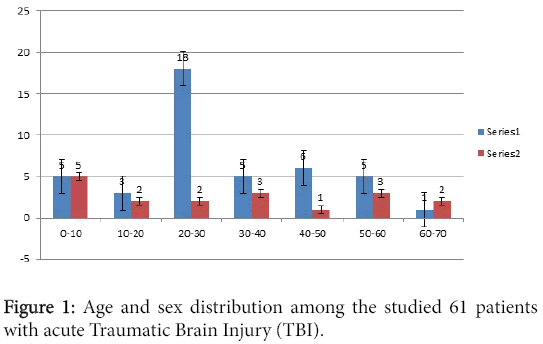 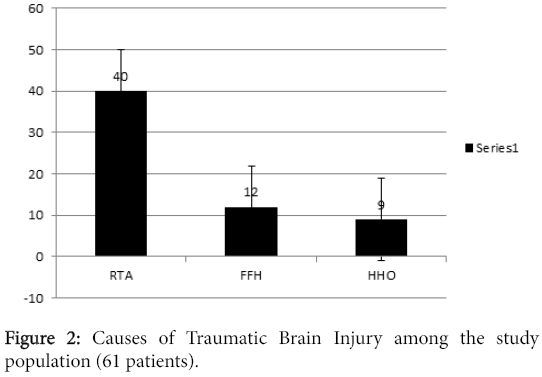 The total no. of patients presented with different clinical presentation. 60.65% of TBI patients were complained Loss of consciousness, 6.56% Vomiting/headache, 21.31% facial injury and 1.47% suffered scalp injury (Table 3).

Traumatic Brain Injury patents are frequently diagnosis by using MDCT scanning. MDCT scanning of imaging technique is well used to assessment of the seriousness of injury and its image can be obtained by using multi-detector high-resolution scanners. The images could be observed using soft tissue and bone windows whereas data can be obtained into 3D CT sets to indicated bony and intracranial injuries [6].

Evaluation of neurological injury of TBI patents was done by using Axial CT scanning but it is limited in evaluation of the posterior fossa, the middle cranial fossa, and the inferior frontal lobes. Coronal and saggital CT reconstruction provides more information of these areas [7]. In previous various study of acute traumatic brain, injuries are conducted on behalf of direct relation between the severities of clinical manifestation and relation with their abnormalities [8]. Whereas present study has seen intracranial sequelae on MDCT scanning. In the present study, different types of injury were discussed as follow.

MDCT imaging was used for detecting fractures and depending on their location; type prompt surgical intervention can be done to prevent CSF leakage, infection, haemorrhage in which 37.7% of acute traumatic brain patient were suffered by open skull fractures and their pathological manifestation like depressed, crashes and abnormal thickened in skull (Figure 3). The present study is well supported to Ashikaga et al. reported use of MRI in skull fracture of TBI patients [9]. Extra dural hematoma was observed under MDCT imaging. It showed as biconvex hyper dense elliptical collection with sharp edge. In present study, it was found that 9.83% extra dural hematoma of acute traumatic brain patient. It was developed between the skull and dura associated skull fracture (75-90%). It may be due to injured middle meningeal artery (Figure 4). Mittl et al. has been well demonstrated extra dural hematoma in mild head injury and normal head CT findings [10]. Sub dural hematoma was found 14.75% case of present study of TBI patients. It was evaluated by using subdural CT window. It was showed as hyperdense and concave in shape on CT scan (Figure 5). Singh and Suryapratap also reported in an unusual case of a compound depressed skull fracture [11]. Subarchnoid hemorrhage was found 13.11% of acute traumatic brain injury patients. CT was showed more accurate in detecting acute sub arachnoid hematoma than routine MRI sequences. It may be due to the blood in acute sub arachnoid hematoma has a low deoxyhemoglobin and was appeared black (Figure 6). The present finding also supported to Bradley and Holme et al., studies about MR Appearance of hemorrhage in the brain [12,13]. In the present studies, it is revealed that 27.86% TBI patients suffered by brain contusions and 6.55% intra cerebral hematoma (Figure 7). The finding was confirmed due to scattered areas of bleeding seen at cortico-medullary junction or cortex of brain parenchyma and appeared as salt & pepper appearance. It could be hemorrhagic and non-hemorrhagic. It was due to blunt head injury patients and in acceleration and deceleration trauma. Colorado et al. also reported in Traumatic Brain Injury, 1990-1993 [14]. It was observed that the clot signal was similar to the brain parenchyma in MRI in acute stage of head trauma. It was observed that MDCT was more sensitive in detecting clots within 24 hrs of injury than MRI. The present study of MDCT was well documented by Gutman et al. [15]. Intra cerebral hematoma was observed on CT. It was well defined hyper dense area. ICH cause ruptured of blood vessels in Traumatic Brain Injury (TBI) patients. In previous studies of both ICH and contusions simultaneously present in same case [16]. It is concluded that MDCT is well characterized to various types’ severity of the brain injury of TBI patients. The present study data is indicated majority of patients (65.57%) suffered with TBI by Road traffic accidents involving young adult males constituted the predominant cause of injury brain CT around Etawah district of Uttar Pradesh.

On the basis of present study finding, it was indicated that 65.57% Majority of patients suffered with TBI by Road traffic accidents around of the Etawah district. The epidemiological trends of Etawah district about of Traumatic Brain Injury (TBI) may be due to poorly followed road traffic role. There is an urgent need for improvement in the condition of roads and enforcement of the use of protective devices by road users to curb the epidemic of head injury resulting from RTAs.

Authors declare no conflicts of interest.