Shigella sonnei (S. sonnei) is a non-motile, rod shape, clinically significant, Gram-negative bacterium. It is commonly associated with dysentery (shigellosis). Recently, resistance to third and fourth generation cephalosporins and fluoroquinolones has been reported in S. sonnei. In the present study, we assessed the effect of biofield treatment on phenotyping and genotyping characteristic of S. sonnei (ATCC 9290). The lyophilized samples of S. sonnei were divided in three groups (G): G-I (control, revived), G-II (treatment, revived), and G-III (treatment, lyophilized). All these groups (control and biofield treated) were analyzed against antimicrobial susceptibility, biochemical reactions, and biotype number. The 16S rDNA sequencing was carried out to establish the phylogenetic relationship of S. sonnei with different bacterial species. The treated cells of S. sonnei exhibited an alteration of 3.33%, 10%, and 23.33% of total 30 tested antimicrobials in susceptibility assay for G-II on day 5 and 10 and G-III on day 10, respectively as compared to control. The treated cells of S. sonnei showed a significant change of about 12.12%, 12.12%, and 57.58% biochemical reactions out of 33 tests in treated groups of G-II on day 5 and 10 and G-III on day 10, respectively. The biotype number was also changed in treated samples of S. sonnei. Based on nucleotide homology sequences and phylogenetic analysis, the nearest homolog species of S. sonnei (GenBank Accession Number: EU009190) was identified as Shigella flexneri (EF643608). These results revealed that biofield treatment can prevent the absolute resistance in microbe against the existing antimicrobials.

Development of antimicrobial resistance in several microbes like bacteria, viruses, fungi, or in parasites has been reported globally in the recent few decades. Frequent and improper use of antimicrobial further accelerated the incidence of microbial resistance [1]. Shigella sonnei (S. sonnei) is a rod shape, non-motile, facultative anaerobic Gram-negative and lactose-fermenting bacterium. S. sonnei is associated with gastrointestinal tract (GIT) infection disease shigellosis in both developed and developing countries, where the sanitation is insufficient [2,3]. S. sonnei is usually transmitted by fecal-oral route, direct interpersonal contact, contaminated food, water, or uncooked food. Shigella infection is the third most common gastroenteritis after Salmonella and Campylobacter infection in the USA. Recently, S. sonnei has become the most prevalent species in the developed world. It is estimated to cause 80–165 million cases of disease and 600,000 deaths annually, worldwide [4]. The S. sonnei has been acquired resistant to commonly used antimicrobials like streptomycin, tetracycline, sulfonamide, trimethoprim, and ampicillin. Emergence of extendedspectrum β-lactamases (ESBLs) in S. sonnei was also detected in Korea [2,5]. Therefore the multidrug therapy required to treat the infection cause by resistant strain of microbes. However, multiple drug therapy shows serious toxicity and associated adverse effects like neurotoxicity and nephrotoxicity [6]. Due to associated side effects and failure of drug therapy, an alternate treatment approach is required. Recently, an alternate treatment known as biofield energy is reported that inhibits the growth of bacterial cultures [7]. Biofield is an electromagnetic field that permeates and surrounds living organisms and referred as biologically produced electromagnetic and subtle energy field that provides regulatory and communication functions within the human organism [8]. Various internal physiological processes such as blood flow, brain and heart function etc. generates biofield. Researchers have attempted different biologic studies and effects of biofield on various biomolecules such as proteins, antibiotics [9], conformational change in DNA [10] etc. Thus, human has the ability to harness the energy from environment or universe and can transmit into any living or nonliving object(s) around the Globe. The objects always receive the energy and responding into useful way that is called biofield energy and the process is known as biofield treatment [11]. Mr. Mahendra Trivedi’s biofield treatment (The Trivedi Effect®) has renowned to alter the various physicochemical characteristics of metals and ceramics [11-17]. Quality and quantity of several agriculture products have been improved by several folds in the biofield treated plants [18-20] and growth and adaptation of the plant were also enhanced with the help of biofield treatment [21,22]. In addition, the biofield treatment has considerably altered the phenotype and biotype of the microbe and subsequently, the susceptibility to antimicrobials was also changed [23-25].

Based on the knowledge of existing literatures and considering the clinical significance of S. sonnei, we evaluated to see the impact of biofield treatment on antimicrobial susceptibility, biochemical reactions pattern, biotype number, and 16S rDNA gene sequencing of the microbe.

The lyophilized strain of S. sonnei were divided into three groups (G) like G-I (control), G-II (treatment, revived), and G-III (treatment, lyophilized). G-I consider as control. No treatment was given. The treatment groups (II and III) were in sealed pack and handed over to Mr. Trivedi for biofield treatment under laboratory condition. Mr. Trivedi provided the treatment through his energy transmission process to the treated groups without touching the samples. Subsequently, group G-I and G-II were assessed on day 5 and 10; and G-III was assessed on day 10. After that, all groups were evaluated for an antimicrobial susceptibility, biochemical reactions pattern, and biotype number [25]. The 16S rDNA gene sequencing of S. sonnei was also carried out.

The antimicrobial sensitivity data were reported in Table 1 and 2. The result showed that the biofield treated S. sonnei exhibited a significant alteration in susceptibility assay of about 3.33% (G-II on day 5), 10% (G-II on day 10), and 23.33% (G-III on day 10) of total tested antimicrobials. The antimicrobials ampicillin, aztreonam, cefotaxime, ceftazidime, chloramphenicol, and tetracycline were converted from R → S; simultaneously more than 2 folds decreases in MIC values in lyophilized treated group G-III; cefotaxime showed a decrease in susceptibility from R → I in G-II on day 10. Besides, amoxicillin/K-clavulanate and ampicillin/sulbactam were converted from S → R in G-II and cefepime converted from I → S in G-III on day 10.

G, stands for group; MIC data is presented in μg/mL

Table 4: Effect of biofield treatment on Shigella sonnei to alteration in biotype.

The 16S rDNA sequence was determined in S. sonnei and shown in Figure 1. The alignment and comparison of the gene sequences were performed with the sequences stored in Gene Bank data base available from NCBI using the algorithm BLASTn program. As evidenced from nucleotides homology and phylogenetic analysis the sample 6A (S. sonnei) was identified as the same species (S. sonnei) with 99% identity of gene sequencing data. Ten bacterial species and S. sonnei were considered as Operational Taxonomic Units (OTUs) to facilitate the investigation of phylogenetic relationship of S. sonnei among other related species. Total 1500 base nucleotide of 16S rDNA gene sequences were compared by multiple alignments with the help of ClustalW in MEGA3.1 [30], and the data are shown in Table 5. As evidenced from Table 6, the lowest value of genetic distance from S. sonnei was 0.002 base substitutions per site. The nearest homolog genus-species of S. sonnei (Genbank accession number: EU009190) was determined by analyzing the 16S rDNA sequencing and phylogenetic tree, and found to be Shigella flexneri (Genbank accession number: EF643608). The distance matrix was prepared based on nucleotide sequence homology data and presented in Table 6. All pairwise distance analysis was carried out employing the p-distance method in MEGA3.1 software. 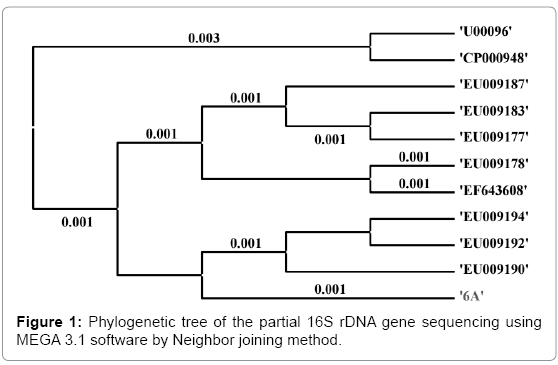 Antimicrobial resistance is a major global threat to public health, reported by World Health Organization (WHO). WHO also reported a post-antibiotic era, where people will die from simple microbial infections that have been curable for decades. Microbes naturally mutate and ultimately become immune to antimicrobials. Unfortunately, due to misuse of antimicrobials like over-prescribing by doctors or improper uses by patients is causing it to happen in much faster than expected. Similarly, S. sonnei has been acquired resistant to commonly used antimicrobials like tetracycline, streptomycin, trimethoprim, sulfonamide, and ampicillin. Further, emergence of extended-spectrum β-lactamases (ESBLs) was also detected in S. sonnei in some Asian countries like Korea [2,3,31].

Due to increasing the number of clinical specimens, costeffectiveness, and convenient interfaces with hospital information systems and laboratory the uses of automated or semi-automated systems for the susceptibility testing and identification of microbes has been increased recently [32]. Therefore, we also utilized the MicroScan Walk-Away® system for analysis of antimicrobial sensitivity, biochemical reactions, and biotyping. The overall result of antimicrobial susceptibility of biofield treated S. sonnei suggested that biofield treatment has significantly alerted the sensitivity of microbes in both side (either S → R or R → S) as compared to control. The biochemical reactions of treated cells of S. sonnei were altered in the range of 12.11 to 57.58% in treated group as compared to control, which could be due to some alteration happened in metabolic enzyme systems and/or genetic system. It was also found that there was an alteration of biotype number in treated groups of S. sonnei. Based on the BLASTn analysis, the sample 6A was identified as S. sonnei. The closest homologues species of S. sonnei was identified as Shigella flexneri. The present study revealed that biofield treatment can alter the sensitivity of antimicrobials against S. sonnei. It seems that biofield treatment can play a potential role to circumvent the severe microbial infection in the fast and cost effective way as compared to modern medication.