Copyright: © 2016 Khalid MM, et al. This is an open-access article distributed under the terms of the Creative Commons Attribution License, which permits unrestricted use, distribution, and reproduction in any medium, provided the original author and source are credited.

An autoclave stainless steel reactor, was used to process the experiments, its volume (1 liter). The inner diameter was 11.5, the thickness of the shell wall was 10 mm, and the height was 30 cm. This autoclave was provided by a 3-phase motor with Nmax equal to 1300 rpm, which able to agitate mixer that consists of stainless steel shaft and three turbine propeller blades impeller, the diameter of the impeller was 3 cm. The agitation speed was regulated by the digital regulator (50 digits) in the board, each degree in the board equals to almost 22 rpm. Six heaters were tied uniformly around the shell of the reactor (100 kW for each) and isolated by asbestos cloth layer the temperature of the reactor was controlled by controller. Pt 100 stainless steel thermocouple was put on the inside wall of the shell and connected to the regulating system on the board. Two solenoid valves (1/4 inch) were used to charge air to the reactor and discharge vent gases from it, which put on the upper side of the reactor wall. Manual stainless steel valve was planted on the bottom of the reactor to discharge the mixture of the product after leaching process was finished. Gage valve (10 bars) was connected to the wall of the shell to read the inside reactor pressure. All of the control options were put on the control board outside of laboratory hood. Figure 1 shows the details of the apparatus [18]. 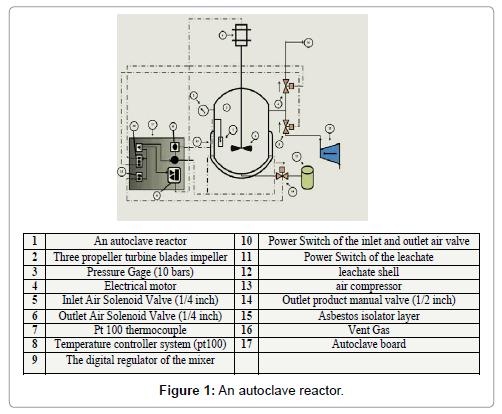 The spent NiMo/Al2O3 catalysts used in this study were supplied by Midland oil Company refinery of Al-Dora which used these catalysts as a hydrogenation catalyst. The weight percent of nickel in spent catalyst was 2.18%. Solid sample of roasted spent catalyst particles were analyzed for nickel content by mean of Atomic Absorption Spectrometry at the analytical laboratory of Ibn Sina Company. This value was used in the calculation of nickel recovery for each experiment as shown next section. The spent catalyst was roasted at 500°C about 5 h to minimize the amount of oil and sulfur present on the catalyst; then the samples were ground and sieved to various particle sizes (69- 550) μm. The nitric acid was diluted to 40% solution and the solid to liquid ratio was 1/50 (10 gm of spent catalyst in 0.5 liters of nitric acid solution) this ratio remains constant at all experiments. The autoclave reactor was switched on, and the temperature was adjusted to (40- 80°C). The agitated regulator was set at the desired mixing speed (400- 800 min-1). The HNO3 solution was added to 10 gm of spent catalyst and inserted into the reactor. The air was compressed to the reactor to reach the desired pressure (1-3 bar). After the time you want (1-4 h) was reached the solenoid valve of discharging vent gas was switched on until 2 bar pressure was reached and then open the manual product valve then the solution was filtered to separate the unreacted nickel and impurities. Samples of solution from all experiments were analyzed for nickel using Atomic Absorption Spectrometry.

The dissolution of nickel oxide from the spent catalyst follows the following reaction [16,17].

The effect of temperature on nickel recovery is shown in Figure 2 under the conditions of atmospheric pressure, average particle size of 200 μm and agitation speed of 600 min-1. The dissolution rate was low at lower temperature and increase with an increase in leaching temperature. At 40°C, 76.9% of nickel extraction was obtained in 4 hours while the percent increased to 86% by increasing the temperature to 80°C in the first hour. After, Ni extraction increase slowly to reach 94.3% in 4 hours. This increasing may be imputed to many reasons; firstly, is rising the temperature of leaching will increase the rate of reaction between the value mineral and the solvent (spent catalyst and nitric acid) according to Arrhenius equation Eq.(2) that relate the temperature and the reaction rate takes place at this temperature. 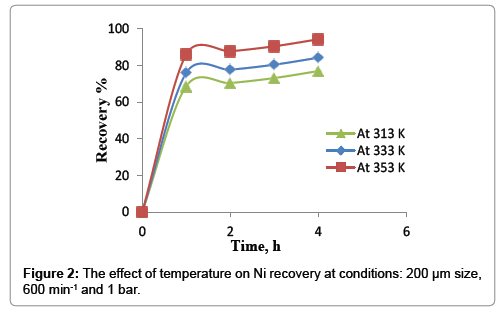 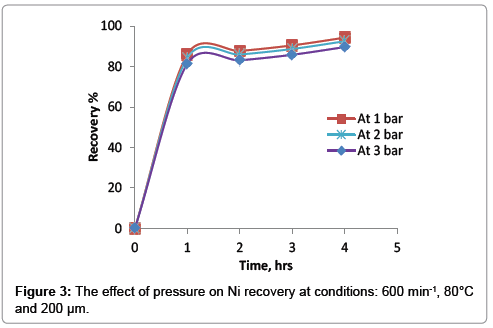 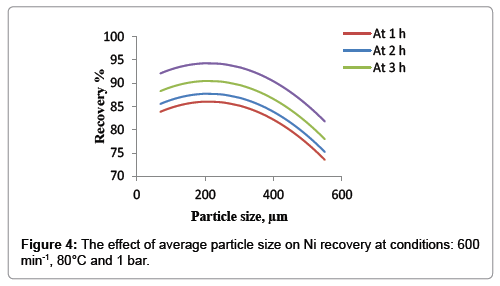 Figure 5 shows the effect of agitation speed at the conditions of temperature 80°C, average particle size 200 μm and atmospheric pressure. It was concluded that the figure could be divided into two regions. The first one begins from the lowest agitation speed to the 600 min-1. It was observed slightly increasing of nickel recovery with agitation speed from 400 min-1 to 600 min-1 which only 7% of recovery was achieved. The second region was detected after 600 min-1, in this region the agitation speed did not significantly influence the leaching rate. This indicates that the external diffusion of HNO3 between the surface of particles and the fluid is fast, and hence does not control the dissolution of nickel within the investigated range of agitation speed this agree with Ramos and Mousa et al. study [18]. 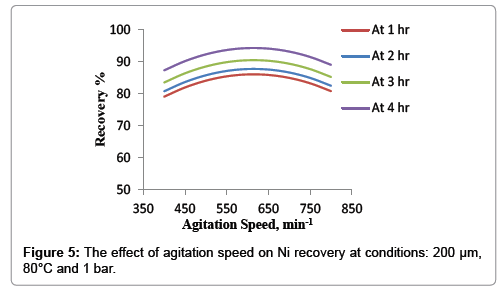 From the results of this investigation the following conclusions can be drawn:

• The optimum leaching conditions were obtained as temperature 80°C, pressure 1 bar, average particle size 200 μm and agitation speed 600 min-1 after 4 h which give the percentage recovery about 94%.