Exploring the Pharmacological Activities of Hydrazone Derivatives: A Review

Hydrazone and its derivatives with azomethine -NHN=CH- group represents an important class of compounds with broad spectrum of pharmacological activities [1]. A variety of hydrazone derivatives have been synthesized with the potential pharmacological activities like anti-inflammatory, antibacterial, analgesic, antifungal, anti-hypertensive, antiplatelet, anticancer, antimalarial, antidepressant, anticonvulsant and antiviral etc [2]. In addition to their extended biological properties they also combine with other functional groups to provide pharmacologically active molecules. The main theme of this study is to explore the biological and pharmacological importance of hydarzone derivatives for future development of new drug entities. The increasing mortality rate in systemic fungal infection is attributed due to the high antifungal drug resistance. Such scenario creates the urge for developing safe and effective antifungal drugs for clinical use. A series of hydrazones were synthesized from the coupling of aldehydes with tert-butyl carbazate by Casanova et al. [20]. The resulting hydrazones were subjected to antifungal screening and promising activity was observed for most of the compounds (Figure 3a). Altintop et al. synthesized novel hydrazone derivatives through the addition-elimination reaction of 2-[(1-methyl-1H-tetrazol-5-yl)thio)] acetohydrazide and aromatic aldehydes/ketones [21]. Compounds were subsequently investigated and were observed to have significant antifungal potential (Figure 3b). A series of 2‑thiazolylhydrazones were developed by Chimenti et al. that exhibit potent antifungal activity against various Candida species (Figure 3c) [22]. Ozkay et al. synthesized benzimidazole based hydarzone derivatives and were subjected to antifungal and antibacterial studies and significant antifungal and antibacterial activity was observed [23]. Interestingly, one of the compound showed more activity then the standard antifungal ketaconazole (Figure 3d). Paola Vicini et al. reported the synthesis of a number of hydrazones of 1,2-benzisothiazole hydrazides [24]. The series of compound was tested against bacteria and yeast and were reported as good antibacterial agent as well as most of the hydrazone derivatives were active against yeast (Figure 3e). This year S. Kauthale et al. synthesized a set of thiazolyl hydrazones through one pot synthesis [25]. The resulting compounds were observed to possess moderate to good antifungal activity (Figure 3f). Cancer is a burning issue under investigation which refers to the uncontrolled and rapid abnormal cell division that can invade nearby tissue. In 2015 about 90.5 million people were cancer carrying and even its number is increasing every year. A number of hydarzone derivatives have been developed with anticancer properties. R. M. Mohareb et al. reported the synthesis of a number of hydrazide-hydrazone derivatives from ring D modification of pregnenolone [26]. These compounds were evaluated for anticancer activity and were reported highly effective against breast cancer, lung cancer and CNS cancer compared to the reference drug doxorubicin (Figure 4a). Similarly, Küçükgüzel et al. synthesized a series of hydrazide-hydrazone derivatives using Flurbiprofen as template [27]. The compounds were shown to have significant activity against leukemia cancer cell line and ovarian cancer cell lines (Figure 4b). Nasr et.al developed cumarine based hydrazide-hydrazone derivatives and bromocoumarins (Figure 4c) were reported to have good antitumor activity against pancreatic carcinoma and hepatic carcinoma [28]. Savini et al. synthesized a series of new 3- and 5-methylthiophene-2-carboxaldehyde a-(N)-heterocyclic hydrazones and were investigated for anticancer activity [29]. Compound N-(4,8-dimethyl-quinolin-2-yl)-N’-(5-methylthiophen- 2-ylmethylene)-hydrazine was found to be the most active antitumor agent (Figure 4d). Recently Sun et al. reported a set of phenylalanyl hydrazones that were evaluated for anticancer activity [30]. Novel hydrazons were found effective against gastric cancer (Figure 4e). Very recently a set of azole bearing hydrazone derivatives were reported by Labib et al. and were subjected to testing for anticancer activity [31]. The synthesized hydrazones were found effective against breast cancer and hepatic cancer cell lines (Figure 4f). 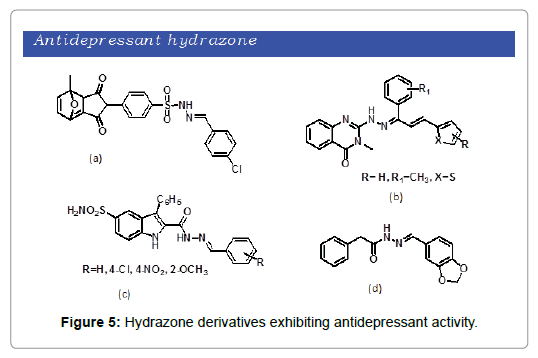 According to the WHO, hypertension also known as elevated blood pressure, is a condition in which the blood vessels have a persistent high pressure. In majority of the cases the cause is nonspecific/unknown. Long term hypertension is considered one of the major risk factor for cardiovascular diseases. To overcome this rapidly increasing health problem, a number of researchers have paid attention to developed verity of hydrazone derivatives for the management of hypertension. Leal et al. reported the synthesis of safrole based N-acylhydrazones [42]. The compounds were evaluated and found to have antihypertensive characteristic (Figure 7a). As vasodilatation is one of the factors that reduces elevated blood pressure, Silva designed and synthesized new acylhydrazone derivatives and subjected to vasodilator screening [43] The new compounds showed vasodilator effect by directly acting on smooth muscle endothelium (Figure 7b). Diana et al. synthesis a series of 1-substituted 3,4-dihydroisoquinolines [44]. The resulted compounds were tested and were declared that 1-hydrazino homologue and the corresponding acetaldehyde and acetone hydrazones show significant antihypertensive activity (Figures 7c1 and 7c2). Bakale demonstrated the synthesis of ligand zn(II) complex of 2-chlorobenzaldehyde, hydralazine and hydrazine [45] The complex was evaluated for antihypertensive activity and was found to exhibit promising activity through in situ generating 1,2,4-triazole moiety (Figure 7d). Copyright: © 2017 Hussain I, et al. This is an open-access article distributed under the terms of the Creative Commons Attribution License, which permits unrestricted use, distribution, and reproduction in any medium, provided the original author and source are credited.