Copyright: © 2015 Arab Y. This is an open-access article distributed under the terms of the Creative Commons Attribution License, which permits unrestricted use, distribution, and reproduction in any medium, provided the original author and source are credited.

This research aims to study the sunlight penetration performance on the front façade of selected apartments with Neo-Minimalist architectural style. The selected case studies are two front façade of apartments buildings located at the Penang Island east coast latitude 5° 25' 0" N and longitude 100° 19' 0" E, the east part of Penang has been under great developing progress in the last 10 years. Minimalist architectural style is very popular and preferable by architects and people in this region. The tow selected case studies are Baystart condominium, Bayan Lepas and Bayswater Resort condominium, Gelugor. The study uses sun tool software to simulate and calculate the extent of sunlight penetration. The simulation will be conducted with oriented the building as the sun rays are perpendicular to the building’s façade, and then compare the results of sunlight penetrations between the two buildings and the used of architectural elements. The study finds that the sunshade elements and the recessed wall with balcony which are used in the minimalist style facade design make the buildings efficient to prevent the unwanted sunlight which causes overheating and over brightness inside the building, and that is the one of the reasons behind the popularity of the minimalist architectural style.

This research is to study the penetration of the sunlight on the Neo- Minimalist architectural style house façade. The Neo-minimalist style is selected because of the popularity of this architectural style during the last ten years in Malaysia [1]. The research is trying to highlight and point to the problems caused by the direct sunlight penetration to the indoor living areas in the highrise appartments buildings and the effects od the solar radiatations on the building’s façade in the tropical region. This study will be able to guide the architect and designers to have better ideas and better using of sunshading elements on façade designs.

Designing without the consideration of the sustainability importance in addition to the Design faults are the main reasons of the poor façade design which is unable to provide enough shading area and blocking the solar radiations. Thus the reason behind this research is to generate empirical findings and contributions which lead the architectural design.

All the results and measurements in this study will be calculated using computer simulation software. The study is limited to the Neo- Minimalist architectural style apartment located in Penang which considered to be one of the most important cities in Malaysia. It epitomizes the present and future direction of housing industry in Malaysia. Using the least element number to get the maximum effect is considering the definition of the Neo-Minimalist architecture style. The main peruse of this study is to measure the shading elements efficiency in this architectural style apartment. The solar radiation is one of house façade exposing to the direct sunlight problems, the sun energy will cause overheating for the indoor spaces [2,3]. It generates extra heat gains inside the house which causes warm temperature to the indoor area; as a result, it creates uncomfortable thermal condition to the occupants. A report by Centre for Environment, Technology and Development, Malaysia (CETDEM) (2005) the consumption of electricity as stated Malaysian Urban Household Energy Consumption Patterns is about 32.4% on air-conditioning and fan for cooling of the total electric bill, which indicate problem in indoor heat gains due to unnecessary direct sunlight exposure to the houses in Malaysia. A study on high rise apartment is crucial as apartments are the most popular house types which represent 73% of the total unit houses [2].

Having a guideline for an excellent facade design is one of the important considerations in a tropical region like Malaysia, good passive facade design is to avoid intensity of solar radiation is necessary and transfer the direct sunlight into heating inside the living area [4,5]. It generates extra heat gains inside the house which causes warm temperature to the indoor area. As a result, this creates uncomfortable thermal condition to the occupants [3].

As mentioned earlier the study is limited to Two Neo-minimalist residential apartment building in the south coast of Penang Island, Malaysia to be the case studies of this research, both of the case studies are considered to be high cost apartments with different locations in the city of Penang. The first selected case study is BayStar eleven stories condominium which is sited nearby Queensbay mall on the sea side facing Jerejak Island in Bayan Lepas (Figure 1). Whereas the second case study is 26 stories residential building placed in Gelugor opposite of Tesco mall in Penang Island (Figure 2).

The extent sunlight penetration results will be calculated using SunTool computer simulation software, the goal of this study is to get the extent of sunlight penetration and façade shading area when the buildings expose to the maximum level of direct sunlight in the day time, the simulation will be done when the sunlight rays are perpendicular to the building’s façades (the east façade during the morning hours and the west façade in the afternoon and evening hours), then the survey will be able to discuss the efficiency of facade’s shading design [6]. The study will be limited to the changing of the sun path to get the perpendicular of the sunlight to the east (90°) and west (270°) (Table 1 and Figure 3) in order to get the results at the maximum exposure level, and also the other limitation is that there are at certain times and dates that the sun path’s azimuth is not possible to have perfectly at 90° [7,8]. In these cases, the closest azimuths nearest to 90° will be used when the simulation is made from 8:00 am to 6:00 pm, which are listed in Table 1.

Table 1: Time, date and azimuth of the sun when the sunlight extent penetration of façade was calculated for cases in Malaysia [5].

All locations, times, dates and orientations data will be keyed n the sun tool software in order to get the correct building positions and orientation to do the sunlight penetration simulations and calculate the percentage of the façade shading area (Figure 4), and then the facade’s dimensions such as depth of exterior shading device, height, wall’s width and sill height will be keyed in the sun tool software. The software will be able to do the simulations after drawing the façade section and enter all required data. 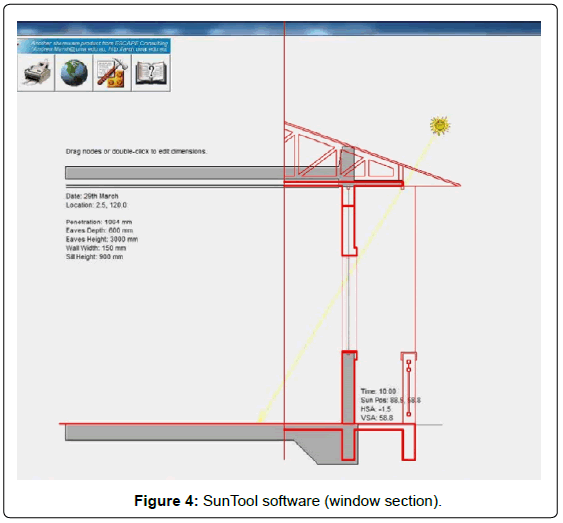 To measure the extent of sunlight penetration inside the room the sun tool software will be using the as illustrated in Figure 5. However, a parallel line to sun beam of the upper window wall must be drawn if the overhang shading device is longer than the upper window wall (Figure 6). The drown line represents the real extent of the sunlight penetration. This condition commonly occurs in the early morning and late evening due to low sun angle in the sky. The calculation will be as follow: 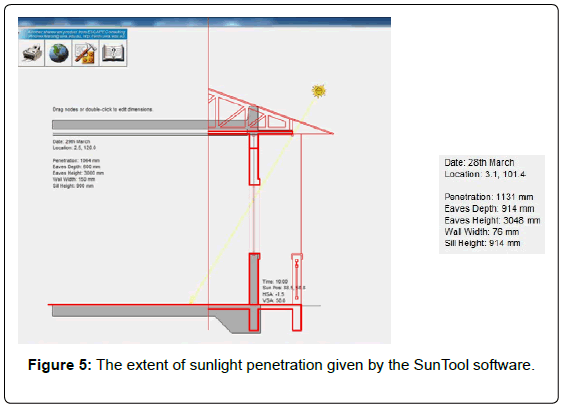 Figure 5: The extent of sunlight penetration given by the SunTool software. 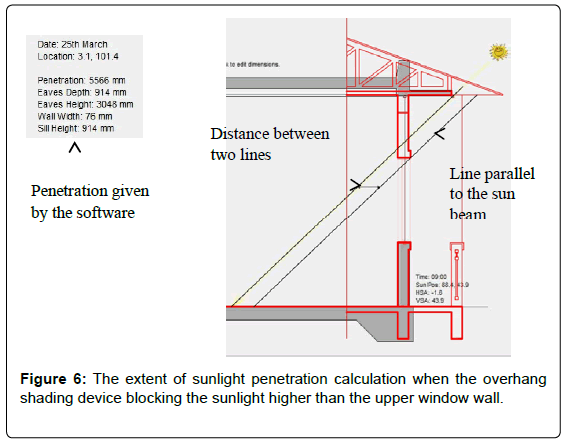 Figure 6: The extent of sunlight penetration calculation when the overhang shading device blocking the sunlight higher than the upper window wall.

Penetration=Extent of the Sunlight Penetration calculated by the Sun Tool software (mm)-Distance between two lines (mm).

This study analysis compares the extent of sunlight penetrations performance of two neo-minimalist apartment’s facade located in Penang, Malaysia, The comparison will be between section XX from the first case study and YY from the second case study, both sections are for living room doors. Table 2 and Figure 7 show the results of the extent of the sunlight penetration of sections XX and YY.

Table 2: The extent of sunlight penetration of case studies 1 and 2. 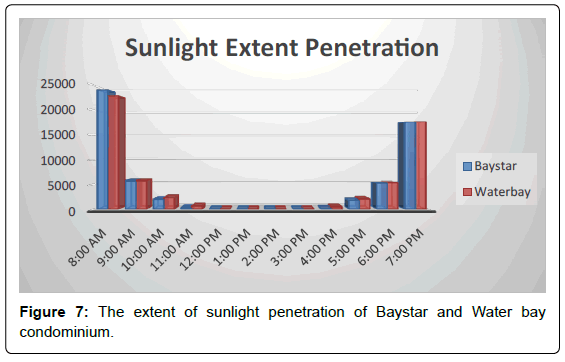 Figure 7: The extent of sunlight penetration of Baystar and Water bay condominium.

• The simulations show that both case studies have similar shading behavior during all hours of simulations.

• The sunlight penetrations extent to the maximum level with more than 20000 mm at the first hour in the early morning.

• Both of the case studies façade have an excellent shading performance from 11:00 am until 4:00 pm.

• The high extent of sunlight penetrations in the early morning and late evening hours is due to the small sunlight angle.

• The results shows that Neo-Minimalist design’s façade have no sunlight extent penetration from 12:00 to 3:00 pm in both case studies.

• The results show that Baystar condominium façade has better shading performance at all simulation hours except for the first hour of the day.

The study finds that the early morning and late evening hours show the maximum level of sunlight extent penetration in both of Baystart and Waterbay building’s façades because of the very small angle of the sun rays and the sun position in the sky at these hours, the results show that both case studies have similar sunlight extent behavior in most of the simulation hours. However the simulations find that the Neo- Minimalist architectural style has a very good shading performance during most of the day time. The recessed wall with balcony and other shading elements are very effective in the Neo-Minimalist style to prevent the extent of sunlight penetration from getting inside the house deeply except for the first and last hour of simulation because of the angle of sun position.

The authors would like to express appreciation for the financial support under Research University Grant by Universiti Sains Malaysia.