1.1. Background: Intraoral resection of early tongue cancer minimally affects the quality of life (QOL) of patients; however, local recurrence of the tumor requires radical resection and negatively affects QOL as well as patient prognosis. The present study was performed to clarify factors affecting recurrence of tongue cancers undergoing intraoral resection.
1.2. Methods: In total, 174 patients (T1: 105 patients and T2: 69 patients) with squamous cell carcinoma of the tongue receiving intraoral resection were enrolled in the study, including 106 male patients and 68 female patients (aged 27-88 years, mean 58 years). Tumor recurrence was observed in 10 of 105 patients with T1 stage cancer (9.5%) and in 6 of 69 patients with T2 stage cancer (8.7%). The clinicopathological factors, including immunohistochemistry for p53, Ki67, and vimentin, were analyzed.
1.3. Results: An infiltration pattern and vimentin expression were associated with tongue cancer recurrence. Specifically, tumors with positive vimentin expression exhibited a higher ratio of endophytic growth, and multivariate analysis revealed that the Ki67 labeling index and vimentin expression were independent factors affecting tumor recurrence.
1.4. Conclusion: The mode of tumor invasion and the epithelial-to-mesenchymal transition, as evidenced by vimentin immunohistochemistry, assisted the identification of high-risk patients with tongue cancer undergoing intraoral resection. Intense follow-up with the aid of multimodal therapies after surgery is necessary in this group of high-risk patients.

Oral cancer represents 2.1% of the total cancer incidence, and more than 200,000 new cases are estimated to occur annually worldwide [1]. More than 80% of oral cancers are histologically squamous cell carcinomas, among which tongue cancer is most predominant. Several prognostic factors have been proposed for tongue cancer, including tumor depth and lymph node metastasis, which are the main factors affecting prognosis [2,3]. Furthermore, the Tumor-Node-Metastasis (TNM) classification has been widely employed for the staging of tongue cancer [4]. Intraoral resection performed in patients with early (pT1 and T2) tongue cancer minimally affects the swallowing ability and cosmetics of the patient and is thus superior to radical resection with respect to patient quality of life (QOL). Nevertheless, local recurrence of the tumor requires radical resection and negatively impacts patient QOL and prognosis. Postoperative chemo- and/or radiotherapy may prevent tumor recurrence. However, the negative effects of adjuvant therapy on tongue function and the body suggest that adjuvant therapy is a poor choice when applied indiscriminately to all patients with early tongue cancer. Therefore, the identification of patients at high risk for tumor recurrence is necessary to establish appropriate treatment modalities for patients with early tongue cancer.

During tumor development, the communication between tumor cells and the surrounding microenvironment is important. In particular, epithelial tumor cells (carcinomas) often change their morphology to undergo local invasion and metastatic dissemination, which is termed the epithelial-to-mesenchymal transition (EMT) [5,6]. Lines of evidence have revealed the correlation between EMT and cancer invasion [7-9]. With the developmental of cancer EMT, the cell intermediate filament status changes from a keratin-rich network connected to adherens junctions and hemidesmosomes to a vimentinrich network connected to focal adhesions [9]. In the present study, clinicopathological factors were analyzed to clarify factors affecting the recurrence of tongue cancers subjected to intraoral resection. Additionally, to study the EMT status of cancer cells, vimentin expression was examined using immunohistochemistry.

This study comprised 174 patients (T1: 105 patients and T2: 69 patients) with squamous cell carcinoma of the tongue who underwent intraoral resection between January 1990 and January 2008 at the Osaka Medical Center for Cancer and Cardiovascular Diseases. The study included 106 male patients and 68 female patients (aged 27–88 years, mean 58 years). The observation period ranged from 4 months to 24 years (median 6 years and 1 month). Tumor recurrence was observed in 10 of 105 patients with T1 stage cancer (9.5%) and 6 of 69 patients with T2 stage cancer (8.7%). Resected specimens were cut into slices at a thickness of 5 mm, fixed in 10% formalin and routinely processed for paraffin embedding. Histological sections cut at 4 μm were stained with hematoxylin and eosin (H and E) and subjected to immunoperoxidase procedures (avidin-biotin complex (ABC) method). Tumor stages were defined based on the pTNM classification [4]. The following characteristics were compared between patients with and without tumor recurrence: age, sex, macroscopic tumor growth pattern, histologic classification, tumor size, depth of tumor, lymphatic invasion, venous invasion, and mode of tumor invasion.

Macroscopic growth patterns were classified as follows with the use of visual examination and palpation: superficial type, lesions with no protrusion from the surrounding mucous membrane or with some ulceration and white spots in the event of protrusion but no palpable induration; exophytic type, growth defined as a main lesion that protrudes externally; and endophytic type, growth defined as a deep induration in the main lesion (Figure 1). The mode of tumor invasion was defined as follows: infiltration (INF)-alpha invasion, lesions with extensible growth that were clearly distinguishable from the surrounding tissue; INF-gamma invasion, lesions with invasion and proliferation that was indistinct from the surrounding tissue; and INF-beta, lesions in which the state of invasion and proliferation were intermediate between INF-alpha- and INF-gamma-positive regions (Figure 2). If the tumor contained various patterns of infiltration at the edge, the most infiltrative pattern was chosen. To further clarify influential factors affecting local recurrence of tongue cancer, immunohistochemistry using antibodies against p53, Ki67, and vimentin (all from Dako, Glostrup, Denmark) was performed using samples from 15 patients who experienced local tumor recurrence and 14 patients without local recurrence. All the procedures of the present study were approved by the internal revenue service of Osaka Medical Center for Cancer and Cardiovascular Diseases. Written informed consent was obtained from all patients. 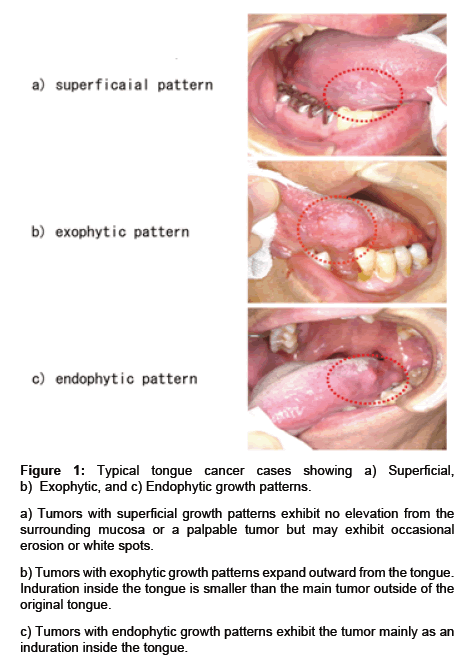 The choice of treatment modalities for T1 and T2 tongue cancer remains controversial among physicians; some recommend simple resection, whereas others suggest intensive treatment such as surgery combined with chemoradiotherapy accompanied by neck lymph node dissection. To establish an appropriate treatment strategy for each patient, it is necessary to clarify the risk of local recurrence in each cancer. The present analysis revealed that the mode of tumor invasion and vimentin expression were predictive of local recurrence in patients undergoing intraoral resection. Tumors with a Ki67 labeling index less than 10% exhibited a higher ratio of local recurrence compared to those with indices greater than 10%, although this difference was not significant. Nevertheless, the Ki67 labeling index was identified as an independent factor affecting local recurrence in the multivariate analysis. The mode of tumor invasion exhibited a close correlation with tumor recurrence. Among 14 tumors with the INF-gamma pattern, seven experienced tumor recurrence. However, 9 out of 119 showing INF-alpha or INF-beta invasion developed recurrent tumors. Previous reports indicate that the most severe pattern of invasion is a strong risk factor for local recurrence and mortality [10]. In the present study, the most infiltrative pattern was selected in tumors with mixed patterns of infiltration at the tumor edge, and INF classification proved to be a useful marker to predict local recurrence.

Originally observed in morphogenesis during embryonic development, EMT has subsequently been observed in various pathological conditions in adults, including cancer and fibrosis [7]. During EMT, the disruption of tight junctions, loss of cell polarity, cytoskeletal changes, and formation of actin stress fibers are observed. Moreover, EMT causes cells to acquire mesenchymal features, including a spindle-shaped morphology, and express mesenchymal proteins, including vimentin [9,11]. TGFβ signaling activates many transcriptional factors involved in EMT, such as Snail, Slug, ZEB1/ deltaEF1, and ZEB2/SIP1, and is considered a master regulator of EMT [8]. The present study clearly demonstrated that EMT, as evidenced by vimentin immunohistochemistry, represents a risk factor for tongue cancer recurrence. Recently, Jensen et al. reported the expression of factors involved in EMT, including TGFβ activation, in tumor budding of oral squamous cell carcinoma [12]. Tumor budding was identified as a risk factor for tongue cancer recurrence [10], although further investigation is necessary to clarify the correlation between EMT and the budding grade of tumors.

Table 2: Correlation of clinicopathological factors with vimentin expression in tumors.

The clinical growth pattern has also been recognized as an important factor affecting local recurrence; in this study, the growth pattern was classified as superficial, endophytic, or exophytic. In the present study, tumors with exophytic growth exhibited the lowest rate of recurrence, whereas those with endophytic growth exhibited the highest recurrence rate, although this difference was not significant. Similarly, previous studies reported high risks of recurrence in tongue cancers exhibiting endophytic growth [13,14]. Thus, circumspect estimation of the surgical procedure prior to operation is needed for tongue cancers with endophytic growth patterns. Positive surgical margins are also associated with local recurrence. For instance, recurrence is twice as likely when tumor cells are found within 5 mm of the resection stump compared to when no tumor cells are observed [15]. In the present study, a margin of more than 10 mm was observed in all of the primary tumor specimens from patients who developed recurrent tumors (data not shown); thus, recurrence was unlikely to be due to tumor cells remaining in the resection stump. In the present study, previously reported factors affecting recurrence, such as size, depth, differentiation, and lymphatic and vascular invasion of the tumor, showed no influence on tumor recurrence. The present study included patients receiving intraoral resection but not radical operation; therefore, the factors affecting recurrence might differ from previous reports. Increased tumor size has been linked to cervical nodal involvement, high recurrence rate and poor prognosis [16].

In conclusion, the mode of tumor invasion and EMT, as evidenced by vimentin immunohistochemistry, represent useful markers for the identification of high-risk patients with tongue cancer receiving intraoral resection. Intense follow-up after surgery with the aid of multimodal therapies is necessary for patients in this high-risk category.

There were no conflicts of interest in the study. This work was supported by grants from the Japan Society for the Promotion of Science (15K08391).

Copyright: © 2016 Mohri T, et al. This is an open-access article distributed under the terms of the Creative Commons Attribution License, which permits unrestricted use, distribution, and reproduction in any medium, provided the original author and source are credited.