1.1. Objective: Medicinal tablets are sometimes difficult to swallow, even for healthy individuals. Accordingly, it is likely more difficult for patients to swallow tablets after oral surgery for tongue tumors. In this study, we aimed to investigate the dynamics of swallowing tablets in the recovery period following surgery for tongue tumors.
1.2. Methods: Two experiments were conducted (Experiment 1 and Experiment 2). In Experiment 1, 20 tongue cancer patients swallowed simulated tablets and underwent videofluoroscopic (VF) examination of swallowing before and after surgery. The ability or inability to pass the tablet to the esophagus and the number of swallowing attempts required to ingest the tablet were evaluated. In Experiment 2, 48 similar subjects swallowed thickened barium and simulated tablets and underwent VF examination of swallowing after surgery. The ability or inability to pass the tablet to the esophagus, the number of swallows required to ingest the tablet, the tablet position after the initial and the final swallowing reflexes, and the oral transit time and pharyngeal transit time for swallowing the thickened barium solution and simulated tablets were evaluated.
1.3. Results: After subtotal glossectomy, more subjects were unable to pass the tablet to the esophagus after surgery rather than before surgery. However, after surgery, patients needed more numbers of swallowing reflex attempts in order to successfully swallow tablets. Also, the tablets remained not only in the mouth, but also in the epiglottic vallecula and pyriform sinus. In the patients who could pass the tablet, the oral transit time of the thickened barium solution was shorter than in the patients who could not.
1.4. Conclusion: In cases of subtotal glossectomy, tablet intake should be avoided, particularly in the recovery phase, and VF or endoscopic evaluation of swallowing should be performed when tablets are prescribed. After tongue cancer surgery, patients should be recommended to make multiple swallowing attempts when swallowing tablets.

Compared to foods, medicinal tablets are difficult to swallow: even 10-20% of healthy subjects have trouble swallowing tablets [1,2]. Compared to healthy subjects, patients with dysphagia reportedly experience more difficulty swallowing tablets and require an increased volume of water for tablet ingestion, a longer ingestion time, and an increase in the number of swallowing attempts [2-4]. In order to improve compliance with taking medication, investigations into the dosage forms and physical properties of tablets that can be easy to ingest have been conducted in the past [5,6]. The larger the tablets, the harder they are to ingest; conversely, if they are too small, they can be difficult to handle. A tablet size of 7-8 mm in diameter is considered the easiest for Japanese people to swallow [4,7,8].

Immediately after surgery for tongue tumors, dysphagia occurs. The mobility of the tongue is reduced due to glossectomy, and mastication and passage of food from the oral cavity to the pharynx become difficult. Furthermore, since the range of movement of the root of the tongue is restricted, pharyngeal constriction becomes dysfunctional. When neck dissection is performed to prevent metastasis of the tumor to the lymph nodes, dysfunctions of raising and closing the larynx and opening the entry to the esophagus occur. When the range of the tumor excision is enlarged, dysphagia can be severe [9-14]. In particular, when the root of the tongue is excised, dysphagia is more likely to occur [15-17]. For patients in an advanced tumor stage, and especially for those who need subtotal glossectomy, an increase in the bolus passage time occurs preoperatively [18,19]. Therefore, in patients who have undergone tongue cancer surgery, retention of tablets in the oral cavity or pharynx may occur due to dysphagia, and so the decision to prescribe tablets can be difficult. Moreover, retention of tablets can cause ulcers in the esophageal mucosa, and similar caution is relevant for the mucous membranes of the oral cavity and pharynx [20].

Tongue cancer patients who underwent tumor excision followed by immediate reconstruction and neck dissection at the Tokyo Medical and Dental University Hospital Faculty of Dentistry between May 2010 and October 2012 were enrolled in the present study.

Patient images were collected from the VF image database and analyzed and investigated using a personal computer (FMVA53CW, Fujitsu, Tokyo, Japan). For VF examinations, an X‐ray fluoroscopic table (Medix-900DR, Hitachi Medical Corporation, Tokyo, Japan; 30 frames/sec) was used. For image recording and time measurement, a digital video recorder (GV-D1000, Sony, Tokyo, Japan) and video timer (VTG-33, FOR-A, Tokyo, Japan) were used. The simulated tablet was manufactured using barium (baritogensol, baritogen HD, Fushimi Pharmaceutical, Kagawa, Japan), and had a cylindrical shape with a diameter of 8 mm and a length of 4 mm. The swallowing of the simulated tablet was performed in a sitting position in the following manner: the patients put the tablet on the dorsum of the tongue by themselves; then, after instruction from the investigator, swallowed the tablet while drinking a cup of water thickened with a thickening agent and prepared as a purée, containing no barium. The viscosity was adjusted using a thickening agent (Toromi Up Perfect, Nisshin Oillio, Tokyo, Japan). Cases where the tablet did not pass the upper esophageal sphincter (UES) 30 seconds after the instruction to swallow were deemed ‘unable to pass’. Subjects who had problems with arousal or dementia, and thus had difficulties with communication, were excluded from the study.

A total of 20 patients who underwent swallowing assessment pre and postoperatively by VF using a simulated tablet were investigated in this study arm.

Simultaneously with Experiment 1, for postoperative VF investigation of tongue cancer patients who underwent tumor excision/immediate reconstruction and neck dissection, 48 patients were enrolled and underwent assessment of both the swallowing of 4 mL of a thick barium solution and a simulated tablet.

Statistical analyses were performed using SPSS 11.0J for Windows (IBM, New York, NY). The Mann-Whitney test was used for comparisons of OTT and PTT, and the chi-square and Fisher’s exact tests were used for the comparison of the ability or inability to pass the tablet. Significance levels were set at <5%.

This study was performed with the approval of the Tokyo Medical and Dental University Faculty of Dentistry ethics committee (receipt number 962). 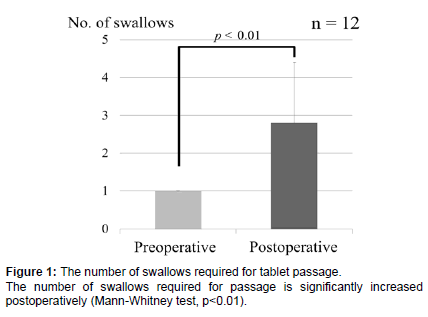 The number of swallows required to pass the tablet from the oral cavity to the esophagus was 2.8 ± 1.7 (1-6) times in the 26 cases (of the 48 investigated) where passage was possible. 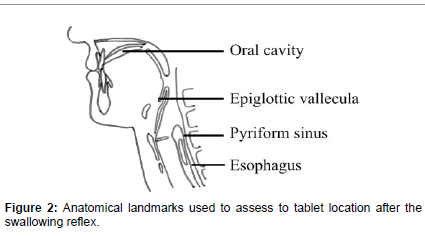 Figure 2: Anatomical landmarks used to assess to tablet location after the swallowing reflex.

When comparing the passage of tablets based on the extent of glossectomy, there was no significant difference. However, a high proportion of patients were unable to pass the tablets after subtotal glossectomy, and when comparing the pre- and postoperative findings, a significant increase was observed in the proportion of those who could not pass the tablets after surgery. When the extent of glossectomy increases, swallowing function is known to decrease [9,11,15] and subtotal glossectomy in particular results in difficulties with passing a bolus and an increase in mealtime duration [19,21]. Moreover, when compared with subtotal glossectomy, partial glossectomy and hemiglossectomy result in a more mild form of dysphagia, which is known to improve within a few months to 1 year postoperatively [19,22-24]. Therefore, in patients who undergo subtotal glossectomy, it is considered that tablet intake should be avoided, particularly in the recovery phase. Over time, resolution of dysphagia can be expected; however, assessments of the ability to ingest tablets should be performed using VF or VE while confirming food intake status. With surgical procedures, no significant differences were observed in the pass ability. However, patients undergoing segmental mandibulectomy and accompanying rectus abdominis flap/plate reconstruction had an increased tendency to be unable to pass.

Moreover, there was no significant difference in the proportion of individuals able or unable to pass according to the TNM classification. Further investigation based not on the stage of the tumor but on the site of excision, occurrence of neck dissection, and the extent of dissection is required. Regarding retention in the oral cavity, the entry of the tablet into the dead space was the cause; therefore, avoiding the creation of dead space with the use of a flap and of dentures may be important [25]. 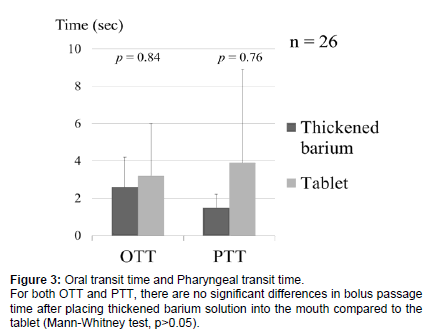 Figure 3: Oral transit time and Pharyngeal transit time.
For both OTT and PTT, there are no significant differences in bolus passage time after placing thickened barium solution into the mouth compared to the tablet (Mann-Whitney test, p>0.05). 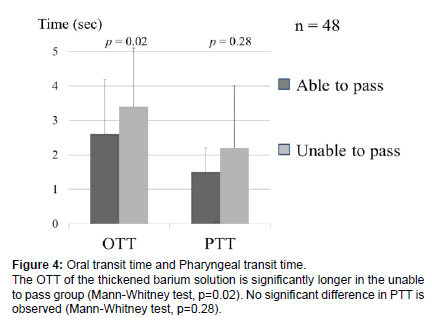 Preoperatively, all cases required only one swallow to ingest the tablet. However, when only considering postoperative cases where passage was possible, an average of 2.8 (median 2) swallows were required. Mann et al. reported that outpatients with dysphagia require a median of 3 swallows to ingest a tablet [3]. Furthermore, the location of tablet retention was predominantly in the oral cavity due to the effect of glossectomy; however, there were also retentions in the epiglottic vallecula and pyriform sinus. Therefore, even in cases where there is no tablet retention in the oral cavity after ingestion, the possibility of retention in the pharynx must be considered, and a confirmation of the sensation of retention within the pharynx and additional swallowing should be performed.

The normal OTT and PTT values for liquids in healthy individuals are 1-1.5 and 0.38-0.48 seconds, respectively [26-31]. In the current study, a thickened barium solution resulted in an OTT of 2.6 ± 1.6 seconds. A lengthening of the OTT is known to occur in tongue tumor patients [32,33]. Pauloski et al. reported that the OTT of thick solutions 1 month post-surgery is 2.33 seconds, which is similar to the present findings [34]. Regarding PTT, a lengthening compared to normal healthy individuals was seen for both the thickened solution and tablets, and the tablets in particular showed an increase in the transit time through the pharynx. However, a longer transit time through the pharynx occurred in cases of tablet retention in the pharynx, and there was large variability in the values. In cases where the tablet passage was not possible, the OTT of the thickened solution was longer than in cases where passage was possible. Therefore, in patients where the passage of a thickened solution is difficult, the passage of tablets is also likely to be difficult. In institutions where assessments using simulated tablets are not performed, an extrapolation of the ability or inability to pass may be made from the passage of thickened solutions.

After subtotal glossectomy, many patients are unable to swallow tablets, and confirmation using VF or VE should be performed when prescribing tablets. For the swallowing of tablets after tongue cancer surgery, patients should be instructed to attempt multiple swallows. Even in cases where tablet retention in the pharynx is not seen in the oral cavity, investigation of the sensation of retention should be performed.

Funding: This research was carried out with a research grant from the Japanese Society of Dysphagia Rehabilitation, Japan (2010) from August 1st, 2010 to July 31st, 2011.

Copyright: © 2016 Yoshizumi Y, et al. This is an open-access article distributed under the terms of the Creative Commons Attribution License, which permits unrestricted use, distribution, and reproduction in any medium, provided the original author and source are credited.