Objective: Evaluate and correlate the characteristics of swallowing and the body mass index (BMI) of institutionalized elderly individuals and older adults.

Method: Cross-sectional study, composed of 58 institutionalized (GI) and noninstitutionalized individuals (GII) who fed orally, aged over 60, sex and age matched. They were submitted to functional endoscopic evaluation of swallowing (FEES) and classified according to BMI as underweight, healthy weight, overweight or obese. Individuals with stroke sequelae, antecedents of head and neck surgery and radiotherapy were excluded.

Conclusion: Oropharyngeal dysphagia is highly prevalent in institutionalized and noninstitutionalized elderly individuals. We did not find any association between the findings suggestive of dysphagia by FEES and the group classified as underweight.

We emphasize that this population has a higher incidence of dysphagia and we suggest the need for other studies with a larger population to better categorize dysphagia and its possible association with weight loss and its sequelae.

Swallowing disorders have been increasingly recognized as an emerging concern by health care professionals, especially those treating senior patients [1-5]. Presbyphagia are the changes in the swallowing process that occur in parallel to the aging process [3,6], while dysphagia may be defined as “any disruption in the swallowing process” [5] and its prevalence around 65 years of age is estimated to be approximately 13%. Prevalence varies according to the group studied: 16% among the 70-79 year old (yo) age group, 33% among the >80 year independently living adults [1,4], 51% institutionalized patients [1,6].

According to the World Health Organization - body weight tends to increase with age (65-75 years) because energetic necessities in the elderly decreases, by the reduction of spent energy; but over 70 years the elderly become more vulnerable to compromising nutritional status [7]. The factors that increase morbimortality among the elderly [1-3,5] are non-intentional loss of weight, reduction of the nutritional state and risk of pneumonia. Functional Endoscopic Evaluation of Swallowing (FEES) is the primary procedure done on patients with suspected pharyngeal dysphagia [8]. Nowadays recents researchs have demonstraded that FEES is a standard of care and has sensitivity equal to or greater than that of Videofluoroscopic Swallowing Study (VFSS) until then considered standard gold in swallowing search [8-14].

The BMI is the anthropometric indicator [7] known for assessing the nutritional status of dysphagic patients and to propose strategic measures before the consumption in the frail elderly.

The aim of this study is to better understand the association between swallowing disorders (presbyphagia and dysphagia) and its impact on the nutritional characteristics in the elderly.

This was an observational cross-sectional study that evaluated 58 subjects over 60 years old, oral intake in two groups (group I- 29 old adults living in a long-term institution; group II- 29 non-institutionalized subject volunteers). Subjects were excluded if they had the previous chemo-therapy and/or radiation therapy or had dysphagia treatment. Subjects passing all criteria were invited to sign a consent form and formally joined the study. The study was approved by the Ethics Committee of the School of Medicine-Federal University of São Paulo, CAAE 08674612.2.0000.5505 and it was approved (152.28).

Subjects were submitted to FEES using the Langmore technique [11] with slight modifications [8,10-14]. FEES was chosen as a diagnostic tool, because the assessment was done outside a medical facility and its results are considered standard of care, with an equivalent sensitivity as videofluoroscopy [1,8,14]. FEES equipment consisted of a 3.2 mm diameter flexible fiber optic nasolaryngoscope (Machida flexible scope, Machida Inc., Orangeburg NY, USA) linked to a light source, image capture and visualization and recording system (Telepack Storz® Tuttlingen, Germany). Images were then copied to a SanDisk® drive (Western Digital Corp, Irvine, CA, USA) and transferred to a personal computer for further analysis.

The procedures were all performed by the same physician. During the examination, subjects were instructed to sit still on a hard chair as they would usually do when they eat and drink. All food were offered, consisting of strawberry pudding (10 ml), skimmed milk (up to 50 ml cup) and one cracker as a model for three distinct consistencies of food (paste, liquid and solid, respectively). The food was dyed green with food colorant [1,13]. All subjects were allowed to swallow as many times as necessary until they felt that the food was properly swallowed, without a verbal command to stop. We counted how many times the subject needed to swallow the food to feel that it was swallowed. We considered a normal swallowing up to the third swallow.

Features captured during the exams were classified into three independent FEES findings: (1) pharyngeal residue: the presence of a post-swallow food residue in the pharynx (vallecula, piriform sinus, or coating posterior pharyngeal wall, postcricoid area) not entirely cleared by swallowing [15,16]. We considered a normal clearance of the food when it (one or more consistencies) was completely cleared within three consecutive spontaneous swallows [17]; (2) laryngeal penetration: the finding of saliva or food residue above the vocal folds [18], from the upper border of the epiglottis, including a laryngeal face of the epiglottis to the upper border of the vocal folds; (3) laryngeal– tracheal aspiration: saliva or food residue in the airway, below the vocal folds that can be ejected from the larynx out of the airway [18].

Following the FEES, their nutritional characteristics were evaluated through body mass index (BMI) according to the Mini Nutritional Assessment (MNA®) is relation between weight (in kg) and height (in m2), they were classified in: Underweight, Healthy and overweight and obese [7,19-21].

To measure the weight, it was used a portable digital electronic balance, calibrated in kilograms (kg), platform type, Vitallys brand. The height was calculated by measuring the individual without the shoes in an upright position, looking forward with the head up and not facing down, with the heels together, buttocks and shoulders pressed against the wall. The metric ratio, in centimeters, was given by a measuring tape, from the top of the head to the sole of the foot.

Statistical study applied through chi-square test and Fisher test. The statistical significance was set at p<0.05.

The 29 elderly individuals who were sex and age matched, fed orally and lived in a long-term institution (group I) were compared with group II, which consisted of other 29 older adults, who had independent living. We excluded individuals with stroke sequelae, previous head and neck surgery and radiotherapy. Subjects were mainly female (66%) and had a mean age of 79 years (range 61-96 years). Features captured during FEES examination (Figure 1) showed that presence of pharyngeal residue was the most prevalent among all the three FEES findings in two groups, in 19 subjects (65.5%) in group I and 12 subjects (41.3%) in group II. Followed by laryngeal penetration in 4 subjects (13.7%) in group I and 2 (6.8%) in Group II and laryngeal aspiration in 2 (6.8%) in group I and no aspiration in group II. These two subjects who aspirated also had signs of laryngeal penetration and pharyngeal residue (A*/FR/P). Oropharyngeal (OP) Dysphagia was presente in 65,5% in group I and 41,3% in group II. Comparing the FEES findings between the groups we observed that group institutionalized (GI) had more pharyngeal residue, laryngeal penetration and aspiration than no institutionalized group (GII) but no significant difference between them. 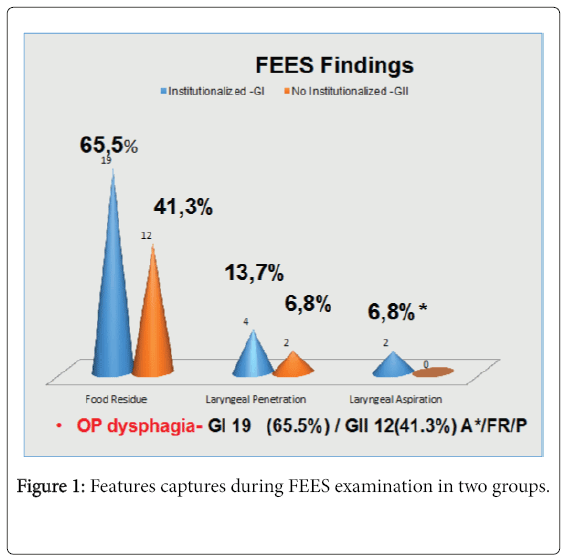 Body mass index (BMI) according to do Mini Nutritional Assessment (MNA®) they were classified in underweight, healthy and overweight and obese (Figure 2), respectivelly in group I and group II, four subjects (13.7%) and one subject (3.4%) was classified as underweight, 14 (48.2%) and 15 (51.7%) as overweight or obese and 11 (37.9%) and 13 (44.8%) as healthy weight. No statistic difference was observed between groups considering dysphagia and BMI, neither the association between these FESS findings and the underweight group did not show statistical significance too. 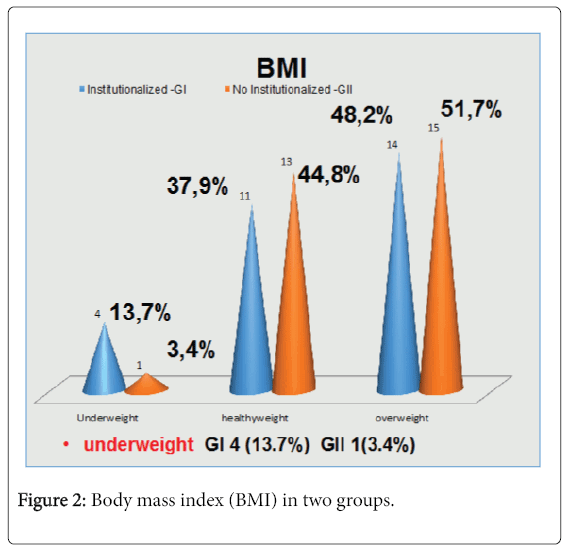 Dysphagia attacks 40 to 65% of the individuals with more than 60 years of age and did not show a correlation with underweight people. FEES, performed by the otolaryngologist, is the chosen exam for the diagnosis, favoring the best indication and multidisciplinary approach for each patient.

The main objective in our study was to better understand the association between swallowing disorders (presbyphagia and dysphagia) and its impact on the nutritional characteristics in the elderly. Dysphagia and reduction of the nutritional state increase the risk of pneumonia and morbimortality among the elderly’s frailty [1-3,5]. Nowadays, sarcopenia has been classified as a geriatric syndrome, besides of “the four geriatric giants”, immobility, instability, incontinence and intellectual impairment [22]. Also, we defend that any elderly, with any sign of dysphagia, should receive diagnostic attention and care like a patient with geriatric syndrome [4].

On this study, the subjects demonstrated an inability to clear food from their pharynx in three free swallows and pharyngeal residue in the elderly may be an early sign of dysphagia, being more frequently detected than penetration and aspiration. We expected to find more subjects classified as underweight, even though we didn’t find any association between these FEES findings and the underweight group and we should be aware that this underweight group may be those who become sarcopenic. Besides that, we should include in our routine the BMI for assessing the nutritional status of elderly dysphagic patients and this elderly should be approached broadly as in the geriatric syndrome [4]. These diagnoses should not be neglected, proposing a multidimensional strategic approach to avoid complications and deterioration of the general state in the frail elderly.

The small sample (58 subjects) is a limitation on our study and the association between FEES findings and the subjects classified as underweight was low, maybe we need to have a follow-up with a larger sample to certify that this relationship exists.

The possible bias is that the subjects that accepted to participate in the study only agreed to it because had already presented some sign or symptom of dysphagia, it seems unlikely, because the patients with more evident symptoms would already have looked for specialized medical care. Also, the main researcher did not detect any specific reasons, during the interviews, that subjects with previous symptoms could be more interested in participating. Finally, the only way to exclude this possible sample bias would be to evaluate a large aleatory sample, which can be made in future studies.

It is important to emphasize that the main positive point of this study was the dynamic evaluation of all patients, by an experienced otolaryngologist, using FEES; therefore, facilitating the best indication of treatment to be recommended.

We should not underestimate the diagnosis of dysphagia and active surveil the relation between dysphagia and its impact on BMI. Besides that, should be offered a multidisciplinary approach, to avoid complications and decline in the elderly's health status.

The presence of food residue in the hypopharynx infers the inability to swallow, thus dysphagia, which may be a more frequent early sign than the findings of penetration and aspiration in institutionalized and non-institutionalized elderly individuals.

We did not find any association between the findings suggestive of dysphagia by FEES and the group classified as underweight.

The authors received no financial support for this study.

All author and co-authors declare that they do not have conflict of interest.

All procedures performed in studies involving human participants were in accordance with the ethical standards of the institutional, CAAE 08674612.2.0000.5505 and it was approved (152.28) by UNIFESP-EPM.

Copyright: ©2018 De Lima Alvarenga EH, et al. This is an open-access article distributed under the terms of the Creative Commons Attribution License, which permits unrestricted use, distribution and reproduction in any medium, provided the original author and source are credited.