Copyright: © 2015 Sharma S, et al. This is an open-access article distributed under the terms of the Creative Commons Attribution License, which permits unrestricted use, distribution, and reproduction in any medium, provided the original author and source are credited.

Urtica parviflora is herbaceous perennial medicinal plant distributed in Himalayan region from 400m to 3000m amsl altitude range. In the present study, five genotypes of U. parviflora were collected from different altitudes having variability in morphological traits. This genotype was subjected to Random Amplified Polymorphic DNA (RAPD) marker analysis to assess the genetic diversity at molecular level and develop molecular marker for their identification. Fairly rich genetic diversity was found through RAPD marker analysis. A total 66 scorable bands were produced in five samples with 8 primers. Out of 66 bands, 43 bands were found to be polymorphic i.e., 65.15% polymorphism. The dendrogram of samples shows three major clusters. The samples of similar altitudes were found to be present in one cluster.

Family Urticaceae (nettle family), a part of the larger group order Urticales, is mostly tropical and subtropical in both the hemispheres Zomlefer, Mabberley [2,3] have listed 48 genera with 1050 species in family Urticaceae. Nettles (Genus: Urtica), are herbaceous perennial plants but some are annual and few are shrubby. There are 30-45 species of flowering plant of the genus Urtica in the family Urticaceae, with a cosmopolitan though mainly temperate distribution. The most prominent member of the genus is the stinging nettles Urtica parviflora and Urtica dioica, native of Europe, Africa, Asia, and North America. The plant is evenly distributed in Himalayan region especially in lower to mid hill zone with 450m to 3500 m amsl altitudinal range [4]. U. parviflora leaves have stinging hairs and used in dysentery, joint pain and liver disorders [5]. Leaves and fresh roots used for the treatment of fractures, dislocation of bones, boils and treatment of dermatitis [6].

Knowledge of the amount and the distribution of genetic variation among the population provide a guide for the predicting the degree of inheritance, variation and level of heterosis that are prerequisite for effective breeding programs [7]. Genetic polymorphism is classically defined as the simultaneous occurrence of a trait in the same population of two or more discontinuous variants or genotypes. A major achievement occurred in marker technology with the development of markers based on DNA sequence. The ideal DNA marker should be highly polymorphic and evenly distributed throughout the genome. Codominant inheritance, easy access availability, high reproducibility is the properties of ideal DNA marker [8,9]. The genetic markers based on DNA provide a genetic diagnostic tool that permit direct identification of genotypes in environment independent manner in any tissue and developmental stage [10]. It will have great benefit for plant breeders when the DNA markers are closely linked to traits of interest. Various types of DNA-based molecular techniques were utilized to evaluate DNA polymorphism like RAPD, RFLP, AFLP [11-13]. The technique based on PCR amplification of genomic DNA with single primers of arbitrary nucleotide polymorphism was called Randomly Amplified Polymorphic DNA (RAPD). It was reported that the percentage of GC contents of primers should be greater than 50% and primer sequence being 9-10 nucleotides in length [8,14]. The amplified fragments are separated electrophoretically and banding patterns are detected by different methods such as staining and autoradiography.

RAPD markers were used for evaluation of genetic diversity in many plant species such as tobacco [15] Lycopersicon [16], sugarcane [17], Solanum [18].

Fresh juvenile leaves of U. parviflora were collected in the first week of month of March, 2011 from five different altitudes in Nainital district of Uttarakhand (India) viz., Mukteshwar (2800m amsl), Nainital (2200m amsl), Ghorakhaal (2000m amsl), Bhimtal (1300m amsl) and Haldwani (424 m amsl) [4]. These leaves were brought to laboratory in perforated polybags. After washing these were kept in deep freezer at -20°C temperature.

DNA isolation was done using CTAB (Cetyl trimethyl ammonium bromide) method. The leaves were ground in liquid nitrogen and DNA was extracted with 2% CTAB extraction buffer (2% CTAB, 1.4M NaCl, 100 mM Tris HCl, 20mM EDTA and 1% Mercaptoethanol). Further isolation was continued according to the method described by Doyle and Doyle (1990) with some modifications due to high content of phenolic compounds and polysaccrides in Urtica. In the extraction buffer 2%-4% of PVP (Polyvinylpyrrolindone) was used for removal of these phenolic compounds. Phenol: chloroform: isoamyalcohol (25:24:1) was used in place of chloroform: isoamyalcohol (25:24). After addition of isopropanol, DNA gets precipitated along with pigments, due to high content of chlorophyll and polyphenols in this species. Therefore, immediately after adding isopropanol, DNA spooled out with the help of micropipette in separate eppendorf tube.

Quality of the extracted DNA was checked by running on 0.8% agarose gel. Ethidium bromide solution was used to stain the gel. Purity and concentration of genomic DNA was estimated by calculating the ratio of optical densities measured at 260-280 nm with a spectrophotometer (Thermo Scientific Type UV1, England). Appropriate dilutions of DNA were made for further amplification and RAPD analysis.

PCR products were electrophoresed on 1.8% (w/v) agarose gels, in 0.5X TAE Buffer at 80 V for 3 hrs and then stained with ethidium bromide (0.5μg/ml). Gels with amplification fragments were visualized and photographed under UV light and the intensity of bands was observed. Out of twenty primers used eight primers produced recognizable bands. The photographs of gels were used to score data for RAPD markers. Each DNA fragment amplified by a given primer was considered as a unit character and the RAPD fragments were scored as present (1) or absent (0) for each of the primer accession combinations. Diversity coefficient of each primer (number of polymorphic bands/ total number of band) and pairs-wise genetic similarity were calculated using NTSYS-PC (version 2.11a) software [19].

The Urtica genotypes selected on the basis of morphological characters were subjected to DNA analysis to determine the genetic diversity available at different altitudes in Himalayan region. DNA isolated by CTAB (Cetyl trimethyl ammonium bromide) method yielded strong and reliable amplification products showing its compatibility for RAPD – PCR using random primers. DNA isolated by this method was of high purity (A260/A280 ratio were 1.6-1.8) having very low contamination of polyphenols and polysaccharides (Table 1). For this purpose, DNA extracted from the Urtica genotypes was amplified using twenty random primers and run on the agarose gel. Out of 20 RAPD primers used, eight primers generated strong amplifications and resulted in polymorphic products (Table 2). The remaining primers were not considered for compiling the results because they were either not polymorphic or did not give clear amplifications. A total of 66 scorable bands were produced in five samples with eight primers. This data was utilized for further computation. Out of 66 bands 43 bands were polymorphic (65.15%). Data matrices were prepared in which the presence of bands was coded as (1) and absence as (0). The similarity index values obtained for pair wise comparison among U. parviflora populations from five different altitudes are shown in Table 3. The similarity index based on eight RAPD markers ranged from 42% to 78%. Similarity was found in genotype collected from similar altitudinal range pairs of Bhimtal and Haldwani (78%) order followed by Mukteshwar and Nainital (65%), Mukteshwar and Ghorakhaal (59%), Nainital and Ghorakhaal (57%) and Ghorakhaal and Bhimtal (53%). Minimum similarity was observed between the genotype pairs of Mukteshwar and Haldwani (42%). A dendrogram was constructed from five different populations of U. parviflora based on the similarity index (SI) values. The SI values were computed as a ratio of number of similar bands to total number in pair wise comparison of populations. The similarity matrix obtained by RAPD bands among five U. parviflora populations are shown in Table 3. Based on DNA finger-printing data, the genetic distances for five U. parvifloa populations were calculated using NTSYS (Numerical Taxonomy System) program. Option Sequential Agglomerative Hierarchical Non-overlapping (SAHN) was used which resulted in the construction of dendrogram shown in Figures 1-4.

Table 1: The quantity and purity of DNA obtained from the qualitative and quantitative analysis of our five DNA samples. Figure 1: U. parviflora sample collected from five places of Kumaun region of Uttrakhand. 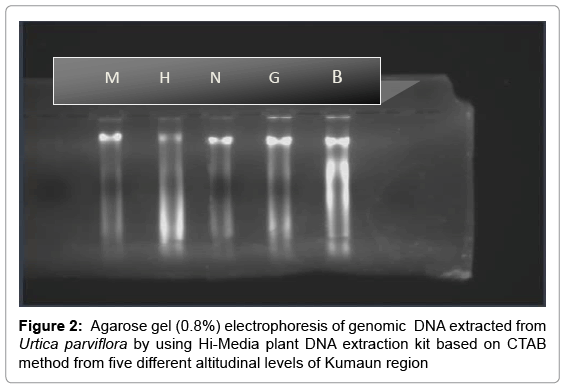 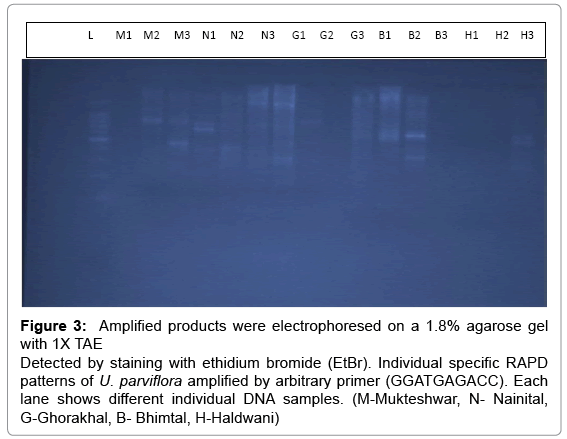 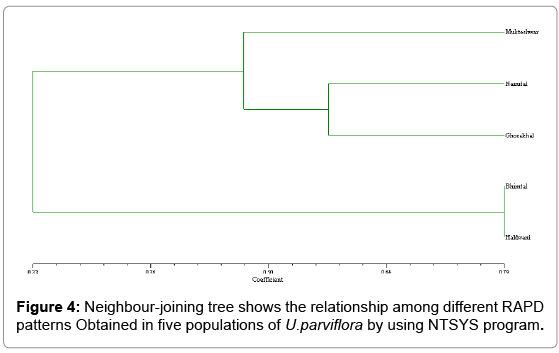 Molecular characterization of germplasm is basic to the improvement of the species and can be done at the DNA level. Present findings suggest that the genetic variability present in U. parviflora was quite appreciable due to elevational variation. As sample from lower altitudes (Haldwani) showed low genetic similarity with sample collected from higher altitudes (Mukteshwar). There is a general belief that nettle accessions found at higher elevations have high medicinal value compared to accessions found in lower altitudes. Various characters might be responsible for this assumption, as, U. parviflora leaves are known to be genetically variable in number of stinging hairs per unit leaf area as well as other characters. It was found that leaf samples collected from lower altitudes have lesser number of stinging hairs as compares to samples collected from higher altitudes. Overall variations in trichome numbers accounted for difference in important clinical values associated with this plant with respect to plant distribution at different altitudes. Various environmental factors like rainfall, temperature, altitude and the dosage of the UV rays may be responsible for such variation within the species. Spatial and genetic variations are often assumed to result from environmental heterogeneity and different selection pressure.

The results of study indicate that there is rich genetic diversity is available at molecular level in U. parviflora genotypes growing at different altitudes of Himalayan region in Uttarakhand. It would also be helpful for the planning of breeding strategies and future programs. The genetic diversity might be utilized for breeding purpose to tailor the genotypes having high medicinal value and useful for pharmaceutical industry.