Copyright: © 2015 Korsavi S, et al. This is an open-access article distributed under the terms of the Creative Commons Attribution License, which permits unrestricted use, distribution, and reproduction in any medium, provided the original author and source are credited.

The aim of this paper is to identify descriptive and quantitative features of conical domes to introduce geometry and proportion of their plans through analytic reviewing of case studies. Since geometry and proportion have been studied in conical domes, plans of conical domes need more attention in terms of geometry and proportion. Authors hypothesized that with introducing a new Ratio, analyzing geometry would be possible. This Ratio revealed nearly the value of √2 or √3 which is one of the most important Ratios in Islamic architecture. Authors have presented diagrams of superimposed squares and circles to suggest principles of designing with such Ratios. All kinds of plans whether circles or polygons can be designed based on these diagrams since circle is the basic geometry in Islamic architecture. Studying conical domes is important since studies show that their construction has lasted until Qajari era and may continue despite advances in other kinds of domes. Such studies strengthen the connection between past and present architecture of Iranian architecture.

Islamic art favors geometry in general and geometrical proportion in particular which carry great importance in the design process of Islamic art [1]. Islamic architecture has long been known as the embodiment of mathematical and geometrical premises [2]. In an architectural monument all dimensions, both in its integrity (height, length and width) and in its components (including geometrical surface patterns), are interrelated and never divorced from geometry [3]. Geometry as science for selection of structural dimensions such as height, length and width of the building and its structural elements governs the structural behavior of the building, the behavior that follows the geometry. The right geometry makes the building behave correctly [3]. In Persian architecture, it is geometry that provides diverse stylistic developments for constructions and designs; not only to serve a function, but also to evoke an emotional response by harmonization of the constructional elements, such as domes and columns and decorative elements [1]. Seyyid Hossein Nasr argued that geometry and rhythm manifest a doctrine of unity which is central to Islam, upon which Islamic art developed based on mathematical ratios and proportions which represent the very heart of Islam [4].

On the other hand, geometry involves proportions and prime roots that are considered the most beautiful proportions (the proportions of beauty) [4]. Proportion in architecture can be said to be ‘‘an harmonious relationship between the parts, with and within the whole’’ [3]. In architecture, the role of the proportioning system is to create a set of visual relationships between all the different parts of a building, and between the parts and their whole. The aim is to provide a sense of order in the overall structure [4]. Geometrical analysis of many Persian historic buildings has proven that a complete knowledge of proportions was widely used in Persian architecture [5] and it was the basis of Persian aesthetics [3].

Regarding studies related to geometry and proportion of domes, some papers [2-4,6-16] are worth considering. As can be seen, much attention has been paid to geometry and proportion of domes and their patterns but not that much to geometry and proportion of Islamic plans [6], especially those of conical domes which have been ignored compared to other kinds of domes. Moreover, plans of conical domes are more likely to have special Ratios compared to pointed and bulbous domes mainly due to two reasons. First, technological and architectural advances has caused pointed and bulbous domes to be more various in geometry and proportion of plan forms. Second, pointed and bulbous domes have often been used in religious complexes than in single funerary buildings where the proportion and geometry of the whole complex becomes more important. In fact, such proportion may seem unique in the plans of conical domes. Authors hypothesized that having a Ratio in plans of conical domes does not seem inconceivable since geometry is apparent in other parts of these domes. We tend to examine the layout of these plans through samples to test our hypothesis. Accordingly, this paper is arranged into three parts: 1) studying descriptive information of case studies: morphology, plan form and their origin 2) Defining new Ratios based on quantitative features to test our hypothesis 3) introducing principles of drawing and designing.

Regarding the evolution of conical domes, double-shells are followed by one-shell domes and were mostly used due to climatic conditions like heavy raining [17]. Accordingly, these domes were first used in the north of Iran with such climatic conditions [18] to protect the internal shell from humidity [19]. Moreover, the interior shell could expose ornamentations with its proportionate dimension and the exterior shell could be designed higher to add significance to the building [19]. The triple-shell demonstrates the advancement of structural design by adding a third shell to enhance its stability [8]. The third shell provides more resistance against forces [20]. In the conical roof (shell) cases, stone slabs or brick layers rested on the lower roof (shell) with some internal voids for reducing the weight and protecting the lower parts [7].

Regarding different eras, there are numerous innovative architectural contributions made during Seljuks among which is advancing the use of conical domes [21]. Some of the most enduring signs of Seljuk architecture are the distinct types of polyhedral and conical domes which still stand in Iran as seen in Figure 1. These edifices are commonly well-known as a primitive architectural formula for the Islamic funerary buildings topped with conical and polyhedral shells which mainly appeared in the Seljuk period [8] (Figure 1).

During the Ilkhanid period, the construction of conical and polyhedral domes decreased considerably in comparison with the Seljuk era, but still there were two specific architectural achievements during this period, small brick connectors and extensive use of turquoise tile works as can be seen in Figure 2 [8].

The construction of conical and polyhedral domes became less important during the Timurid period due to two main reasons, by developing the use of pointed domes and with the introduction of the bulbous style [8]. It should be noted that these domes have also been built in hot-arid areas like Qom in this era. Its reason is mainly attributed to the fact that some great conical domes have been destroyed by sunnis1 in Ilkhanids era which lead to the usage of conical domes as the symbol of shias'2 buildings. That is why the usage of these domes became common in Qom and kashan after Ilkhani era without having any congruence with hot and dry climate of these cities [18]. Case studies of Timurids era show the emergence of polyhedral and pyramidal domes in religious complexes and hot-arid areas. Figure 3 shows case studies of Timurid era [22].

Still we can see the trace of these domes in different eras which surely shows their popularity among Muslims [23]. Another important point is that conical domes have appeared in religious complexes afterward and not as an individual funerary building. In some cases, the sanctuary's proportion can easily be addressed by conical domes and there is no need to construct domes with larger spans or heights. Shahzade Ebrahim in Kashan is among one of these complexes as can be seen below. This conical dome has been designed in a site with a lot of cypresses and near one of Kashan's old gates to attract attention when entering city. Therefore polyhedral dome is in complete agreement with required dimension, the shape of cypresses and location of the complex in city. That is why their construction continued in some cases even after Ilkhanids era (Figure 4).

Furthermore, the construction of conical domes have made progresses in following eras including the increased number of hedrons3 and increased height of drums as can be below Figure 5.

Twenty-five samples of conical domes, which were built in Iran, were subjects of this analysis. Authors examine plans of conical domes to test their hypothesis. Tables 1 and 2 show the descriptive and quantitative features of case studies respectively. In Table 2, exterior diameter (E) shows either diameter of the circular plan or diameter of the circle that surrounds polygon or has been surrounded by polygon. Moreover, O Ratio (external to internal diameter Ratio) is introduced to reveal geometry and proportion of plans which is the purpose of this paper. M and N Ratios help show the overall form of conical domes. In Table 2, dimensions are based on plans acquired from different papers. These plans have been drawn and dimensioned again by authors to find out exact figures (Tables 1 and 2).

Regarding the variety of case studies, it can be realized that conical and polyhedral domes are so various and have different morphological features and plan forms in each era. Generally, Islamic domes present a wide variety of sizes and types, but some geometric properties were repeatedly used in their composition designs. Nevertheless, no two samples are exactly the same [7]. 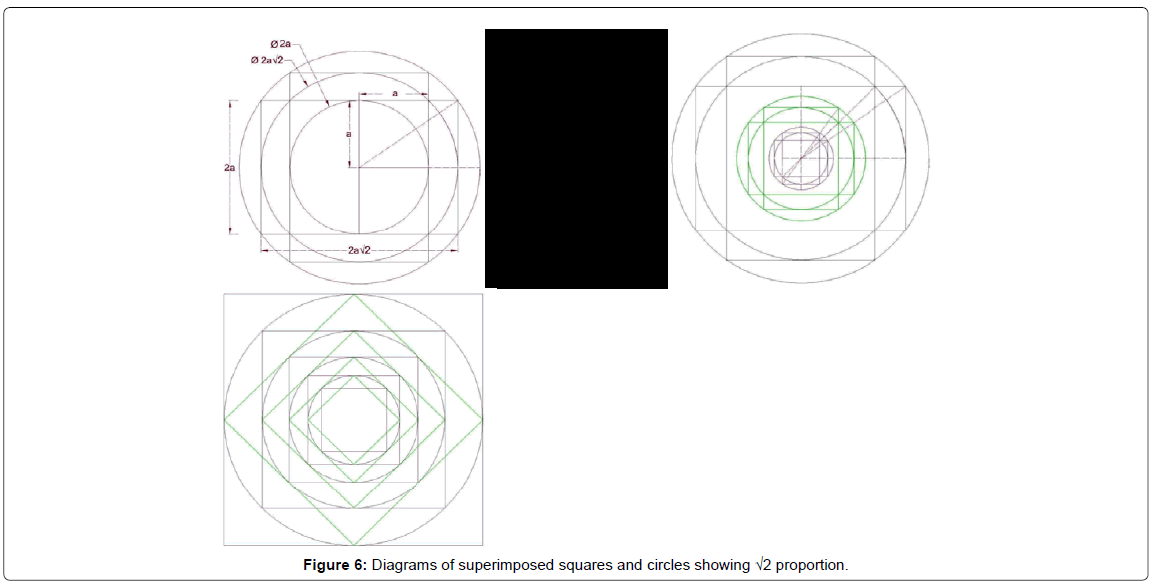 In the above diagrams, the circle plays a major role in defining and designing plans. The circle is an obvious example of a basic geometry, constituting all the proportional geometries inherent in traditional architecture. The circle of Unity is the most significant form, for it contains a circumference revolving around a fixed center. It is therefore extremely important to understand that all other geometric shapes can be determined from a circle, from which come the full polygons, including series of roots and proportions [1]. Some researchers stated that the use of the circle is a way of expressing the Unity of Islam. According to this doctrine, the circle and its center is the point at which all Islamic patterns begin [6]. Circular plan in Islamic architecture represents one of the most important aspects of life which is unity and perfection. Circle is the symbol of holiness and the only perfect figure able to express God' glory [25]. Squares, pentagons, octagons, decagons and all other polygons can be drawn based on surrounded or inscribed circles. That is why diagrams have been prepared based on circles and squares.

Having examined O Ratio, we turn to M and N Ratios. These two Ratios do not show any special relationship unless M Ratio reveals the fact that height to exterior diameter Ratio has increased to some extent over time. It shows a revolutionary process in the proportions of conical domes.

Conical, polyhedral and pyramidal domes are among distinct features of Iranian domes which play an important role in the development of tomb towers and shrines. In Iranian architecture [26], geometry and proportions provide developments for constructions and designs of conical domes. Through geometrical analysis of case studies, the authors have noticed the value near the √2 Ratio and √3 Ratio for plan's external diameter to internal diameter (O) for most case studies. This Ratio is the most important one since it reveals the form and dimensions of the plan. Diagrams have been presented showing these Ratios by superimposed squares and circles. Circle is the most significant form of these diagrams for its basic geometry. All samples' plans can be designed based on these diagrams.

Finally, it can be concluded that recalling mathematics and proportions to Iranian architecture [27-30] is of great importance and value for a better connection between past and present architecture. A comprehensive understanding of conical domes and their proportions can set the stage for standards which strengthen such a connection.

1Sunni: One of the two main branches of Islam, differing from shia in its acceptance of the first three caliphs.

2Shia: One of the two main branches of Islam, regarding Ali, the fourth caliph, as Muhammad's first true successor.