Copyright: © 2016 Anvesh G, et al. This is an open-access article distributed under the terms of the Creative Commons Attribution License, which permits unrestricted use, distribution, and reproduction in any medium, provided the original author and source are credited.

There is a growing interest and concern regarding Green House Gas (GHG) emissions as these is the major contributors of global warming. Carbon dioxide (CO2) and Methane (CH4) are two main GHGs which get emitted from both natural aquatic and terrestrial ecosystems as well as from anthropogenic activities. In natural aquatic system water storage is an important aspect for meeting the requirements of drinking water, food, and energy. However, development of such water bodies will impact the environment. Recent studies have shown that water bodies play a significant role as the sources of GHG emission, particularly in tropical climatic zones. One possible reason for this is the annual water temperature is much higher in tropical climates. This means that the rate of decomposition is faster leading to higher CO2 and CH4 flux in the water. Indian reservoirs indicate the complete spectrum of different types of reservoir found in the world. Their performance in terms of emission of GHGs is more difficult to trace out. In this paper pathways of GHG emission from a reservoir have been discussed and a tool as suggested by UNESCO/IHA has been used to assess the GHG emission from four existing reservoirs in India. These reservoirs are of different age and are located in different parts and climatic zones of India. Predicted diffusive fluxes in CO2eq have been estimated for the year 2013 as well as over the 100 years of their existence in terms of Tonnes CO2 eq.

The increasing anthropogenic activities have nowadays resulted in increasing concentration of natural gases CO2 and CH4 resulting in GHG effect [1]. According to the European Environment Agency (EEA), CO2 emissions account for the largest share of GHGs equivalent of 80–85% of the emissions. Fossil fuel combustion for transportation and electricity generation are the main sources of CO2 contributing to more than 50% of the emissions [2]. In India generation of electricity with coal based thermal power plant contributing to more than 55% [3], Hydroelectricity and natural gases represent respectively more than 15% and 5% of electric generation capacity. So far hydro power has been consider as the clean source of energy. Nevertheless, for the last few years GHG emission from freshwater reservoirs and their contribution has been a big issue regarding generation of electricity [4].

Recent studies showed that the carbon which is transferred to water body will undergo decomposition under oxic and anoxic conditions and produces CO2 and CH4 [5]. Once CO2 and CH4 are produced, they are not immediately released into the atmosphere, this gases are soluble in the water until a chemical event occurs that causes the gases to be released [6]. In this paper it briefly discusses exactly how reservoirs become a greenhouse gas and the mechanism behind the emission are been pointed out clearly and the predicted emissions of CO2 and CH4 in the form of diffusive flux from Indian reservoirs located in different climatic zones are been assessed using UNESCO/IHA GHG Risk Assessment Tool.

While considering without a reservoir creation over a flowing water bodies only natural emission like conduction, deposition and emission will take place. On creation of a reservoir, emission from different parts of the reservoir will takes place Figure 1 shows detail sources of GHGs emission from the reservoir. The OM (Organic Matter) which present in the soil and plants is imported from the catchment in addition to that OM which preexisting in the reservoir together will decomposes aerobically and anaerobically and emits CO2 and CH4 gases to the atmosphere with the help of some parameters (primary and secondary) [2]. Macrophytes which are present on the surface of water are also responsible for some amount of CH4 emission to the atmosphere. 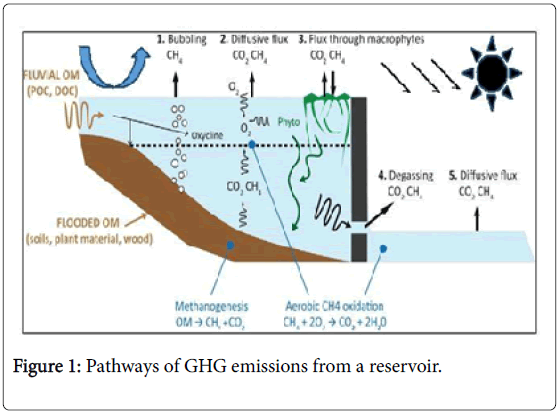 Figure 1: Pathways of GHG emissions from a reservoir.

CO2 and CH4 emissions to the atmosphere from reservoirs include:

• Bubble fluxes (ebullition) from the shallow part of water bodies

• Diffusive fluxes which are emitted from water surface of the reservoir

• Increased diffusive fluxes along the downstream part of the reservoir

Table 1: Types of parameters that effect in the production of CO2 and CH4.

At Air water interface this both CO2 and CH4 will be transferred by diffusion from the aquatic ecosystems. This pathway happens at reservoir upstream and downstream and it is based on the Henry’s law difference of partial pressure of a gas between the air (Pa) and the water (Pw). If Pw is higher than Pa the gas diffuses from the water to the atmosphere because a chemical compound always diffuses from the most concentrated layer to the less concentrated [5]. Several parameters control the intensity of the diffusive fluxes and the level of diffusive flux emissions can be estimated using the UNESCO/IHA Risk Assessment Tool with a confidence interval of 67% from the reservoir by giving the required inputs into the model.

Several alternative formulations were attempted by the UNESCO/IHA GHG emissions from freshwater reservoirs research project the following general expression has been given as the best fitting expressions (equation 3), (equation 4), and (equation 5) which consider the parameters which are responsible for the emission of CO2and CH4 (CCO2, CCH4 in mg/m2*d1) from the reservoir by considering the age of reservoir.

Formula for reservoir aged >32years up to 100 years

Reason for consideration of these parameters is:

• The new long term equilibrium emission (after the initial pulse) is a positive factor of runoff.

• Higher the runoff higher the CO2 emission from the reservoir.

• The steepness of the initial decline (the exponential term) is a negative function of temperature.

• For older reservoirs (>32 years), diffusive CH4 emissions are constant in time at a level which is determined by temperature and precipitation only.

Range of variability of the estimates

The predicted values “lower limit” and the “upper limit” can be estimated as a function of the predicted values of gross GHG fluxes (of CH4 and CO2) and the mean square errors. Table 2 expresses how to estimate the values of the limits of the 67% confidence interval, for the models adopted in GHG Risk Assessment Tool.

Table 2: Limits of predicted values of the 67% confidence interval.

Indian reservoirs indicate the complete spectrum of different types of reservoir found in the world. Some are located in a tropic climate which can release a significant amount of GHG and some in arid environments, where sequestration probably dominates over release of carbon [7]. Between these extremes are reservoirs located in wet, humid or dry tropical environments. Their performance in terms of emission of GHGs is more difficult to trace out. The data of the four Indian reservoirs which are located in different regions shown in the Figure 2 have been collected according to the latitude and longitude basics, the mean annual daily air temperature and Mean annual precipitation from 2 meters above the located surface has been analyzed by collecting the data from 19972013 from NASA Prediction of Worldwide Energy Resource (POWER). Runoff data are obtained from UNH/GRDC composite runoff fields V 1.0. and the analyzed values are shown in the Table 3 [8]. The predicted values of that particular year as well as the expected lower and upper range of CO2 and CH4 with a confidence interval of 67 percent are listed in the Table 4 [9-11]. And mean emissions over reservoir life time (100 years) is shown in the Table 3. 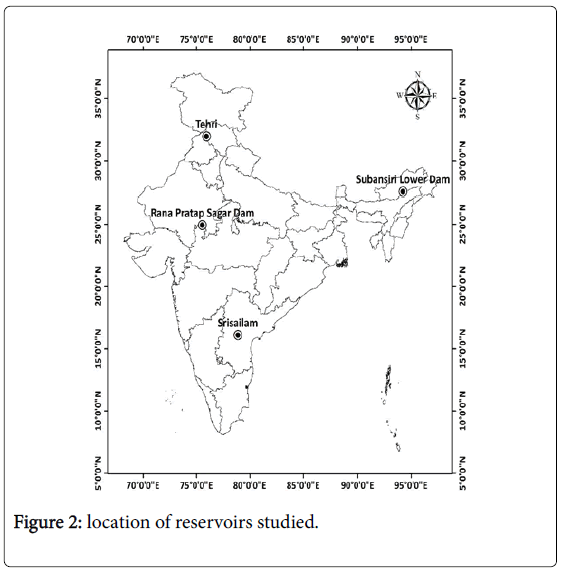 In this case study, four reservoirs from different regions of India have been selected and the emission through diffusive flux has been estimated. According to the study, CH4 emissions are high for all the reservoirs and CO2 emissions are high for Tehri, Subansari and moderate for Srisailam and Rana Prathap Sagar when compared with threshold limits of the model. While considering throughout the life time assessment of the reservoir (100 years), the emission of CH4 is high for all reservoirs except Subansari and CO2 emissions are in a limit and medium except Srisailam (Table 5). Even though these are predicted values, the CH4 emission is high for all the reservoirs and hence mitigation measures must be taken to reduce the emission since GWP of CH4 is 25 times higher than the CO2. Water bodies have the potential to emit large amounts of CO2 and CH4 and contribute to global warming [12]. The decomposition of organic matter is the main reason for the production of these GHGs so we have to control the entrance of OM into water bodies, maybe up to some extent. Another possibility is logging trees before starting the flooding process so that less organic matter is available for decomposition. Due to the fact that the oxidation of CH4 through Methanotrophic bacteria seems to be a key factor to decrease the amount of CH4 released into the atmosphere, this mechanism should be supported somehow to minimize the emissions from water bodies. There is still a need for lot of research to understand all the important processes.