Copyright: © 2015 Abdel-fattah, et al. This is an open-access article distributed under the terms of the Creative Commons Attribution License, which permits unrestricted use, distribution, and reproduction in any medium, provided the original author and source are credited.

Extraction of teeth is common in general practice of dentistry due to tooth decay or periodontal disease. Although the obvious role of recent technology and development of oral health and dental sciences is advanced, the dental extraction has been estimated up to seven teeth per week [1]. Dental alveolitis or Alveolar osteitis (dry socket) is a major complication that followed tooth extraction [2]. Dental alveolitis occurs during blood clotting in extracted socket and leaving bone unprotected and exposed to the oral environment. Accordingly, socket may fill with food and bacteria that leads to advanced decomposition of the blood clot [3]. Patients with dry socket are subjected to pain around the extraction site that latest with 1to3days after the extraction. In addition, socket may be partially or totally devoid of a blood clot and resulted to of halitosis [4]. Recently, traditional and herbal medicines have a great attention to overcome and avoid serious complications such as drug resistance, adverse drug reactions [5]. Tea tree oil is the essential oil obtained from the Australian native Melaleuca alternifolia or tea tree, indigenous to northern New South Wales and southern Queensland. Tea tree oil (TTO) exhibits enormous pharmacological properties such as antioxidant activities, anti-inflammatory properties due to terpen oil components of TTO. Oils are extracted by steam distillation from tea trees [6]. Considering the importance of treatment of dental alveolitis, the current study aims to investigate the healing effect and antimicrobial activity of TTO against dental alveolitis of the postoperative morgal dogs.

The inoculum suspension was prepared from overnight broth culture (Mueller-Hinton) and adjusted to 0.5 McFarland turbidity equivalent (approximately 1.5 x 108 cells/mL). A suspension with 50 µL of inoculum of S. aureus was inoculated for each alveolus, and injected in a well-formed blood clot and left for 3 days until the infection was clinically observed [7]. Figure 1: Photos showed dental socket before teeth removal (left) and after teeth extraction (right) and the empty sockets after extraction.

From the “intra-group comparison” table, it could be noticed that group A revealed an increase in density throughout the study periods in comparison to the baseline period, this increase was insignificant at all-time intervals.

As for groups B and d there was an increase in density throughout the study periods in comparison to the baseline period, this increase was significant at T4 and T6 for both groups.

Finally, upon comparing the results within group C, there was a striking significant increase in density throughout the study periods in comparison to the baseline period (Table 2, Figure 2). 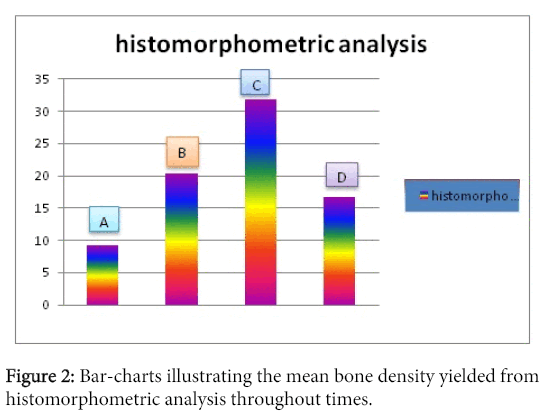 Histological examinations of the current study confirmed the histomorphometric analysis. Animals treated with TTO get and vancomycin after infection showed pronounced bone regeneration and improvement of bone quality among other treatment groups and control itself.

Histological examination after three days treatment showed that dental alveoli were almost entirely filled by a blood clot, which interspersed with granulation and inflammatory cell infiltrate. In addition, tissue necrosis were noticed similarly in all groups.

In the control group, the ordinary form of inflammatory reaction was recognized accompanied with newly formed blood capillaries, vascular dilatation with exaggerated amount of polymorphnuclear leukocytes embedded in loosely arranged granulation tissue (Figure 3A). Similar results were obtained in groups treated with both gel and gel & antibiotic but showed a lesser degree of inflammation intensity and with remarkable degree of necrosis (Figure 3B-3D). The most intense necrotic display associated with the least inflammatory infiltrate was observed in the oil treated group (Figure 4A and 4B). It was difficult at that time to observe the initiation of osteogenesis in all groups. The histological studies of animals after two weeks of daily treatment showed that remaining of blood clotting associated with variable degrees among different groups with highly remarkable in control& oil groups. All the groups presented dental alveoli filled with neoformed bone trabeculae localized mainly on the peripheries of the defected area but the characteristic of bone trabeculae varied.

In the control group, blood clotting showed inflammatory infiltrate with. The peripheral layer of bone lining the alveoli was thin , immature woven bone trabeculae bridging between few side walls , with large marrow spaces in between ,the osteocyte lacunae were plumbed and widened (Figure 5A). Groups treated with either gel alone or in combination with vancomycin showed thicker immature bone trabeculae spanning out through the alveoli (Figure 5B and 5C). The pre-regeneration features observed in the animals treated with TTO only and the woven trabeculae was scattered, ill-defined at the peripheries while the socket itself seemed to be empty (Figure 5D). Control group of animals treated for three weeks showed enhanced maturity in bone trabeculae with a trail for enclosing the defect. The osteocytes showed more mature organization (Figure 6A). Remnants of granulation tissue was still observed, animals treated with TTO gel alone or in combination with vancomycin showed mature lamellar with large marrow spaces with spindle osteocytes arranged in parallel to the marrow spaces surface which complete enclosing only in the latest group (Figure 6B and 6C). The oil treated group showed similar results but with thinner bone trabeculae and wider marrow spaces and the central portion showed connective tissue (C.T) portion without bone differentiation with fewer areas of blood clotting (Figure 6D). Animals treated for 21 days showed the same results of the previous period with significant bone maturation with numerous, thicker and more organization of lamellae with complete closure of marrow spaces. These finding was pronounced in animals treated with TTO gel alone or in combination with vancomycin than animals treated with TTO or infected animals only (Figure 7A and 7B).As regard bone regeneration both of the gel and gel & antibiotic groups, showed the more intense observation, However it was observed that excessive vascular bed was recorded in both of gel and oil group more than that of other groups. The traditional and herbal medicine has been extensively used in treatment of different disorders. The current study seeks to investigate the healing as well as antibacterial effect of local preparation of tee tree oil alone or in combination with vancomycin. The current study showed that tea tree oil exhibited antimicrobial activity. These results is in accordance with previous studies that reported TTO (Melaleuca alternifolia) is a potentially useful topical antimicrobial agent with clinically efficacy [8,9]. Following these recommendations, this oil was chosen as the focus of this research to explore its efficacy and accuracy as an anti-inflammatory and antibacterial agent.

This product was tempting for the researchers performing the current work because it is incorporated as the active ingredient in many topical formulations used to treat cutaneous infections. Moreover, it is widely available over the counter in Australia, Europe, and North America and is marketed as a remedy for various ailments also recently gained a reputation as a natural and effective antiseptic and it has now become a major natural preservative in many pharmaceutical and cosmetic products for external use as reported by Halcón et al. [10] and Carson et al. [11].

The results of the current study showed that gel of TTO exhibited pronounced antibacterial as well as anti-inflammatory activity that indicated with rendering gel in the socket and the attaching time to the infected dental socket was longer than TT oil. The data of the present work showed that gel of TTO enhance the antibacterial activity of vanmcomycin that indicated with augmentation of bacterial eradication in combination with vancomycin in comparison with animals treated with antimicrobial agents only. These results were in agreement with previous work that described the antimicrobial activity of TTO was due to inhibition of bacterial growth of gram gram-positive bacteria such as S. aureus [12].

Kreuger et al. [7] reported that in their in vitro study, concentrations of 300 mg/mL and 500 mg/mL of TTO caused 50% mortality of the human epithelial cells and fibroblasts after 24 - 48 hours of incubation In another study in vitro, the tea tree oil emulsified into culture medium containing 10% fetal calf serum was toxic to monocytes at a concentration of 0.016% v/v and for neutrophils in the same concentration. The high concentration (20%) of neutral gel used in these two experiments could be the reason for the toxicity of the cells. That’s why in this work to avoid the toxic effect of TTO, an equation was used to detect the lethal dose for animals to avoid death of the dogs.

This was in accordance with the work done by Kreuger et al. [7] and Reagan-Shaw et al. [8], Staphylococcus aureus was prepared in the current work to be used for inducing infection in the dog’s sockets. Following its removal from blood agar plates and its insertion in sterile bottle with saline until turbidity appeared, it was inducted into the blood clots formed inside the sockets. This was followed by leaving the animals 3 days to ensure clinical appearance of alveolitis as denoted by inflammation and pus formation. This method of induction of infection is in accordance with the method previously performed and recommended by Kreugeret al. [7].

A control group was allowed to heal normally following teeth extraction without the application of any treatment in this study. It is highly documented that following tooth extraction, a blood clot develops into the socket and finally normally leads to bone formation. Therefore, the purpose of the inclusion of a control group was not to assess the normal healing process of extraction wounds but to investigate whether the use of certain medications in the other three groups would enhance or delay the healing process in comparison to the non-medicated control wounds.

Alveolar healing following tooth extraction has been investigated in humans and in several animal species under normal and experimental conditions that might interfere with the time and course of healing. Most of these studies were qualitative reports limited to histological examination of tissue repair. Few researches in the literature performed quantitative histological measurements to assess bone dynamics of extraction socket healing. For this reason and due to the lack of quantitative data regarding bone formation following tooth extraction, both qualitative and quantitative histological observations and measurements were done in the current work.

From the current study, it could be concluded that gel form of TTO (tea tree oil) is beneficial in treatment of dental alveolitis. These effects were due to the antimicrobial and anti-inflammatory effects with healing properties. There was a histopathological evidence to support the use of tea tree gel with antibiotic in treatment of infected Alveolitis. Within the limitations of the present study, this evidence is not strong enough to stick to tea tree gel with antibiotic. The results of the current study need for further studies to address the mechanism of antimicrobial and anti-inflammatory effects of TTO in treatment of dental disorders and promote the healing after dental extraction.