Importance: A part of instrument used to grasp the foreign body may get fractured during its use and its fatal dislodgement may render the treating physician liable. This case being second such in the literature highlights the factors behind such mishap and due precautions to avoid such risk.

Observations: A prong of a strong/ stout crocodile action forceps fractured during attempts to firmly hold a metallic foreign body prior to its extraction. It slipped in the digestive tract as the airway was secured with cuffed endotracheal tube and subsequently was excreted per via naturalis.

Conclusions and relevance: The contributing factors for failure of metallic instrument can be related to its (1) moderate to severe degree of Impaction and (2) quality of metal used in the instrument: Routine inspection of microsurgical instruments for early detection of metal corrosion and fatigue is desirable while strength of forceps may be tested by its firm grasp / indention on a paraffin wax. An international standard be made for all manufacturers to disclose the speculated time of its safe use or else be made liable for such accident.

Airway tract compromise is the most urgent of all medical and surgical emergencies and needs to be dealt with the topmost priority. Broken therapeutic instruments/appliances reported in the literature as airway-foreign bodies include fractured worn out tracheostomy tube [1] Montgomery tracheal T-tube [2,3] tip of nasopharyngoscope sheath [4] endotracheal intubation stylet sheath [5] parts of bronchoscopy instruments [6] endotracheal suction catheter [7,8] components of respiratory care equipment [9] and nasopharyngeal airway [10] while defective orthodontic appliances [11] and ill-fitting dentures [12] have also been reported in the digestive tract. It is rather unexpected to encounter the breakage of a therapeutic instrument such as a robust/ sturdy metallic forceps during the process of extraction of a foreign body. Such an accident is reported herewith that occurred during a simple aero-digestive tract foreign body removal procedure.

A 3 year old male child admitted with difficulty in swallowing since 8 days was diagnosed to have ingested a coin (Figure 1). Plain radiography revealed the coin at the cricopharyngeal junction. Through esophagoscopy under general anaesthesia the removal of coin was planned. The patient was put under relaxant and the airway was secured with cuffed endotracheal tube. Hypopharyngoscope was introduced and the edge of coin was visualized at the cricopharyngeal junction. A crocodile action foreign body forceps was introduced and the edge was grasped firmly. Soon after the coin was grasped there was a give way feeling as one of the prongs of the forceps broke inside the lumen of the aero-digestive tract. Immediately the original (broken) forceps (Figure 2) was withdrawn and another one was introduced to extract the coin. Although the coin was delivered but some extra force was applied during its extraction probably because it was impacted for 8 days. A moderate amount of bleeding was also encountered possibly owing to surrounding mucositis with superficial mucosal injury. Despite the best efforts the broken prong could not be found with repeated attempts of esophagoscopy and nasopharyngoscopy. Thereafter the endotracheal tube was withdrawn under strict vision to see for the chances of broken prong slipping into the trachea along the endotracheal tube. A nasogastric tube was negotiated and patient shifted in post-operative room where he remained stable. After 4 hours a repeat X-ray of neck, chest and upper abdomen revealed the prong in small intestine (Figure 3). A day after, the broken prong passed out per via naturalis as repeat X-ray of abdomen and pelvis did not reveal its presence. 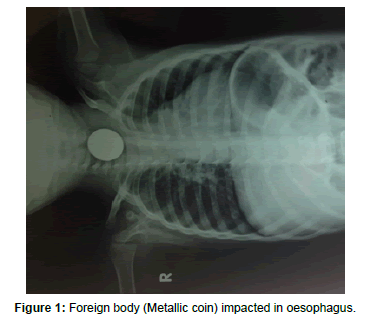 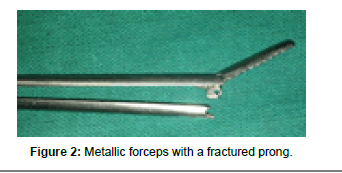 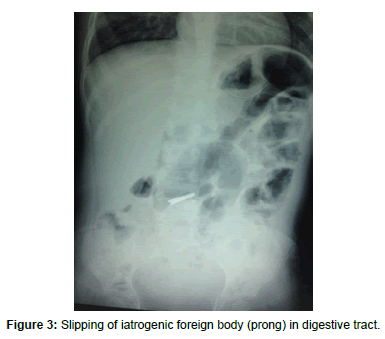 Instrument failure resulting in morbidity is most commonly seen in orthopaedic and obstetrical practice. To the best of our knowledge the intra-operative instrument failure leading to airway foreign body has only been reported twice in the English medical literature [6,13] While Roach et al. had reported plastic instrument-failure, Monteiro and Campisi were the first to report the aspiration of the fractured portion of microsurgical instrument caused by metal failure and corrosion. The chances of breaking/fracturing a forceps-prong inside the lumen of aero-digestive tract during manipulation are very rare. To the best of our knowledge this case happens to be the second such case in the literature and the contributing factors for the mishap in our set up can be related to:

With 8 days of impaction the steel coin would have initiated a foreign body reaction with surrounding mucositis. The onset of bleeding and some extra force needed during disimpaction suggests some degree of impaction. In absence of odynophagia or throat pain at rest the inflammation was more likely to be limited to mucosa and submucosa sparing the muscular/nervous layer. The minimal mucosal laceration seen immediately after extraction as in this case supports its involvement. On the other hand the onset of odynophagia is likely to suggest the muscle/nervous involvement of oesophageal wall (rather than simple lumen obstruction) due to the pressure effect of foreign body, or its inflammatory contribution or even its penetration (if sharp/ pointed edges). Moreover even without pain, simple dysphagia due to blunt inert smooth FB cannot rule out local mucosal inflammation causing impaction specially if it is of subtotal duration. Hence the extraction of smooth foreign body like coin should be undertaken at the earliest to avoid the chances of impaction and further complication

The instrument was in use at our facility for the past 8 years and made of stainless steel. It was not possible to indicate its number of usage but did not show any signs of wear and tear preoperatively. The manufacturer of forceps was ‘international’ compatible to its American counterparts. A possibility of impaction should always be kept in mind and the surgeon should test the integrity of forceps with a little more force before introducing it for in-vivo extraction. This will reveal the strength of forceps-hold and prevent such accidents. A safe preoperative trial of grasping/indenting a paraffin wax piece with the forceps may be tried in every case. Moreover all manufacturers should reveal the quality of material/metal/alloy used and its speculated time of ‘expiry’ in terms of it being worn out or turning fragile enough to break due to corrosion. The majority of such instruments used in the developing world are manufactured locally and hence run a high chance for such an accident. Due consideration be given to defective design and the manufacturer being made liable/penalised for the same.

Following such accidents these broken prongs are likely to be missed in oesophageal mucosal folds even after multiple attempts of esophagoscopy or pushed further down in the stomach. Special care needs to be taken to see for their presence in trachea / airway or in nasopharynx before extraction, otherwise a more sinister airway obstruction would result postoperatively further complicating the picture. Hence as far as possible, the airway should be secured by cuffed endotracheal intubation for even the simplest case of digestivetract- foreign-body. In the present case the broken prong would have dislodged in the airway tract if not secured otherwise.

Lastly a routine inspection of microsurgical instruments for early detection of metal corrosion and fatigue is desirable [13,14] for silver tracheostomy tubes.

Both the authors had full access to all of the data in the study and take responsibility for the integrity of the data and the accuracy of the data analysis No potential conflicts of interest disclosed, including relevant financial interests, activities, relationships, and affiliations.

Copyright: © 2015 Singh S, et al. This is an open-access article distributed under the terms of the Creative Commons Attribution License, which permits unrestricted use, distribution, and reproduction in any medium, provided the original author and source are credited.