3Regional Organization for the Conservation of Environment of the Red Sea and Gulf of Aden “PERSGA”, PO Box: 53662 Jeddah 21583 Saudi Arabia

Copyright: © 2015 OsmanAwaleh M, et al. This is an open-access article distributed under the terms of the Creative Commons Attribution License, which permits unrestricted use, distribution, and reproduction in any medium, provided the original author and source are credited.

Extensive research with the aim of establishing seawater quality monitoring is considered essential of any integrated coastal management program. The present study reports for the first time the republic of Djibouti costal water quality. The state of the sixteen stations’ seawater quality was assessed on the basis of determination of temporal and spatial variability of inorganic nutrients with physicochemical variables. The samples were collected seasonally from different areas such as harbor and important touristic area in the Gulf of Tadjourah for three years (2008, 2009 and 2012). The seawater temperatures, pH or Chlorophyll a of sampling sites were evaluated and compared to those of the Gulf of Tadjourah or Red Sea waters. Relatively high concentrations of nutrients (for some sites) and very low chlorophyll a concentrations (0.006 to 0.06 μg.l-1) were observed at sampling sites. The seawater concentrations of trace metals in ten stations across the Doraleh coast, where is located the main port of Djibouti, were also investigated in 20012 and the values were compared to the normal range of concentrations for seawater. The levels of microbial concentrations were also determined for the main beaches of Djibouti-city and showed relatively higher concentrations for stations beaches close to sewage outfall.

Seawater and beach quality monitoring assessment is considered essential parts of any integrated coastal management program [1]. Extensive research with the aim of establishing guidelines and standards for recreational water quality has been conducted all over the world. In this context, social, cultural, environmental, and economic factors should be taken into consideration because of the great variation from one area to another [2]. The republic of Djibouti (Horn of Africa), with a coastal length of about 372 Km lies between 10-13°N and 41-44°E. About 58% of the population of the Republic of Djibouti, which has been estimated at about 800000 inhabitants, lives in the capital city of Djibouti [3]. In Djibouti-city, untreated waste waters were directly discharged into the coastline. This situation is of great concern for the coastal environment as well as for the health of the people. Djibouti coastline is experiencing a rapid increase of coastal utilization for several purposes such as recreation and refreshment, fishing or industrial development. This makes coastal water quality and proper environmental management highly pressing. At present very little information is available on the state of the water quality of Djibouti coastline. Realizing the importance of this information for tourism development and consequently on the national economy, the Government of Djibouti in collaboration with the Regional Organization for Conservation of the Environment of the Red Sea and Gulf of Aden (PERSGA) promoted the initiation of a sustainable monitoring program of the coastal and marine environment, aiming at establishing a national database that serves the Republic of Djibouti and feeds in a regional database of the Red Sea and Gulf of Aden. A database will help significantly in the scientifically based management of the coastal region. The aims of this work are to investigate the spatial and temporal pattern of the water quality along the Djibouti coasts and thus provide a basic profile of seawater characteristics on the coasts of Djibouti. The area under investigation includes industrial effluent sites, recreational resorts, urban agglomeration, fishing ports, shipping and industrial activities area as well as coastal site away from development and a reference point five Kilometers offshore.

The sampling campaigns were conducted at 26 selected sampling sites for the investigations of seawater in Djibouti shoreline area (Table 1 and Figure 1). Sixteen sites were positioned along the Djibouti coasts and were selected on the basis of human activity, such as recreation, on the coast. Seawater for inorganic nutrients (nitrate, nitrite, phosphate, and silicate in μM) analyses was collected from these locations during summer (August) and winter (December) in three years (2008, 2009 and 2012). Ten sampling sites were located in Doraleh Port (Figure 1) and were selected due to specific activities take place. All containers used to collect and store seawater were soaked in 10% HCl for 24 hours and washed with deionized distilled water prior to using to prevent contamination. All containers used to collect and process the samples were rinsed at least three times with water samples prior to their collection. Water samples for the determination of nutrients and chlorophyll a were taken in polyethylene containers and kept on an ice box during the transportation. Upon return to the laboratory, the samples were filtered through Nylon Millipore membrane filters (0.45 μm). The Nylon filters were used for the determination of chlorophyll a and the filtrate for nutriments analysis. For heavy metal analysis, water samples were acidified to pH2 using concentrated HNO3 immediately after collection, and stored at 4°C until analysis.

Seawater samples for Fecal Coliform(FC) and fecal streptococci (FS) analyses were collected with sterile 500 mL bottles, which was then kept in the dark and on ice during its transfer to the laboratory, and analyzed within 4 h of sample collection. An appropriate volume of a seawater sample (100 mL) was filtered through a 0.45-mm membrane filter. The membrane filters were aseptically removed and placed in the center of a pre labeled Deoxycholate Agar culture plate for the analysis of Total Fecalcoliform and Fecal coliform, which were then sealed and incubated for 24 hours at 44.5 ± 2°C and at 37.1 ± 1°C, respectively. Three to five colonies from each plate were picked and biochemical tests were performed to confirm the identity [6]. Fecal streptococci (FS) were analyzed similarly to fecal coliforms, however, the membrane filters were transferred to Baird Parker medium which was then sealed and incubated at 37.1 ± 1C for 24 hours. API 20E was used to confirm FC identity, gram stain, catalase, and bile esculin tests were used to confirm FS. From each sample lot representative colonies of S. aureus were chosen and subjected to the coagulase test. For Salmonella and Shigella analyses, 1 L of seawater sample was filtered through a 0.45-mm membrane filter. The membrane filter was placed at 37°C in Hecktoen enrichment medium for 24 hours. Subcultures were made to xylose lysine dextrose agar (XLD) and Salmonella Shigella agar (SSA) plates (Oxoid).

Table 2: Physical and chemical parameters of the Doraleh coastline seawaters. 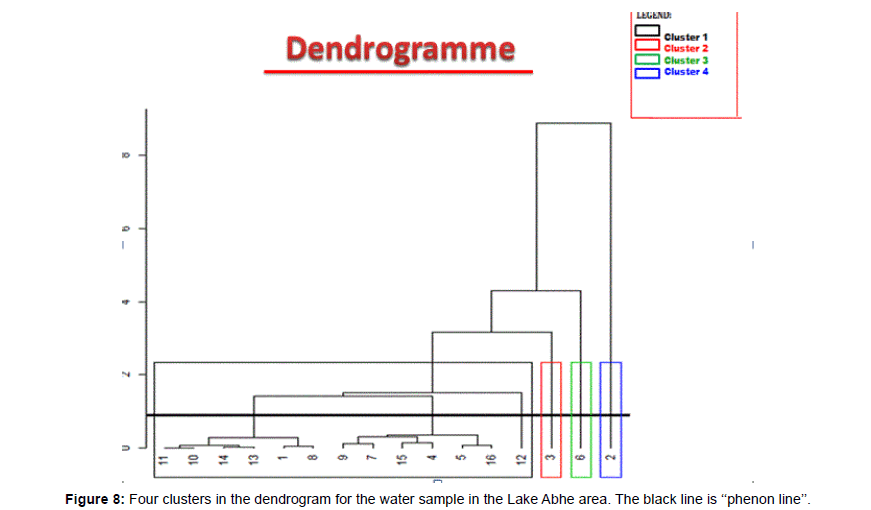 Figure 8: Four clusters in the dendrogram for the water sample in the Lake Abhe area. The black line is ‘‘phenon line’’. 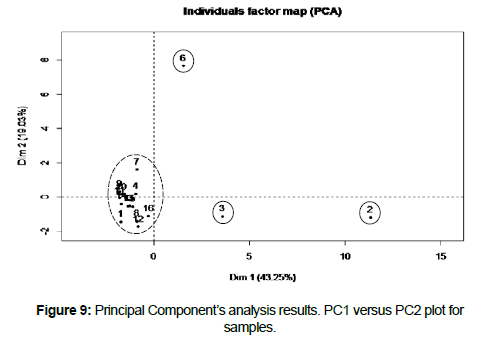 Paired t tests were used to detect significant variations among parameters in the different four cluster locations (Cluster 1, Cluster 2, Cluster 3, and Cluster 4). Pearson correlation was used to detect linear correlation between the four cluster locations. Table 5 summarizes the paired t test results and the Pearson correlations of pH, NO2, PO4, SiO2, and Chl a in seawater samples. The results indicated no significant difference in the parameters measured at all locations (Table 5). These results may be explained by the fact that the available data is not sufficient to be much more interpreted by means of statistical analyses. Therefore, the Djibouti seawater should be at least monitored fortnightly at each sampling site so as to have sufficient data for future statistical analyses.

Table 5: Paired t test and the Pearson correlation results for pH, nitrite, phosphate, silicate, and Chlorophyl a in seawater samples.

The present study documents the first results on inorganic nutriments (NH4, PO4, SiO2, NO2), microbiology (TC, FC, FS, Salmonella, Shigella), and heavy metals (Cd, Co, Cr, Cu, Fe, Mn, Ni, Pb, Zn) concentrations in Djibouti marine and coastal environment. The Gulf of Tadjourah seawater features very low chlorophyll a concentrations. In order to get deeper understanding of this particular low chlorophyll a, three stations monitoring daily the temperature, salinity, dissolved oxygen andchlorophyll a have been set up in the Gulf of Tadjourah in the end of 2014 and the results of this monitoring will be further reported. The results of the present study demonstrate that higher microbial concentrations in seawater were associated with wastewater discharge. Beaches located near wastewater outfalls failed to comply with the European Community Bathing Water Directive, while beaches far from the point source were in good compliance. This study highlights the importance of wastewater treatment before discharging in the sea for reducing the risk of anthropogenic pollution in the Djibouti-city beaches. A more effective management practice would be treatingwastewater and reusing the treated water as Djibouti suffers from scarcity of fresh water resources. Preventing wastewater discharge to the sea will also reduce the risks associated with microbial contamination on seafood and on bather health directly. The heavy metals concentrations in Doraleh coastline seawater were within the normal range for seawater except for iron, which is slightly high and only for the sampling points located in the vicinity of the Doraleh port. Thus, establishing a regular monitoring of the aquatic system should be helpful in setting standards for regulating discharge in the sea. Noteworthy is that Djibouti is blessed with blooming development that needs to be rationally managed to avoid adverse impacts and secure sustainability and profitability for the investors and for the country.

This research was support by the Centre d’Etudes et de Recherche de Djibouti (CERD). We are very thankful to Djibouti Ministry of Housing, Urban Planning and Environment for coordinating with PERSGA to support Djibouti National Monitoring Program. We highly appreciated the collaboration of the Djibouti Navy during this monitoring.