Ari A Shemesh and Pablo Yagupsky*

Copyright: © 2013 Shemesh AA, et al. This is an open-access article distributed under the terms of the Creative Commons Attribution License, which permits unrestricted use, distribution, and reproduction in any medium, provided the original author and source are credited.

The southern region of Israel is populated by a mostly urban Jewish majority (population: 385,200 inhabitants) and a large seminomadic Bedouin minority (population: 188,900) who maintains herds of sheep and goats.

A retrospective study was conducted to assess the impact of the 1997 decision to discontinue a veterinarian control campaign on the epidemiology of human brucellosis in the region.

Brucellosis is highly endemic among domesticated animals in Middle East countries and cause significant human morbidity in the region [1]. In Israel, implementation of an infection control policy based on active surveillance, vaccination of female calves with Brucella abortus strain S19 and slaughter of infected animals, coupled with and economic compensation to farmers, resulted in eradication of B. abortus in beef cattle in 1984 and in dairy cattle in 1985 [2]. However, brucellosis caused by B. melitensis remained endemic in herds of sheep and goats and continued to cause infections among the seminomadic Bedouin population of the Negev desert region of southern Israel [3]. Starting on 1993, a veterinary campaign aimed to eradicating the disease among small ruminants and consisting of a “test and slaughter” policy supplemented with administration of the B. melitensis Rev.1 strain vaccine to all ewe-lambs and female kid-goats was implemented countrywide [2]. Throughout the campaign, more than 40,000 animals were slaughtered and 72% of the flocks were declared free of disease [2]. It was hoped that the incidence of human brucellosis would decrease in parallel with the reduction of disease prevalence in animals, but this expectation was not met and the incidence rate among the Bedouin inhabitants of the Negev region remained high [4]. In 1997, it was decided to terminate the brucellosis control campaign altogether due to the apparent lack of success and insufficient financial resources available for a continued slaughter against compensation policy [2]. Unexpectedly, the incidence of human disease dropped in the years following the discontinuation of the campaign, and in 2004 the reported annual incidence of human brucellosis in Israel was 0.9 per 100,000 populations only [5].

Because no accurate data on the incidence of human brucellosis in the Negev region after the cessation of the veterinarian control campaign are available, a retrospective study was conducted to investigate the epidemiology of human Brucella infections in southern Israel in recent years.

Cases of human brucellosis detected in southern Israel between 2002 and 2013 by either a positive culture and/or a standard agglutination test titer ≥ 1:160 were identified, and demographic data were extracted. Population data for the relevant period were obtained from the Israel Central Bureau of Statistics annual reports.

The Negev desert region of southern Israel comprises 60% of the country’s landmass and is populated by two ethnic groups living sideby- side: a Jewish majority (population 385,200, 2010 data), mostly urban and resembling other Western world populations, and a large Arab Bedouin minority (population 188,900, 2009 data) in transition from seminomadic conditions to permanent residency, that still maintains herds of sheep, goats, and camels.

The entire population of the Negev is covered by a comprehensive national health insurance system and served by a vast net of community health clinics. Inpatient services are provided by a single hospital (Soroka University Medical Center, SUMC), located in the city of Beer- Sheva. Blood cultures and serologic tests for diagnosis of brucellosis are also performed at the clinical microbiology laboratory of the SUMC (CML-SUMC), as well as in a few smaller laboratories. It is estimated that the CML-SUMC provides diagnostic testing for brucellosis to 90% of the Bedouin population and to 60% of the Jewish population [6].

Blood cultures were obtained at the emergency Department and inpatients’ wards of the SUMC using the Bactec 9240 system (Becton Dickinson, Cockeysville, MD). Inoculated blood culture vials were incubated following the manufacturer’s recommendations and negative vials were discarded after 7 days without further processing because it was demonstrated that prolonged incubation (up to 4 weeks) and blind subculture of negative vials only resulted in a marginal improvement in the detection rate of brucellae [7].

Isolated organisms were identified according to accepted microbiological procedures. Brucellae were presumptively identified on the basis of a typical Gram’s stain appearance (small gram-negative coccobacilli), γ-hemolysis, positive oxidase, catalase, and urease reactions, negative fermentation of sugars, and lack of motility, and confirmed by a positive agglutination reaction with specific antiserum (Welcome Diagnostics, UK). Speciation was performed at the Kimron Veterinary Institute at Bet Dagan, Israel, with phages Tb and Iz [8].

Sera were screened for Brucella antibodies by the Rose-Bengal test [9]. Positive specimens were serially diluted up to 1:1,280 to eliminate the prozone effect, and tested by the standard agglutination test (SAT) [10,11]. A SAT titer ≥ 1:160 was considered diagnostic of the disease. Although a cutoff of ≥ 1:320 has been recommended for the serologic diagnosis of the disease in endemic areas [11], we have recently shown that use of this stringent criterion would have missed 17.4% of Negev patients with B. melitensis bacteremia [12].

The computerized records of the CML-SUMC were reviewed and all patients in whom the diagnosis of brucellosis was made on the bases of a positive isolation and/or a positive serological test in the 11-year period 2002-2012 were identified. Because the clinical course of the disease may be characterized by clinical relapses, to avoid that the same episode of contagion would be repeatedly represented in the dataset, a patient was computed again only if he or she met the case definition on occasions separated by>365 days.

To calculate incidence rates, data on the population sizes of the two ethnic communities (Jews and Bedouins) for the study period were extracted from the relevant annual reports of the Israel Central Bureau of Statistics. The 95% confidence intervals of the observed/expected ratio for each year of the study period were calculated, assuming a Poisson distribution [13]. The incidence rates for 1997 (the last year of the control campaign), for which precise data were available and previously calculated using the same case definition and case search method [4], were used as reference (23.3 per 100,000 Negev population and 87.9 per 100,000 Bedouin inhabitants). When the 95% confidence intervals for a given rate did not include the unity, the observed incidence rate for that particular year was considered to significantly differ from the expected value.

The study was approved by the Ethical Research Committee of the Soroka University Medical Center (authorization number 10605). 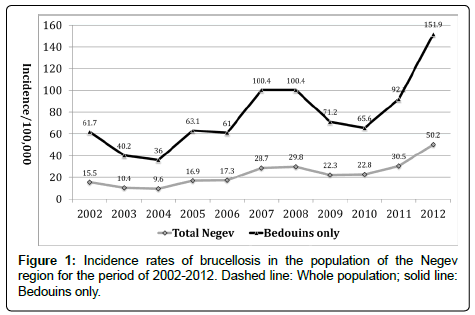 Figure 1: Incidence rates of brucellosis in the population of the Negev region for the period of 2002-2012. Dashed line: Whole population; solid line: Bedouins only.

Table 1: Fluctuations in the incidence of human brucellosis in the Negev region between 2002 and 2012 compared to the 1997 data. CI: confidence intervals.

Brucellosis appears to have been endemic to Middle East countries since ancient times affecting domesticated animals and humans as well [1]. In modern times, rigorous control measures instituted by the Israel Ministry of Agriculture have eliminated brucellosis caused by B. abortus among bovines, making the industrialized milk product supply safe [2]. Brucella melitensis, however, continued to be endemic among sheep and goats, especially in nomadic Bedouin herds, and the veterinarian control of the disease in this setting encountered serious logistic difficulties such as geographical dispersion of small herds, lack of shepherds’ incentive to participate in the program, budgetary constraints, and illegal trade in infected animals [2]. Although cessation of the eradication campaign in 1997 could have been justified by the steady decline in the endemic level of brucellosis observed countrywide, the present data clearly show that the disease was far from being brought to control in southern Israel. The results of the study demonstrate that, after a decline in the incidence of brucellosis in the early 2000’s, starting on 2007 rates increased again, and significantly exceeded the 1997 endemic level in 2012.

The relationship between the timing of the cessation of the veterinarian control campaign and the epidemiological changes in the incidence of human disease in the Negev region is, therefore, not obvious. It is speculated that control measures did, in fact, decreased the prevalence of the zoonosis among domesticated animals because most infected sheep and goats were slaughtered and replaced by immunized animals, reducing the source of human contagion. Although the campaign was discontinued in 1997, its effect was still felt at the beginning of the following decade resulting in low attack rate of human infections. It is speculated that because the disease was not completely eradicated, brucellosis slowly built-up among animal herds, taking a few years before it spilled-over to the human population of the region.

Close examination of the data demonstrate that the disease remained almost limited to Negev Bedouins who, although are undergoing a rapid process of modernization and settlement in permanent towns, still keep goat and sheep herds and consume unpasteurized dairy products. The average incidence of brucellosis in the Bedouin community for the 11-year period (77.9 per 100,000 population) is appalling and ranks second only to that reported among the population of neighboring Syria [5]. These results indicate that countrywide data may overlook the incidence of a locally-endemic infection by diluting cases of disease amidst a large global denominator, and imply that the true magnitude of the problem should be assessed using specific data for the relevant population at risk.

The incidence rate of human brucellosis found in the present study can be considered only a minimal estimate. The study design did not include a small proportion of patients who could have been diagnosed in a few small clinical microbiology laboratories other than the CMLSUNC. In addition, the protean clinical manifestations of human brucellosis may mimic other infectious and non-infectious conditions and, therefore, the true nature of the symptoms and signs may be easily missed. In a previous study conducted in southern Israel, isolation of B. melitensis was frequently an unexpected finding in febrile Bedouin patients in whom the disease was not suspected [14]. In a study by Abramson et al. [15] conducted in the region, active search for the disease among relatives of 4 index patients with brucellosis resulted in the detection of additional 12 undiagnosed cases. A similar experience was reported in Saudi Arabia, where screening of 404 family members of 55 diagnosed cases revealed additional 53 (13.1%) serologically positive individuals, of which 9 were also bacteremic [16].

Human brucellosis caused by B. melitensis has reemerged as a serious public health threat to the Bedouin population of southern Israel in recent years. The Israel Ministry of Agriculture should reconsider its premature decision to terminate veterinarian measures aimed to control brucellosis in domesticated animals, and implement a public education campaign to reduce human exposure to this preventable zoonotic disease.