Injury of the Artery Epigastrica Low after Channeling of Vascular Accesses

Copyright: © 2016 López-Garcia I, et al. This is an open-access article distributed under the terms of the Creative Commons Attribution License, which permits unrestricted use, distribution, and reproduction in any medium, provided the original author and source are credited.

Channelling femoral vascular access (arterial and venous) is a common technique in our daily practice. These techniques are not without complications, which may go unnoticed initially and as in the case presented manifests with symptoms of hypovolemic shock in previously stable patient. One of these complications is injury to the inferior epigastric artery is rare but must be suspected in a patient with a history of femoral vascular access channel that begins with symptoms of hypovolemia. It is crucial to perform appropriate diagnostic techniques (CT angiography and arteriography) and urgent treatment (therapeutic arteriography) as its diagnosis and treatment may be critical in the patient's prognosis.

The channeling of vascular access is a common technique in emergencies. The femoral artery is the most used in emergencies and complications are active bleeding, arterial thrombosis and local hematoma. The etiology of inferior epigastric artery is iatrogenic injury in 45% of cases.

In these two images is objectively inferior epigastric artery injury after trying to channel a femoral approach. In the first after urgent cardiac catheterization, with femoral access, hypotension and drop box hemoglobin evidence. In extraperitoneal pelvic angiography objectifies collection of blood originating from the inferior epigastric artery. Embolization of this artery is performed after active bleeding evidenced urgent arteriography (Figure 1). 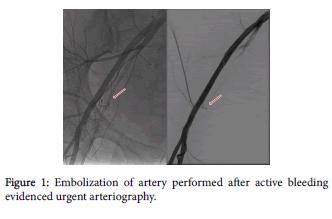 The second patient emergency admission, after trying to channel a femoral approach suffers sudden hypotension box. In a previous emergency angiography hematoma (Figure 2) objective, it is confirmed by arteriography extravasation of contrast of the inferior epigastric artery being treated with areas of micro-embolization.