Copyright: © 2016 Sabbah M, et al. This is an open-access article distributed under the terms of the Creative Commons Attribution License, which permits unrestricted use, distribution, and reproduction in any medium, provided the original author and source are credited.

Micro- and nano-particle charge is one of the main factors determining the physical stability of both emulsions and suspensions and can be quantified by measuring their so called “zeta potential”. When all the particles have a large either negative or positive zeta potential value, they will repel each other and, as a consequence, the suspension becomes stable. By contrast, whether the zeta potential is close to 0 mV, the tendency for flocculation increases. Zeta potential is, however, a feature of the particle in its environment and not of the particle itself. In fact, its net charge in solution affects the ion distribution surrounding the particle, thus resulting in an increase in the concentration of counter-ions. The region over which this influence extends is called “electrical double layer” (EDL) and EDL splits into two regions (Figure 1). In the first, called “stern layer”, the ions are of opposite charge with respect to the particles and, being strongly bound to them, move with them. The second layer, conversely, is a “diffuse layer” where the ions are less strongly attached and, inside it, there is a boundary line between the ions moving with the particles and the not moving ones. This region, called “slipping plane”, is known as the surface of hydrodynamic shear and the potential existing in the slipping plane is called zeta potential [1]. 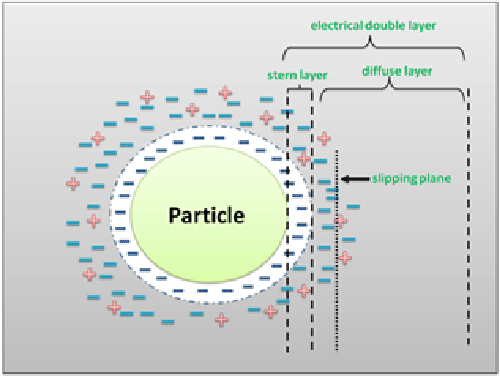 Electrophoresis is the most widely used technique for measuring zeta potential. By directly analysing the electrophoretic mobility of a particle, the zeta potential may then be determined using the “Henry equation”:

Zeta potential is attracting an increasing interest for the characterization of electrochemical surface properties of both microand nano-particles being a key parameter for a number of applications, including characterization of biomedical polymers, electrokinetic transport of particles or blood cells, biocompatibility tests for pharmaceuticals and medical devices, membrane separation, protein purification, mineral processing, water treatment, characterization of clothing material properties in the textile industry [2,3].

The use of biodegradable and/or edible films was proposed in the late sixties, originally to extend the shelf life of various fresh, frozen and manufactured food items and to improve their quality [4]. Many biomacromolecules including proteins and carbohydrates have been thus far used, blended or not, as edible films and coatings [4-7]. Proteinand polysaccharide-based films show good tensile features, whereas lipid-based films have proved to be good water vapour barriers [8-10]. The formation of biopolymer supra-molecular structures induced by electrostatic interactions is related to the nature of raw materials, as well as to other factors such as concentration of the components, their mix ratio, pH, temperature and ionic strength [11-13]. In addition, Porta et al. [14,15] studied the effect of transglutaminase (TGase), an enzyme able to form protein inter- and/or intra-molecular crosslinks, on the mechanical and barrier properties of protein-based films showing that the enzyme is a very useful tool to produce innovative bio-plastics from renewable biomass sources. Giosafatto et al. [16] characterized citrus pectin (PEC) edible films containing TGase-modified phaseolin, and reported that the mechanical, as well as barrier properties to CO2, O2 and water vapor of the latter were comparable to the ones of commercial plastics. More recently, Porta et al. [17] investigated the microstructure and some features of bitter vetch (Vicia ervilia, BV) seed protein films reinforced by microbial TGase. BV, an annual grain legume crop thus far widely cultivated only for forage because of its high nutritional value, shows several favourable characteristics, such as having high yields and being a cheap and abundant protein source [18,19]. Arabestani et al. [20] found that the very low gas permeability, in addition to good mechanical properties, of BV protein films prepared in the presence of the enzyme conferred to these new bio-materials potential practical applications not only as edible coatings in food packaging but also as biodegradable containers.

On the other hand, polysaccharides as starch, alginate, cellulose, chitosan, carrageenan, PEC, or their derivatives, impart hardness, crispness, compactness, thickening quality, viscosity, adhesiveness, and gel forming ability to a variety of films. These films, because of the make up of the polymer chains, exhibit excellent gas permeability properties, resulting in desirable modified atmospheres that enhance the shelf life of the products without creating anaerobic conditions [21]. Additionally, polysaccharide films and coatings can be used to extend the shelf life of muscle foods by preventing dehydration, oxidative rancidity and surface browning, even though their hydrophilic nature makes them poor barriers for water vapour [22].

Among the different polysaccharides, PEC appears to be suitable for low moisture foods [21]. PEC, mainly extracted from citrus peel and apple pomace, is a heterogeneous group of acidic macromolecules well known for their long and safe use in the food industry as a thickening and stabilizer agents. Because of its gelling characteristics, bio-adhesivity, biocompatibility and non-toxicity properties, PEC is also a promising biopolymer as a drug delivery vehicle. In fact, it has been used in mucoadhesive systems to increase the retention time of the dosage form in the gastrointestinal tract, thus enhancing drug absorption after its oral administration [23,24]. The ability of PEC to adhere to mucous membranes seems to be dependent on the different type of polysaccharide employed [25,26]. In particular, the degree of esterification or amidation of the galacturonic acid residues inside the macromolecule is often used to characterize PEC and describes the different properties of the various PEC preparations [27].

All the above literature indicates that the variations of the film physical properties are closely related to polyelectrolyte nature of the biopolymer component(s) and to their capacity to influence the microstructural network by their ionisable groups. The charge on the polymer chains is related to pH and ionic strength of the solution and could affect the polyelectrolyte aggregation with formation of nano-complexes. Therefore, a careful analysis of this relationships needs experimental details that may be provided by zeta potential measurements carried out on the film forming (FF) mixtures used to prepare the differently tailored biodegradable/edible films. Moreover, the analysis of the various factors able to influence the zeta potential value of each FF solution/suspension could be useful to render “stable” the latter. It is worthy to note that the mixing of the different components of a specific FF solution/suspension -as well as the pH, the ionic strength, the polyelectrolyte ratio, or even the method of adding of each component and the speed of mixing- may markedly influence the zeta potential and the size of the obtained micro- or nano-complexes.

To this aim, the zeta potential of FF solutions of pure polysaccharide (PEC) and protein (phaseolin), as well as of a protein mixture (BV seed protein concentrate, BVPC), was measured at different pH values by titration from pH 8.0 to pH 2.0 using the Zetasizer nano-ZSP (Malvern, Worcestershire, UK). The results reported in Table 1 showed that PEC negative zeta potential progressively decreased from -37.50 mV, recorded at pH 8.0, to -6.84 mV recorded at pH 2.0, indicating that PEC FF solution starts to move from a stable to a more unstable form at about pH 5.0. Nguyen et al. [28] found that the adsorption of PEC onto positive liposomes yielded a reproducible increase in particle size and a shift of the zeta potential from positive to negative side, whereas PEC adsorption onto negative liposomes did not render any significant changes probably due to electrostatic repulsion. Furthermore, zeta potential is commonly used also to investigate protein solution/ suspension stability [29]. Yin et al. [30] recently studied the surface charge and conformational properties of phaseolin, the major globulin occurring in red kidney beans (Phaseolus vulgaris L) [31], and reported that the zeta potential of phaseolin, measured in the absence of NaCl, increased from -44.0 mV at pH 9.4 to 27.9 mV at pH 3.0, the protein isoelectric point occurring at pH 4.2. In addition, zeta potential decrease was observed by increasing NaCl concentration from 0 to 200 mM at pH below the isoelectric point. Table 1 summarizes the results of our recent experiments concerning the changes in the zeta potential values of phaseolin when the protein was dissolved in 125 mM NaCl at 25°C as a function of pH. Also in this case the zeta potential was observed to increase (from -13.80 mV at pH 8.0 to 3.48 mV at pH 2.0). Finally, Table 1 reports also the changes in the zeta potential values measured with the mixture of proteins extracted from BV seeds. The detected zeta potential of BVPC was found to increase from -17.00 mV at pH 8.0 to 23.50 mV at pH 2.0, indicating that the electrostatic repulsion pattern may be gradually modified as a result of the gradual deprotonation of carboxyl groups and protonation of the amino groups of each BV protein composing the mixture. Further preliminary experiments (unpublished data) allowed to correlate film mechanical properties with the increase of the negative zeta potential of BV protein/PEC nano-complexes occurring in the FF solution. Our findings are in agreement with previous studies [32,33] explaining the observed increase of flexibility of both polysaccharide/essential oil and whey protein/gelatin composite films by the influence of the nanoemulsion/ solution electrical charge. In this respect, it was suggested that the repulsive forces among macromolecules of the same charge could increase the distance between the polymer chains and, consequently, determine a plasticizing effect in the case of charged polymeric film structures.

In conclusion, zeta potential measurement is proposed as an useful tool for assessing biopolymer interactions in each specific FF solution/ suspension, before casting, during the preparation of bio-based edible films. When zeta potential value results either less negative than -10mV or lower than 10mV, the particle solution/suspension is extremely unstable and, in turn, the physical properties of the derived edible film would be hard to tailor for specific applications.