Copyright: © 2016 Shankhdhar LK, et al. This is an open-access article distributed under the terms of the Creative Commons Attribution License, which permits unrestricted use, distribution, and reproduction in any medium, provided the original author and source are credited.

Majority of non-traumatic lower limb amputations are related to diabetes. In most cases a plantar ulcer precedes which follows a callus formation. Callus formation accompanies neuropathy. Callus is known to known to increase local pressure and this is ulcerogenic. Most important aspect of management of a DFU is offloading which intends to reduce pressure of the body from the ulcer region. Many methods of offloading are available which are costly, time consuming and often need an expert technician to apply. We at LK Diabetes centre devised a method of offloading which is instant, most economical and needs no special training. It is called the “Samadhan System of Offloading”.

Offloading is the most ignored aspect of diabetic foot care, especially in developing world. Besides non affordability of the suffering lot, poor health related infrastructure and ignorance of healthcare providers should be blamed more than the non-availability of offloading measures. While rendering care to patients with diabetic foot ulcers, we were on lookout for some affordable, effective and easy to operate method of offloading which we found in Samadhan System, an offloading device researched and developed in our own diabetes clinic, named the LK Diabetes Centre.

Eighty five percent lower extremity amputations (LEAs) are preceded by an ulcer and most are preventable [1,2]. Neuropathic diabetic foot ulcers (DFUs) are mostly responsible for LEAs [3]. Lifetime risk of DFUs in a patient of diabetes remains up to 25%. After a major amputation, 50% of patient will have their other limb amputated within 2 years [4]. As far as mortality is concerned, when compared to Cancer, it is second only to lung cancer (86%), Colorectal cancer (39%), Breast cancer (23%), Hodgkin's disease (18%), Prostate cancer (8%) [5,6].

While one is standing, each foot bears 50% of body weight. During walking there are times when one foot bears even one and a half times of body weight which is further increased if any deformity or obesity were associated [7].

The thick and callused edges of a wound have a tendency to roll inwards and inhibit the growth towards the centre, making a wound non healing [8]. Repeated sheer stress is known to cause callus which ends up in a diabetic foot ulcer [9]. Callus formation precedes ulcer formation in 82% of patients with DFU [10,11]. Callus can increase the local foot pressure by as much as 30% [12].

Diabetes patients are prone to a non-enzymatic glycation of their soft tissues that can, in turn, lead to tightening of the periarticular structures around the joints [13]. This is called limited joint mobility (LJM). More than 66% of patients with diabetes of more than 5 years have some degree of LJM. DFUs were noted in 65% of those with Preipheral Neuropathy and LJM compared to only 5% in those with PN without LJM [14].

Since callused edges have a tendency to roll inwards, this retards centrewards healing, hence debriding the hyperkeratotic and callused wound edge is the first step of offloading. Short shuffling Gait offers yet another simple means of offloading the foot; specially for forefoot [15-17].

Prevention of DFUs can be achieved by educating patients, their relatives and family physicians. When preventive measures fail, appropriate treatment should be started early. Healing of these ulcers requires proper dressing of the ulcer(s), restoration of adequate vascularity, control of infection, metabolic control including glycemia and lipids and offloading of the ulcerated area but offloading remains the most important of all. Offloading is defined as any measure to eliminate abnormal pressure points to promote healing or prevent recurrence of DFUs [13].

The aim of offloading is to redistribute plantar pressures evenly, thus avoiding areas of high pressure that will prevent or delay healing. Total offloading is impractical and difficult to achieve. Many methods of offloading are available currently but Total Contact Casting (TCC) is known to be the gold standard of offloading. TCC was first described by Milroy Paul TCC became popular when Dr. Paul Brand used frequently at the Hansen's disease Center in Carville, Louisiana [19]. TCCs have been shown to reduce pressure at the site of ulceration by 84-92% [20].

TCC reduces plantar pressure by increasing weight bearing surface. TCC has several advantages such as forced compliance to offloading, protecting foot from infection and reduction of edema. Disadvantages with TCC include unaffordable cost since it has to be changed every week or so and even more frequently if associated with oedema, needing specially trained technicians to apply and remove it; thus TCC application as well as removal is quite time consuming. With TCC monitoring of the wound can not be done. TCC poses difficulty in sleeping, bathing and driving as also affects gait stability [21].

TCC may cause some complications too such as iaterogenic ulcerations, muscle wasting, osteopenia and leg length disparity. It is contra indicated in ischaemic and infected wounds [22]. Because of so many reasons TCC is used currently by lesser than 2% physicians in US [23].

Removable Cast Walkers (RCWs) offer many advantages and have virtually replaced TCC. They are much cheaper than TCC, carry comparable efficacy, need no trained technicians to apply or remove, are least time consuming, local wound care and monitoring is possible, can be used in infected and ischemic wounds also and many life activities such as sleeping, bathing and driving can be enjoyed. Nonadherence remains the greatest disadvantage of RCW. Instant TCC (i- TCC) renders RCW irremovable and offers forced compliance. In this method a few wraps of plaster cast or fiber cast bandages are wrapped after applying RCW. i-TCC has comparable efficacy (80% i-TCC vs. 74% TCC at 12 weeks).

Besides TCC and RCW, there are variety of therapeutic foot wears. Most offloading devices are either not available or unaffordable by patients of developing world, including India.

The team of physicians at LK Diabetes Centre, Lucknow, India, has researched and developed an altogether new offloading device, called the “Samadhan System”, which is very affordable, costing barely 1 USD and has both removable (SS-R) and irremovable versions (SS-IR).

All other offloading devices take some time before they are placed but Samadhan System can be placed immediately; hence is an “Instant Offloading Method”. 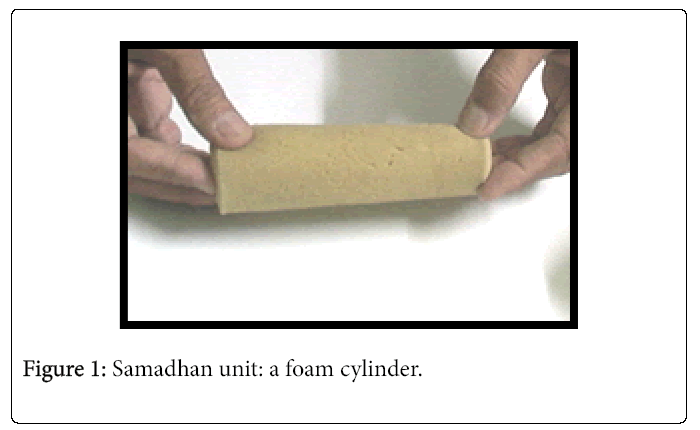 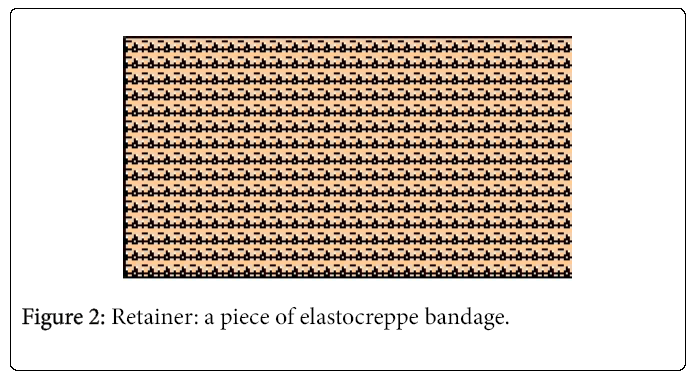 It is very simple to manufacture and we recommend that healthcare providers can have a Samadhan manufacturing Unit in their own clinic, which might be called “Samadhan Lab”. It needs only a small space to accommodate a small table with a shelf to keep raw material and prepared Samadhan Units. Items required in the Samadhan Lab for manufacturing a Samadhan Unit include a sheet of rubberized foam (density 40), a saw blade, liquid adhesive, sealing wax and a pair of scissors. A piece of foam measuring 6 inches × 4 inches is cut from the big sheet (Figure 4). Adhesive is applied on one side of the foam piece with some metallic applicator (Figure 5), since it is corrosive. 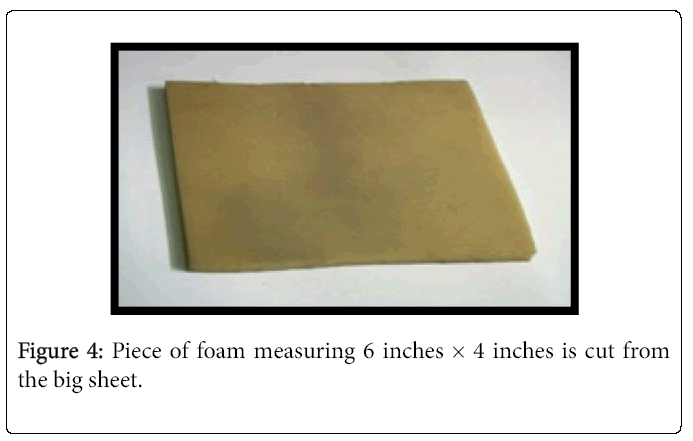 Figure 4: Piece of foam measuring 6 inches × 4 inches is cut from the big sheet. We apply with the saw blade. Then carefully, saving skin of finger tips, we roll up the foam piece into a cylinder (Figure 6) and put some weight on this cylinder to allow adhesive to dry up. Figure 6: Rolling in to a cylinder.

Any weight can be used such as a half piece of clean brick. We recommend to keep several Samadhan Units (Figure 7) ready beforehand and take up any one of them when a patient needs offloading; cut the cylinder to the size of plantar surface of the patient (Figure 8) with the saw blade. 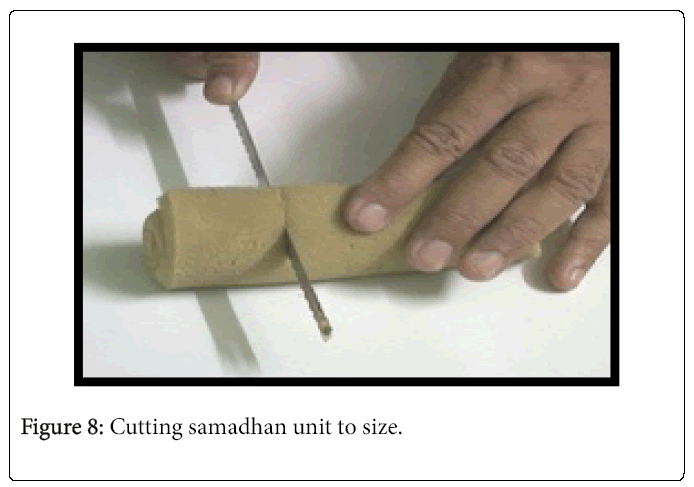 Look at the site of DFU and place the Samadhan Unit over a place, which renders adequate offloading. For example, if there were a DFU at the under surface of big toe, place Samadhan Unit along metatarsal heads (Figure 9) and wrap the retainer (Figure 10). Apply fastners at the edge of the retainer. After wrapping the retainer bandage, patient may go for his work, wearing a velcro sandles (Figure 11). Figure 11: Going for work with sandals.

SS-IR is same as SS-R with minor difference. To render it irremovable, edges of the retainer are sealed with sealing wax.

In one of the oral abstracts, presented in American Diabetes Association’s Annual Scientific Sessions, the Removable version of Samadhan System (SS-R) revealed much better healing rates of Wagner grade 1 diabetic foot wounds, compared to common footwear 73.3% vs. 13.3% with much lesser healing time (42 vs. 60 days).

Side Effects of Samadhan System

Practically very safe, yet some minor side effects have been noticed with usage of Samadhan System.

Erosion of finger tips while rolling the foam cylinder. With a little caution, this can be prevented.

Children and pets have been found to play with the Samadhan Unit. Needs placement at safer place.

Shifting of Samadhan Unit from the site of placement. Since feet are often insensate, this is sometimes seen. Mostly unit shifts forwards or backwards and some times over the ulcer itself, still some offloading is rendered. No harm is done since unit is quite soft in consistency.

Sometimes, if retainer is too lax, unit might shift over dorsum of the foot, rendering no offloading. All these side effects are minimized by patient education to check the units from time to time.

Both Samadhan Unit and retainer are washable and we provide 2 sets to every patient so that he or she could change the items as they become dirty and often soaked in discharge from infected ulcers.

While walking patient is asked to use common sandles with Velcro and felt to be fastened over the dorsal surface of the foot.

Can be used in all forms of DFUs, namely infected, Neuropathic and Vascular and mixed DFUs.

SS is available both as removable and irremovable forms.

Device can be manufactured, applied and removed by any healthcare provider, even without any training.

Samadhan System is most economical device.

Might be used for both preventive and therapeutic purpose.

Samadhan System of Offloading is most economical, easy yet effective device which can be easily made omnipresent and can serve as instant offloading device. It can make sea change in diabetes related foot care by providing effective and instant offloading which can contribute positively towards healing of foot wounds and go a long way in prevention of amputation.