Copyright: © 2016 Natuva SSK, et al. This is an open-access article distributed under the terms of the Creative Commons Attribution License, which permits unrestricted use, distribution, and reproduction in any medium, provided the original author and source are credited.

Spinal cord involvement is rare in leprosy but not unknown. We document an interesting case of a 56 year old male presented with progressive weakness of all four limbs with gross wasting of limb muscles and multiple painless trophic ulcers over the hands and legs. Examination revealed pan sensory loss in glove and stock distribution with suspended sensory loss for pain and temperature over the chest. Areflexia was noted in the upper limbs and brisk reflexes were present in the lower limbs. Generalized peripheral nerve thickening was noted. Leprosy was diagnosed and confirmed by nerve biopsy. Other causes of intra spinal lesions were excluded. This pseudo syringomyelitic from of leprosy is difficult to diagnose as it often mimics intra medullary spinal lesions.

Peripheral neuropathy has been extensively studied in leprosy, which is a chronic granulomatous disease caused by Mycobacterium leprae the only bacterial pathogen with this unique tropism, but the central nervous system (CNS) is thought to be free from bacilli. However, literature shows the evidence of involvement of central nervous system in patients with leprosy. Our aim of presenting the case report is to highlight the involvement of CNS in Hansen’s disease which may sometimes mimic the pattern that of classical syringomyelia. There is a chance of misdiagnosis unless there is an awareness of Pseudo synringomyelitic form of Leprosy, especially in developing countries. We report an interesting case of 56 year old gentleman with a rare instance of spinal cord involvement along with peripheral neuritis.

A 56 year old male came to the outpatient department of neurology with complaints of progressive wasting of upper limbs for the past 4 year along with the weakness from past 2 years. Sensory disturbances were noticed since 1 year. There were no bowel and bladder disturbances. No history of radicular and funicular pains. No symptoms of fatiguabilty or gastrointestinal disturbances were noted. There was no history of trauma or radiation exposure. Physical examination revealed thin built, emaciated, prominent bony prominences, multiple bilateral trophic changes over the hands and feet. Supra orbital, ulnar, dorsal cutaneous branch of radial and common peroneal nerves were thickened bilaterally. On neurological examination higher mental functions were intact. No cranial nerve palsies were noted. Motor system examination revealed gross wasting of distal muscles of upper limbs greater than that of proximal muscles. Hypotonia noted in the upper limbs with spastic lower limbs. The motor power of upper limb movements was reduced to a 3/5 MRC grading. Deep tendon reflexes were absent in the upperlimbs, whereas the power in lower limbs 4-/5 with bilateral exaggerated deep tendon reflexes. Superficial reflexes were absent with extensor plantar in the right lower limb. All modalities of sensation were lost in upper and lower limbs in glove and stock manner, along with dissociative suspended sensory loss for pain and temperature inT2-T5 dermatomes. Coordination and cerebellar functions could not be tested. Examination of other systems revealed no abnormality. Hemogram revealed mild microcytic hypochromic anemia. Routine biochemistry like fasting plasma glucose, liver function tests, urea, creatinine, B12, folic acid levels including thyroid and parathyroid levels were within normal limits serum was non-reactive for HbsAg, HCV, HTLV1 and 2, HIV, lyme’s, syphilis and collagen vascular diseases. MRI cervical spine (Plain and contrast) sagittal and axial images had shown signal intensity in the cervical spinal cord extending from C3-C6 level which is hyperintense on T2W and stir sequences with atrophy of spinal cord. Vertebral bodies and soft tissues were normal. No contrast enhancement. Biopsy study from the superficial radial cutaneous nerve section revealed nerve bundles wuth interspersed congested blood vessels, peri vascular lymph collections, epitheloid granulomas, Langerhans gaint cells suggestive of Neuritic leprosy (Figure 1a and 1b). Fite-feracco stain demonstrated lepra bacilli-pauci bacillary type. Patient was diagnosed as border line tuberculoid leprosy and was started on WHO paucibacillary treatment regimen of six months duration with Cap. Riampicin 600 mg once a month and T. Dapsone 100 mg once daily to prevent further progression of disease. T. Clofazamine 50 mg is added to the WHO regimen in view of extensive involvement of Central and peripheral nervous system. Nerve conduction revealed severe motor and sensory axonal neuropathy of upper and lower limbs. Electromyography done on biceps, deltoid and quadriceps revealed chronic denervation changes. Spinal biopsy was not performed as the patient refused for it. On his subsequent follow up visits over the next one year there is no further deterioration in neurological symptoms. 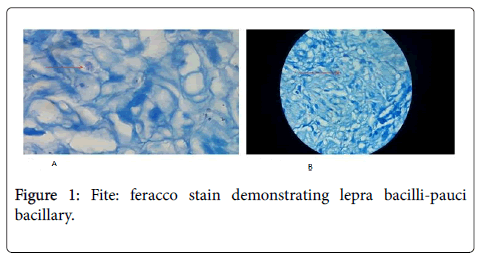 Mycobacterium leprae , the causative organism of leprosy has a unique predilection for Schwann cells, the glial cells of the peripheral nervous system. M. Leprae invasion of Schwann cells leads to the neurological damage that illustrates the sensory motor loss and subsequent deformity and disability associated with this disease.Involvement of CNS in leprosy is extremely rare, though few examples have been reported in the literature.

Our case presented with classical non compressive intra medullary spinal disease clinical features along with bilateral claw hands, trophic changes and thickened peripheral nerves with demonstration of leprae bacilli in the biopsy of superficial radial cutaneous nerve and provisionally the possibility of leprosy was thought of, manifested as pseudo syringomyelitic form of CNS involvement. Other conditions with similar neurological presentation are amyloidosis, sarcoidosis, neurofibromatosis, hypothyroidism and other immunological and infective conditions. Khadlikar et al. [1] showed the involvement of dorsal root ganglia and MRI changes with spinal cord involvement in leprosy [2-4]. Aung et al. [5] showed correlation between the upper motor neuron signs and antibody positivity for 35 kDa and PGL-1 in the CSF of leprosy atients. In a minority of patients pan sensory neuropathy was seen, who tend to have an affection of dorsal root ganglion. Autopsy of spinal cord in patients with leprosy has shown changes of degeneration of posterior columns and amyloid bodies in grey and while matter [5-7]. This patient illustrates extensive involvement of peripheral and central nervous system with newly documented MRI changes and the clinical picture suggestive of pseudo syringomyelitic form of leprosy.