Naegleria fowleri is only one among the many species of the genus Naegleria composed of a group of free living amoeboflagelates and this particular species can cause human disease if infected. The disease, namely Primary Amoebic Meningoencephalitis (PAM or PAME) caused by this amoeboid excavates Naegleria fowleri, is a very rare but fatal disease of the central nervous system. The disease is not very common, however, these days its traces are found in various countries around the globe. Sometime it becomes fatal, taking toll of human lives. Quite surprisingly, the presence of N. fowleri has been reported in various kinds of water bodies. It may be domestic water bodies, polluted water bodies from industrial waste as well as water from the swimming pools, water sport and amusement parks. The presence of N. fowleri in different water bodies is associated with various factors like temperature, pH, presence of coliforms and the amount of organic matter present. Water rich in iron and iron containing compound favour the growth of N. fowleri. As the cases of PAM are showing up these years, it is becoming a matter of utmost concern [1].

Here, we report a case of Primary Amoebic Meningoencephalitis in a 15 year old, male patient, who was admitted at Kothari Medical Centre, Kolkata, India in early summer of April 2015. He was admitted with a history of fever, headache, altered sensorium and intractable seizures for 5-7 days at the time of admission.

The patient was unconscious when admitted (GCS of E1 V1 M5). His pulse rate was regular at 98/min, blood pressure was 170/100 mmHg and the patient had fever (102°F). Neurological examination revealed neck rigidity with bilateral planter extensor reflex. Blood tests were performed to diagnose the infection causing agent. Widal test, HIV I and II, Dengue serum IgM and IgG test and test for malaria parasite were found to be negative. Blood test showed haemoglobin levels at 11.6 g/dL and WBC counts at 7400 cells/µL. Serum electrolytes, sodium and potassium were found to be 144 mEq/L and 3.8 mEq/L respectively. His relatives informed that he used to take bath in dirty river water.

On radiological imaging (CT scan and MRI of brain) no abnormality was detected.

CSF was collected from the patient and used for microscopy and DNA isolation using Qiagen Blood DNA kit. CSF samples were observed for trophozoite or cyst [1,2]. Wet mount preparation of the CSF showed pear shaped motile trophozoites form of organism with actively directional movement suggesting free living amoeba. The cytoplasm was granular in nature and central nuclear karyosome was seen. Aerobic culture of the CSF did not show any growth. No AFB was seen in Z-N stain.  India ink preparation did not reveal any capsulated organism suggestive of fungal infection. Phase Contrast microscopy showed typical morphology of Naegleria spp. PCR was performed by amplifying the Naegleria specific gene Mp2Cl5 as described earlier [1]. By performing the nested PCR, typical Naegleria specific band of 110 bp was observed in 1.5% agarose gel electrophoresis (Figures 1 and 2) [1]. 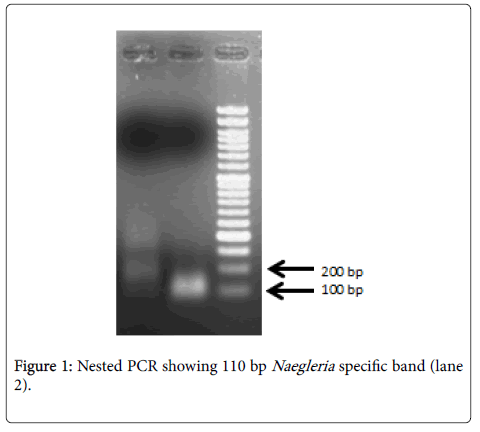 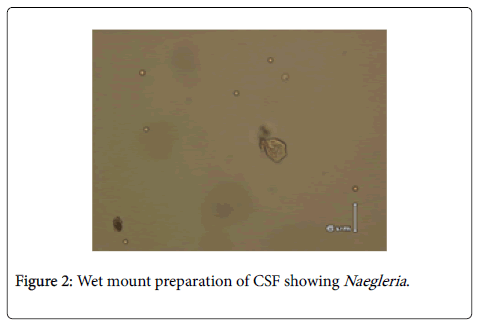 The disease is very serious and often fatal [2]. The patient unfortunately died 10 days after admission. The disease was first reported in Australia in 1965 [3] and was also reported in United States of America [4]. Literature survey up to 2008 [5] indicated a total of 300 confirmed cases due to N. fowleri. The occurrence of N. fowleri in the domestic water supply have been reported previously [1] in other countries but not in India. This is the first time that this infection has been diagnosed in Kolkata, West Bengal, India. There are reports of this parasite inhabiting dirty water in large lakes and rivers [6]. The most probable reason of infection in the above reported case is from water source as the patient had a history of bathing in river water from Ganges River too. So, unless the water sources and river water are properly checked for N. fowleri it cannot be concluded how the infection is acquired. This report signifies that, although extremely rare, this organism may cause fatal meningoencephalitis with intractable seizure in humans. Careful history regarding lifestyle should be considered along with screening of CSF (Cerebrospinal fluid) for Naegleria fowleri to diagnose the infection.

This study was jointly supported by the grants from National Institute of Infectious Diseases, Japan, Okayama University Program of Founding Research Centre for Emerging and Re-emerging Infectious Disease (OUP 3-5), and Ministry of Education, Culture, Sports, Science and Technology of Japan. The authors also acknowledge to the patients, provide their fecal samples for the study. The authors acknowledge Mrs. Debarati Ganguly of Calcutta University for her immense help in proof-reading of this manuscript.

Copyright: © 2017 Ganguly S, et al. This is an open-access article distributed under the terms of the Creative Commons Attribution License, which permits unrestricted use, distribution, and reproduction in any medium, provided the original author and source are credited.