Background: Intraosseous meningiomas often display clinical and radiologic features that can be confused for fibrous dysplasia. Histopathology usually confirms the diagnosis. We present a case initially misdiagnosed as fibrous dysplasia by histopathology.
Methods: A 58-year-old male presented with worsening proptosis and vision loss. He was previously diagnosed with fibrous dysplasia at an outside institution, with histologic confirmation of the diagnosis during orbital decompression.
Results: On examination there was evidence of optic neuropathy and mild restriction of gaze. Imaging revealed a large ossified mass of the greater sphenoid wing. Craniotomy and surgical decompression resulted in improved vision and symptoms. Histopathology revealed meningioma with bony and dural components.
Conclusions: This case emphasizes the need for a high level of suspicion and representative biopsies to reach prompt diagnosis of meningiomas in cases of recurrent or atypical fibrous dysplasia

Intraosseous meningiomas of the sphenoid bone are rare tumors that often present with proptosis and loss of vision. They display clinical and radiographic features that can appear similar to the benign fibrous dysplasia [1]. The definitive diagnosis is usually confirmed histologically. We report a case of recurrent proptosis and optic neuropathy, initially misdiagnosed at an outside institution as fibrous dysplasia which ultimately revealed intraosseous meningioma.

A 58-year-old male presented with a history of recurrent painful right proptosis. He reported progressive visual loss over a period of several months, but denied diplopia. Prior imaging showed a bony lesion of the greater wing of the right sphenoid. The patient previously had orbital decompression performed twice at an outside institution, five and three years prior to presentation. Histopathology from prior surgery revealed evidence of fibrous dysplasia and normal bone.

Upon presentation, visual acuity was 20/50 in the right eye and 20/30 in the left. A brisk relative afferent pupillary defect was present in his right eye, in addition to loss of color vision on Ishihara plates and mild pallor of the optic nerve. Mild restriction in all directions of gaze was seen on the right side, as well as a relative proptosis of eight millimeters as compared to the left eye.

Orbital CT imaging (Figures 1A and 1B) showed a large hyperostotic lesion of the right greater wing of the sphenoid encroaching upon the optic canal. This lesion demonstrated feathered borders and surrounding soft tissue involvement. MRI with gadolinium contrast (Figure 1C) showed extensive enhancement and adjacent thickening of the surrounding dura concerning for meningioma. Figure 1a: (A & B) Axial and coronal CT imaging (Figures 1A and 1B) reveals a mass centered (white arrow) within the right greater sphenoid wing with extension into the frontal and temporal bones. The inner and outer tables demonstrate a feathered or speculated appearance. There is outward bowing of the inner table towards the brain, and the mass extends towards the orbital apex. 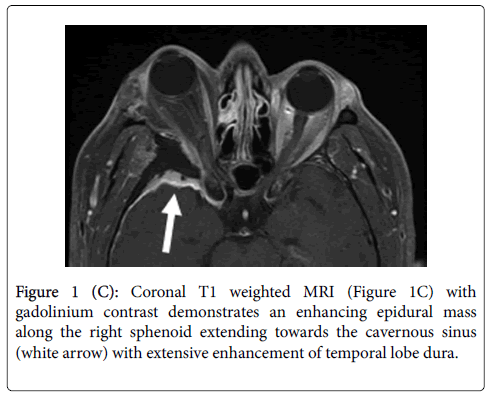 A right fronto-temporal craniotomy was performed for access and surgical debulking. Special attention was paid to decompress the optic canal and the sphenoid bone. Post-operative visual acuity improved to 20/30, with a four millimeters decrease in relative proptosis and improvement on the Humphrey visual field. Histopathology revealed bland meningo-epithelial cells with low nuclear to cytoplasmic ratios, indistinct borders and intra-nuclear inclusions embedded within bony fragments. The positive immunoreactivity with epithelial membrane antigen (EMA) confirmed the diagnosis of meningioma (Figure 2A). The patient underwent postoperative radiation therapy to decrease risk of recurrence. Figure 2A: Positive staining of cells at 200x with epithelial membrane antigen (EMA) consistent with the diagnosis of meningioma (black arrow).

While meningiomas represent almost 15% of all brain tumors [2], primary intraosseous meningiomas are a rare extradural subtype that accounts for less than two percent of all meningiomas. They commonly demonstrate osteoblastic activity with robust hyperostosis surrounding a central lesion [2]. Meningiomas can also display mixed osteoblastic and osteoclastic activity, or more rarely an osteolytic response [3]. Although sphenoid involvement might be secondary to an extension of a dural meningioma, in our case, the clinical history and tumor configuration on MRI favor a primary intraosseous meningioma with dural extension [4,5].

The clinical and radiologic characteristics of meningioma can be confused with those of fibrous dysplasia [1-3,6-8]. Fibrous dysplasia is a congenital, progressive anomaly of bones characterized by the replacement of normal bone structure by fibro-osseous tissue. They classically present with slowly progressive proptosis caused by dense hyperostotic lesions that commonly arrest growing after puberty [9]. Fibrous dysplasia and intraosseous meningioma can both present as hyperostotic lesions near the orbital apex and may appear radiographically similar [1,8,10]. Factors favoring intraosseous meningioma over fibrous dysplasia include inward protrusion of the inner table of the hyperostotic lesion on CT, feathering of lesions edges, soft tissue involvement, int3ense enhancement on MRI and lack of involvement of the frontal bone [1,7]. The differential diagnosis also includes osteoma, metastasis, Paget’s disease, eosinophilic granuloma and Langerhans histiocytosis.

The presence of neoplastic meningeal cells on histopathology allows for a clear distinction between the diagnosis of meningioma and fibrous dysplasia. Positive staining of cells with EMA on immunohistochemistry further aids in the diagnosis. Although it is possible for fibrous dysplasia and intraosseous meningioma to concomitantly occur [3], it is more likely that the previous surgical specimens only sampled the peripheral hyperostotic fibrotic changes, omitting the meningioma component. This resulted in a delay in the final diagnosis. Although the majority are benign, the chronicity and recurrence of meningiomas may require more aggressive treatment to prevent optic neuropathy, pain, and diplopia [1]. Complete surgical excision is favored, along with adjuvant radiation therapy for recalcitrant cases [8].

In summary, intraosseous meningioma should always be suspected in cases of recurrent or atypical fibrous dysplasia. It is important to obtain representative biopsy specimens from the core of the lesion (Figure 2B and Figure 2C). Histologic specimens obtained from the periphery may only reveal reactive hyperostotic changes that can be misdiagnosed as fibrous dysplasia. Delay in diagnosis and treatment can cause significant morbidity and mortality as more critical structures become involved [8]. Copyright: ©2015 Shaftel SS, et al. This is an open-access article distributed under the terms of the Creative Commons Attribution License, which permits unrestricted use, distribution, and reproduction in any medium, provided the original author and source are credited.