Is a Small Intestinal Biopsy Always Necessary to Diagnose Celiac Disease in Children?

Copyright: © 2016 Sorser SA, et al. This is an open-access article distributed under the terms of the Creative Commons Attribution License, which permits unrestricted use, distribution, and reproduction in any medium, provided the original author and source are credited.

Objectives: The purpose of this study was to assess the diagnostic accuracy of the tissue transglutaminase antibody (tTG-Ab) for celiac disease (CD) in children.

Methods: A retrospective chart review of children suspected to have CD from January 2007 to December 2011 was conducted. Patients were excluded if they had an Immunoglobulin A (IgA) deficiency, an autoimmune disorder or were following a gluten-free diet at the time of presentation. Gender, age at the time of small bowel biopsy, chief complaint, family history of celiac disease, serum IgA and tTG-Ab were recorded. Sensitivity, specificity, positive predictive values (PPV) and negative predictive values (NPV) of tTG-Ab compared to biopsy result were calculated, using three different cut-off values of tTG-Ab: >100 U/mL, >200 U/mL, and >300 U/mL.

Conclusion: Low sensitivity precludes the use of tTG-Ab as a screening test, although tTG-Ab >300 U/mL has a very high specificity and PPV for celiac disease. In pediatric patients with clinical features suggestive of celiac disease, a tTG-Ab of >300 U/mL may be used to diagnose CD, avoiding duodenal biopsy.

Celiac Disease (CD) affects approximately 0.5 - 1% of the general population [1-5]. Damage to small intestinal villi results in malabsorption, leading to chronic diarrhea and failure to thrive. Nonspecific presenting symptoms include abdominal pain, osteoporosis, neurological symptoms and elevated transaminases [6-9]. The symptoms of CD usually resolve after gluten is removed from the diet [10,11]. The diagnosis typically rests on the appropriate clinical picture and ultimately, serologic, endoscopic and histologic findings, as well as response to a gluten free diet [12].

The gold standard for diagnosing CD is a small intestinal biopsy [13,14] which may show villous atrophy, intraepithelial lymphocytes or crypt hyperplasia. The major drawback of small intestinal biopsy is its invasive nature, requiring sedation for an endoscopic procedure and the associated risk of an endoscopy [15,16]. Furthermore, if mucosal changes are patchy, they may be missed on biopsy [17,18]. Serologic tests, on the other hand are easy to perform, relatively cheap and widely available [19]. Currently these tests are increasingly used in symptomatic patients as a tool for referral for a small intestinal biopsy. However, some drawbacks, including a high false positive rate in patients with other autoimmune conditions, are noted. Recently, the European Society for Pediatric Gastroenterology, Hepatology and Nutrition (ESPGHAN) recommended that biopsy may be avoided if a pediatric patient has all of the following: 1) IgA anti tissue transglutaminase (tTG-Ab) >10X the upper limit of normal, 2) symptoms of celiac disease, 3) positive IgA anti-endomysial antibodies (EMA), 4) high risk human leukocyte antigens (HLA)-DQ2 or DQ8, and 5) a clinical response to a gluten-free diet [1]. This recommendation, along with other papers [20-22], suggests that conclusive serologic evaluation may negate the need for a biopsy.

In patients with symptoms suggestive of CD, the initial work up usually involves measuring IgA tTG-Ab and EMA. Currently, testing for IgA antibodies against tTG is considered to be the best initial serological test. ESPGHAN has recommended checking total IgA levels at the time of initial testing [20]. The sensitivity and specificity of the serological tests have increased in the recent years. The tTG-IgA Ab titer was shown to correlate well with severity of the biopsy results in both adult and pediatric patients [23,24]. Despite a high sensitivity and specificity, serological tests may have a low positive predictive values (PPV) and maybe difficult to interpret when one is positive and the other is negative [25].

In our retrospective review, we assessed the correlation between the tTG-IgA Ab positivity and the results of small intestinal biopsies. We also reviewed the correlation of serologic levels for tTG-IgA Ab at which the sensitivity, specificity, PPV and negative predictive value (NPV) are optimal and closely match the results of the small intestinal biopsy.

This was a retrospective chart review of all patients referred to the Pediatric Gastroenterology office at St John Hospital and Medical Center between January 2007 and December 2011 for suspected Celiac disease. The study was approved by the Institute Review Board (IRB). Patients between 2 and 18 years of age, who had both duodenal biopsy results and tTG-IgA Ab results, were included in the study. We excluded those patients on a gluten free diet, patients with IgA deficiency or patients with diabetes mellitus or other autoimmune disorders, as autoimmune disorders may give as high as a 50% false positive tTG-Ab [1]. Demographic data including age at biopsy, gender and ethnicity were collected. Clinical data including the presenting complaint, co-morbidities and family history of CD were recorded for each patient.

TTG-IgA Ab, and total IgA levels were measured. The assay used for tTG-IgA Ab testing was the human recombinant tissue transglutaminase antibody from Inova Biomechanics Research Laboratory. The cutoff for normal value of tTG-IgA was taken as less than 15 Units/mL. IgA deficiency was defined as IgA levels less than 7 mg/dL.

Duodenal biopsies were taken via esophagogastroduodenoscopy from the second portion of the duodenum and duodenal bulb. Histological diagnosis was made by the Department of Pathology at St. John Hospital. The pathologists were not informed of the results of the serological tests. Marsh classification was used to classify the histologic appearance of the duodenal mucosa [26,27]. Marsh I (increased intraepithelial lymphocytes) and Marsh II (crypt hyperplasia without villous atrophy) were not considered diagnostic of Celiac disease. Marsh III histology (crypt hyperplasia and increased intraepithelial lymphocytes with villous blunting) was considered diagnostic of Celiac disease.

Sensitivity, specificity, PPV and NPV were calculated for the tTGIgA Ab test using the duodenal biopsy as the gold standard. Frequency and descriptive statistics were calculated. Associations between categorical variables were measured using Chi-square. Differences between groups on continuous variables were measured using t-tests for independent groups. P values <0.05 were considered statistically significant. All analyses were performed using SPSS version 12.0.

A total of 195 charts were reviewed. Twenty-one were excluded: 10 patients with diabetes mellitus, five patients with IgA deficiency and six patients in whom IgA levels were not available. A total of 174 patients were included in the final study. Mean age at the time of duodenal biopsy was 9.8 ± 5 years with 51% of the patients being male.

The most common presenting symptom was abdominal pain found in 64% of the patients followed by diarrhea in 15%. Of the 11.5% of patients with a family history of celiac disease, 45% had a positive biopsy, (p < 0.0005).

Overall 51 patients (29%) had an abnormal tTg-IgA Ab level of >15 Units/mL and 22 patients (13%) had biopsy proven CD. These findings are summarized in Figures 1, 2 and 3 and Table 1. The demographic data did not prove to be significant in regards to all correlations. 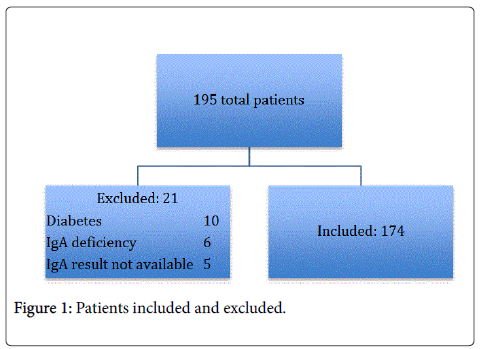 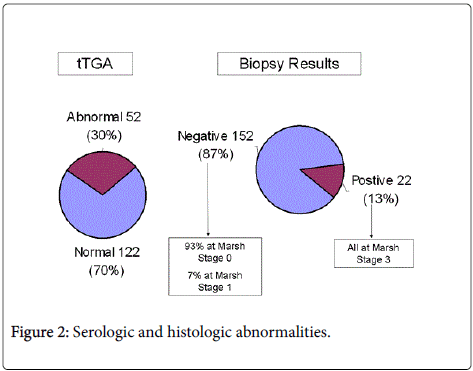 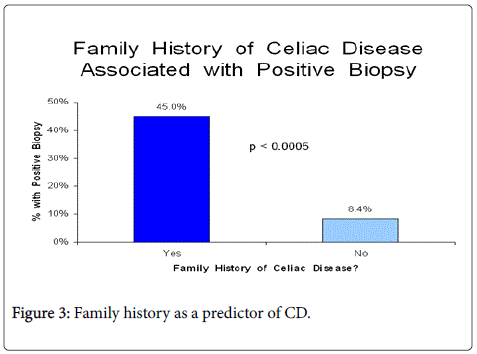 Figure 3: Family history as a predictor of CD.

Table 2: Sensitivity, Specificity, PPV and NPV based on tTG cut-offs.

Small intestinal biopsy is currently the gold standard for diagnosing CD. Endoscopy does not come without procedural risks as well as risks associated with anesthesia use. Less invasive modalities to accurately diagnose CD would not only be safer for the patients but less expensive. With improvement in sensitivity and specificity of serological tests, CD may be diagnosed without the need for small intestinal biopsy. The success of a serologic approach for diagnosis is dependent on targeting a patient population that has a high pretest probability of CD and the appropriate use of cutoff values is essential [2]. Previous studies in the adult and pediatric population have shown that tTG-IgA Ab >100 units/mL may be sufficient to diagnose CD [28-31]. However, this may compromise the positive predictive value of the test.

Thus, while elevated serology correlated with Marsh III histology, a normal level of tTG-IgA Ab level does not rule out CD, particularly in the presence of symptoms suggestive of CD. Upper endoscopy with small intestinal biopsy should still be performed in patients with a high clinical suspicion for CD despite normal tTG-IgA Ab levels. Another important finding of our study is the low sensitivity and high specificity, PPV and NPV.

The limitations of this study are its retrospective study design and small sample size. However, it should be noted that for all of the patients who were enrolled, a complete history and physical was available and these patients have been followed in the clinic after their diagnosis was made.

Our study shows that a level of tTG-IgA Ab above 300 has a very high specificity for CD and that it can be used as definitive test to make the diagnosis in the pediatric population, particularly in patients with signs and symptoms suggestive of CD. The low sensitivity (46%) would preclude the use of this serologic test as a screening test for CD. Based on this retrospective review, a larger study should be conducted to further elaborate the diagnostic accuracy of tTG-IgA Ab test for diagnosing CD.