Metastasis of Meningioma: A Rare Differential Diagnosis in Subcutaneous Masses of the Scalp

Background: Subcutaneous masses of the scalp have a wide range of differential diagnosis. After removal of a meningioma in the patient’s history, scalp metastasis from the previously resected meningioma should be considered. Methods: A 86 year old patient presented with a local swelling on the left temporal forehead and no other clinical symptoms. Eleven years earlier an extra-axial meningioma was resected. The patient was receiving immunosuppressive therapy subsequent to kidney transplantation. After clinical examination and MRI, a lipoma was suspected. The mass was resected under local anesthesia. Results: Histopathology revealed a metastasis of the previously removed meningioma (WHO grade II). No further treatment was recommended. Clinical follow-up was without pathological findings so far. Conclusion: Scalp metastases of meningiomas are a rare finding. However, if patient history reveals removal of a meningioma, scalp metastasis must be a differential diagnosis for subcutaneous masses even years after the initial surgery.

Meningiomas are neoplasms of the meningoendothelial cells of the arachnoidal layer covering the brain. Metastasis has been reported in less than 1 per 1000 patients [1] and only 15 cases of scalp metastases have been described in literature [2]. Usually, the scalp metastasis is located near the craniotomy site. The suggested most common mechanism is intraoperative seeding. However, up to 20% of all intracranial meningiomas develop a synchronous extracranial extension [3]. Therefore, expansion of the primary tumor to the subcutaneous tissue or skin (invasive tumor growth) is also a possible pathomechanism [1]. Risk factors for scalp metastases include multiple surgeries, piecemeal resection of the primary tumor, immunosuppression, cerebrospinal fluid fistulae, radiation therapy and delayed wound healing [1]. There is a broad spectrum of clinical differential diagnoses for subcutaneous masses of the scalp including nevus sebaceous, epidermoid cyst, fibroma, hemangioma, lipoma, verrucous hamartoma and alopecia areata. From a histopathological point of view, metastases of meningiomas have to be differentiated from squamous cell carcinoma, hemangioma, giant cell fibroblastoma, perineuroma, myoepithelioma, angiosarcoma and cellular fibrous histiocytoma [1].

An 86 year old patient was referred to our outpatient clinic with a progressively enlarging local swelling on the left temporal forehead first identified 18 months before (Figure 1). Although the patient had never reported pain or other neurological symptoms related to the lesion, the patient requested its removal for aesthetical reasons. 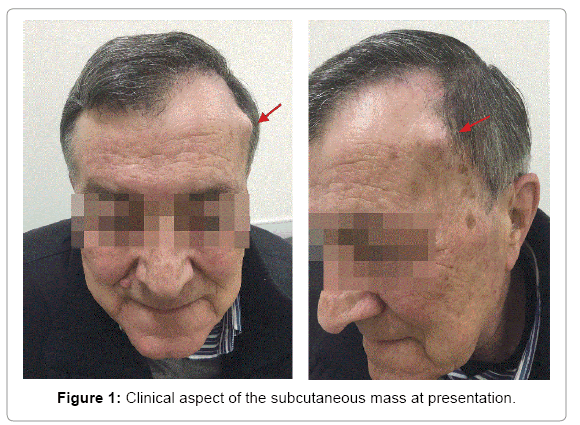 Figure 1: Clinical aspect of the subcutaneous mass at presentation.

The medical history of the patient revealed renal transplantation at the age of 69 and therefore continuing immunosuppressive therapy. At the age of 73, an atypical, left frontal located, extra-axial meningioma WHO grade II was diagnosed (Figure 2). This was completely removed through coronar incision craniotomy. In the same year, a bronchial adenocarcinoma (pT1a pN0) of the right inferior lobe was treated with right inferior lobectomy, lymph node dissection and partial pleurectomy. At the age of 74, the patient received radiation therapy with a total of 50 Gy over 5 fractions for a second mass in the superior lobe of his left lung.

Clinical examination of the forehead showed a subcutaneous, painless mass with a diameter of 1.5 × 2 cm close to the left lateral craniotomy site. The mass was covered by unsuspicious skin and movable on the fascia.

Because of the patient’s history of a meningioma, a MRI scan was carried out. The scan revealed a subcutaneous, contrast enhancing mass with a size of 22 × 8 mm (Figure 3). Radiographical findings revealed no suspicion for a recurrence of the resected meningioma.

The patient underwent surgical resection of the mass under local anesthesia. Intraoperatively, the mass was located subcutaneously, did not infiltrate the surrounding muscle tissue or bone and had a lipomalike aspect. No postoperative complications occurred.

Histological analysis revealed a metastasis of the initial meningioma (WHO grade II). Hematoxylin and eosin stained paraffin sections revealed a typical meningothelial meningioma with lobules of meningothelial cells. These cells were positive for epithelial membrane antigen (EMA) and progesterone receptor by immunohistochemistry and a maximum of 5% of tumor cells were positive for Ki-67 (Figure 4). 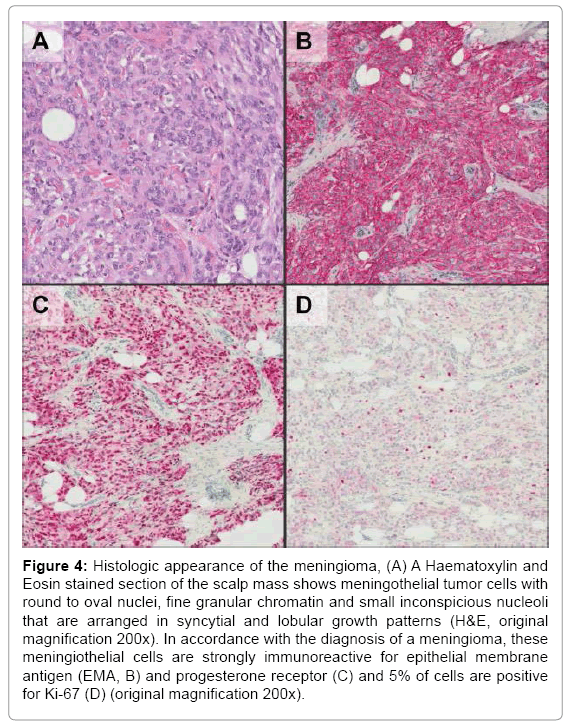 Figure 4: Histologic appearance of the meningioma, (A) A Haematoxylin and Eosin stained section of the scalp mass shows meningothelial tumor cells with round to oval nuclei, fine granular chromatin and small inconspicious nucleoli that are arranged in syncytial and lobular growth patterns (H&E, original magnification 200x). In accordance with the diagnosis of a meningioma, these meningiothelial cells are strongly immunoreactive for epithelial membrane antigen (EMA, B) and progesterone receptor (C) and 5% of cells are positive for Ki-67 (D) (original magnification 200x).

The findings were discussed at the multidisciplinary meeting. Recommendations where limited to clinical follow-up. At present, there is no sign for local recurrences.

The patient consented to publication.

Including our case, 16 cases of scalp metastases of meningiomas have been described in literature [1] (Table 1). In the presented case, there was one risk factor (the immunosuppressive therapy). Other risk factors, as multiple surgeries, radiation therapy, cerebrospinal fluid fistula or wound breakdown after initial resection, could not be identified. The time range between primary resection of the meningioma and clinical manifestation of the metastasis was 11 years, corresponding to the described time range in literature (between 1 year and 6 months and 16 years). Histopathologically, the metastasis was classified a WHO grade II meningioma which seems to be a common finding (10 out of 16 cases according to the literature). A manifestation of the adenocarcinoma of the lung was ruled out by immunohistochemistry.

Subcutaneous masses have a plethora of differential diagnosis including atheromas, epidermoidal cysts and lipomas. In patients with a history of meningioma, scalp metastasis should be ruled out, even years after primary treatment. Metastases of meningioma origin are especially important to consider in the case of multiple surgeries, radiation therapy, immunosuppression, cerebrospinal fluid fistula or wound breakdown after initial resection. In these cases, the mass should be resected and histopathologically evaluated even if presenting with a clinical and radiologic benign aspect.

Copyright: © 2017 Lunger A, et al. This is an open-access article distributed under the terms of the Creative Commons Attribution License, which permits unrestricted use, distribution, and reproduction in any medium, provided the original author and source are credited.