Copyright: © 2015 Kizilbash N, et al. This is an open-access article distributed under the terms of the Creative Commons Attribution License, which permits unrestricted use, distribution, and reproduction in any medium, provided the original author and source are credited.

The cure for Alzheimer's disease involves searching for candidate compounds that can act as inhibitors for Acetylcholinesterase (AChE) enzyme. Regional cerebral blood flow can be increased in patients with Alzheimer’s disease by Acetylcholinesterase inhibitors. In this regard, Tetraphenylporphinesulfonate (TPPS), 5,10,15,20-Tetrakis (4-sulfonatophenyl) porphyrinato Iron(III) Chloride (FeTPPS) and 5,10,15,20-Tetrakis (4-sulfonatophenyl) porphyrinatoIron(III) nitrosyl Chloride (FeNOTPPS) were investigated as candidate compounds for inhibition of Acteylcholinesterase of Drosophila melanogaster (DmAChE) by use of Molecular Docking. FeNOTPPS was found to form the most stable complex with DmAChE. 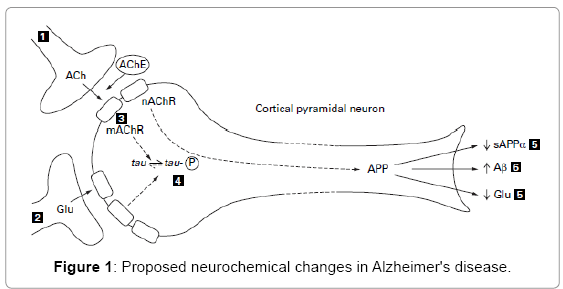 Acetylcholinesterase enzyme (AChE) is bound to cellular membranes of excitable tissues at cholinergic synaptic junctions. It catalyzes the hydrolysis of Acetylcholine neurotransmitter present in the brain [3]. The structure of AChE is a 12-stranded mixed β-sheet surrounded by 14 α- helices. There is a catalytic triad present in the active-site gorge of the Acteylcholinesterase enzyme of Drosophila melanogaster (DmAChE) which consists of three amino acids, namely Ser238, His440 and Glu367 (Figure 2). Figure 2: Schematic representation of the sites in DmAChE. The catalytic triad in the Acyl Binding Pocket consists of three amino acids, Ser238, His440 and Glu367.

Due to the toxic effects of pre-existing AChE inhibitors, current research is focused on developing new AChE inhibitors or modifying existing by computational methods to determine which ligand best fits the AChE binding site. In this study, molecular docking was used to predict the strength of binding of Porphyrin-derivatives: TPPS, FeTPPS and FeNOTPPS with DmAChE. The strength of binding was quantified by use of a Scoring Function that approximates the free energy of binding [4,5] obtained by Molecular Docking of TPPS, FeTPPS and FeNOTPPS with DmAChE.

Tetraphenyl porphinesulfonate (TPPS), 5, 10, 15, 20-Tetrakis (4-sulfonatophenyl) porphyrinato Iron (III) Chloride (FeTPPS) and 5,10,15,20-Tetrakis (4-sulfonatophenyl) porphyrinato Iron(III) nitrosyl Chloride (FeNOTPPS), were constructed on a Silicon Graphics Octane2 workstation using IRIX 6.5 operating system. The energies of all the molecules were minimized using the TRIPOS force field and Gasteiger- Hückel charges with a convergence gradient of 0.05 kcal/mol/Å. For FeTPPS, the coordinate bonds of Fe(III) and pyrrole nitrogen were defined first before energy minimization. For FeNOTPPS, the coordinate bonds of Fe(III) were first defined with pyrrole nitrogen and then with nitric oxide.

SYBL software was used for docking TPPS, FeTPPS and FeNOTPPS in the crystal structure of DmAChE (PDB code: 1QON) (Figure 3). These complexes were then subjected to molecular dynamics simulation for 10,000 fs then subjected to energy minimization using a TRIPOS force field and Gasteiger-Hückel charges with a convergence gradient of 0.05 kcal/mol/Å. 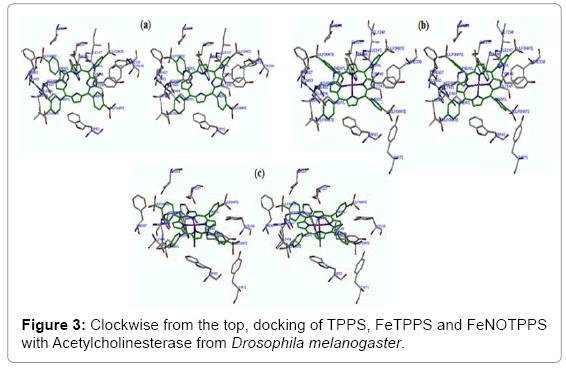 Figure 3: Clockwise from the top, docking of TPPS, FeTPPS and FeNOTPPS with Acetylcholinesterase from Drosophila melanogaster.

The strength of binding of TPPS, FeTPPS and FeNOTPPS to DmAChE (PDB code: 1QON) was determined by the use of Scoring Functions. Scoring Functions are expressed as a sum of separate terms that describe the various contributions to binding [6,7]. Scoring Functions include terms for van der Waals interactions, hydrogen bonding, de-solvation effects, metal ligand bonding, etc [8-11]. A high value of the Scoring Function represents “tight” binding between the protein and the ligand and vice versa.

The “Cholinergic hypothesis” states that the destruction of cholinergic neurons in the basal forebrain results in the deterioration of cognitive function in Alzheimer’s disease [12]. Biochemical investigations of biopsy tissue taken from patients show that presynaptic markers of the cholinergic system are reduced in number [13]. This is results in the reduction of AChE activity which leads to the degree of loss of cognition in patients with Alzheimer’s disease [13-16].

The tertiary structure of DmAChE is similar to that of other vertebrate AChEs. The differences are in some of the surface loops which deviate by up to 8 Å, and the C-terminal helix is also shifted substantially. The potential surface of DmAChE is also similar to that of other AChE molecules which includes the vertebrate AChE [17,18]. It shows the presence of negative charges near the opening of the active-site gorge and positive charges on the opposite side of the molecule (Figure. 4a). The direction of the molecular dipole moment is approximately along the axis of the active-site gorge (Figure. 4b). Figure 4: (a): Representation of solvent-accessible molecular surface. The entrance to the active-site gorge is centered within the large red area near the top left. Color coding represents electrostatic potential surfaces: 2.5 kT/e in blue and 22.5 kT/e in red. (b): Schematic drawing of the 60.25 kT/e isopotential surface of DmAChE. Orientation is the same as in (a), and the green arrow denotes the direction of the dipole moment.

An important feature of the active site of DmAChE is a 20 Å long, deep and narrow gorge that is coated with aromatic residues (Figure 2). Their side chains can interact with various inhibitors via noncovalent interactions by assuming different conformations [19]. The experimental results show that the active-site gorge of DmAChE can allow the porphyrin inhibitors to enter which can result in blockage of the further entry of the of acetylcholine substrate. The experimental data (Table 1) also demonstrates that FeNOTPPS is energetically the most stable in DmAChE. This can be due to the greater hydrophobicity of FeNOTPPS as compared to TPPS and FeTPPS. The larger size of FeNOTPPS makes it less soluble in water and more stable in the activesite gorge of DmAChE. FeNOTPPS is energetically more stable than TPPS and FeTPPS when bound to DmAChE.

The breakdown of cholinergic neurons observed in Alzheimer’s disease cause atherosclerosis, arteriosclerosis, arterial stiffness, and endothelial dysfunction which result in damage to the blood-brain barrier and brain function. These factors can reduce perfusion of the brain by arterial blood, resulting in ischemia/hypoxia and neuronal and glial injury [20]. Inestrosa et al. [21] have reported that AChE enzyme promotes amyloid plaque formation from amyloid-β peptide. The formation of amyloid plaques can be inhibited by ligands such as TPPS, FeTPPS and FeNOTPPS.

The results show that Tetraphenylporphinesulfonate (TPPS), 5,10,15,20-Tetrakis (4-sulfonatophenyl) porphyrinato Iron(III) Chloride (FeTPPS) and 5,10,15,20-Tetrakis (4-sulfonatophenyl) porphyrinatoIron(III) nitrosyl Chloride (FeNOTPPS) can serve as inhibitors of acteylcholinesterase of Drosophila melanogaster (DmAChE). This is significant in light of the fact that this model can be transposed to humans and these inhibitors can be employed to increase regional cerebral blood flow in patients with Alzheimer’s disease. 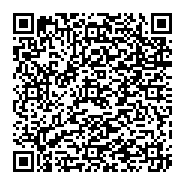