ISSN: 2090-9888
Lovotics
Make the best use of Scientific Research and information from our 700+ peer reviewed, Open Access Journals that operates with the help of 50,000+ Editorial Board Members and esteemed reviewers and 1000+ Scientific associations in Medical, Clinical, Pharmaceutical, Engineering, Technology and Management Fields.
Meet Inspiring Speakers and Experts at our 3000+ Global Conferenceseries Events with over 600+ Conferences, 1200+ Symposiums and 1200+ Workshops on Medical, Pharma, Engineering, Science, Technology and Business

Need to Keep a Distance from Robots as they Come Closer to us?

Copyright: © 2014 Jayakrishnan T. This is an open-access article distributed under the terms of the Creative Commons Attribution License, which permits unrestricted use, distribution, and reproduction in any medium, provided the original author and source are credited.

It was during June 2013, when I returned home after my office, I have noticed a strange expression in my wife’s face tells me that she is not very much happy at me. I spoke with her during that night to understand the reason behind the same. To add to my surprise, it was nothing but a photograph she came across in an article about my company ASIMOV Robotics in LiveMint newspaper of Wall Street Journal (http://www.livemint.com/Leisure/RdD60ogZYAJ03dmJO7iK2I/ Asimov-Robotics--The-automaton-factory.html).

In Figure 1, I was standing with our 6 ft lady robot ISRA putting my arm around her shoulders while she did the same in reciprocal! I actually wanted something special for the Livemint’s photograph and whole heartedly accepted the photographer’s idea to pose like that. I never expected that my wife will consider her as another girl and will be unhappy about that! 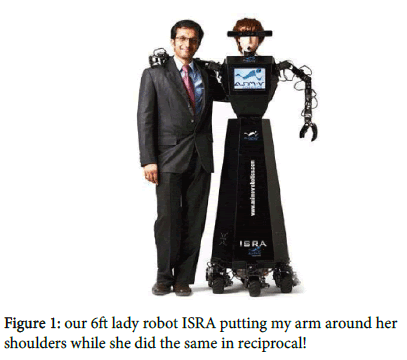 Figure 1: our 6ft lady robot ISRA putting my arm around her shoulders while she did the same in reciprocal!

Though I could convince her without much difficulty to bring the status quo ante, this incident has given me an insight of the way human beings look at machines that possess some character or behaviour. Obviously ISRA has some AI features even to respond to human verbal command and gestures which I had demonstrated to her before.

One might have notice that the kind of intimacy people show to their personal gadgets and belongings even though they do not have much intelligence to show off. I really love riding my bicycle better than another one of the same make or higher. I enjoy the certainty of its responses to my actions and it is so effort less to me even when it has a back lash in the steering bar or misalignment with the wheels.

This is the result of a close acquaintance I developed with this machine through these years. It is even true in the case of the pen I use.

If this is the case of standard gadgets we use in our life, how influential Robots with complex behaviour would be in our day today life! I also have noticed that my kids as they play with robotic toys (with AI) have developed an incredibly stronger relationship than they used to have with their teddy bear. Unlike teddy bear, a robotic pet shows off various behaviour patterns based on proximity image recognition, voice commands and haptic interactions with them.

In fact, humans were passionate about imitating nature from even from long back. Over many millions of years of R&D, nature has perfected the raw-materials, designs, tools, mechanisms, processes, algorithms, methods for developing these systems. They helped as a model for imitating, and inspiration to address human problems and to refine the existing solutions.

If you look at, nothing has been ever created without mimicking or adapting methods, processes and systems established by nature directly or indirectly. Hence it’s natural that Robotics researchers often inspired by natures control methodologies for their robotic systems, in choosing suitable behaviour patterns and for the adaptive learning.

Albeit human beings are nature’s ultimate engineering marvel, exponential growth in the field of Robotics and AI will likely allow us to make significant strides towards closely replicating ourselves by the end of this decade itself. A recent market survey reveals that it by 2025 there will be huge market of 70 Billion USD for social robots.

The improvement in perception made it possible for the robot to mimic human actions and behaviour. The behaviour is usually built as a higher level intelligence on the top of the basic control scheme by processing the sensory information collected from the environment.

Perception serves as input to AI to perform detection, reasoning, planning, learning and problem solving. During many key process of machine learning, there are multiple and repeated use of the same sensors for a better perception which intern be used to develop a behaviour or to trigger meaningful actions.

Since perception is inherently inaccurate and incomplete, particularly under environments undergoes changes in unpredictable ways, social robots must incorporates probabilistic approach to represent state and reason about change of state.

Another easy and effective learning tool to perfect social interaction between human and robots is to allow robots closely watch human task execution to adaptive a solution or optimize the existing solution. Apart from being an easier way in acquiring skills, this also helps in setting ground rules of social cognitive intelligence exhibit by human beings.

However, as robots are becoming more and more emotionally intelligent and increasingly human look alike, they become socially more acceptable; no doubt. This will also lead to develop complex relationship between human beings and robots. A quick statistics show that the male visitors to our office are more interested to pose with the latest version of our lady robot ISRA for a photograph (Figure 2). Figure 2: latest version of our lady robot ISRA for a photograph.

Time is not far away that we should respect and accept the rights of a robot as a social being. I think I should not get surprised one day if we find ISRA missing from our front office!