Copyright: © 2012 Sun Z. This is an open-access article distributed under the terms of the Creative Commons Attribution License, which permits unrestricted use, distribution, and reproduction in any medium, provided the original author and source are credited.

Research in manipulation of non-metallic particles in a liquid metal by using an electromagnetic (EM) field is promoted by both the requirement of more efficient materials design and the development of cost-effective electromagnetic apparatus. The particles of sub/micrometer sizes can be agglomorated, segregated, aligned and/ or removed by applying a suitable EM field during liquid metal processing. The effciency and applicability depends highly on the nature of the particles and the difference from the liquid metal matrix. In the present paper, the fundaments/physics of non-metallic particles manipulation by EM processing are discussed and some potential application possiblities in industry are proposed.

To improve the efficiency of materials manipulation or obtain a metallic-based materials with required properties has been of broad interest. One of the topics by using an electromagnetic (EM) field concerns the manipulation/removal of non-metallic solid particles in a liquid metal and a variety of related processes using a static electromagnetic field and/or alternating electromagnetic field have been developed [1-4]. Among the processes, a range of electromagnetic effects have been realized which play key roles in determining the engineering of their applications. The physics of these effects are discussed in the following sections by considering different types of EM fields. In order to generate effective electromagnetic effects, the difference in physical/electromagnetic properties between the solid particles and the liquid metal needs to be significant [5,6]. As one of the consequences, the existence of the solid particles will directly influence the physical/chemical properties of the metal after solidification.

An imposed DC/AC current induces a perpendicular magnetic field providing a Lorentz force in a liquid metal. The Lorentz force on the liquid metal is always in the radial direction pointing inwards if a cylindrical conductor is considered (Figure 1). Since the Lorentz force attempts to compress the liquid metal, it is known as the “pinch effect”. When non-conductive particles are present, they will be collected at the wall by this effect [7]. The layer with accumulated particles presents distinct wear properties and graded metallic-based materials can therefore be prepared. In a current density of 4000 kA/ m2, the collection efficiency of 30 μm Al2O3 in liquid aluminum can reach 95% [9], indicating that it is a very efficient approach. However, the Lorentz force is rotational with the square of the current frequency and will generate secondary flows in the melt [9]. In another case, axisymmetric flows may be induced due to the non-uniformity of the radial pinch force when the imposed current is radically non-uniform in the cylindrical conductor. They are important factors to determine the particle distribution. A time-varying magnetic field generated in an induction coil can induce eddy currents and subsequently a Lorentz force on a liquid metal. This body force produces internal fluid motion without mechanical contact making “magnetic stirring” a well recognized process. The “skin depth” δ is one of the most important parameters to evaluate the AC magnetic field effects. It can be expressed as [10]

where μ the magnetic permeability, σ the electrical conductivity,

the angular frequency and f is the frequency.

If the magnetic field frequency is low (e.g. 10 Hz), the field can easily pass through the liquid melt because the skin depth (in cm range at 10 Hz) may be larger than the sample thickness. More often, travelling [11,12] or rotating [13] low frequency AC magnetic fields are used in the process of particle removal from liquid metals [14]. As shown in Figure 1 (c), the induced current provides the source for the Lorentz force on liquid metal with the magnetic field. The nonconductive particles are pushed to one side of the cylindrical tube and can be separated.

When the frequency is high (e.g. 10 kHz), the skin depth becomes very small (in mm range at 10 kHz) and may be much lower than the sample thickness. It means that the magnetic field is shielded from the interior of the metal and the induced current exists only in a thin surface layer. A strong stirring effect will be generated in the liquid metal which contributes to improve the homogeneity of the particle distribution and de-agglomerate the cluster of small particles.

Static Magnetic Field with or without a DC/AC Current

A static magnetic field suppresses the liquid metal motion not parallel to the magnetic field lines. This effect is named magnetic damping. When non-conductive particles are present, their migration is also interfered due to the damping in the liquid metal motion. Usually, a combination of a DC magnetic field with a DC current is applied to control the non-conductive particle distribution in liquid metals [15-17]. The DC current is generated between electrodes inserted in the melt [7], while the static magnetic field is applied with permanent magnets or electromagnets. The apparatus can be designed easily. Under the field, the melt experiences electromagnetic forces while a counteractive effect is stimulated on the non-conductive particles due to their nonconductivity [18]. The principle is shown in Figure 1. It has been found that particles of ~100 μm can be efficiently influenced and they can be collected to one side of the liquid metal in a short time [19]. However, it is hardly feasible to scale-up and it remains difficult to manipulate fine particles in the μm range. The generation of a magnetic field higher than 1 Tesla in a large volume remains difficult for conventional electromagnets and keeps the magnet at a temperature below the Curie temperature constitutes a significant technical problem [7].

With the development of superconducting technology, a magnetic field of 10 Tesla or more becomes easily attainable [20-25]. The advantage of increasing the magnetic flux density is that the magnetic Faraday force in a gradient field as well as the Lorentz with an imposed current can be significantly increased. The particles with a distinct magnetic property experience a different magnetic Faraday force from the liquid metal (Figure 1 (d)).

The magnetic Faraday force is expressed as

The Lorentz force is given by

where fL is the Lorentz force and J is the current density.

The principle is given in Figure 1 (d) and a difference in magnetic properties (magnetic susceptibility χ) is required in order to manipulate the particles [26]. With the magnetic Faraday force, early research on liquid alloys such as Al-Si alloys evaluated the induced migration and separation [26-28]. The migration time for an alumina particle with a diameter of 20 μm to travel 1 mm was evaluated to be less than 20 seconds under a magnetic field gradient product of around 10 T2/m [26]. However, the force has a comparable magnitude with the gravity force in a high gradient condition for alumina particles (for instance, a gradient product of 600 T2/m) and the manipulation efficiency of micrometer sized particles is very low [5,29].

Therefore, a DC current is usually combined by applying the Lorentz force to manipulate the small particles effectively [29]. The principle is the same as in a traditional DC magnetic field and a current. Detailed investigations have been given in [29] and the non-conductive particles experience the so-called electromagnetic Archimedes forces ( fpEA equation (4)). Alumina particle of 5 μm can be totally collected to one side of the liquid aluminum in 2 seconds in a 40 mm cylinder crucible [29]. The magnitude of the electromagnetic Archimedes force with a 10 T magnetic field and 1500 kA/m2 current can be more than 500 times larger than the magnetic Faraday force [29].

The electromagnetic Archimedes force is obtained as

where fpEA is the electromagnetic Archimedes force density, σM and σ P the electrical conductivity of the liquid metal and the nonconductive particle respectively.

Energy Efficiency and Benefits of Using a Strong Magnetic Field

When a current is coupled during particle manipulation from a liquid metal, the energy efficiency is another important factor to be considered. In traditional electromagnetic processes, the power is mostly consumed to heat the melt instead of separating the particles [7]. The Joule heating per unit volume is derived from

The induced driving force fpEA for particle removal can be obtained by equation (4). Therefore, the effective power spent on the particle migration is

where vP is the terminal velocity of a particle.

The terminal velocity is obtained from

where dP is the diameter of the particle, ηM,B is the viscosity of the liquid metal in a magnetic field (calculated in [6]).

By substituting equations (4) to (7), the effective power to promote particle removal is

The energy coefficient ϕ is defined as the ratio of the effective power WP to the Joule heating QJ , allowing to evaluate the energy efficiency of the process.

The dissipation energy due to the Joule heating is

where t is the electromagnetic field treatment time.

The two factors, magnetic flux density and particle particle size, are further considered. The calculated results are shown in Figure 2, revealing that the energy coefficient increases dramatically with the magnetic flux density. For particle size of 10 μm, the energy coefficient ϕ reaches around 1 which is much higher than in the conventional electromagnetic processes [7,8,30]. 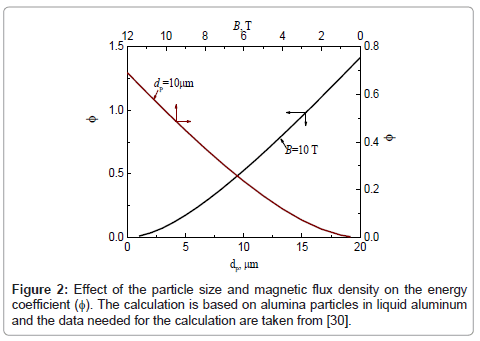 Figure 2: Effect of the particle size and magnetic flux density on the energy coefficient (f). The calculation is based on alumina particles in liquid aluminum and the data needed for the calculation are taken from [30].

The author acknowledges Prof. B. Blanpain, M. Guo, J. Vleugels and O. Van der Biest from KU Leuven for their suggestions and help. This paper was partially exposed in the magazine of Magnetics Technology International.