Non-Aqueous Titrimetric Assay for Determination of Loratadine in Pharmaceutical Preparations

Non-aqueous titrations is the most titrimetric procedure used in pharmacopoeial assays and serves a double purpose, as it suitable for the titration of weak acids and bases and provides a solvent in which organic compounds are soluble. A simple, cost-effective, rapid, and precise method for determination of loratadine (LOR) in pure and pharmaceutical dosage forms was developed. The method based on non-aqueous titration using acetous perchloric acid as a titrant and acetous crystal violet as indicator. All measurements are carried out by running simultaneous blank determinations and the final titer values are subtracted from blank to get actual amount of acetous perchloric acid equivalent to LOR. The method was successfully applied for determination of LOR in pure and some pharmaceutical preparations. The percentage recoveries of the proposed method were ranged from 84.8 ± 0.1% to 100.9 ± 0.1%. The method showed an acceptable precision and accuracy as it able to determine LOR in presence of the different excipients present in some commercial preparations without any significant interference. 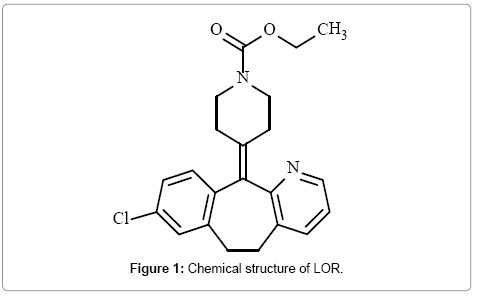 The aim of the present study was firstly, to find out a rapid method which could be conveniently used for the determination of the percentage purity of a weak bases and insoluble drugs such as LOR (pKa=5.0) in raw material and also in pharmaceutical preparations. Secondly, to discover again the old-fashion, robust, accurate and precise technique of non-aqueous titration, specially the quantitative determination in the concentration range of the developed procedure. A review outlined the previously reported quantitative volumetric and instrumentation methods for determination of LOR and other antihistaminic antagonists analogues was prepared by El-Kommos et al. [1]. The chemical reaction and titrimetric variables were studied and optimized on the basis of lower determined concentrations, temperature, and reagents consumption, and the results obtained by the proposed titrimetric method were comparable with those obtained by an instrumental reported method [5].

Preparation of perchloric acid and crystal violet solution: HClO4 (0.1M) was prepared in CH3COOH and standardized with potassium hydrogen phthalate [6]. Crystal violet (0.1% w/v) indicator was prepared by dissolving an appropriate amount of the powder in CH3COOH.

Prepartion of standard LOR solution: An accurately weighed 2.0 g of drug was carefully transferred into a 100 mL volumetric flask. The powder was dissolved in CH3COOH and then diluted to the mark with the same acid.

Preparation of LOR in its pharmaceutical dosage forms: Twenty tablets were accurately weighed and finely powdered and mixed thoroughly. The suspension and glycerin incorporated-LOR nanoparticles contents were evaporated gently on a hot plate until dryness. Accurately weighed amount of contents equivalent to 0.5 g was transferred to 25 mL volumetric flask and reconstituted in an appropriate volume of CH3COOH. The volume was diluted to the mark with the same acid, mixed well and filtered using a Whatman No. 45 μm filter paper. Further dilutions with CH3COOH were made to obtain sample solutions 2.0 to 20.0 mg/mL, and then the general analytical procedure was followed.

General analytical procedure: One milliliter of standard solution containing 2.0 to 20.0 mg/mL of LOR was transferred to a 50 mL dry conical flask and the volume was made up to 10 mL with CH3COOH. Two drops of crystal violet indicator were added and the solution was titrated with standard solution of HClO4. The end point reached when the color of indicator was converted from violet to faint blue. A blank titration was performed in the same manner and the necessary correction factors were done.

The amount of LOR in the measured aliquot was computed from the following formula:

Where, V=mL of the HClO4 consumed, MW=Relative molecular mass of LOR, M=Molarity of HClO4 and n=Number of moles of HClO4 reacting with each mole of LOR.

Non-aqueous titrations are widely used in the Pharmacopoeias for the assay of many drug substances based on the properties of the drug which is either weakly acidic or weak bases [7]. Herein in the developed titrimetric method, we achieved a rapid determination of LOR, not only in its convenient formulations (tablets and emulsions), but also in new glycerin incorporated-LOR nanoparticles; which were formulated to enhance the solubility of LOR in a new formulation, without any pre-extraction. The new prepared glycerin incorporated- LOR nanoparticles were checked by a laser light with an incident beam of 633 nm at a scattering angle of 90° using an instrument of Malvern Zetasizer nano 6.01 (Malvern Instruments GmbH, Herrenberg, Germany). The nanoparticles with a uniform Z average diameter 334 ± 76 nm (Figure 2) and polydispersity index of 0.253, which indicate the stability of prepared nanoparticles, moreover the homogeneity of their particle size in a suspension as a result of the particle size distribution falls within a narrow range of sizes [8-10]. 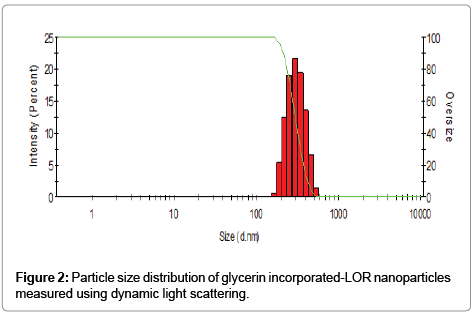 The proposed method was based on a neutralization reaction between the LOR (weak base) and acetous HClO4 (strong acid in CH3COOH). The amphiprotic property of CH3COOH rendered it the ideal solvent for non-aqueous titrations; this amphiprotic property related to its ability to donate and accepts protons [11] according to this equation:

When HClO4 is dissolved in CH3COOH, CH3COOH is forced to acts as a base and accepts a proton from HClO4 forming an onium ion [12]. The formed onium ion (CH3COOH2+) can very readily gives up its proton to reacts with LOR, so basic property of the drug is enhanced. The end point was detected easily with crystal violet as its color change from violet color to faint blue color.

All results were expressed as percentages, with representing the number of values.

Precision and accuracy: The precision of the method was calculated in terms of intermediate precision (intra-day and inter-day). Three different concentrations of LOR were analysed in seven replicates during the same day (intra-day precision) and five consecutive days (inter-day precision). The percentage relative standard deviation (RSD, %) values were ≤ 2.3% (intra-day) and ≤ 4.1% (inter-day) indicating high precision of the method. Also, the accuracy of the methods was evaluated as percentage relative error (RE, %) and from the results shown in Table 1, it is clear that the accuracy is satisfactory (RE ≤ 15%).

Application of the proposed method: Successfully the present method was applied to quantify LOR in its tablets, suspensions, and glycerin incorporated-LOR nanoparticles (Table 2). The obtained results were statistically compared with those of a reported method [5] by applying the Student’s t-test for accuracy and F-test for precision. No-significance differences obtained between proposed and reported methods at 95% confidence level with respect to precision and accuracy. To confirm the validity of the proposed method, a recovery experiment was performed via standard addition procedure. To a constant and known amount of LOR in powder, tablets (20 mg content of LOR) and/ or suspension (before the evaporation step), pure drug was added at three levels, 50, 100 and 150% of the level present in the dosage forms, and the total was measured as five separated determinations without interferences in the assay from the other excipients present in the formulations as indicated in Table 2.

*No published method for determinations of glycerin incorporated-LOR nanoparticles, without extraction

The proposed non-aqueous titration method is simple and costeffective for the determination of LOR (or other structurally analogues) in pure and commercial preparations. The direct and wide range of applicability of the developed method for routine quality control using is well established by the assay of LOR in pure and different pharmaceutical formulations. Omission of LOR insolubility or an extraction step with the organic solvents is an added merit for our proposed method.

Copyright: © 2016 Hamd MAE, et al. This is an open-access article distributed under the terms of the Creative Commons Attribution License, which permits unrestricted use, distribution, and reproduction in any medium, provided the original author and source are credited.