Copyright: © 2015 Vemuri RS, et al. This is an open-access article distributed under the terms of the Creative Commons Attribution License, which permits unrestricted use, distribution, and reproduction in any medium, provided the original author and source are credited.

Chemical and biological warfare agents (CBWAs) are highly toxic compounds. Safe and effective ways of detection and neutralization is very important with reference to human life and environment. In this article, we present a brief outline on various engineered porous materials developed for detection/destruction of CBWAs.

Chemical and biological warfare agents (CBWAs) such as nerve gas agents (HD, GD, VX), staphylococcal enterotoxin B, Clostridium botulinum toxin and bacillus anthracis spores (anthrax) pose a significant threat to mankind [1]. Real-time and compact sensors for the detection of CBWAs have attracted increasing attention and remain challenging. Also, proliferation of plastic explosives (which are difficult to detect) is making conflicts in unstable regions across the globe, very deadly. It is imperative to develop science and technology to counter these threats by detecting and neutralizing CBWAs efficiently, as well as designing personal protective equipment. The grand scientific challenges in the detection and neutralization of CBWAs are multifold and are specific to the chemistry, molecular topology and size of the CBWA molecule.

Understanding the interfacial chemistry and reaction pathways of CBWAs on various heterogeneous materials were studied previously [2-4]. Following the initial studies into the chemistry of CBWAs on the surfaces, extensive research has been dedicated toward developing an understanding of the CBWAs and their simulants on various heterogeneous surfaces such as transition metal oxides, activated carbons and zeolites [5-7]. Though these porous materials exhibited desirable characteristics for detection and destruction of CBWAs, the lack of tailorability and low sorption capacity of these materials emphasized a need for finding better suitable materials that provide required functionalities for detection and destruction of CBWAs.

A new class of Nano porous materials developed in the last decade called metal-organic frameworks (MOFs) have unique and outstanding properties such as the largest pore volumes and highest surface areas known [8-13]. Because of the large selection of metal ions with various coordination geometries and the possibility of larger number of organic linkers, immensely diverse range of MOF framework architectures were reported in the literature. MOFs have received significant interest in the fields of chemical, biological, and material sciences because of their suitability for many applications including host materials for molecular separation, [14-17] gas storage [18-20] carbon capture [21- 23], heterogeneous catalysis, [24] molecular sensing, [25,26] toxic gas filtration [27-30] and very recently considered as potential materials for the detection and decomposition of nerve gas agents and detection of explosives [31-33]. A few examples of typical MOF structures are shown in (Figure 1). The tunable nanoporosity of MOFs places them far ahead of zeolites and other metal oxides. Through both computational and experimental studies, it was shown that MOF are capable of sensing and capturing small and large molecules, through their functionalized pores and large interaction volumes [26,34,35]. Hypothetically, these MOFs show superior advantages in detection and destruction of CBWAs because of:

3) Pore size engineering on the scale of nano, meso, and microscale to accommodate complex CBWA molecules for detection and neutralization.

5) Stability in multitude of chemical and thermal environments.

Real-time and compact sensors that are both highly sensitive and selective remain a critical need for detecting explosives and monitoring personal exposure to biological and chemical agents. In this regard, several researchers have evaluated MOFs as luminescent detectors for nitro aromatic explosives reference [36,37]. A guest molecule activity at the active site of the host MOF through the pore structure of the MOF generates a change in luminescence. This principle can be exploited for sensing the nitro aromatics and DMNB (dimethyl dinitrobutane) taggant for the plastic explosives. Lan et al. demonstrated the highly luminescent MOF, [Zn2(bpdc)2-(bpee)] for the detection of trace explosives in the vapour phase with 84% fluorescence quench efficiency [38] . They reported vapour phase trace amounts of DMNB at 2.7ppm and Dinitro toluene (DNT) at 0.18 ppm detected within 10sec. Also, the redox quenching of fluorescence is highly reversible. This technique is reported to be very efficient method for the detection of nitro aromatics and plastic explosives. Very fast responses and high sensitivity towards the representative nitro aromatic explosive, DNT (dinitrotoluene), and the plastic explosive taggant, DMNB (2, 3-dimethyl-2,3-dinitrobutane) were observed. Using the same concept, Shi et al. prepared two luminescent Zn (II) MOFs from π-conjugated thiopene - containing carboxylic acid ligand for the detection of nitro aromatics. Notably, the MOFs synthesized exhibited high selectivity for the detection of picric acid. Similarly, Xie et al. synthesized and functionalized a porous carbazole-based luminescent MOF, NENU-522 by doping Ln3+ ions achieving white light fluorescence [39]. They found that Tb3+ encapsulated in NENU-522 to be a highly selective and recyclable fluorescent indicator for the qualitative and quantitative detection of nitro aromatic explosives with different numbers of −NO2 groups. The MOF showed complete quenching at about 2000ppm, 1000ppm and 80ppm for Nitrobenzene, 1,3-Dinitrobenzene and Trinitrophenol (TNP) respectively. It is interesting to note that the integration of white light fluorescence with sensing capability leads a way for quick realization of MOF based sensor technology for the detection of explosives.

Researchers from Sandia National Laboratory and Georgia Institute of Technology used the extremely high sensitivities of Micro Electro Mechanical devices (MEMS) coupled with the high selectivity of MOFs to develop MOF-Functionalized Microcantilever devices for rapid and selective species chemical detection. They demonstrated the concept of stress induced chemical detection using MOFs by integrating a thin film of the MOF HKUST-1 with a microcantilever. They found that microcantilevers with MOF coatings can lead to exceptionally responsive, reversible, and selective microcantilever sensors. The synthetic versatility of these MOF based nanoporous materials hold great promise for creating recognition chemistries to enable selective detection of a wide range of analytes. On the other hand, researchers at the University of Texas at San Antonio and Zhejiang University developed a synthetic molecular recognition platform by functionalizing the pores of different MOF materials. Although their research focused on functionalizing MOF materials for detection of small molecules, the method of functionalizing MOF pores opens the possibility of using MOFs for biological and chemical agent detection.

The critical problem in neutralization of nerve gas agents is hydrolysis of phosophoestrate bond. Naturally occurring phosphotriestrate (PTE) enzyme found in Pseudomonas diminuta, Flavobacterium, Agrobacterium radiobacter, and Chryseobacterium balustinum bacteria, known to be highly active in hydrolysis of phosphate ester bonds [40]. The Zn (II) metal ions in the enzyme cleave the P-O bonds. Inspired from the hydrolysis of phosphoester bond by PTE enzyme, Katz et al. synthesized Zr based biomimetic MOF, UiO- 66 and successfully demonstrated the hydrolysis of the phosphoester bond in the nerve gas agents. The authors showed UIO-66 is exceptionally active and selective for hydrolysis of methyl paraoxon and p-nitrophenyl diphenyl phosphate (PNPDPP) and the Zr-OH-Zr node in UiO-66 functionally mimicking the binuclear ZnII active site of the phosphotriesterase enzyme. The UiO series of MOFs is defined by the octahedral [Zr6O4 (OH) 4]12+ secondary building unit, which is 12-coordinated to 1, 4-benzene dicarboxylate (bdc2-) ligands in UiO- 66 [41,42]. These materials are attractive as solid catalysts due to their easy synthesis, high thermal and mechanical stability. A key issue in exploiting MOFs for the hydrolysis of chemical warfare agents has been that their pore apertures have been too small to admit nerve agents to the interior spaces where the vast majority of potential active sites are located. Without the access to the interior of the MOF pores, nearly all of the sorptive capacity and resultant hydrolysis activity was restricted to sites on the exterior of the MOF crystallites; which significantly reduced the efficiency of the chemical warfare agent destruction. In some cases, specifically with UiO-66 MOF, the most effective reaction sites are already occupied by linkers.

To overcome these challenges, Nunes et al. studied UiO-67 MOF (Figure 2 (a)) synthesized using a biphenyl ligand that showed to hydrolyse the phosphoester bond in organophosphate simulant Sodium para-nitrophenylphosphate (pNPP - less toxic than nerve gas agent soman) [42]. The reaction schematic is illustrated in (Figure 2 (b)). A solution of pNPP was filtered through a filter made of UIO-67 which showed > 90% of pNPP was hydrolyzed to pNPh. Very recently, Mondloch et al. evaluated Zr6-based MOF NU-1000 (Figure 3) which is built up from eight (rather than twelve) connected Zr6.(μ3-O)4(μ3- OH)4(H2O)4(OH)4 nodes and tetratopic 1,3,6,8 (p-benzoate) pyrene linkers (TBAPy4-) [33]. The resulting structure directs a total of four terminal-zirconium-ligated aquo and hydroxo groups per node into exceptionally wide (31 Å) channels, and a further four into smaller 10Å channels (versus zero for defect-free UiO-66). The ultrawide channels allow bulky phosphate ester molecules to permeate the entire framework, including the vast MOF interior, thereby improving the efficacy of chemical warfare agent destruction. The NU-1000 is shown to be 3 to 30 times faster than UiO-66 MOF in hydrolyzing the phosphoester bonds. The nerve gas GD and its simulant molecule DMNP (Dimethy 4-Nitrophenyl Phosphate), both were hydrolyzed by NU-1000 at a rate 200 times faster than Cr based MOF MIL 101 and 1500 times faster than HKUST-1. Also the dehydrated NU-1000 was more effective than NU1000. The computational and experimental analysis suggests that the extraordinary activity of the NU1000 and NU-1000 dehydrated is attributed to unique eight cornered Zr6 (μ3- O)4 (μ3-OH)4 (H2O)4 (OH)4 node and weak intermolecular interaction that direct orientations between substrate molecule and catalyst linker components, favorable energetics, and mesoporsous channels that allow substrates access to highly acidic Zr (IV) sites [33]. 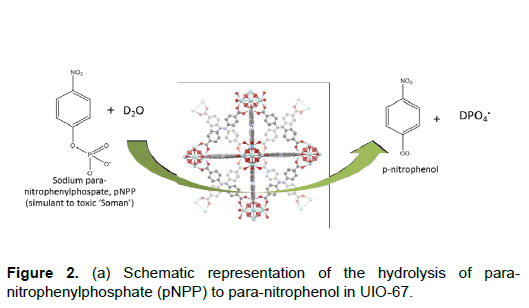 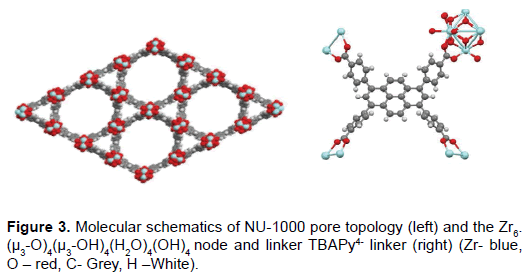 In conclusion, nanoporous MOF materials with well-defined molecular building blocks showed extremely promising characteristics over other porous materials. Although, there is still a significant amount of work to be done in detection and destruction of CBWAs, with the virtue of porosity in MOFs with tunable characteristics, we anticipate these engineered porous solids open the door towards effective sensing and efficient catalysis for the degradation of chemical and biological warfare agents and their simulants.

PNNL is operated by Battelle for the U.S. Department of Energy under Contract DE-AC05-76RL01830.