Object Removal and Filling by DWT Based Inpainting Technique

Inpainting is the art of modifying an image in a form that is not detectable by an ordinary observer. There are numerous and different approaches to tackle the inpainting problem. The inpainting technique can be classified into two categories: (1) texture oriented and (2) structure oriented. Both the technique have their advantages and disadvantages. Wavelet transform has been used for various image analysis problems due to its nice multi-resolution properties and decoupling characteristics. We propose to utilize the advantages of wavelet transforms for image inpainting. A number of examples on real and synthetic images demonstrate the effectiveness of the algorithm. Unlike other inpainting algorithms, we can expect better global structure estimation of a damaged or target region in addition to shape and texture properties

The filling-in of missing region in an image is known as Image Inpainting. Inpainting is the art of modifying an image or video in a form that is not easily detectable by an ordinary observer. Image Inpainting has become a fundamental area of research in image processing. The modification of images in a way that is non-detectable for an observer who does not know the original image is a practice as old as artistic creation itself. Medieval artwork started to be restored as early as the renaissance. The motive was simple, to bring medieval pictures, ‘up to date’ as to fill any gaps. This practice is called ‘retouching’ or ‘inpainting’[9].

This paper demonstrates a novel algorithm for removing large objects from digital photographs and replacing them with visually plausible backgrounds. Fig. 1 shows an example of this task, where the foreground tower (manually selected as the target region) is automatically replaced by data sampled from remainder of the image. The process of inpainting can be graphically represented as shown in fig.2.The input to the algorithm is an image to be inpainted i.e. painted image. The user selects the region to be inpainted i.e. the target region. Then the algorithm proceeds filling the target region with features around it. The output is an inpainted image. 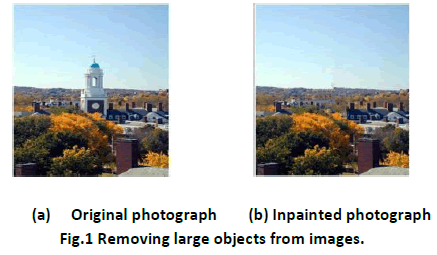 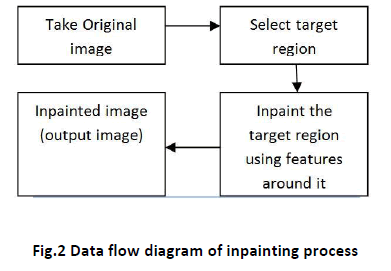 The conventional schemes that are proposed for image inpainting can be divided into two categories:

Several researchers have considered texture synthesis as a way to fill large image regions with ‘pure’ textures-repetitive two dimensional textural patterns. This approach effectively generates new texture by sampling and copying color values from the source [9]. Though the techniques of texture synthesis are effective, they have difficulty in filling holes in photographs of real world scenes consisting of composite textures. However, the structure- oriented scheme obtains the missing region by propagating linear structure into the target region via diffusion. They are inspired by the partial differential equations. Their drawback is that the diffusion process introduces some blur, which becomes noticeable when filling larger regions.

M. Bertalimo is one of the legendary names in the field of Image Inpainting, proposed a simple algorithm (2000) where filling in the missing region is carried out by the property of Isophotes(lines of equal gray value) [6]. Also soon after this in 2001 Chan, Shen and coworkers proposed a variation model for filling in gray level and color images. Later Mumford-Shah model in 2002 has been adopted for good obtaining good approximations from mathematically neat image modeling. These proposed algorithms were structure oriented. These algorithms were able to keep good continuation smoothly however, broken edge estimation with large gap could fail and detail texture surface is not easily reproducible. Again in 2003 Bertalimo proposed to decompose each original image into two separate component images of different characteristics. One of them is processed by texture-oriented scheme and the other by structure-oriented one. In 2007 Ching and coworkers proposed an algorithm using wavelet. This algorithm could be applied to highly lose image. Also in 2008 Wong proposed nonlocal means approach for exemplar based Inpainting algorithm. The image patch is inferred by nonlocal means of a single best match patch. Also simultaneously Dongwook Cho, and Tien D. Bui in 2008 showed the use of advantages of wavelets to Image Inpainting [12]. The technique presented in this paper uses the advantages of wavelet transform for image inpainting.

Paper outline: Section II presents the main idea of this algorithm. The details of proposed algorithm are described in section III. Finally, a gallery of results on both synthetic images and real scene photographs is presented in section IV.

The target region (damaged or lost data or object to be removed) information of the image can be divided into two kinds of conditions. The first class, the distribution of the target information of the image is the local and concentrated. So the decision method of the image repair can depend on the characteristic and direction of the neighboring textures to decide. The second class, the distribution of the image target part is global and dispersion. Therefore, we can't clearly repair the repair image through the consult data of the neighboring district. . In the active areas, the image data is more localized in the spatial domain, while in the smooth areas, the image data is more localized in the frequency domain. With traditional transform coding, it is very hard to reach a good compromise.

To solve the problem, using the mankind's vision characteristic which is the basis of the repair. When the reference data shortage to repair the image, we zoom-out the distorting image can observe the image shape. Actually in the image processing, we use the down-sampling method to reach the visual effect. For the wavelet transform, the coefficients at the course level represent a larger time interval but a narrower band of frequencies. This feature of the wavelet transform is very important for image coding.

2) Convert the color image to YCbCr by using conversion formulae.

I. Apply n-level wavelet transform (we have applied 2-level).

7) Finally we get inpainted image.

In the human's vision, the texture composition of the color image has the important contribution. For repair the texture composition, we proposed the global and the multi-frequency method using wavelet transform to reconstruct the image. According to this concept, the repairing method must to decide the initial layer of the repairing pixel. When the layer number n be reduce by one which mean carrying out the 1-level inverse discrete wavelet transform (IDWT), the layer exists its relative sub-band n LL . We must calculate the relative amount of the valid pixels of the original image that exists around the target pixel included in the n LL. If the any pixel exists in the LL layer which relative the amount of the valid pixels is to satisfy the following equation, and the pixel in the n LL will start being repaired in this layer.

Where N Vp n , is the total number of the valid pixel in the layer n. In another condition,

The repair procedure of the pixel (i,j) will not carry out under the layer n. But the opposite pixel of the pixel (i,j)will be checked whether handle the repair procedure after the next layer by the IDWT. We use the different size of the damage block to explain which damage block should be repaired in which layer. If we decided the initial repair in which layer, after we must to decide how to repair the image. So we according to the characteristic of the tree structure of the wavelet domain decide the repairing coefficients [1], shown as the fig. 5. The tree structure includes the different repairing method of the four components (Mean, Vertical Branch, Horizontal Branch and Diagonal Branch). According to separate the idea of the repair, we consider the pixel value of the different direction to handle the repair procedure. The repair of the MEAN composition influence the shapes of the object therefore us consider the whole of the bigger area. Besides, the repair method of the directional branch will consider its corresponding directional reference coefficient. The best similar pixel search which using calculates the energy of the differential pixel by the following equation: 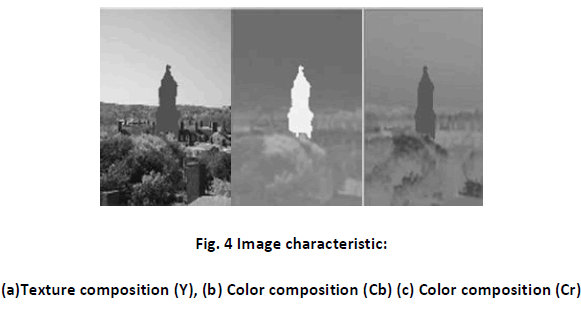 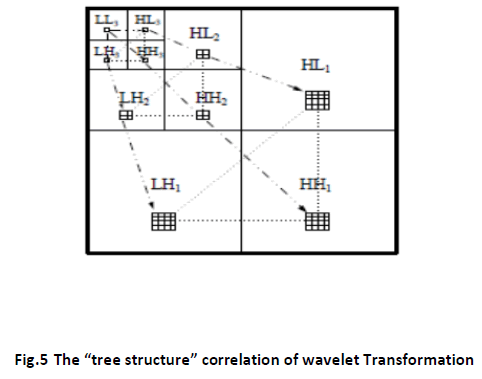 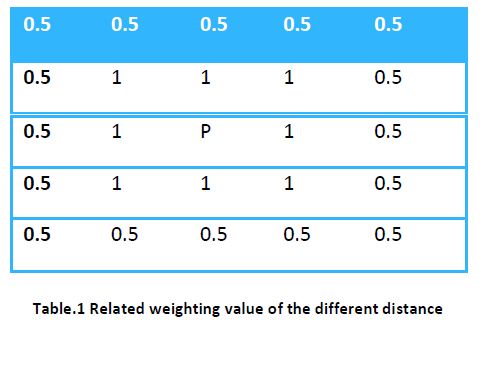 The algorithm makes use of the color composition of the image that have the regional characteristic. The proposed repair method defines different weighting values that consider the relating distance from the repair target P. If the most neighbouring district exist more than two reference pixel value, we will only consider the most neighbouring district pixel value to repair image. But if the reference pixel is not exists anyone or just only one, we must extensive the distance of the consideration [1]. Using this concept, we proposed the revised method of the linear interpolation for the color restoration repair method. The new linear interpolation function as the following equation (7) & (8).

The algorithm can be applied to a variety of images ranging from purely synthetic images to full color photographs that includes complex textures. All the experiments are performed on a 2.5GHZ Pentium IV with 1GB of RAM. The performance of the Wavelet based algorithm can be evaluated by considering the parameters like PSNR and the time required to inpaint the image. Also by looking at the figure and the respective table one can decide the required Wavelet packet. 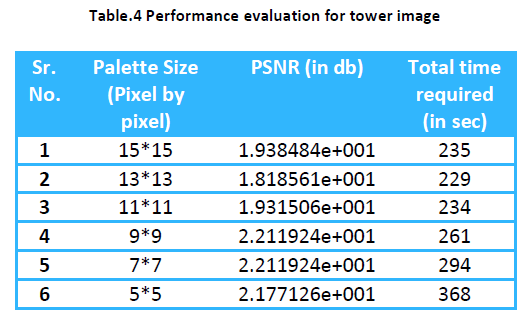 The Wavelet based approach is used removing large objects from digital photographs. The technique is capable of propagating both linear structure and two-dimensional texture into the target region with a single, simple algorithm. A simple selection of the fill order is necessary and sufficient to handle robustness changes in shape and topology. The other advantages of the algorithm are: (i) preservation of edge sharpness, (ii) no dependency on image segmentation and (iii) balanced region filling to avoid over-shooting artifacts.