Copyright: © 2017 Kataria H, et al. This is an open-access article distributed under the terms of the Creative Commons Attribution License, which permits unrestricted use, distribution, and reproduction in any medium, provided the original author and source are credited.

Purpose: To study the pattern of vascular insufficiency in patients with Diabetic foot using Ultrasound Color Doppler (UCD) and Computerized Tomographic (CTA) Angiography and determine its association with clinical outcome.

Material and methods: This prospective study was conducted at tertiary care institute recruiting patients >18 years of age with diabetic foot having serum creatinine <1.2 mg/dl and blood urea <40 mg/dl. Diabetic foot patients who have previously undergone revascularization surgery were excluded from the study. Ultrasound parameters like color, flow, calibre, plaque, peak systolic velocity, pulsatility index, resistance index was studied in lower limb vessels and CTA was deployed to know the exact level and extent level of occlusion, calcification and presence of collaterals. Clinical outcome was studied in terms of admissions, minor and major amputations and mortality.

Results: There were 65 patients (130 limbs; mean age: 58.49 ± 11.04 years) with male predilection (83.08 %). On UCD, the above knee arteries had predominantly good color and triphasic flow while broadening of the spectrum and monophasic flow was seen in below knee vessels. Dorsalis pedis artery had the lowest peak systolic velocity (58.44 ± 39.59 cm/s) and resistance index (0.82 ± 0.31). Atheromatous plaques were predominant in all vessels. On CTA, occlusion was seen more in the posterior tibial artery (n=40/130) while calcification was predominant in the femoral artery (n=59/130). Collaterals were present in 36.9% limbs. On logistic regression, low resistance index and biphasic flow of dorsalis pedis artery on UCD and calcification in the peroneal artery CTA could predict high rate of minor amputations.

Conclusion: Involvement of infrapopliteal vessels especially the involvement of dorsalis pedis and common peroneal artery could have a bearing on the rate of minor amputations.

Diabetes is one of the leading causes of dialysis, blindness, and amputation worldwide. The global number of diabetic patients in year 2000 was 171 million individuals; the number is expected to grow to 366 million in the year 2030 [1]. Diabetic complications may be disabling or even life threatening [2].

Diabetic foot is a long-standing diabetes complication in which infection, ulceration, and/or necrosis of tissues of the lower limb occurs, owing to presence of neuropathy and peripheral artery disease as basic etiological factors [3]. The foot ulcer incidence rate ranges between 2% and 10% among patients with diabetes mellitus [4]. According to various studies, there is 15-46 fold higher Lower Limb Amputation risk (LLA) in diabetics as compared to general population [5]. Furthermore the diabetic foot expenses absorb about 15% of overall hospital budget for diabetes [6].

Peripheral Artery Disease (PAD) is a contributing factor to the development of foot ulcers in up to 50% cases and there is increased risk of amputations and hospitalisation with increasing severity of infection [7,8]. It commonly affects the tibial and peroneal arteries of the calf. Ultrasound Color Doppler method is valuable, non-invasive tool that may provide good information about the anatomy and physiology of the vessels. Computed Tomography Angiography (CTA) provides higher resolution and can scan the entire volume quickly. It helps in knowing the exact level and extent of arterial blockage but is costly.

There are few studies in literature which have compared the vascular insufficiency patterns on the two modalities and simultaneously correlated it clinically. Therefore, we assessed the pattern of vascular insufficiency in patients with diabetic foot with Ultrasound Color Doppler and CT Angiography and its association with clinical outcome.

It was a prospective observational study conducted in Department of Surgery from January 2015 to May 2016 in collaboration with Department of Radio-diagnosis at tertiary care institute, recruiting patients >18 years of age with diabetic foot having Ankle Brachial Index (ABI) <0.9. Informed consent was taken from all the patients. The study followed the Declaration of Helsinki guidelines and was approved by the Institutional Ethics Committee. The patients who had having serum creatinine >1.2 mg/dl and blood urea >40 mg/dl, previously undergone revascularization surgery or Burgers disease were excluded. All the patients underwent detailed history and clinical examination including evaluation of palpable pulses and Ankle Brachial Index (ABI).

The patients were followed up every month for three consecutive months and assessment was done for clinical outcome in terms of admissions, minor or major amputation and mortality.

Color and flow pattern: All the arteries predominantly showed good color but the percentage of speckled and spectral broadening color pattern increased in the infrapopliteal vessels as shown in Table 1 and Figure 1. Normal triphasic pattern of spectral waveform was observed more in proximal vessels. Biphasic and monophasic flow became prominent in infrapopliteal vessels with biphasic flow becoming the predominate pattern in posterior tibial artery and dorsalis tibial artery as shown in Table 2 and Figure 2.

Table 1: Color pattern of various vessels on US Doppler.

Table 2: Flow pattern of various vessels on US Doppler. 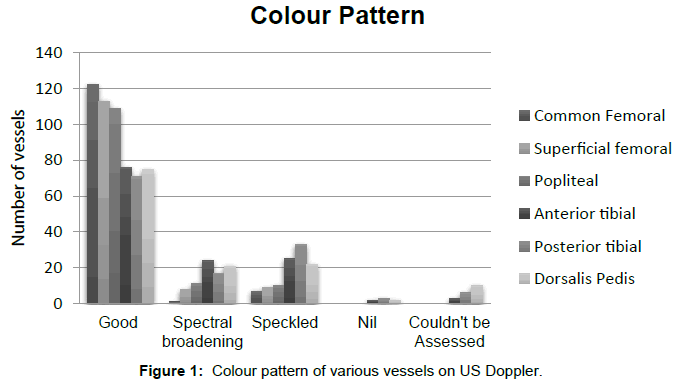 Figure 1: Colour pattern of various vessels on US Doppler. 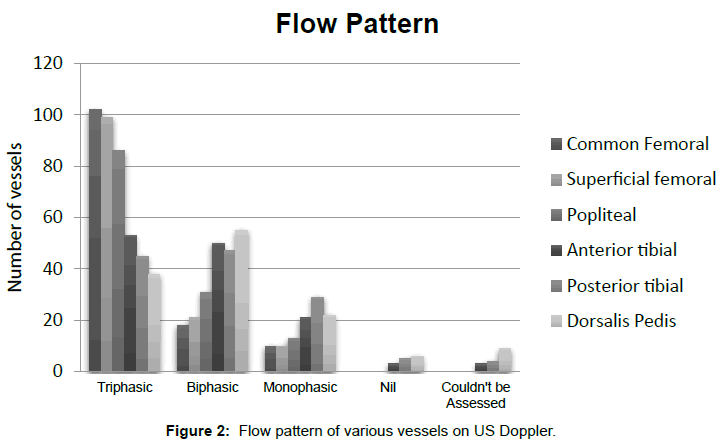 Figure 2: Flow pattern of various vessels on US Doppler. 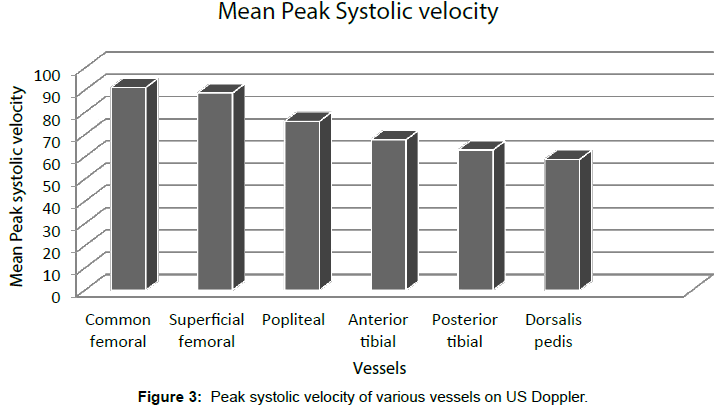 Figure 3: Peak systolic velocity of various vessels on US Doppler. 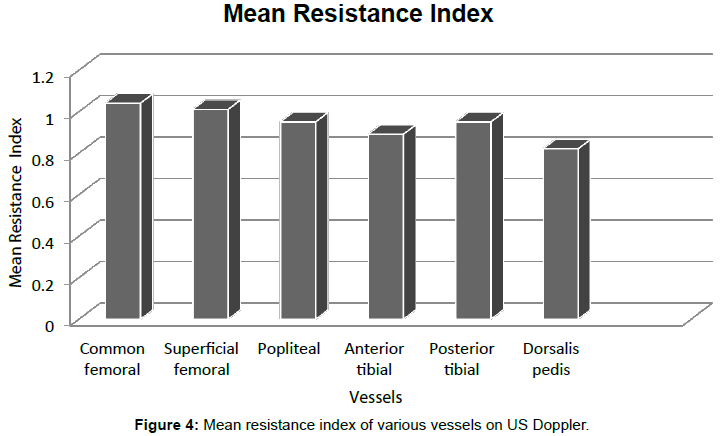 Figure 4: Mean resistance index of various vessels on US Doppler. 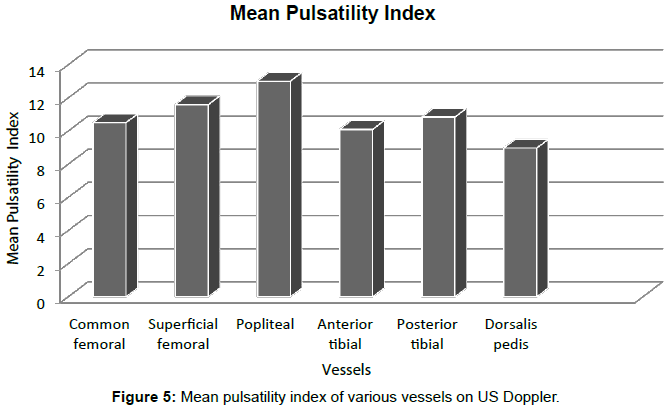 Figure 5: Mean pulsatility index of various vessels on US Doppler.

Plaque characteristics: There were broadly 4 characteristics of plaque- Intimal thickening, Atheroma, Calcification or thrombus. Plaque involvement was more common in below knee vessels. Calcification was more common in anterior and posterior tibial arteries whereas thrombus was most common in common femoral artery (Table 3 and Figure 6). Multiple lesion plaques were more common than single lesion plaques in all vessels and maximum in superficial femoral artery (Figure 7).

Table 3: Plaque characteristics in various vessels on US Doppler. 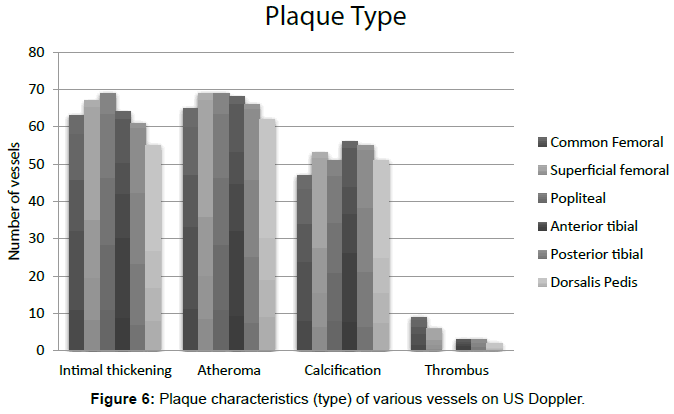 Figure 6: Plaque characteristics (type) of various vessels on US Doppler. 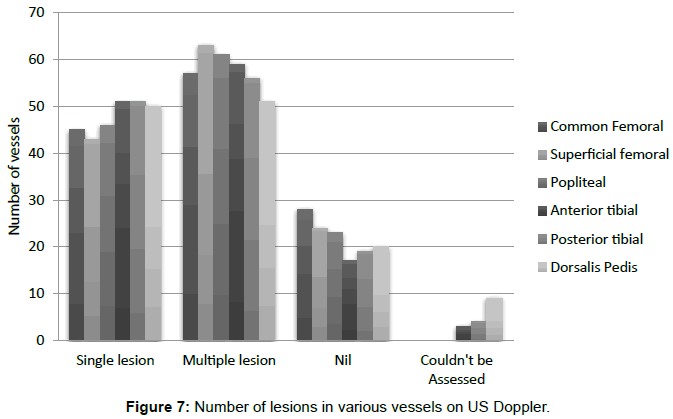 Figure 7: Number of lesions in various vessels on US Doppler.

All 65 patients underwent CT angiography. There was no occlusion in 68 limbs. 36 limbs had single vessel occlusion whereas occlusion was found in multiple vessels in 26 limbs. In our study none of the patients had all vessel occlusion. The pattern of occlusion on CTA is tabulated (Table 4).

Table 4: Pattern of occlusion of vessels as seen in CT angiography. 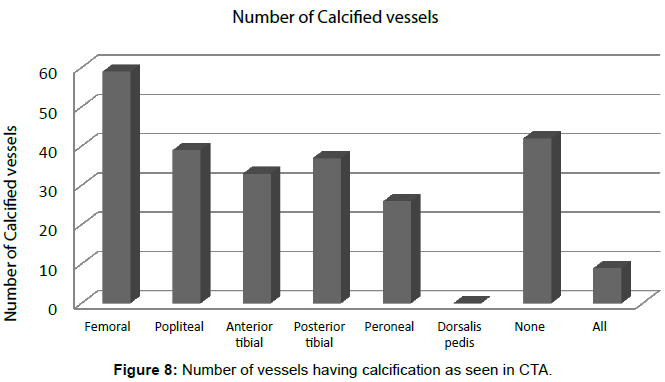 Figure 8: Number of vessels having calcification as seen in CTA.

Collaterals: With the help of computed tomographic angiography, collaterals were visualized in 48 limbs (36.9%).

Predictive risk factors on USG Doppler and CTA for outcome

Since there were lot of variables on USG and CTA which had shown statistically significant association with outcome measures, we performed logistic regression analysis to see factors that could predict the risk of outcome measures.

Number of patients who were admitted to hospital at 1st, 2nd, 3rd month or who died or underwent major amputations during the follow up period were less for any statistical analysis. Patients undergoing minor amputations had statistically significant association with resistance index (p ≤ 0.001) and flow pattern of dorsalis pedis artery (p≤0.001) on US Doppler and calcification in peroneal artery on CT angiography (p=0.01).

Diabetic foot is particularly important in the underdiagnosed and untreated diabetic Indian population. Papanas et al. suggested that in the face of the large patient numbers and the complexities of diabetic foot lesions, treatment should be promptly offered [9]. The therapeutic strategy should include same-day evaluation of infection and ischemia and ideally, urgent initiation of treatment including revascularization. Precise, comprehensive imaging of the arterial circulation is the cornerstone of successful revascularization of the ischemic extremity in patients with diabetes mellitus.

The earliest signs (grey scale) of atherosclerotic disease are thickening of intima and media followed by wall changes (luminal narrowing and soft or hard plaques) and turbulence & flow irregularities on color Doppler flow images [16]. In our study, plaque variants intimal thickening and atheroma were more common in popliteal (18.21% and 17.29% respectively) and superficial femoral arteries (17.68% and 17.29% respectively). Calcifications were more common in anterior and posterior tibial arteries (17.89% and 17.57% respectively). Das et al. in their study stated that femoral artery was the most common site of plaque deposition. Luminal narrowing with irregular concentric wall calcifications was most commonly found in dorsalis pedis arteries and anterior tibial and posterior tibial arteries were the most commonly involved arteries showing luminal narrowing with concentric wall calcifications [15]. Turini et al. did a comparative study of Digital Subtraction Angiography (DSA) and duplex sonography using a shortened Color Doppler Study (CDS) protocol and found 13 plaques in proximal superficial femoral artery on DSA and 8 on CDS in a study of 67 patients [17].

When the occlusion was defined according to length of segment involved i.e., >10 cm, between 5-10 cm and <5 cm it was found that all the types of occlusion were commonly found in posterior tibial artery. According to Graziani et al. the prevalence of occlusions of length longer than 10 cm was significantly higher in distal vessels as compared to proximal segments. Occlusions longer than 10 cm represented 50% of all lesions in below-the-knee arteries, but only 11% in the femoral segment. A higher prevalence of occlusions as compared to stenoses was found in both the anterior tibial and posterior tibial arteries but not in the peroneal artery, the prevalence being 66%, 84%, 42%, respectively [18]. Fagila et al. observed that risk of major amputation increased significantly when complete occlusion was present in popliteal and infrapopliteal arteries [19].

Association between US Doppler and CTA parameters with clinical outcomes

Vasculopathy is a strong risk factor in the development of diabetic foot lesions. The etiology of numerous complications of diabetes commonly includes micro and macroangiopathic changes. Since there were lot of variables on US Doppler and CTA which had shown statistically significant association with outcome measures, we performed logistic regression analysis to see factors that could predict the risk of outcome measures. In our study, there was significant association of minor amputation with resistance index and flow pattern of dorsalis pedis on US Doppler and calcification in peroneal artery on CTA.

Peripheral arterial disease is an independent baseline predictor of the non-healing foot ulcer and along with progressing infection continues to be the main reason for lower extremity amputation. Although the intact foot may withstand markedly reduced skin perfusion, an ulcerated lesion requires a greatly enhanced blood flow to heal; therefore, many ulcers fail to heal where critical ischaemia exists [21].

In study by Ismail et al. Doppler ultrasound has a high diagnostic yield in depicting abnormalities in patients with clinical features of peripheral arterial disease. Femoro-popliteal and below the knee arteries were commonly involved by these abnormalities. Significant luminal stenosis, total luminal occlusion and loss of arterial resistance were the most frequent findings, constituting 29%, 26.9% and 7.7%, respectively [22].

Shaheen et al. also concluded that the dorsalis pedis artery was the commonest site of involvement. The insufficiency was moderate with a biphasic flow pattern in most of cases [13]. Guzman et al. reported an increased amputation risk in 118 patients with PAD and high tibial artery calcification score. Huang et al. observed that the lower extremity arterial calcium scores are associated with disease severity and outcomes, including amputation, in patients with symptomatic peripheral artery disease, even after conventional risk factor adjustment [23,24].

Though there were limited number of patients and short follow up in our study, involvement of infrapopliteal vessels i.e., low resistance index and biphasic flow pattern of dorsalis pedis artery on US Doppler and calcification in peroneal artery on CT Angiography have a bearing on rate of minor amputations.