Fuel cell is a device which is used to produce chemical energy into electrical energy. Proton Electrolyte Membrane fuel cell (PEMFC) was not polluting the environment and it has high efficiency. PEM fuel cell, in addition to electricity, water and small amount of heat are generated as by-products. This generated water on cathode side blocks the flow paths and reducing electrochemical reactions. So the low electrochemical reactions will affect the performance of fuel cell. To increase the performance of fuel cell, we can change the flow parameters and flow field design. A 3D model of new flow field channel has been designed with 25 cm2 active area with SOLID WORKS 2008. The solid model has been analyzed with ANSYS 14.5 software. Numerical values of PEMFC were obtained with ANSYS FLUENT 14.5. Comparison has been made for power density of new flow field design with power density of serpentine flow field design.

Fuel cell is an electrochemical cell that converts the chemical energy from a fuel into electrical energy by electro chemical reaction of hydrogen fuel with oxygen or other oxidizing agent. Fuel cells consist of Anode, Cathode and Electrolyte. At anode the catalyst causes the fuel to oxidation reaction it generates protons and electrons. The protons flow from anode to cathode through the electrolyte after the oxidation. But the electrons resist by electrolyte and its flow through external circuit. It produces the electricity. Fuel cells produce small amount of potentials about 0.7 Volts. So fuel cells are stacked or connected in series. Energy efficiency of fuel cell is normally obtained at 40%-60% (Figure 1) [1,2]. 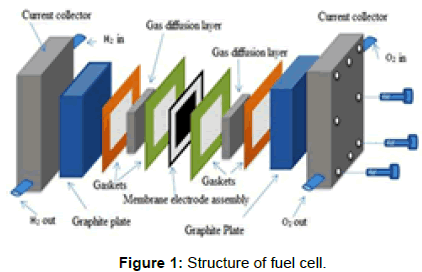 Lakshminarayanan et al. investigated the interdigited model in ANSYS 14.5 software packages with different landing to channel width. At L*C – 2:2, the optimum power density is 0.4086 W/cm2 obtained with the temperature of 323 K, voltage is 0.55 and the pressure is 2 bar. Because same L*C width size [4].

From the literature survey, the proper flow field design will increase the efficiency of PEMFC and it provides a water management at cathode side. 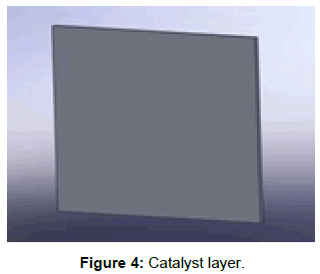 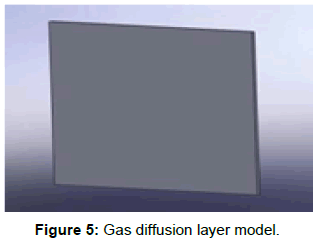 Membrane: Membrane works as electrolysis for PEMFC. It must be placed in centre between anode and cathode. Material of membrane was platinum with carbon particles. A membrane was modelled and assembled in between catalyst layers (A and C). Figure 6 shows the membrane model view. 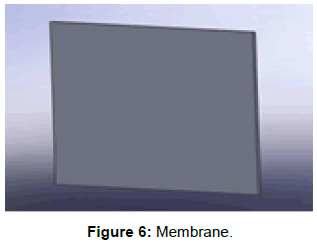 Table 1: Dimensions and zone type of the fuel cell parts.

Assembly: At last all components are assembled and mate with the help of assembly in the comment of pro-E software. Figure 7 shows the assembled model of fuel cell setup.

Working on ANSYS 14.5: The assembled PEMFC model was converted into IGES.prt format and it was imported to the ANSYS 14.5 module ANSYS WORKBENCH 14.5.

The design modeller show an import under the tree outline with a lightning bolt next to it. Press the generate button and the geometry show up in the graphics window. Figure 8 shows the importing model of ANSYA 14.5.

Computational fluid dynamics: The assembled PEMFC model was converted into GEOM x b format and it was imported to the ANSYS 14.5 module ANSYS CFD 14.5.

The design modeller show an import under the tree outline with a lightning bolt next to it. Press the generate button and the geometry show up in the graphics window. Figure 9 shows the importing of model to ansys. 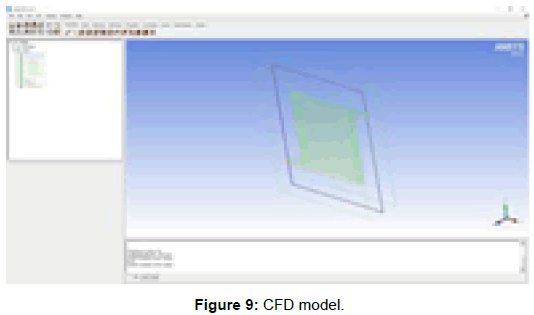 Meshing: After completing CFD volume separating and blocking, the model has pre-mesh with Cartesian type mesh. The meshing PEMFC model has shown on Figure 10. Input boundary conditions to the PEMFC model as per the below given values. The project file saved as a MESH. File for fluent software. The mesh file was imported to the ANSYS FLUENT 14.5 software. PEMFC was uploaded by using the commend DEFINE/MODEL/ ADDON/3.

The operating parameters for PEMFC at 323 K from the literature survey [7] optimum current density and power density were obtained from the temperature of 323 K and 2 bar shows on Table 2.

Power density and current density values were obtained for the input values of temperature 323 K and pressure 2 bar. The anode and cathode of mass flow rates are 4.33 × 10-7 kg/s and 3.33 × 10-6 kg/s respectively. Mass flow rate is constant for all temperature, voltage and pressure. 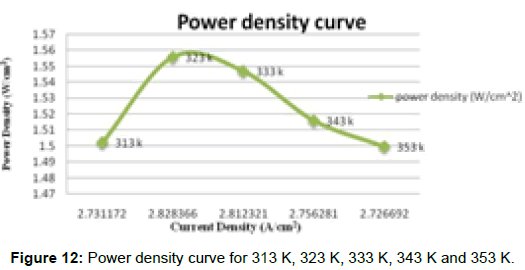 The Figure 13 shows the all residuals played in PEMFC working in ANSYS FLUENT 14.5. Working conditions are 333 K at 2 bar with same inlet conditions shows from the Table 2. 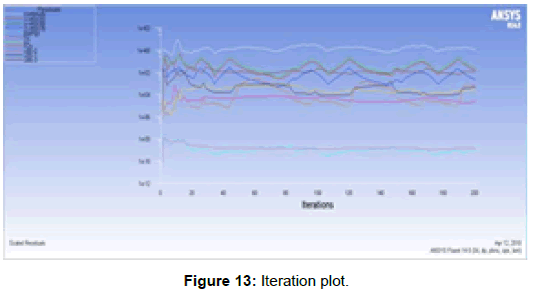 The new flow field will be design and experimental result will take in future.

Copyright: © 2018 Vivek R, et al. This is an open-access article distributed under the terms of the Creative Commons Attribution License, which permits unrestricted use, distribution, and reproduction in any medium, provided the original author and source are credited.