Periodontal Disease in Children and Adolescents: A masked Reality!

Copyright: © 2017 Shaddox LM, et al. This is an open-access article distributed under the terms of the Creative Commons Attribution License, which permits unrestricted use, distribution, and reproduction in any medium, provided the original author and source are credited.

We know that gingivitis is a common finding in the adult population as well as in the young one. Early studies already showed gingivitis affects anywhere from 40 to 60% of school-children in the United States, although higher percentages have been reported as well, up to 70% in children older than seven years of age.

Periodontal Disease in Children and Adolescents: Is it more Prevalent than We Think?

We know that gingivitis is a common finding in the adult population as well as in the young one. Early studies already showed gingivitis affects anywhere from 40 to 60% of school-children in the United States [1], although higher percentages have been reported as well, up to 70% in children older than seven years of age [2]. Thus, gingivitis is a common disease among young individuals. The problem is when gingivitis persists for too long and in certain individuals it becomes more than just marginal inflammation. Unfortunately, who will develop periodontitis is still something we cannot predict. However, periodontal disease is one of the two most important oral diseases contributing to the global burden of chronic diseases [3] and we do know that periodontal disease affects one in every two North-Americans, according to the most recent literature [4]. Chronic periodontal disease may affect up to 24% of children, whereas aggressive periodontitis is less frequent, affecting less than 1% of North-Americans and up to 2.9% of African-Americans [5]. Unfortunately, early signs of chronic or aggressive diseases are actually very difficult to diagnose, as seen in (Figures 1a-1c).

Figure 1a: Stainless steel crown (SSC) associated with initial crestal resorption on S. Although visual is not ideal on upper left SSC, area should be probed to rule out bone clinical attachment loss at this area as well. Bone levels on upper right SSCs look normal despite poor adaption on SSC of tooth B. 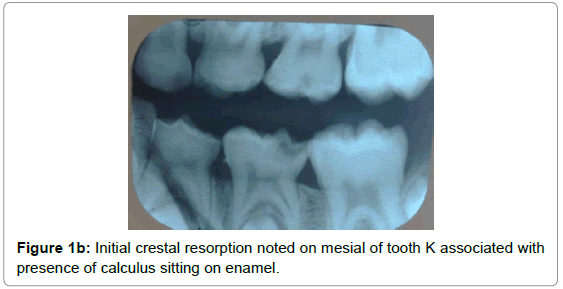 Figure 1b: Initial crestal resorption noted on mesial of tooth K associated with presence of calculus sitting on enamel.

Figure 1c: Initial bone loss on permanent dentition can be noted on distal of 30 and mesial of 19.

Why are We not Catching the Disease Earlier?

Dentists often look at bitewing radiographs from children looking for interproximal caries, not necessarily for bone crestal levels, and as mentioned above, initial signs of disease is very difficult to detect in the radiographic analysis.

Furthermore, difficulties in assessing clinical attachment levels, mainly in initial stages of the disease, already occur in the permanent dentition, especially when the gingival margin is located coronal to the cementum-enamel junction (CEJ), which is the case in a healthy periodontium, and in the majority of children/adolescents. In particular, when inflammation is present, and gingival margin may or may not be swollen, the probe penetrates into the junctional epithelium even more, sometimes past the junctional epithelium [7]. Thus, not all deeper probing depths=periodontitis! Thus, if we do not look at radiographs carefully to see if there is indeed initial signs of bone loss, such as crestal resorption and loss of bone height (greater than the 1-2 mm from crest to CEJ), the initial stages of periodontitis may go underdiagnosed until years later, when the problem is now clear in the radiographs, but also more difficult to treat (Figure 2). 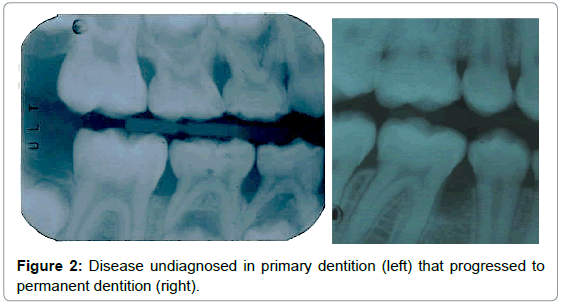 What do Dentists say about this?

A recent survey conducted as part of the dental practice based network efforts, through a quick poll of 346 general dentists, showed that 62% of dentists believe detecting gum disease in primary teeth is important but only 54% say they use a probe to diagnose the disease [8]. These dentists also reported they start probing kids anytime between 5 and 21 years of age, with an average age of 13. Among respondents, many said they probed depending on patients’ symptoms or X-ray results. However, interestingly, almost 70% of respondents believed that early periodontal disease in primary dentition in children may lead to a greater susceptibility for the development of periodontal disease in their permanent dentition.

Another survey we conducted showed that although the vast majority of pediatric dentists say they use a probe to diagnose periodontal disease (51% between the ages of 0-12 and 67% between the ages of 13 and 21), only 21% of these dentists reported carrying a periodontal probe in their examination kit. However, the vast majority of pediatric dentists in the survey showed knowledge about general aspects of the disease in younger patients, seemed interested in the topic of periodontal disease in children, and wished to receive further education on the topic.

So if we believe it is so important and we have the slightest chance of preventing periodontal disease in the adult dentition, why are we not probing children and adolescents? Does it hurt them? No! If probing pressure and positioning are performed correctly into the sulcus/ pocket, the patient should not feel discomfort with this instrument. We just have to do it right and do it frequently!

Will Early Disease Diagnosis and Treatment Prevent Periodontal Disease in the Adult Life?

A few studies show that the majority of aggressive periodontits patients diagnosed in their permanent dentition actually presented signs of bone loss in their primary dentition [9-11].

Additionally, siblings are susceptible to periodontal disease as shown by a study of families by Marazita et al. [14]. Our study mentioned above, only 6 healthy siblings in our cohort developed disease during the study (3 of them in primary dentition) and all of them had not followed up with their scheduled maintenance appointments, So the question is: could we even have prevented those from developing the disease as well with proper maintenance?

Based on scientific evidence, we know periodontal disease run in families. We also know that patient’s history, in combination with the clinical examination and other factors, forms the foundation for the proper diagnosis of the periodontal disease. However, are we asking the questions we should ask to learn about patient periodontal susceptibility? We ask questions regarding diabetes, systemic risk factors and even family history of caries, including siblings and parents, as stated in the AAPD guidelines for record keeping. Thus, why don’t we ask about family history of periodontal disease? This should be the first step in determining risk of the disease in young individuals. The rest, we learned in dental school, we just have to practice what we learned and keep our eyes open for this masked reality!