Phylogenetic Position of <em>Psittacula</em> Parakeet Bird from Enggano Island, Based on Analyses of Mitochondrial Cytochrome B Gene | OMICS International

Phylogenetic Position of Psittacula Parakeet Bird from Enggano Island, Based on Analyses of Mitochondrial Cytochrome B Gene

Copyright: © 2016 Astuti D, et al. This is an open-access article distributed under the terms of the Creative Commons Attribution License, which permits unrestricted use, distribution, and reproduction in any medium, provided the original author and source are credited.

Enggano Island is one of the outer islands of Indonesia, located in Indian Ocean, approximately 100 km South West of the mainland Sumatra Island, 5°17’ - 5°31’ S and 102° 05’ - 102° 25’ E. It is separated from Sumatra Island by marine basin with a depth of 2000 m. Biologically, it has high endemicity and a wealth of biodiversity. Based on Enggano expedition on 2015 there were many animal species that were found, including around 27 bird species. One of the birds is parrot bird; named Psittacula longicauda modesta ; a subspecies of Psittacula longicauda and as an endemic bird in Enggano Island [1,2].

Some previous authors have studied on relationships and the evolutions of Psittacula parakeet birds based on spot colors on the head [5] and molecular data [5,6]. However, there has been no philogeny research report that reveals the position of the parakeet from Enggano Island (P. l. modesta ) either by genetical or morphological character.

Mitochondrial DNA is DNA markers that have been used and recognized to have characters that can reveal the problems of taxonomic species [7]. Mitochondrial DNA consisted of 22-proteincoding genes; one of them is cyt b gene. The gene was chosen in this study because it has been used in animal to reveal taxonomic problems in Parrot birds (e.g. Groombridge et al. [5]; Kundu et al. [6]; Schweizer et al. [8]), and ease to amplify the gene by PCR.

Genetic materials in form of bloods were collected from each live Psittacula parakeet bird in its origin locations. Totally 13 bird blood samples consisted of 5 samples of Psittacula longicauda defontainei from Natuna Is., 4 samples of P. l. modesta from Enggano Is., and 4 samples of P. alexandri from Java Is. Each blood sample was preserved separately in the 96% of ethanol absolute in 2 ml tube.

DNA was extracted from each blood sample using QIAGEN DNA Mini Kit by following manufacture protocol. Then, each DNA sample was visualized in the electrophoresis process and ultravioled photo. This process was performed to check the DNA content, quality, and quantity.

From around 1100-bp of DNA fragment targets of cyt b gene, in this study we decided to analyze only 868-bp to construct NJ and ML trees using MEGA5 version4 [10]. NJ tree was performed using 1000 replicates with Kimura 2-parameters distance, and calculated all codon positions. Model Test was analysed in Mega5 version 4 software models with the lowest BIC scores (Bayesian Information Criterion) was considered to describe the substitution pattern the best, and resulted HKY+G model [11] is the best model for cyt b data in constructing ML tree in this study.

Table 1: Mean base composition in the cyt b gene sequences of Psittacula parakeets examined in the current study.

Table 2: Nucleotide substitution pairs in the 868-bp of cyt b sequences of Psittacula.

Intraspecific variations were found in the cyt b sequence data of Psittacula . Low intraspecific variation resulted very low intraspecific genetic distances/genetic divergence in the Psittacula, which ranged from 0.00% (P. l. modesta ) to 0.40% (P. a. alexandri ), while for P. l. defontainea was 0.2% (Table 4). The intraspecific differences in Psittacula not affected to the profiles of both phylogenetic NJ and ML trees, because every birds of the same species were grouped together into same clade that supported by 100% bootstrap values (Figures 1 and 2).

Table 3: Base Pairwise substitution in the 868-bp of cyt b gene sequences of Psittacula.

Table 5: Genetic distances (below diagonal) and standrat error (above diagonal) between species of Psittacula, based on 868-bp of cyt b sequences. 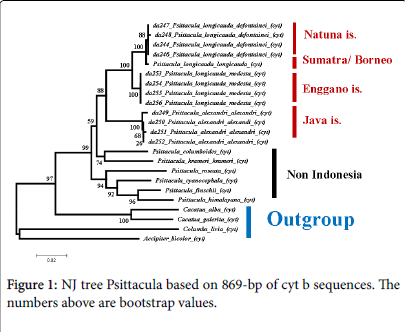 Figure 1: NJ tree Psittacula based on 869-bp of cyt b sequences. The numbers above are bootstrap values. 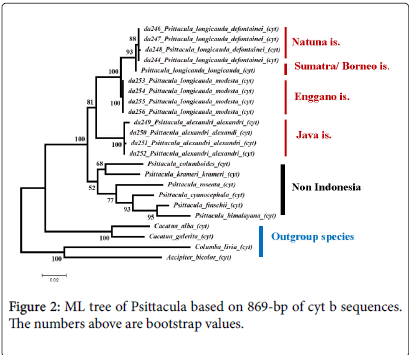 Figure 2: ML tree of Psittacula based on 869-bp of cyt b sequences. The numbers above are bootstrap values.

There is no intraspecific variation in the cyt b of P. l. modesta from Enggano Island which indicated that the four birds of P. l. modesta were identical sequences. It was assumed that it might be caused by inbreeding value [14], small population [15], habitat fragmentation [16], effect of endemism [17], or isolated population [18].

We would like to thank to staff members of the Zoological Division, Research Centre for Biology, and The Indonesian Institute of Sciences for their kind help in doing DNA analyses for the present study. Especial thank to Dr. Amir Hamidy (Coordinator of Enggano Island Expedition 2015) for his suggestions and financial supports. This research was supported by Enggano Expedition Project, R.C. for Biology, Indonesian Institute for Sciences.