Copyright: © 2013 Corrêa JCR, et al. This is an open-access article distributed under the terms of the Creative Commons Attribution License, which permits unrestricted use, distribution, and reproduction in any medium, provided the original author and source are credited.

Sodium azumolene is a drug designed to fight Malignant Hyperthermia (MH), which is characterized by genetic predisposition and triggered by the use of inhalational anesthetics. This drug is shown as a water-soluble analogue of dantrolene sodium, 30-folds more water soluble, which gives advantages for its emergency use. To our knowledge there is no analytical method for sodium zaumolene raw material or dosage form published so far. The objective of the present investigation was to develop and validate analytical methods to achieve sodium azumolene chemical identification and quantification. The sodium azumolene was characterized regarding its thermal behavior, by differential thermal analysis and thermogravimetric analysis; Visible, UV and infrared absorption. To accurately assess the sodium Azumolene content three different analytical methods (visible and UV spectrophotometry and high performance liquid chromatography) were developed and validated. All methods showed to be linear, accurate, precise and reliable. Azumolene has shown to be equipotent to dantrolene in the treatment and prevention of an MH crisis and the great advantage compared to dantrolene is better water solubility. This study has characterized the sodium azumolene and presents new analytical methods which have not been reported so far.

Malignant hyperthermia, which so far has no cure defined, is also known as malignant fever, malignant hyperpyrexia and anesthetic fever. It is hereditary (autosomal dominant) and latent, it is characterized by hypermetabolic response to volatile anesthetics (halothane, isoflurane, sevoflurane, isoflurane, enflurane and desflurane) and succinylcholine, initially from a derangement of intracellular calcium homeostasis [1-4].

It can occur at any time of anesthesia procedure and even some hours after. Its incidence has been reported with variations from 1/20.000 to 1/100.000 users of the triggering anesthetic agents cited above. The incidence of malignant hyperthermia in aesthetician procedure is of 1/15.000 in children and 1/50.000 in adults. There are studies reporting that 50% of cases occur in people less than 15 years [5-7].

Whereas the evolution of the disease can be fatal and occurs quickly, early diagnosis and specific treatment are of great importance, reducing mortality from 80% to less than 10% of the cases [8,9]. Thus, encountering the signs described for the disease associated with the use of volatile anesthetics agents, it must be considered a case of malignant hyperthermia and specific treatment protocol must be initiated [8,9]. There should be immediate cessation of the exposure to possible agents triggering of malignant hyperthermia with replacement by safe anesthetic drugs, followed by administration of dantrolene sodium or sodium azumolene, with the goal of correcting cellular metabolism of calcium, cardiac function, body temperature and respiration rate [7,10-12].

Although there is no central action, dantrolene, a hydantoin derivative, acts as a central muscle relaxant with the receptor binding site ryanodine, which acts through inhibitory mechanism [9,13]. Azumolene sodium has chemical structure, potency and efficacy similar to dantrolene sodium. It prevents or reverses malignant hyperthermia, which was confirmed by in vitro and in vivo studies [12,14]. According to Zhao and coworkers [15] both drugs are satisfactory and have equivalent applications to treat the irregular release of calcium by the endoplasmic reticulum.

The use of sodium azumolene presents advantages in relation to its branch dantrolene, since the latter shows poor water solubility and requires a dilution of 20 mg of the lyophilized drug in 60 ml water for injection. Sodium azumolene is many times more soluble in its administration vehicle than dantrolene and provides an easier and faster drug administration procedure which is necessary for emergency situations [9,16,17]. Sodium azumolene chemical reference (assigned purity of 100%) and the product as powder for injectable solution were kindly donated by Cristalia (Itapira, Brazil).

Methanol LC grade was purchased from Tedia (Fairfield, USA). Ultrapurified water was prepared in-house by using Direct-Q® water system (Millipore Corporation, Billerica, USA). Prior to use, mobile phase solvents were degassed in an ultrasonic bath for 30 min. Solvents were filtered through a 0.45 μm membrane filter.

All LC, UV and VIS spectrophotometric methods were validated according to the International Conference on Harmonization (ICH) guidelines [18]. The following characteristics were considered for validation: Linearity, range, accuracy and precision.

The limits of detection (LOD) and quantification (LOQ) were calculated as 3 and 10 σ/S, respectively, where S is the slope of the calibration curve and σ is the standard deviation of y-intercept of regression equation [18].

Chromatographic analysis was performed in isocratic mode. Mobile phase consists of methanol-water (75:25, v/v, pH 3.0 adjust with formic acid) at a flow rate of 1 mL/min. The injection volume was 20 μL and the detection wavelength was 340 nm. The retention time of sodium azumolene was 4.25 min (Figure 2). All experiments were performed at room temperature (25°C) and the total area of peak was used to quantify sodium azumolene. Figure 2: Chromatogram of sodium azumolene diluted in mobile phase at 10.0 μg/mL and monitored at 340 nm.

The UV spectrum of sodium azumolene was obtained using an aqueous solution of this drug at 10 μg/mL. The absorption peak could be observed at 339 nm. This wavelength was used for the drug determination.

For the visible determination a purple color was obtained by addition of 0.1% chloranilic acid in a sodium azumolene solution prepared with acetonitrile at 10.0 μg/mL. This coloring reaction was described by Melby and coworkers [19]. After the staining process the visible spectrum of the solution was obtained and an absorption peak could be observed at 507 nm.

Charge transfer reactions can be ideal for visible analysis methodology. The chloranilic acid is an acceptor of electrons and it is widely used for photometric analysis in visible region of spectre to penicillins [20], cephalosporins [21], antimalarials [22], antifungals [23] and propranolol [24]. In a literature search of sodium azumolene it was not found the association of the drug with the chloranilic acid.

The mix of chloranilic acid and acetonitrile shows a VIS absorption peak near to 390 nm. However after addition of this mix to sodium azumolene the color immediately changes from yellow to purple and the absorption peak also changes to 507. This reaction may be explained by the occurrence of ion pairing [25,26].

Good linearity was obtained at the concentration range tested. It was evaluated by the analysis of variance (ANOVA) and results showed regression statistically significant (Fcalculated<Fcritical; P=0.05). The equation of the curve was y=44299X+137924 with a good coefficient of determination (r2=0.9990).

The precision of the method was determined by repeatability (intra-day) and intermediate precision (inter-day) and was expressed as R.S.D. (%) of a series of measurement. The repeatability test shows R.S.D. equal to 0.08 and the inter-day variability was equal to 1.23% (Table 1). The accuracy of the method was determined by the mean recovery, by adding standard to sample. The mean result was 98.14 % (Table 1) indicating an agreement between the true value and the value found.

LOD and LOQ were determined based on the standard deviation of the response and the slope, based on the calibration curve [18], and the values were 0.95 and 2.89 μg/mL, respectively (Table 1).

To evaluate the robustness of the proposed method low and deliberate changes were made on the flux rate of mobile phase. Sample and standard solutions were submitted at the following flux rate 0.9; 1.0 and 1.1 mL/min. No interference over assay test was found.

The developed UV spectrophotometric method has an easy procedure; moreover it is fast and low cost. The UV method shows to be linear at the concentration range tested (7.0 to 12.0 mg/mL). The equation of the curve was y=0.0868X–0.0425 with a good coefficient of determination (r2=0.9995). The validity of the linearity test was evaluated by analysis of variance (ANOVA) which shows the statistically significance of the test.

The precision of the method was determined by repeatability (intra-day) and intermediate precision (inter-day) and was expressed as R.S.D. (%) of a series of measurement. The result obtained shows R.S.D. equal to 0.83%, indicating good intra-day precision. Inter-day variability was calculated from assays on 3 days and shows a mean R.S.D. of 2.22% (Table 1). The accuracy of the method was determined by the mean recovery. The mean result was 98.10% (Table 1) indicating an agreement between the true value and the value found. The LOD and LOQ were calculated at the same way used for LC method. Their results were 0.24 and 0.73 μg/mL respectively.

At the same way of the UV method, the developed VIS method is fast and low cost. It shows to be linear at the concentration range tested (8.0 to 13.0 μg/mL). The equation of the curve was y=0.0255X–0.0257 with a good coefficient of determination (r2=0.9970). The validity of the linearity test was evaluated by analysis of variance (ANOVA) which shows the statistically significance of the test.

The precision of the method was determined by repeatability (intra-day) and intermediate precision (inter-day) and was expressed as R.S.D. (%) of a series of measurement. The result obtained shows R.S.D. of 0.73% (Table 1). Inter-day variability was calculated from assays on 3 days and shows a mean R.S.D. of 0.88% (Table 1). The mean recovery found was equal to 98.63% (Table 1). The LOD and LOQ values were 1.26 and 3.82 μg/mL respectively. Figure 3: Infrared spectrum of sodium azumolene sample (A) and standard (B) prepared in KBr. 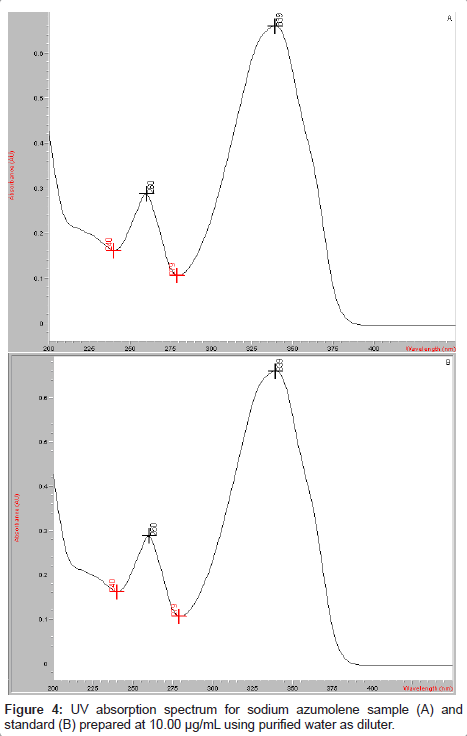 Figure 4: UV absorption spectrum for sodium azumolene sample (A) and standard (B) prepared at 10.00 μg/mL using purified water as diluter. Figure 5: Overlay of visible spectrum (350-800 nm) of sodium azumolene sample and standard prepared at 10.0 μg/mL using a 1.0% of chloranilic acid in acetonitrile as diluter.

The extinction coefficient was determined by measurement of the spectrophotometric absorbance at 339 nm of sodium azumolene aqueous solution. The result was equal to 0.246 M-1.

Moreover, sodium azumolene sample and standard were evaluated for its thermal behavior. A simultaneous differential scanning calorimetry (DSC) analysis and thermogravimetric (TG) analysis were made in atmosphere of oxygen and heating rate of 20°C/min. The results are shown in Figure 6. Figure 6: TG and DTA curves for sodium azumolene sample (A) and standard (B). The results for all sample tests (IR, UV, VIS and thermal) were consistent with the properties and concentrations of the sodium azumolene standards. In addition, sodium azumolene sample was evaluated using the three validated methods. The assay results from all methods were similar (Table 2).

Table 2: Results of the determination of sodium azumolene applying the three validated methods.

All validated methods showed to be precise, accurate and linear at the concentration ranges tested. The chromatographic method is the most expensive method, since it requires special equipment and expensive solvents. The UV-VIS spectrophotometric methods are easier, more economical and faster than the LC method, however the LC-method is more precise and can readily identify interfering peaks.

For routine quality control of medicines, it is essential to employ well-characterized, fully validated analytical methods to obtain reliable results that can be satisfactorily interpreted. The proposed methods were used successfully to investigate the sodium azumolene content. All methods are simple and efficient; and they were validated showing accurate and excellent linearity and precision characteristics.

Our study leads to conclude that the three validated method can be used to determine sodium azumolene and applied as quality control tools. The choice of the method to use should be made considering cost, simplicity, equipment, solvents, speed, and application to large or small workloads.

The authors wish to thank the pharmaceutical company Cristalia (Brazil) for the supply of the raw material and thank the Fapesp, CNPq and PADC – UNESP to financial support.